I've always kept Meall nan Tarmachan for a 'rainy' day or more to the point to keep in my back pocket when stuck for something to do in the Lawers range. This is not becuase I thought it was any less of a walk than the others in the range, but because it sat out on its own off the main ridge. I was meeting my mate from Manchester for a long weekend of munro bagging and as we were a bit on the unfit scale I wanted to chose some hills that werent too demanding. The first day I chose this route as it starts well up the hill at 485m from the Ben Lawers reserve car park. I was also meeting 2 more mates doing the Rob Roy Way over the long weekend and Killin was one of their stops....therefore Tarmachan was ideal.

I flew up Thursday evening, picked up a hire car and drove to Cruachan Farm campsite, near Killin. A pretty good campsite with warm showers, clean toilets and plenty of space to camp. My mate drove up from Manchester and managed to get there first. We pitched our tents and basked under the scottish sun. The forecast for the weekend was sun, sun, sun! Fantastic!

Friday morning, my mate had to finish off some work, so needed an Internet connection. We drove into Killin, and had a stonking cooked breakfast. By the time his work was done it was nearly 10am and by the time we got to the Lawers car par it as 10.30....so you can see we were in a pretty chilled mood. By this time it was getting quite hot, so with sunscreen and hats, we set off from the car park at 608378 (or there abouts). The route to Meall nan Tarmachan is well signposted from the car park. Essentially follow a track behind a metal barrier at the left side of the car park. At the t-junction go right and at the next crossroads cross over and follow the smaller track starting to climb up the mountain. The track is excellent all the way up. You come to a deer fence and gate around 700m before the track starts to turn righ on the ridge. Route up to first cairn at 923m

You come to a cairn at 923m from which the track descends over a stile to a stepper climb up to the top of Meall nan Tarmachan. I would guess this last section might be a bit difficult in winter given the steepness. But in a sunny spring day, the climb to the stop is relatively straight forward. View from first cain at 923m with stile and steeper section 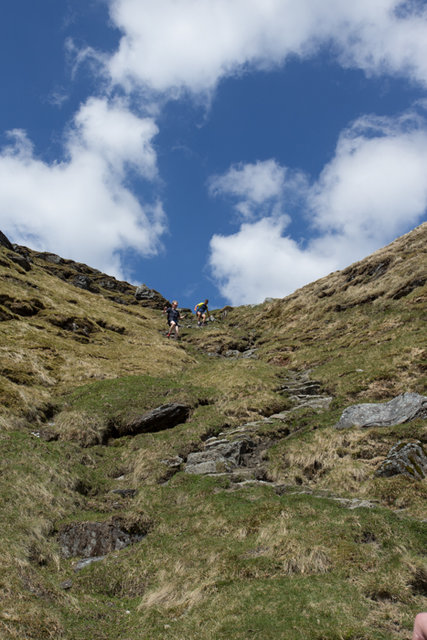 Runners comming down the steeper section near the top

On the way to the top we chatted to some runners and a photographer taking photos of them to promote the National Trust and Lawers reserve. Once at the top we had great views of the surrounding hills and the Tarmachan Ridge ahead of us. It took us about 2.5 hrs but we were going real slow and in no hurry. A bit of snow left near the top The top of Meal nan Tarmachan After a spot of lunch we descended down towards Meall Garbh, passing a small tarn on our right. We hadnt decided to do the ridge yet as we had time pressures to get back to Killin meeting the other guys who were doing the Rob Roy Way for dinner. Just before the steeper ascent to Meall Garbh a track descends left (south) down the southern ridge of Meall Garbh. This was an easy option to descend if we werent doing the ridge. The Tarmachan ridge from Meall Garbh We climbed up the small climb to top of Meall Garbh, and had a look at the ridge and intended route. Looking at the time if we decided to do it we would finish around 6pm (not ideal if meeing folks in town). So instead we both chose to retrace our steps and go down the south ridge. This is an easy walk that descends down to the quarry track. Once on the track turn left to go through a reserve gate and follow the track back to the crossroads at the start. Turn right to lead back to the car park. Stile and gate on Quarry track

Stile and gate on Quarry track A good trackk all the way back to car park Reservoir in the distance

Although bagging the Munro was achieved, the whole ridge should really be climbed to get the full appreciation of the walk. We had ideal weather but time was against us. Looking at the ridge I think I would start from the west first as all the scrambling sections are on the western slopes. Therefore climbing them would be easer than descending them.....just a thought.....I'll leave it for another time. And did we get there in time for dinner? As it turned out doing the Rob Roy way in 4 days was turning out a bit of a mission. The guys didnt arrive in Killin till 8pm.....doing over 20 miles a day. Ah well.....at least we got a table and did manage to catch up on all the goss. After a pint or 3 (for me) my mate drove us back to campsite and had a good kip for our next days hills....Stuch an Lochan and a touch of wild camping. In the end Tarmachan is a great and relatively easy hill to do and the option to make a good circular route is there if not too keen on the exposed ridge bits after MEall Garbh. As least i got a good recce for next time!

Nice day for it

Like you, I've yet to walk the full ridge having approached from the north on a different route - cheers

I love Tarmachan in any of it's robes (spring, summer, autumn or winter). It is fairly local so give quick and easy access to the mountain.

Good report too. Glad you went along the ridge as it is a beautiful way to add to your day..

Do you mean a Lochan ?

Ha...yes thats what happens when spending the weekend with a mancunian!