Munros One Hundred and Sixty Five to Sixty Eight

Munros One Hundred and Sixty Five to Sixty Eight


Monday, 28th. May, 2018:
Steve Chalk and I had spent Sunday wandering over the Ben Lui hills and had just about turned in for the night in Tyndrum when Alex, an ex-student of ours, turned up with tales of missed trains from London, expensive taxi rides and a final road walk from Crianlarich. It didn’t take much, though, to persuade him to get his head down too as we were hoping to have a relatively big day out on Bank Holiday Monday.
The rough semi-circle of four Munros bounding the headwaters of the River Ba provides just such a big day out. Above Ba Bridge (on Caulfeild’s Military Road of the early 1750s – now the West Highland Way) there are over twenty square kilometres of desolate, remote and little visited corries walled in by a high watershed that cries out to be traversed by any active hillwalker – a logical circuit which makes sense of what is a complex range of hills and which, especially on the rare occasions (like this bank holiday) when temperatures topped 25ºC, is quite testing.

our_route.gpx Open full screen  NB: Walkhighlands is not responsible for the accuracy of gpx files in users posts
The circuit, necessarily, starts at the closest access point – the small car park at the Loch Ba viewpoint on the A82. Alex, Steve and I were, therefore, obliged to plod three kilometres over the moor to and from the abandoned Ba Cottage at the beginning and end of the day – but a reasonable track and the very dry conditions underfoot made this easier than it might have been. As a result, nine o’clock in the morning saw us heading up past Ba Cottage in the sunshine, trying not to disturb some walkers on the West Highland Way who had clearly taken advantage of this remote location and the wonderful weather to enjoy a brilliant overnight camp. The relatively gentle slopes flanking the Allt Creagan nam Meann took us to a col on the south east spur of Meall a’Bhuiridh and a sun-baked plod up the ridge above took us, in turn, to the intrusive detritus of the skiing industry a few tens of metres short of the summit. Without a deep covering of snow, the markers, the signs and the rusting ski tows of this seasonal sliding fest just look redundant and ugly – although the summit itself was mercifully free of such rubbish. Me on the summit of Meall a'Bhuiridh At this time of the morning, the view was still crystal clear and it was wonderful to work round the horizon identifying as many peaks as we could. The next hill, however, beckoned so we headed off south west down to a bealach separating Meall a’Bhuiridh from Creise and Clach Leathad and climbed the opposite slope, pausing only to grab some ice from remaining snow patches to cool our heads and necks. We weren’t the only ones; a snow patch in Coire an Easain to the north of Clach Leathad was crowded with overheating ptarmigans. We encountered our first people on Creise but, once we turned south west for the Bealach Fuar-chathaidh, both the paths and the people who make them faded away. 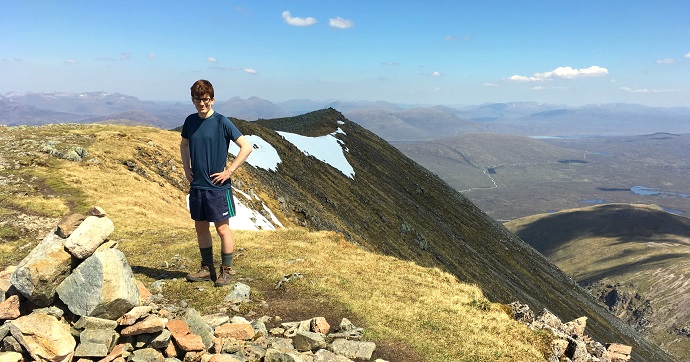 A steep descent brought this remote bealach underfoot and there followed a long, stepped ridge (Aonach Mor) which finished in a meadow at around 950m before climbing onto the distinctive top of Stob Ghabhar, just 140m higher. The three of us on Stob Ghabhar

To the east of Stob Ghabhar, the ridge narrows to the separate top of Aonach Eagach before it can be left on its north side for a steep descent to a bealach and a final climb onto Stob a'Choire Odhair; despite some complexity, this linking ridge is easy enough under summer conditions because many people climb these two Munros together and a well-worn path exists between them.
Once on our final summit, all that remained was a final descent down the steep Coire Odhar, a traverse across a mercifully dry stretch of moorland and six kilometres or so of track walking back to the car. By the time we reached it, though, we had been out for the best part of twelve hours.