Munros One Hundred and Sixty Nine to Seventy

Munros One Hundred and Sixty Nine to Seventy


Tuesday, 29th. May, 2018:
After spending Sunday and Monday on a couple of big, sun-scorched tramps around Ben Lui and the Blackmount, Alex, Steve and I headed over to Skye where a couple of mates (Patrick and Tim) were attempting a traverse of the main ridge; the weather was perfect. We'd agreed to meet them at a planned bivi in Coire a'Ghrunnda so late afternoon saw the three of us heading up from Glen Brittle with me intending to combine offering moral support to Patrick and Tim with climbing the range's two southernmost Munros.
The corrie provides a beautiful (and high) jumping off point for these hills and, after putting up tents and leaving the bulk of our kit behind, Alex and I headed up the straightforward slopes to Sgurr nan Eag. Once we hit the ridge, the views were outstanding with Eigg and Rum floating on the southern horizon beyond Gars-bheinn and miniature yachts crowding into Loch na Cuilce. Me, looking rather sunburnt on the summit of Sgurr nan Eag

Turning back north to head towards Sgurr Dubh Mor, the views were, instead, dominated by Sgurr Alasdair and Sgurr Thearlaich and the ridge led us to Caisteal a’Garbh-coire quite quickly. Having not read up on our route in advance, we pulled over this (at about moderate) and were then forced to reverse the moves when confronted with a forty foot drop off, a fair bit of abseil tat and the fact that we’d left the rope down in Coire a'Ghrunnda. At this point, potentially short of daylight, Alex turned downslope for the tents but I chewed through a Mars Bar and a litre of water before bypassing Caisteal a’Garbh-coire on the east, clambering up Sgurr Dubh an Da Bheinn and completing the linking ridge to Sgurr Dubh Mor. It was brilliant to be moving fast over these rocky hills as the sun moved round the horizon to sink towards Sgurr Alasdair. The return over Sgurr Dubh an Da Bheinn was relatively simple and I descended over boulders from the bealach between it and Caisteal a’Garbh-coire to meet Patrick and Tim as daylight faded. They were setting up their bivi on the shores of Lochan Coire a'Ghrunnda having left Elgol by boat at around 2.00.pm. and traversed Gars-bheinn and Sgurr nan Eag from Coruisk. The five of us spent a pleasant evening together brewing up by the lochan’s outfall.

our_route.gpx Open full screen  NB: Walkhighlands is not responsible for the accuracy of gpx files in users posts
Postcript:
The next morning saw Patrick and Tim away at around 5.00.am. - we caught up with them later that evening for a beer at the Sligachan after their attempt ran out of puff after Bruach na Frith - and we stirred ourselves to leave the coirre at around 7.00.am. for a less ambitious day. Heading up onto the col between Sgurr Sgumain and Sgurr Alasdair, we wandered broadly north in wonderful conditions, scrambling over the peaks and using the rope both to abseil off the north end of Sgurr Thearlaich and overcome the Inaccessible Pinnacle. I would probably have enjoyed it more if I hadn't been carrying a tent, sleeping bag, mat, stove, fuel, food and a rope - but, as some of the photos show, it was a wonderful day. 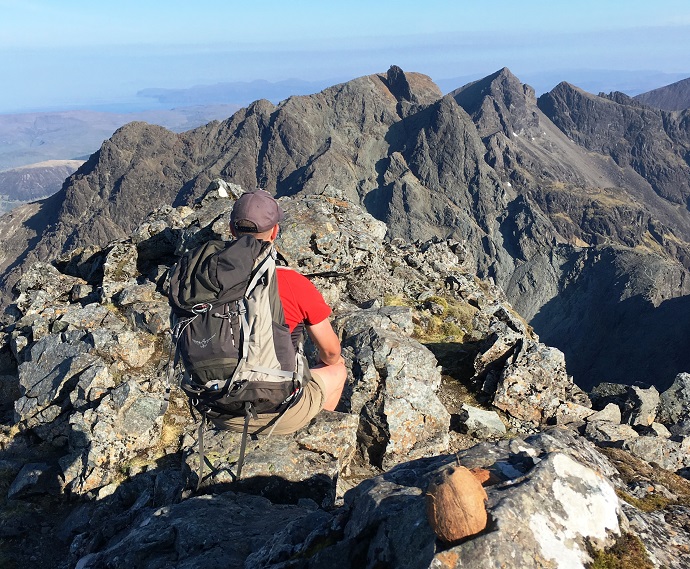 Steve (and a coconut) on top of Sgurr Alasdair 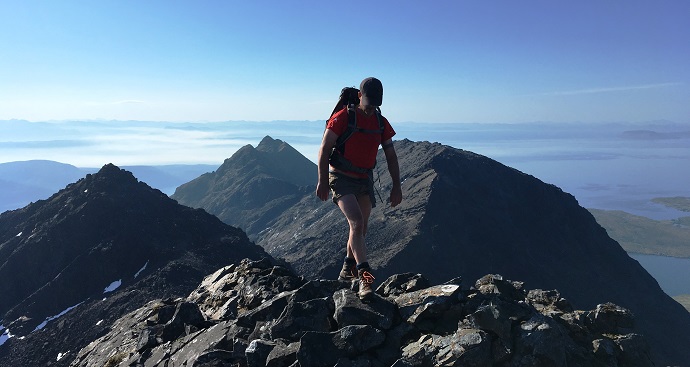 Steve on the summit of Sgurr Thearlaich 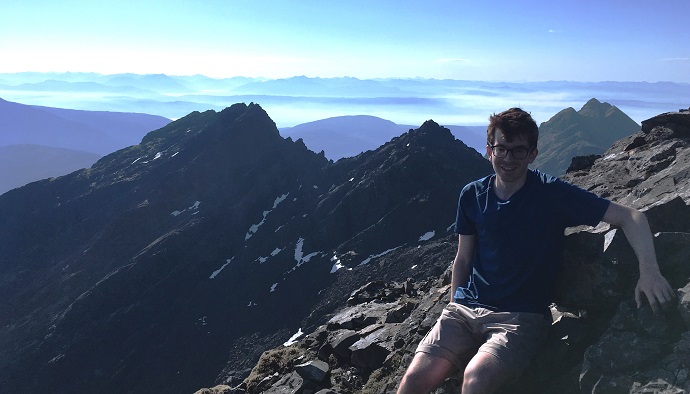 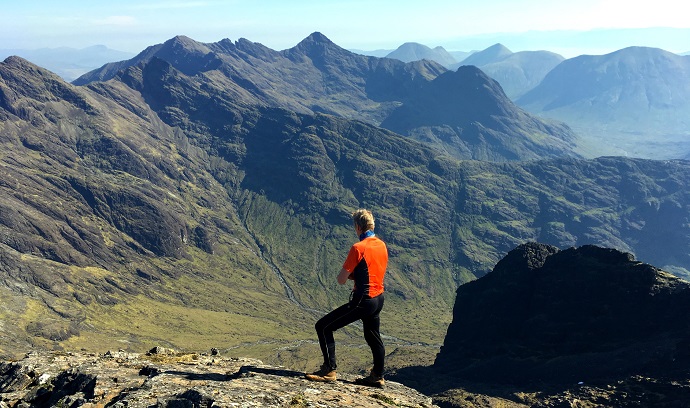 Me on Sgurr Mhic Coinnich 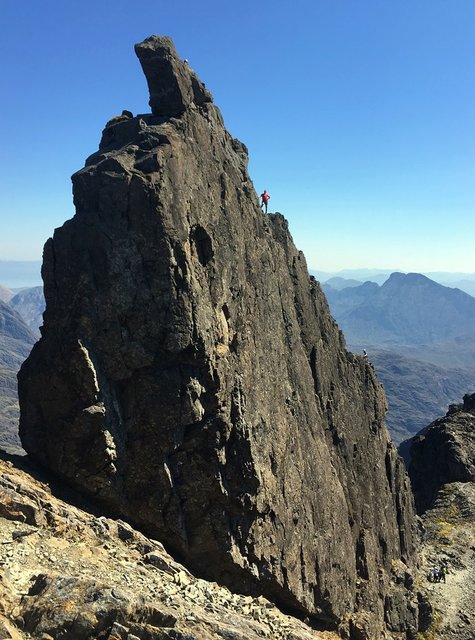 Steve on the Inaccessible Pinnacle

It was certainly a contented trio which descended to Glen Brittle in the early afternoon and headed round to the Sligachan campsite. 
our_route.gpx Open full screen  NB: Walkhighlands is not responsible for the accuracy of gpx files in users posts
Next Report: https://www.walkhighlands.co.uk/Forum/viewtopic.php?f=9&t=81255