Day 2 - Sunday 27th May 2018
Today we planned to start doing the set of six Marilyns done by robertphillips in one day in 2014, and see how far we would get before meeting up for dinner with one of Jaywizz's friends who lives in Dumfries

I had read weaselmaster's recent report, and following his suggestion we parked just past the 'No Admittance' signs for both vehicles and people at NX 9180 7163. 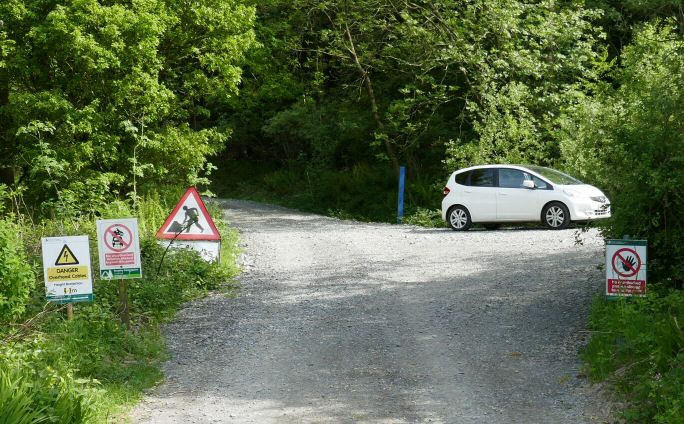 After 400m of track we left it and headed easily uphill through mature forest to reach the overgrown track marked on OS maps. 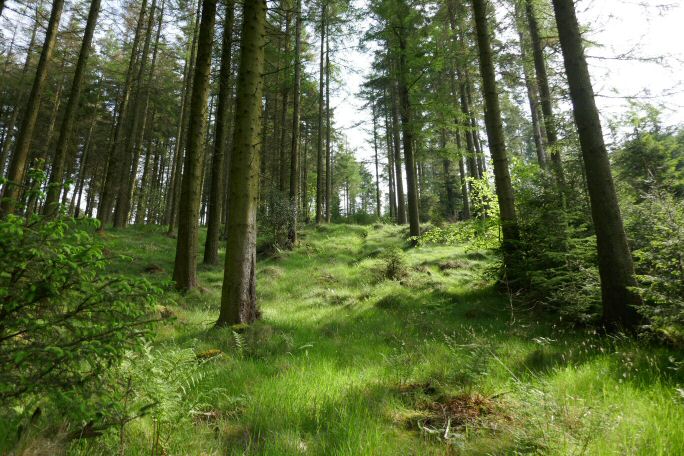 Easy going through the trees

We followed it south and soon found ourselves on a mountain bike track that was reusing the route. A little further on we had a choice of taking a break leading uphill through the forest, or continuing to contour along the track. We chose to head up. Apart from negotiating a few fallen trees it was reasonable going. Near the edge of the forest we found ourselves back on a MBT which led us upwards through a clear-felled area to a T-junction of routes. 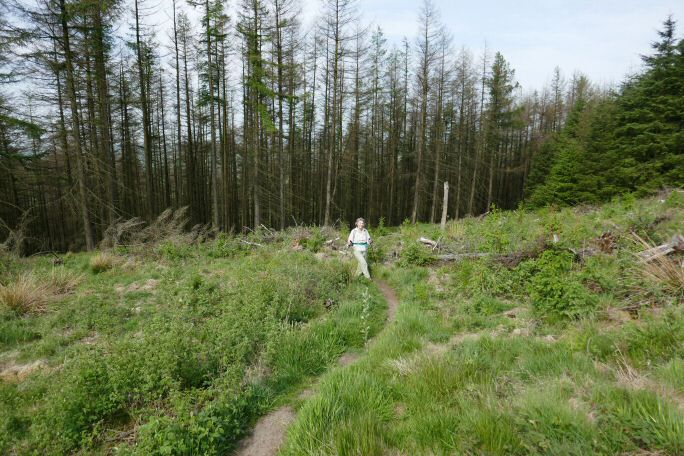 On a black(?) mountain bike track

From the junction the small summit cairn was just visible about 25m ahead of us. 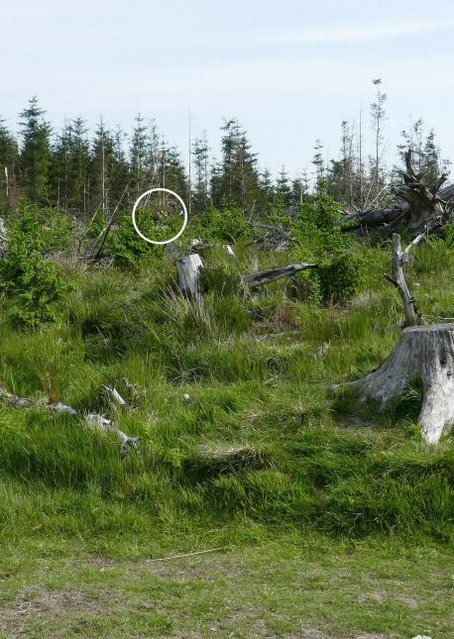 The summit cairn (circled) from the track junction

A hop, skip and jump through stumps, brashings and new planting took us there for the obligatory summit photos. 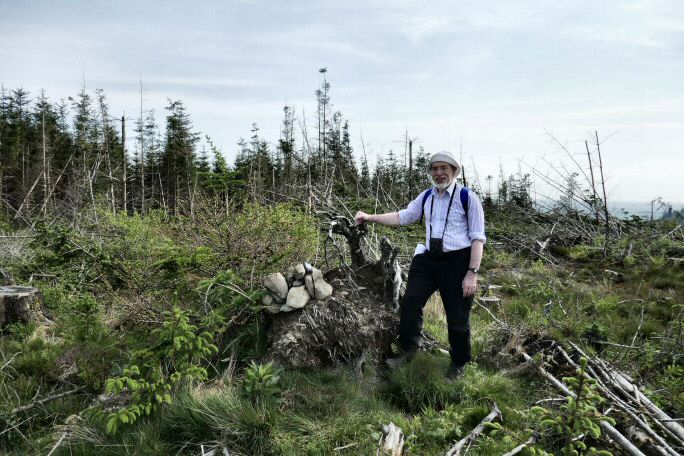 On our return we followed the MBT which did lead back to join the one along the overgrown track. While on it two cyclists shot past at high speed followed by a third who warned us of a fourth. 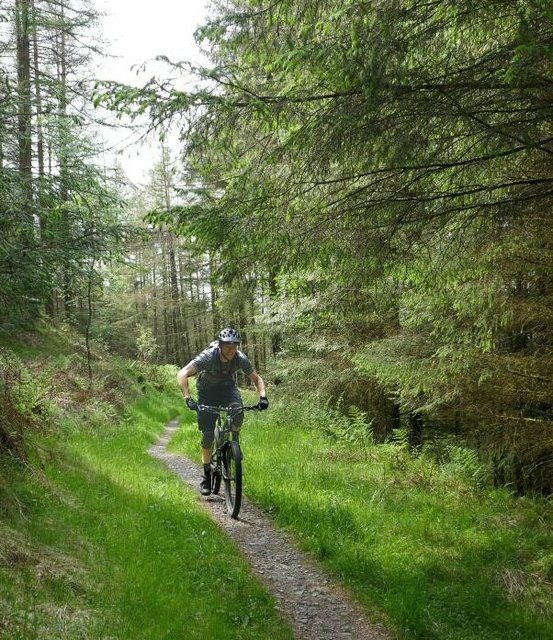 The rest of our return to the car was uneventful. I later found information on-line about MBTs on the Forestry Commission Mabie Forest website. This has a map of some of the tracks, but not those that go past the summit. Perhaps that is because those runs would be graded as blacker than black? It was certainly far steeper than I'd want to attempt on my bike in either direction.

Bennan Hill: 2.6km, 180m, 1.2hr
Twenty five minutes after leaving Woodhouse Hill we were parked by a small wood and a signpost for 'Turners Monument Circular'. Apart from that we noticed no other direction signs or even a path for the route.

A steady plod in the heat took us across the field through a gate and then along a series of narrow paths through the heather and past a cairn to the top. We met a snare lying across the path which I wrapped around its post. There were many other short posts where others must have been removed. I assume the one we found had been missed. 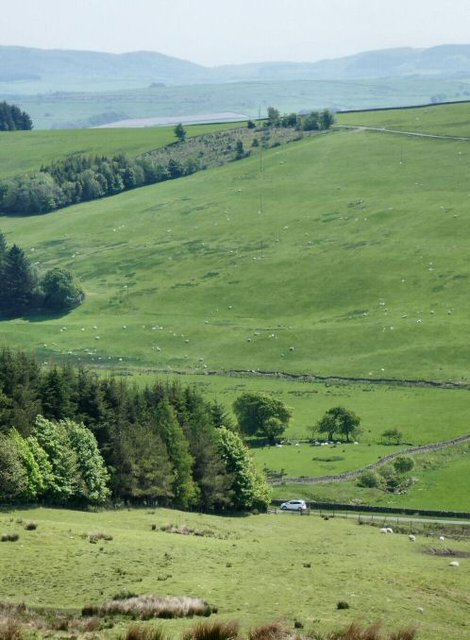 Turner’s Monument is an impressive marker for the 1841 grave of John Turner, a horn spoon and fork maker. The story goes that he'd dug it himself after predicting when he was going to die. He also ordered and paid for his gravestone and its erection on the summit. 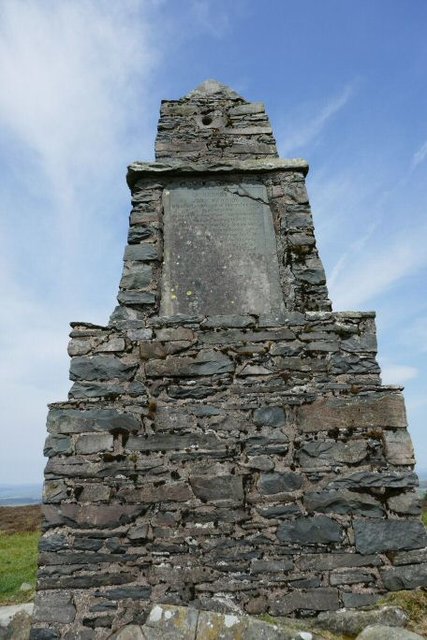 On our way to our next hill we passed a Henry Moore sculpture - 'Two Piece Reclining Figure No.1' (1959). To me it looks more like a large dog with its owner. It is one of the sculptures that made up the Glenkiln Sculpture Park. Most were removed a few years ago when one of the bronzes was stolen. 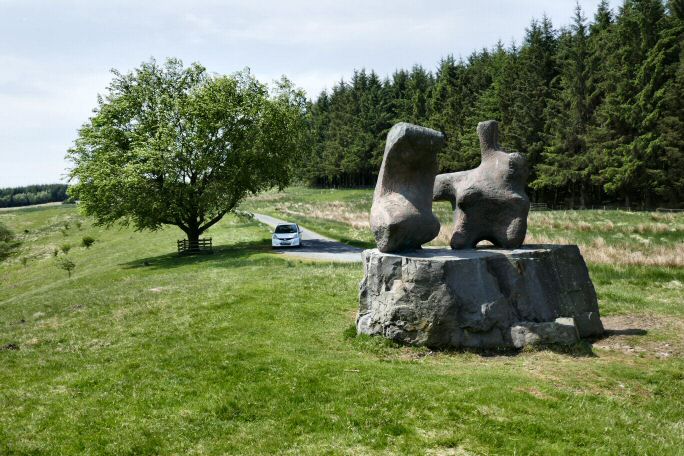 Bishop Forest Hill: 3.0km, 205m, 1.5hr
One point of interest was that my SatNav wanted us to take the long way round the hill to get to Marglolly Bridge, our start point. Somehow the road between Cornlee Bridge and Marglolly Bridge was missing from its repertoire. Another reminder that checking the decisions of your electronic helpers isn't being paranoid. They really are out to get you!

Parking was by the cattle grid just over the bridge and far enough away from the gate to not obstruct its use. Directly opposite the junction we took a path/ATV track to 335m where it appeared to head off in the wrong direction. 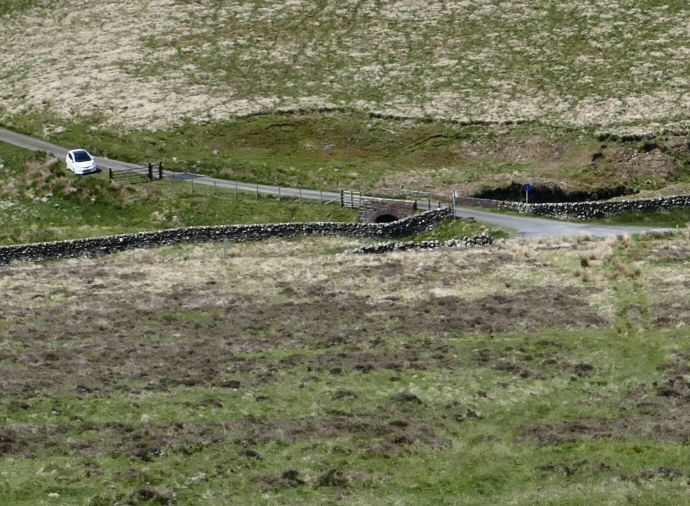 Looking back at Marglolly Bridge and the car by the cattle grid.

A few minutes wading through the heather arrived at another track that does lead past the bottom of the final slope up to the summit, though doubting that we diverted over the intervening bump. From the track a path led us up to a windswept summit where we sheltered behind the cairn and tried to identify the summits displayed around us. 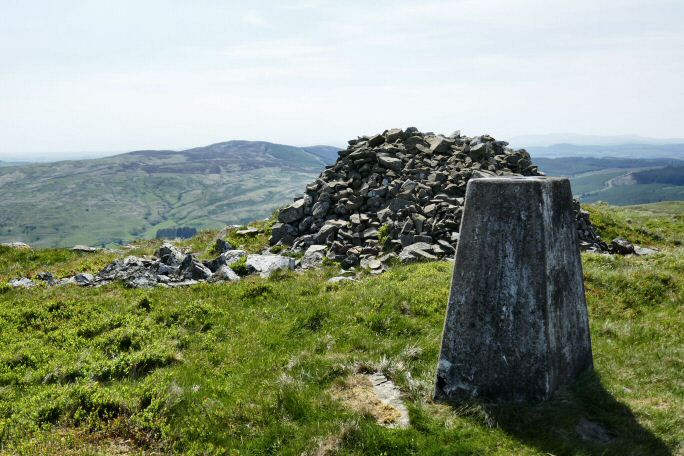 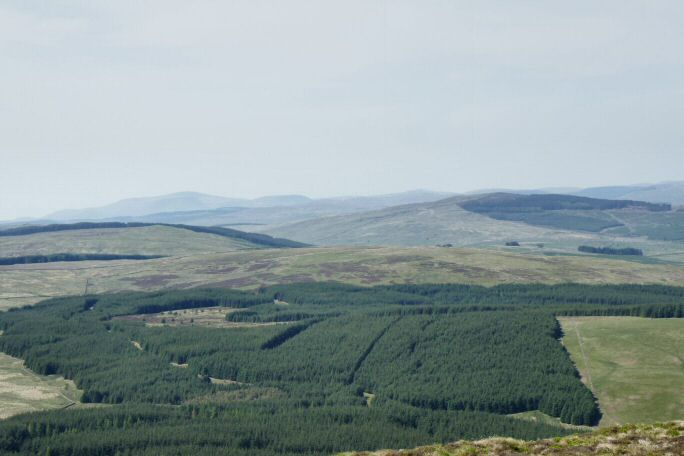 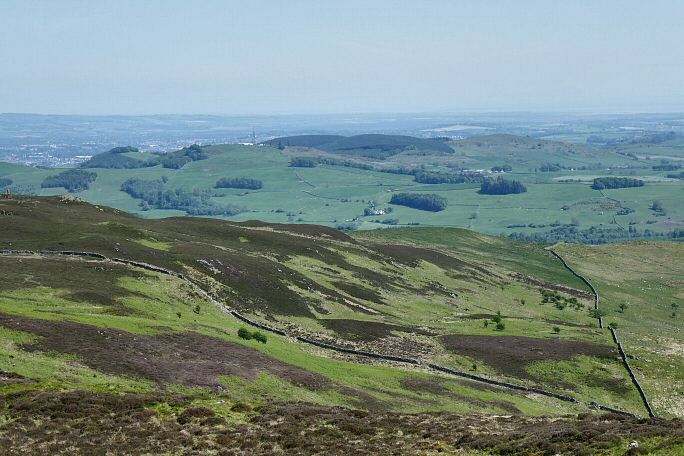 See Morris Hill and its antennae with Dumfries behind

We returned along the tracks and proved the two we had used on the way up did not appear to connect. As we descended, Jaywizz found a fresh sandwich wrapper beside the path, and we spotted a single figure descending well below us, although we’d not seen anyone higher up. Perhaps he accidentally dropped it. Anyhow we collected it to dispose of later.

Our fourth and last hill of the day was the shortest. We drove up the access track through the Riddingshill farm buildings to near a locked barrier at NX 9095 7774. 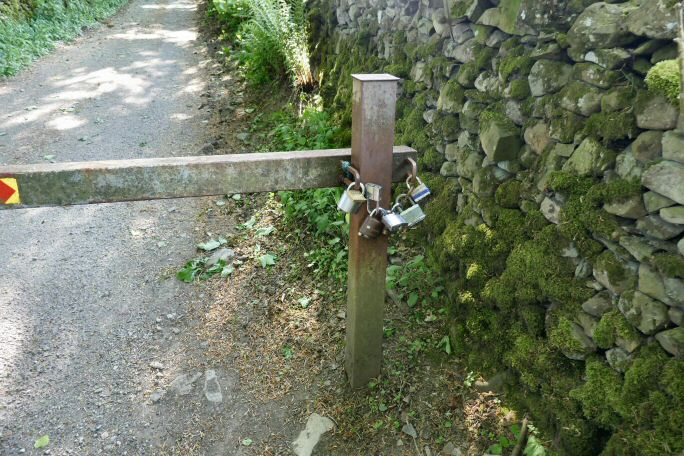 So far the day's walks had been devoid of cattle. Here there were plenty on both sides. A bull two fields away roared from start to end of our walk, and as we walked up the track a field of young friskier bulls was separated from us by what Jaywizz considered a flimsy fence. Nearing the top a cattle grid led into an open field, fortunately populated only by sheep. From the top we had a fine view of Dumfries and the other summits of the day. 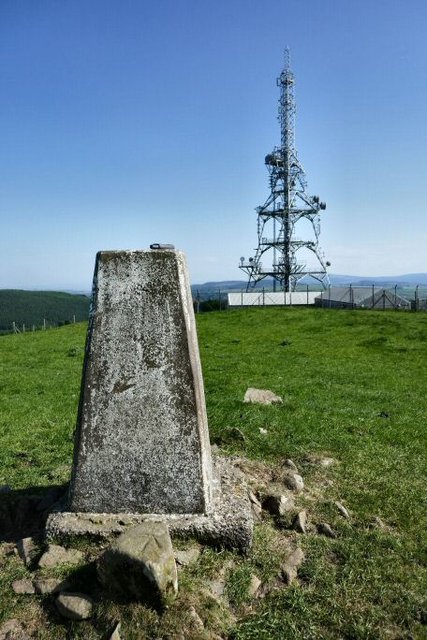 The summit with Woodhead Hill somewhere behind the communications paraphernalia 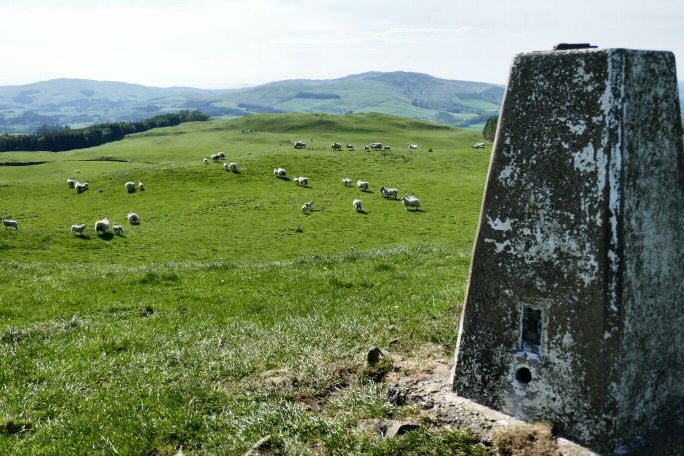 Seven summits done and three more to do. Did we manage? - continued in Part 3!