A day out with Paddy, Sgurr nan Gillean

A day out with Paddy, Sgurr nan Gillean


We moved further north to Balmacara on Thursday 24th, we had a date with Paddy to give Gillean another go on the 25th and for a change the weather was looking good.

Sgurr nan Gillean had proved to be a hard nut to crack for us, it was our last munro on Skye, our first attempt was two years ago, we were with Paddy then, he'd taken us to the summit of 10 of the munros on the ridge that week but had to abort Gillean due to bad weather, Paddy thought it was too risky especially on the exposed bits, the wind and rain was just too vicious to be safe.
We had another go last September and, again, same senario, very high winds, cold and soaking wet, we played safe again.

This time it was a last minute decision to give it another go, we were going to leave it untill later in the year but on the off chance I spoke to Paddy to see if he had any free days in May, preferably the 25th, he got back to us almost immediately to say he was free that day so he was booked, this was April and to be sure we managed it this time I asked if he'd mind taking us up the more civilised way just to make sure, he's not a fan of the so called "tourist route" but, just in case of nasty weather, he said "no problem, third time lucky folks"

Friday dawned and we had clear blue skies and no wind in Balmacara, perfect.
We hurried our breakfast, loaded the car with boots and rucsacks and set off for Sligachan to meet up with Paddy for 09.00.

There was a bit low cloud floating around the mountains on Skye, the only one to have a significant layer was ours, what!, after all this brilliant weather we were the only ones for miles to be in the clag, well at least it was warm.

We arrived at Sligachan at 8.40, plenty of time to get sorted, 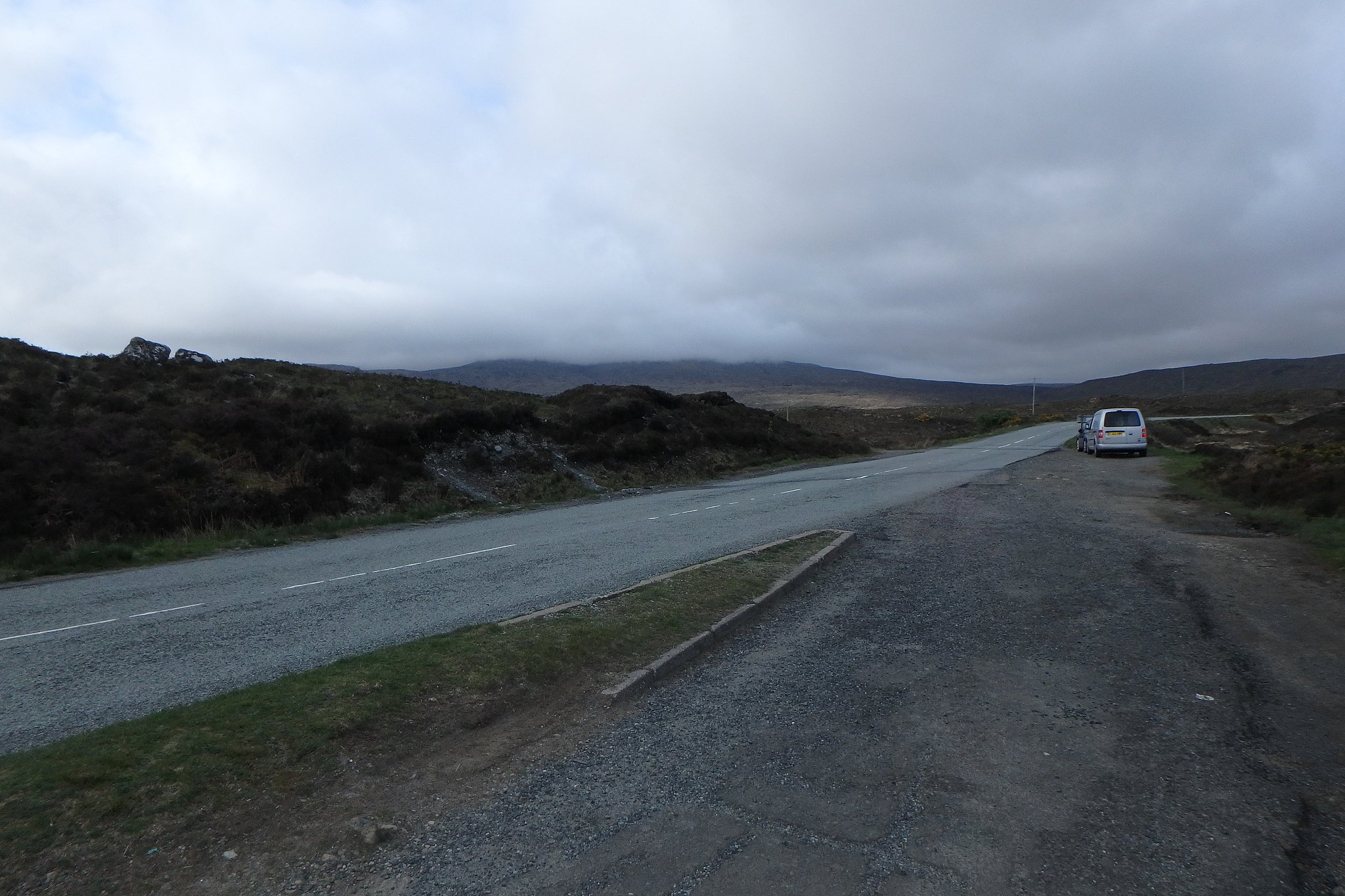 Paddy arrived bang on time in a nice new L200 a present to himself and a change from the VW vans he'd favoured in the past. With helmets, harnesses and ropes distributed we set off to tackle our nemesis.

As we were gaining height all the surrounding mountains, Blabheinn, Glamaig, Marsco etc were all losing their cloudy hats, Mr Gillean, however, was stubbornly holding on to his. 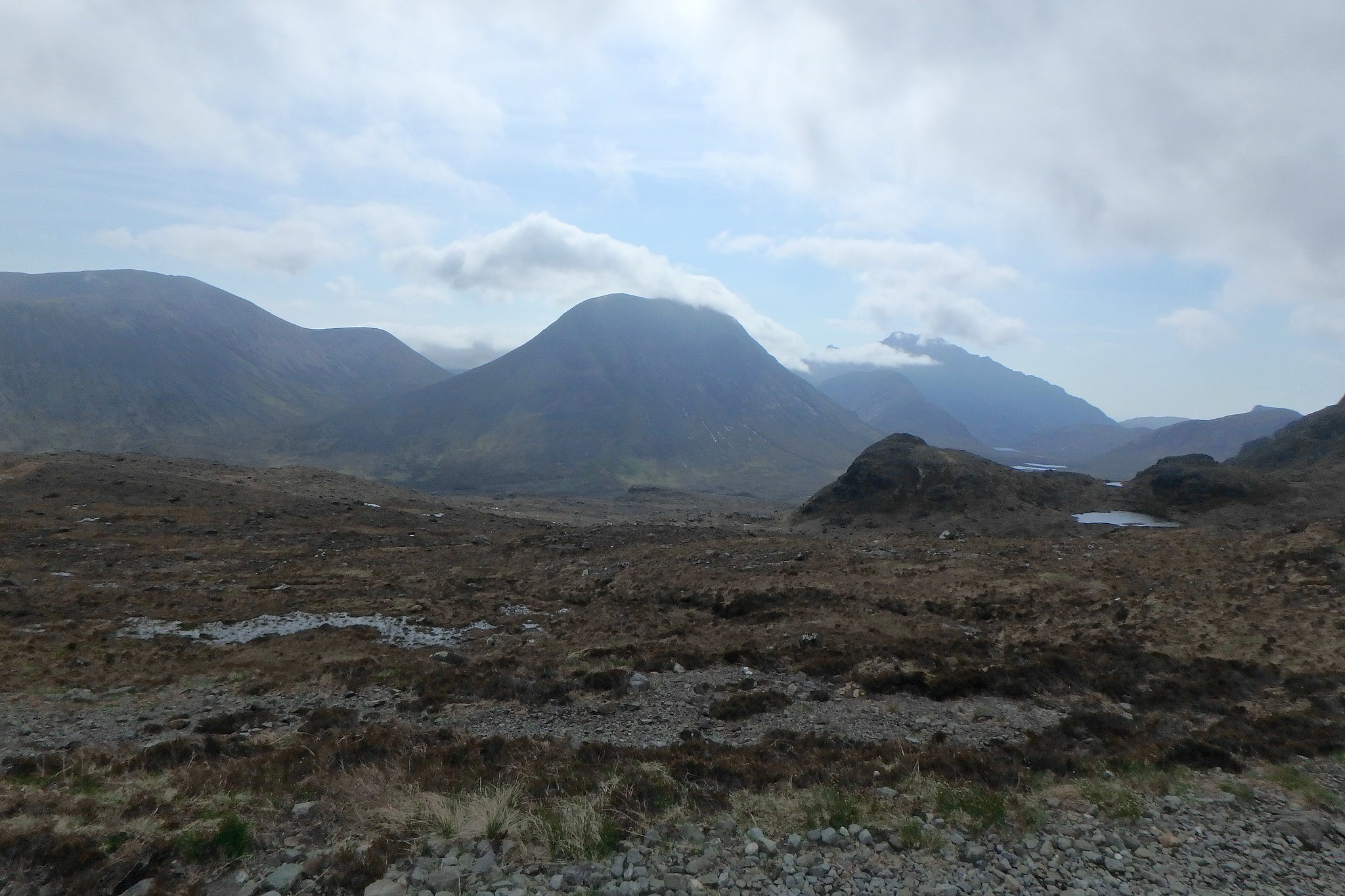 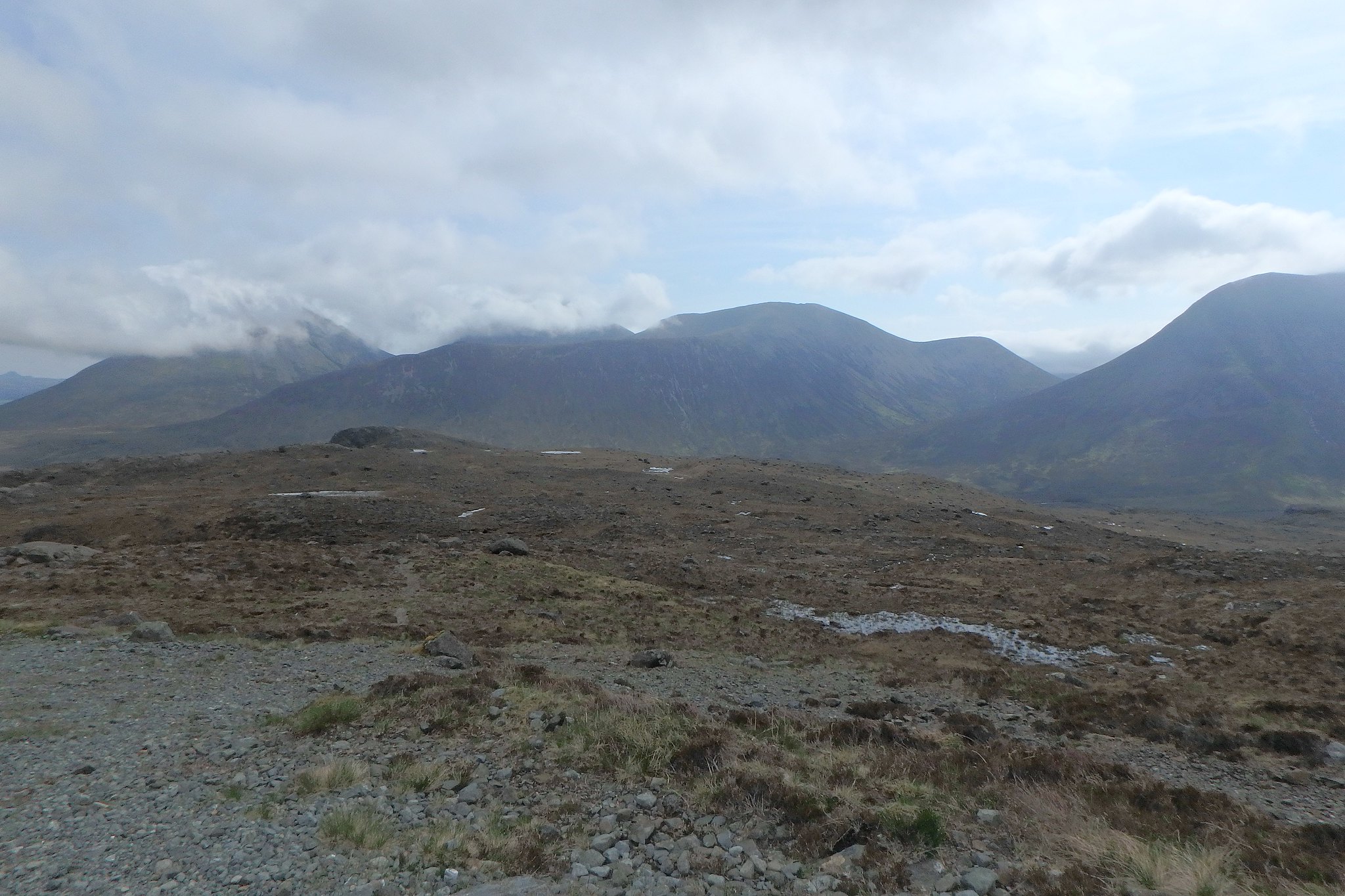 When we reached the South East Ridge the cloud was beginning to break up, there were some fantastic views into Lota Corrie, Sgurr Beag looked impressive and what we could see of the ridge brought back some great memories especially when we clapped eyes on the Inn Pinn. 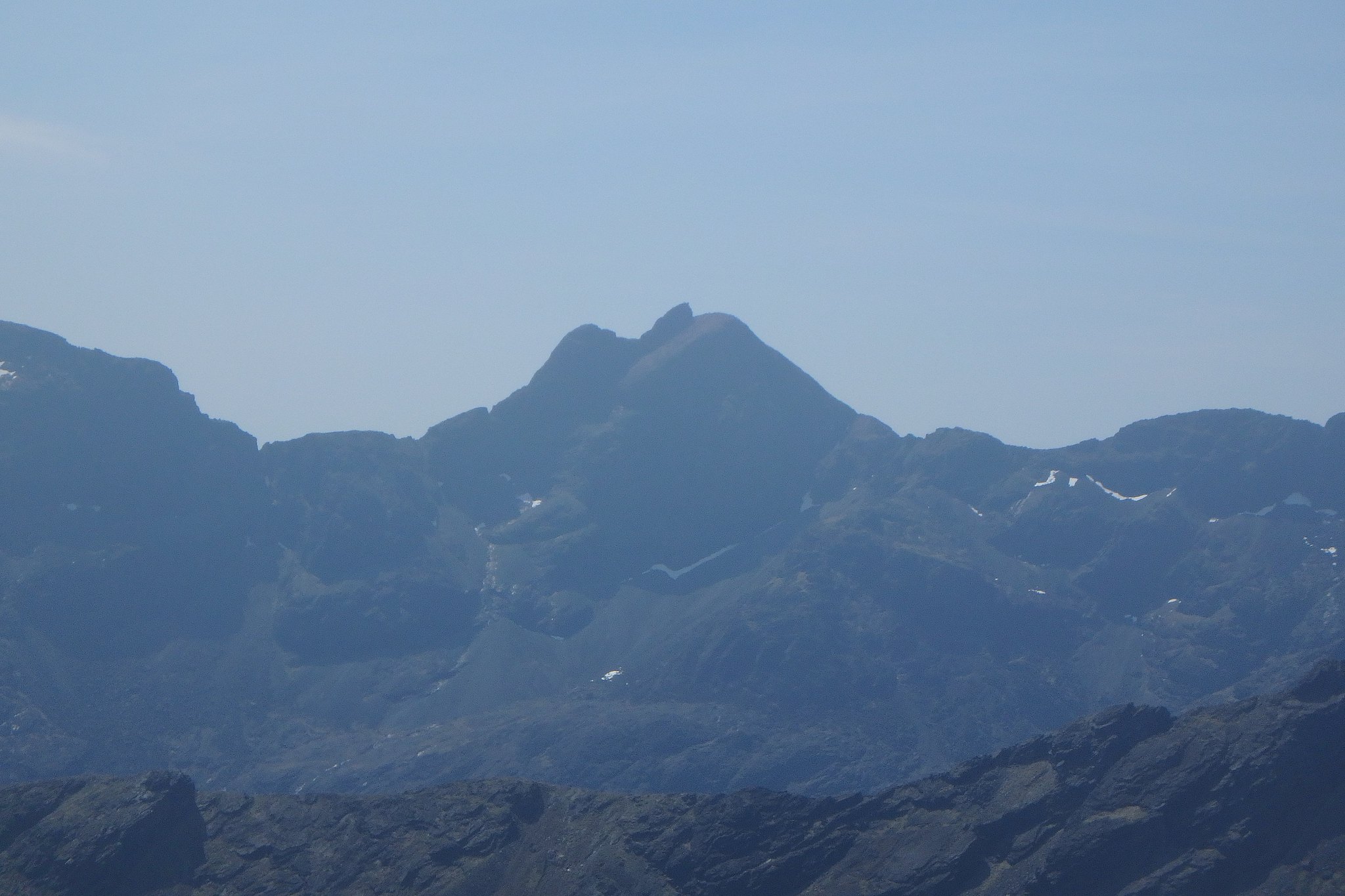 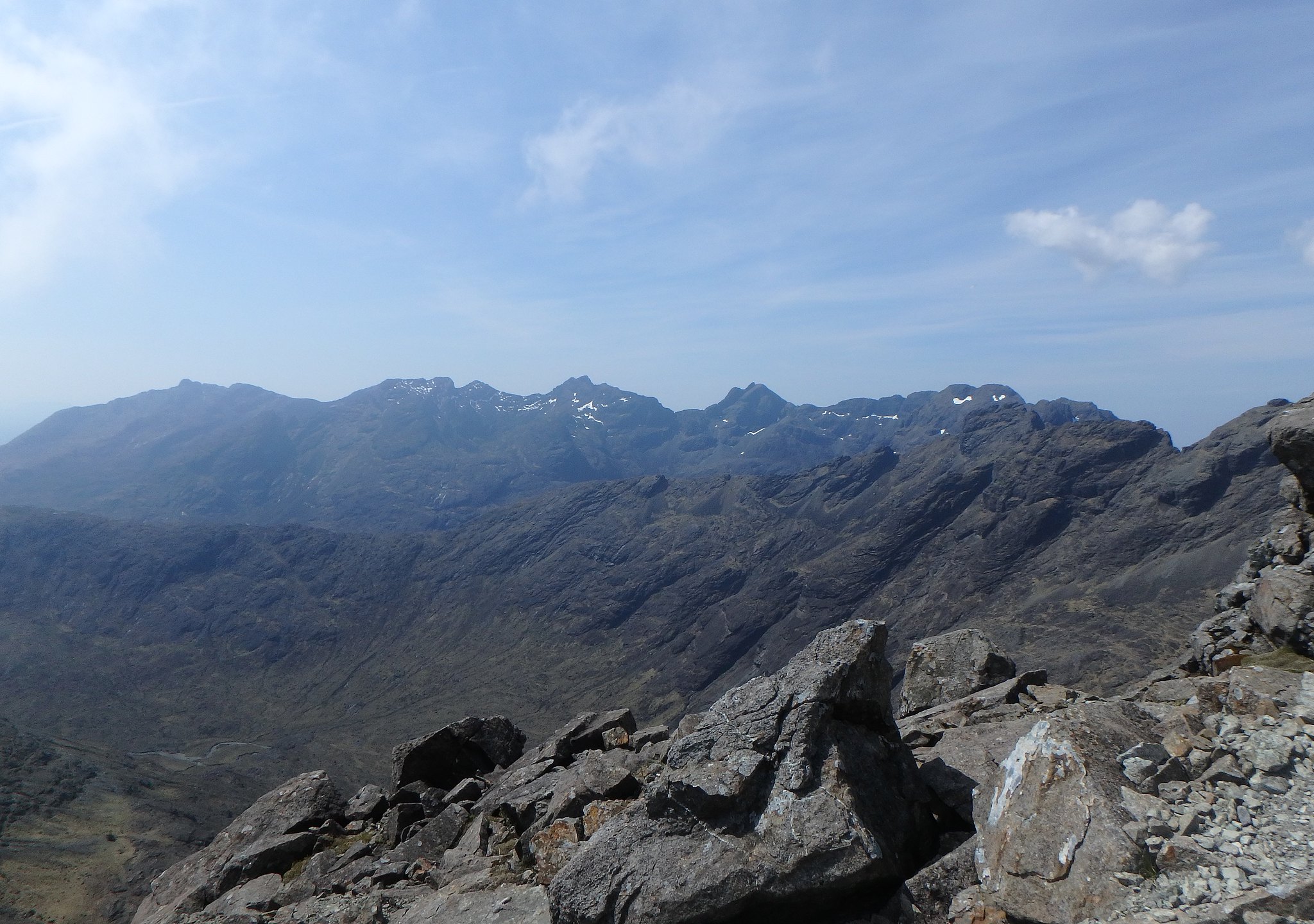 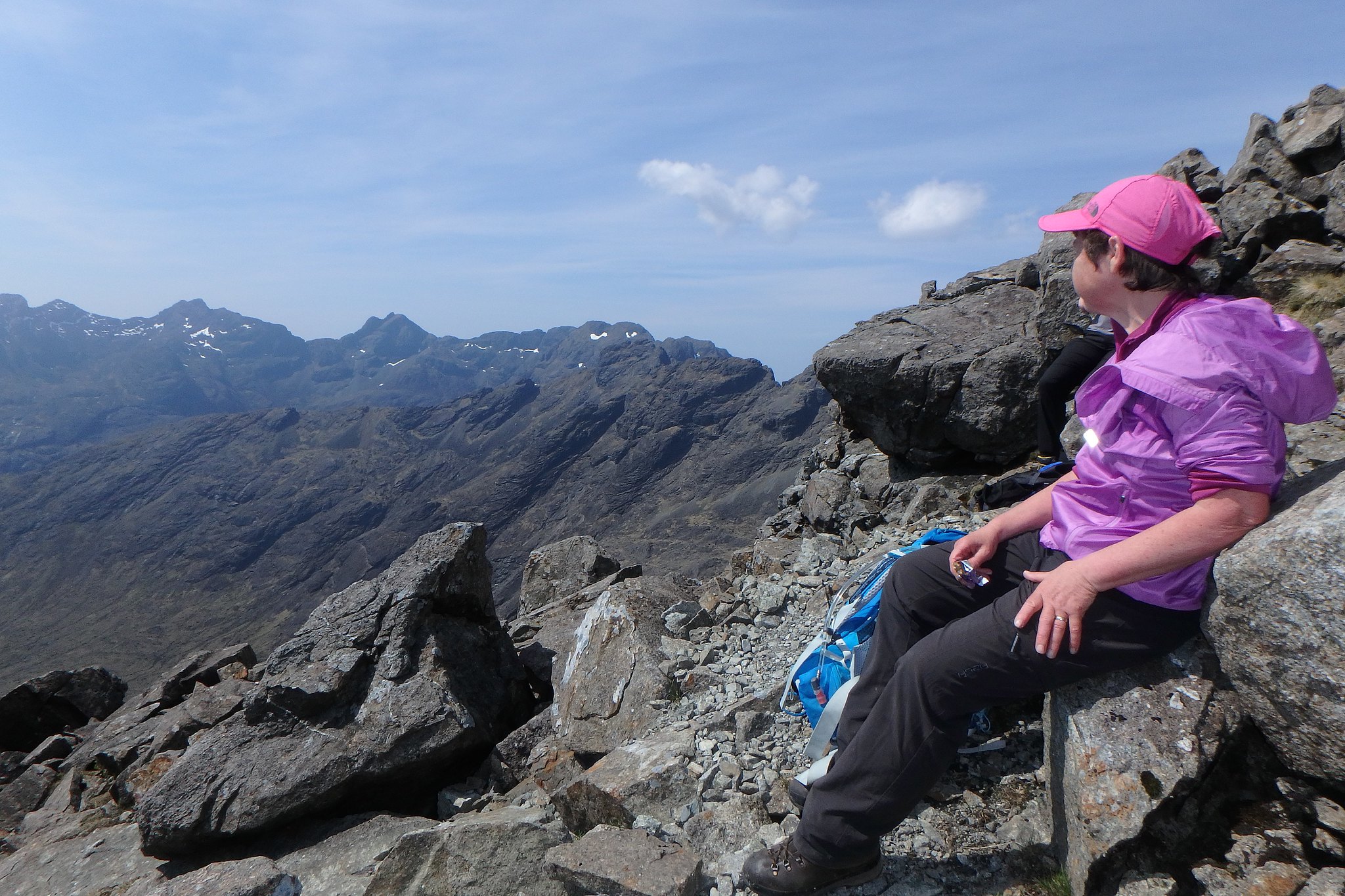 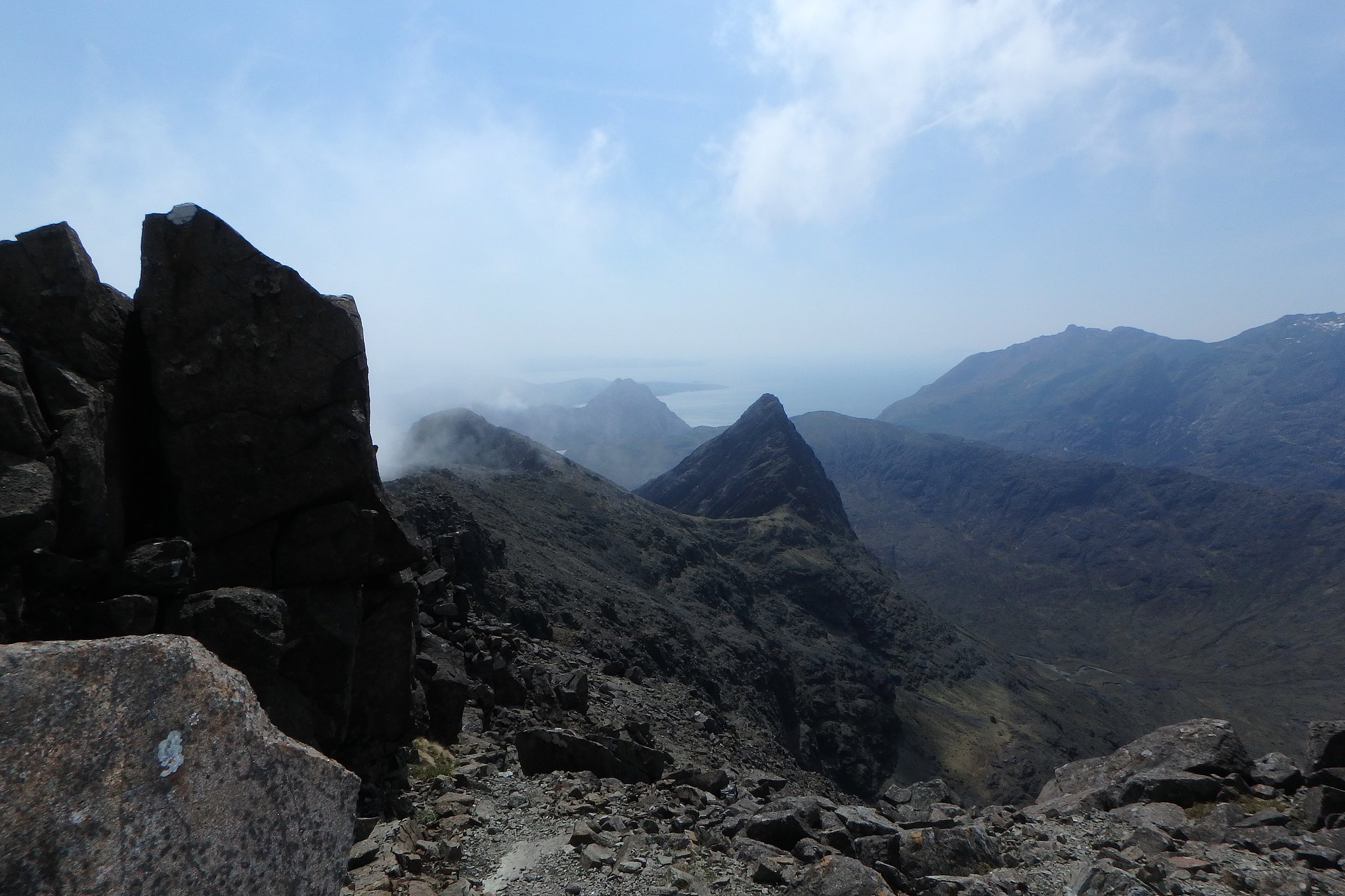 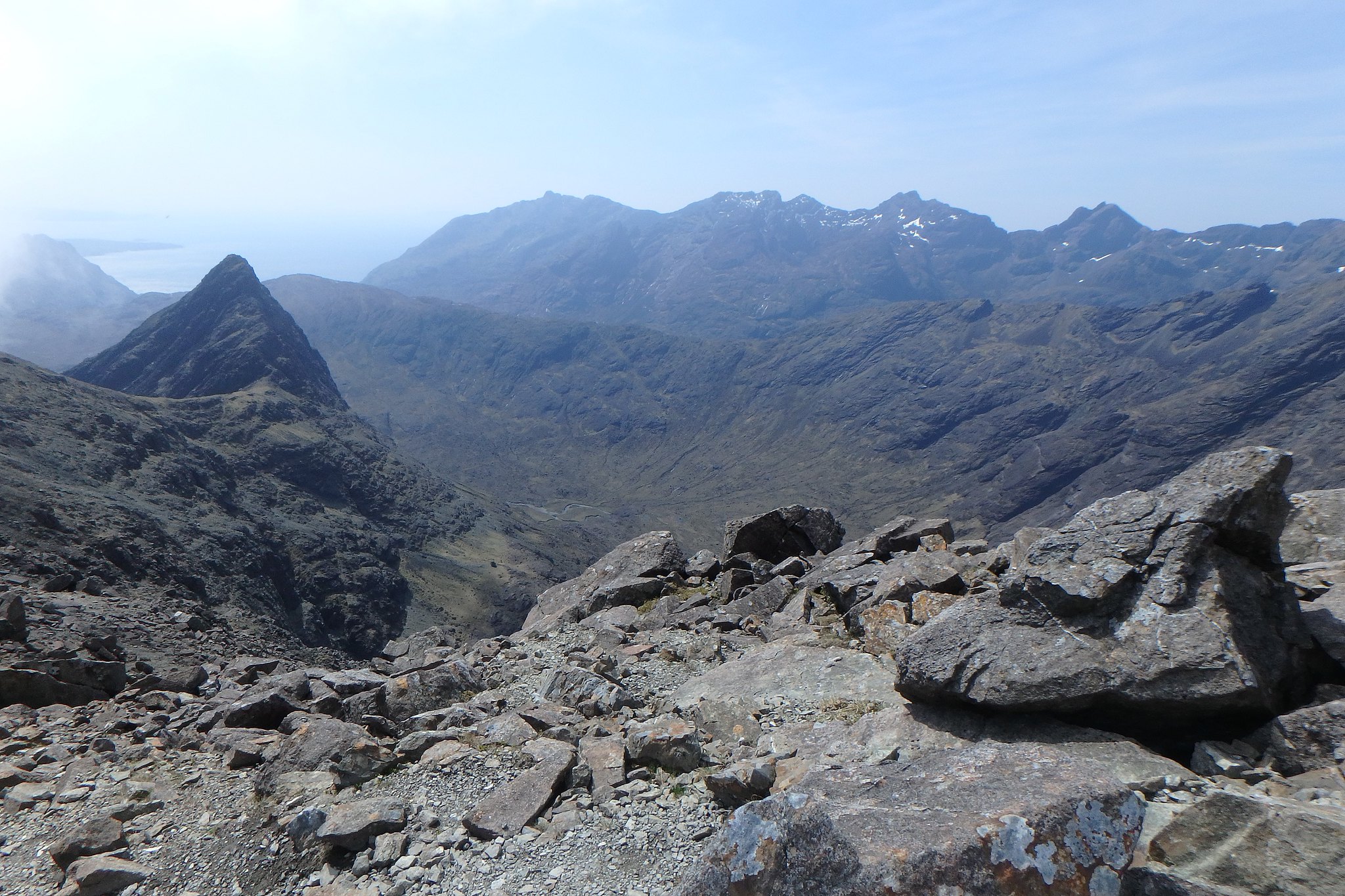 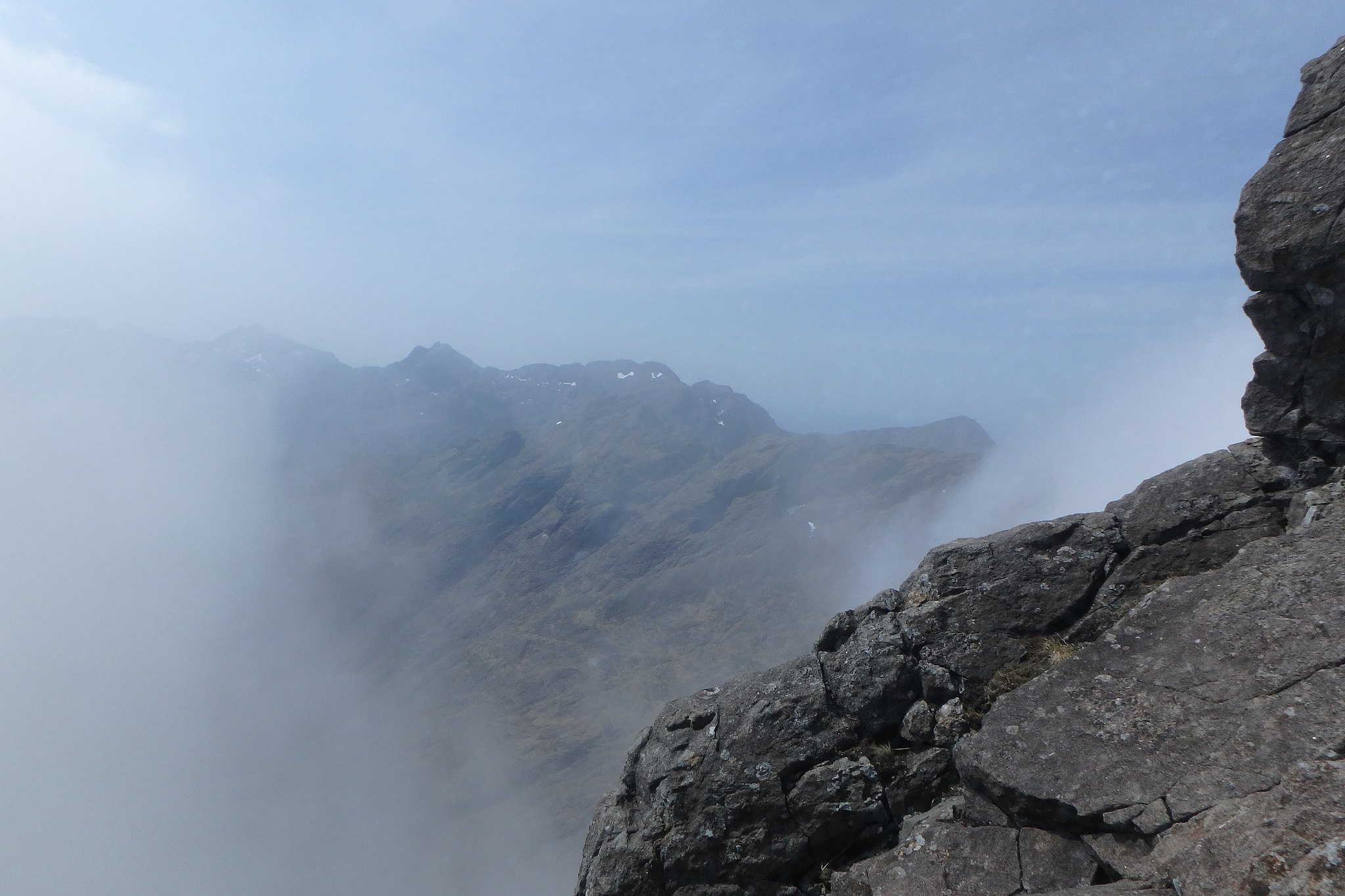 The summit was beginning to lose it's cloud, things were working out, it was gonna be good. We stopped here to have some nibbles and met up with another guided group who had been ahead of us up to this point, we had a good natter, there were one or two nervous exchanges, at least I wasn't the only one showing a bit of apprehension. We left the bags at the lunch spot and set off for the summit. Paddy told us there were no problems on this ascent, a few mild scrambly bits but nothing we'd need a rope for, he did take it just in case tho'.

The weather made all the differance for us, the rock was dry so there were no nervous moments, the climb to the summit was really enjoyable, there's a short exposed narrow section just before the summit that made me think a bit, Denise was loving it. After what seemed no time at all we were standing on the summit of Sgurr nan Gillean, our last Skye munro, the clouds were swirling about the summit adding a bit of atmosphere, but, wow, we'd done it at last and we were getting some views, it was dry and warm with a bit of a breeze, what a fantastic place to be we loved every moment of the ascent.

Denise with Paddy on the summit 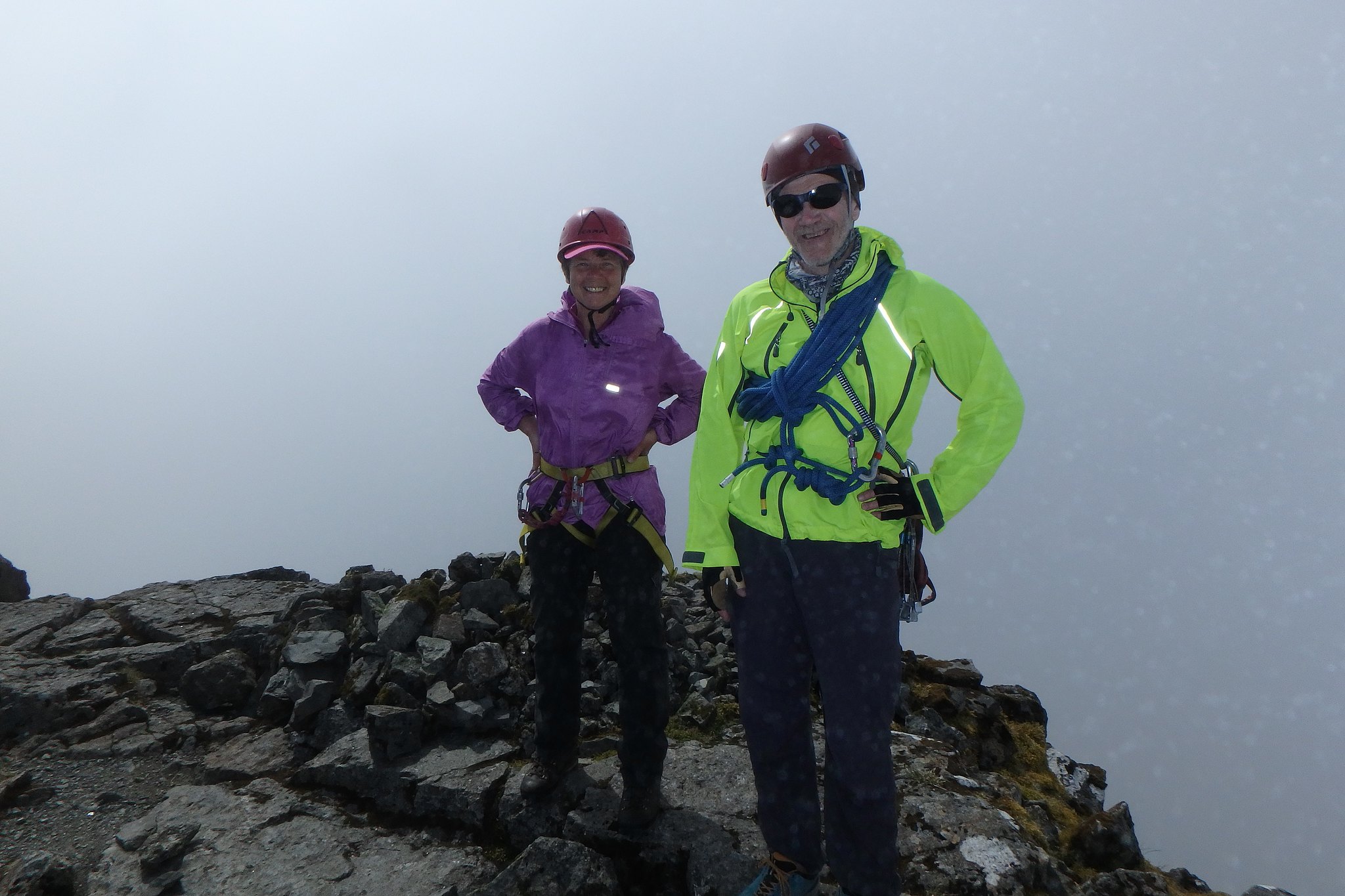 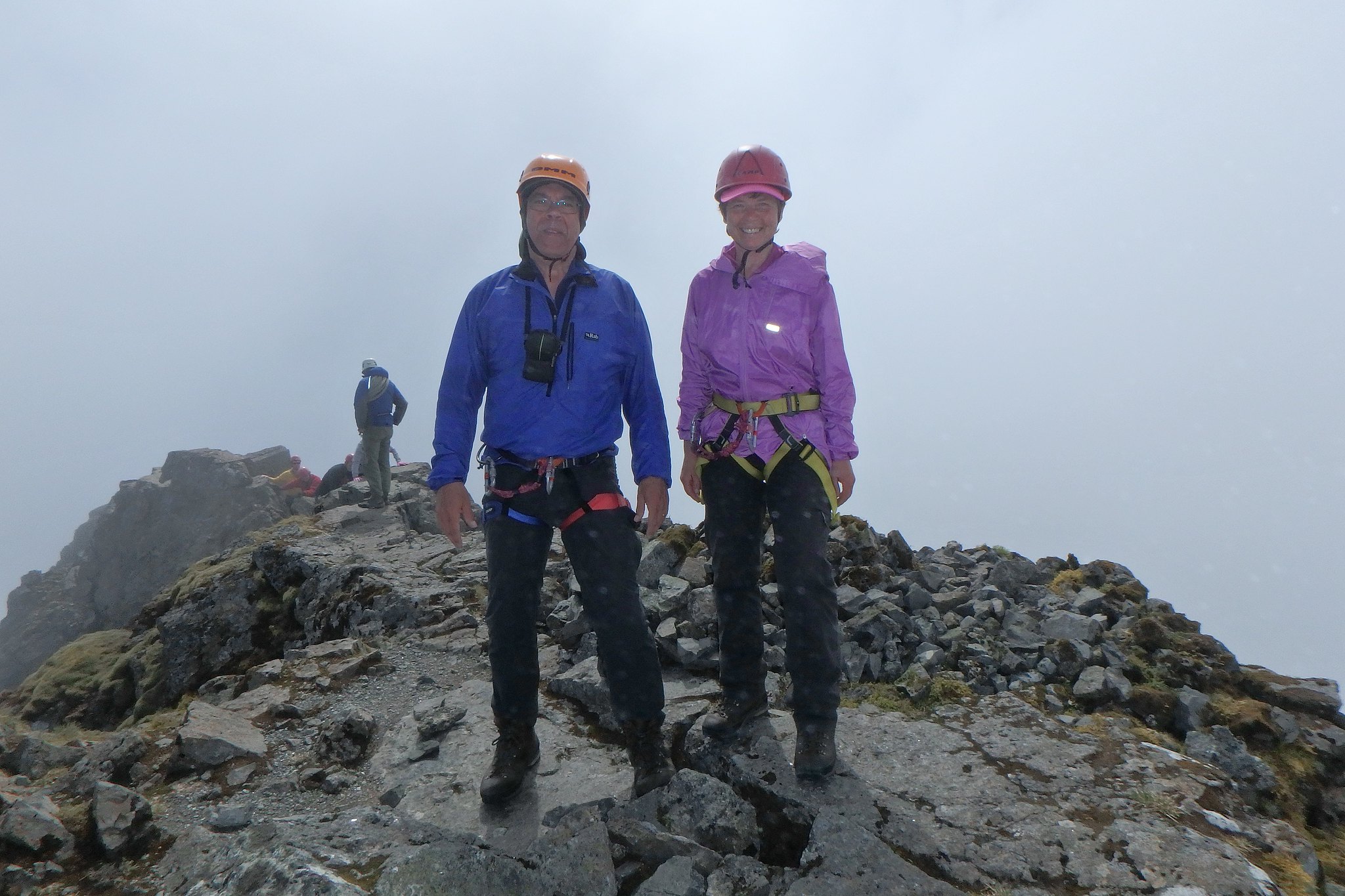 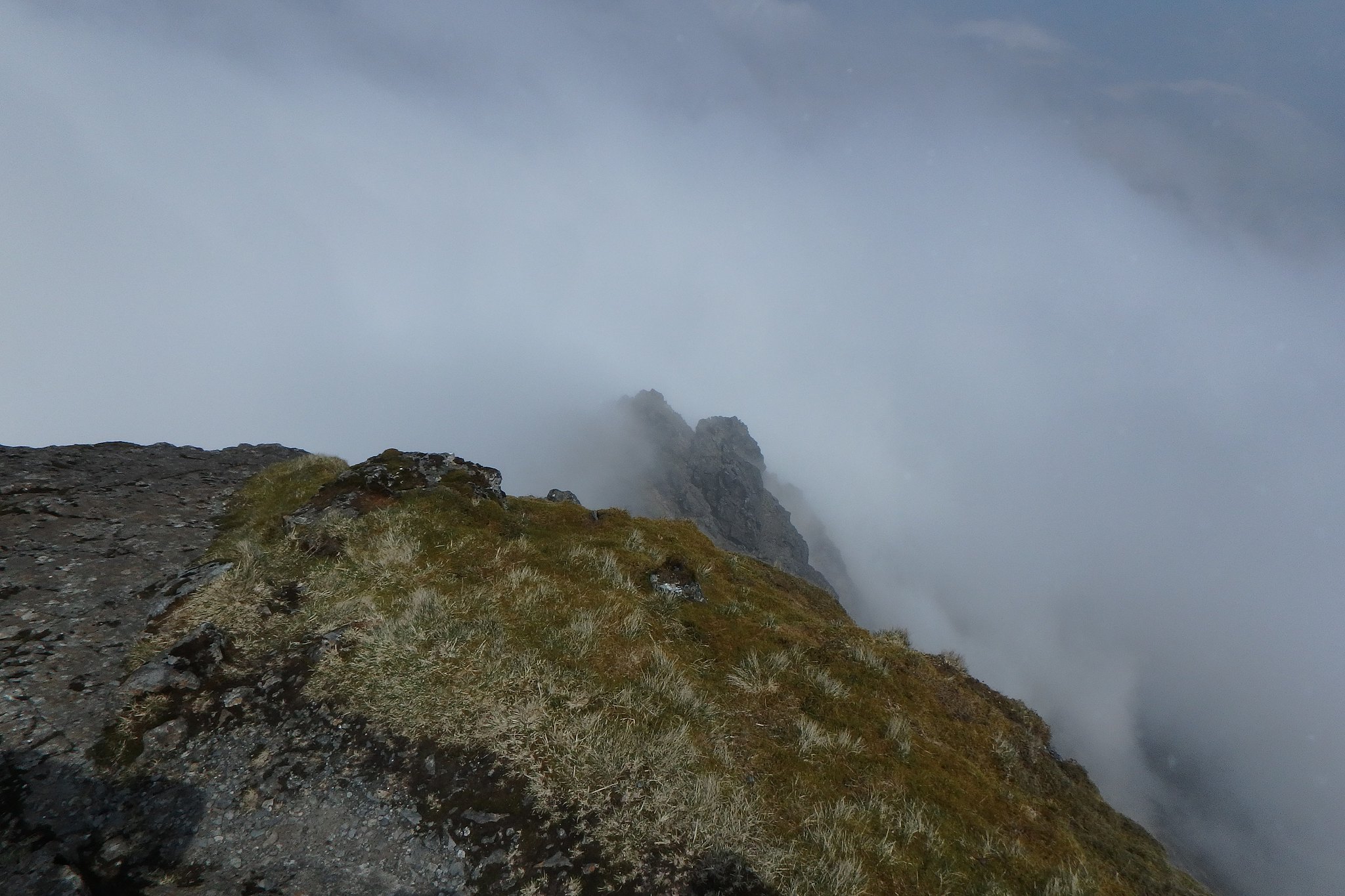 We spent a while on the summit, we didn't want to go down but, of course we had to. A strong breeze had got up so the crossing of the narrow bit was a bit of a buttock clencher for me, once beyond this the climb down to the rucsacks was superb.

Lunch was had back at the rucsacks, the clouds were almost clear of all the summits by now so it gave me a chance to get a few photo's. 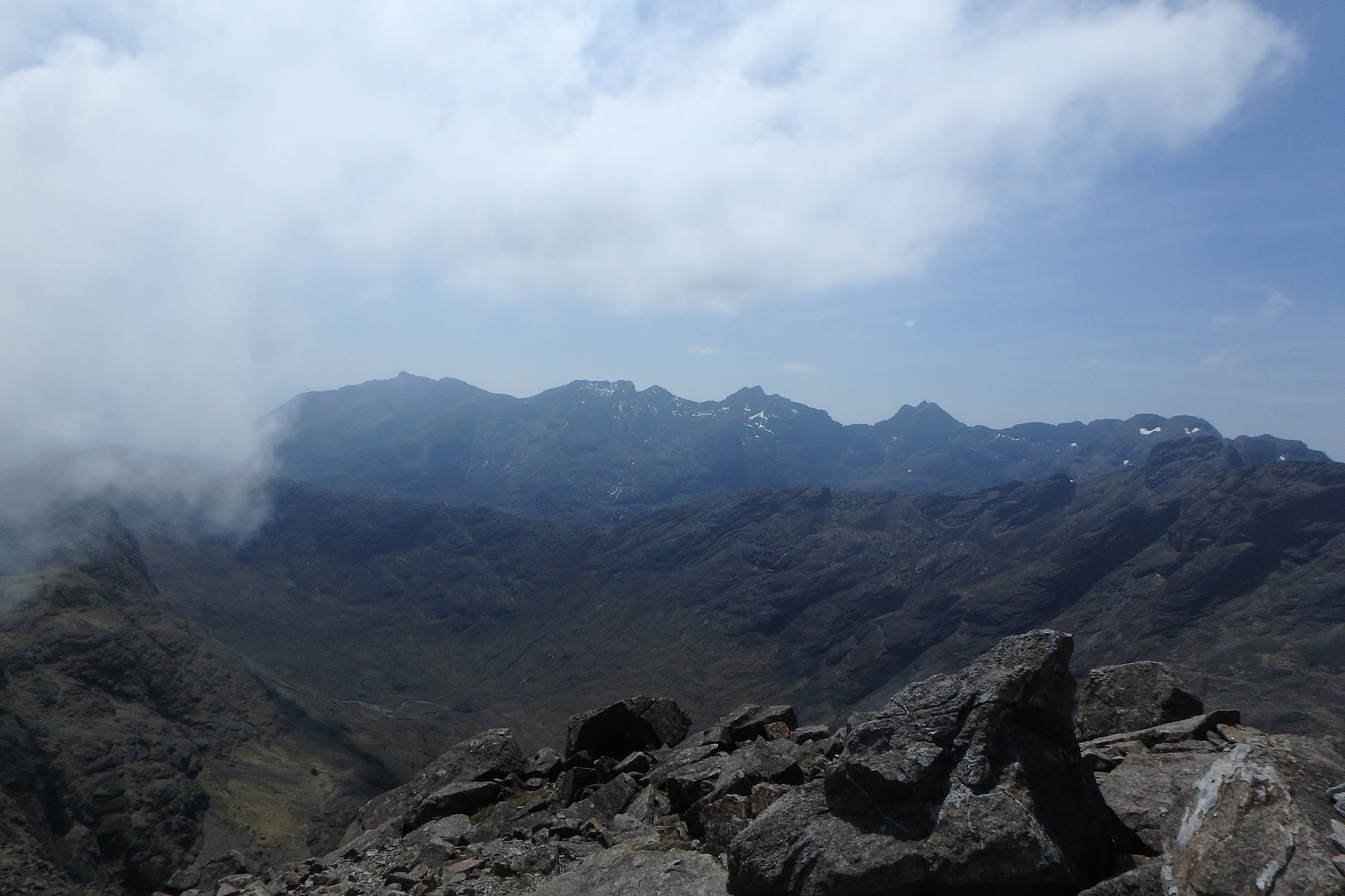 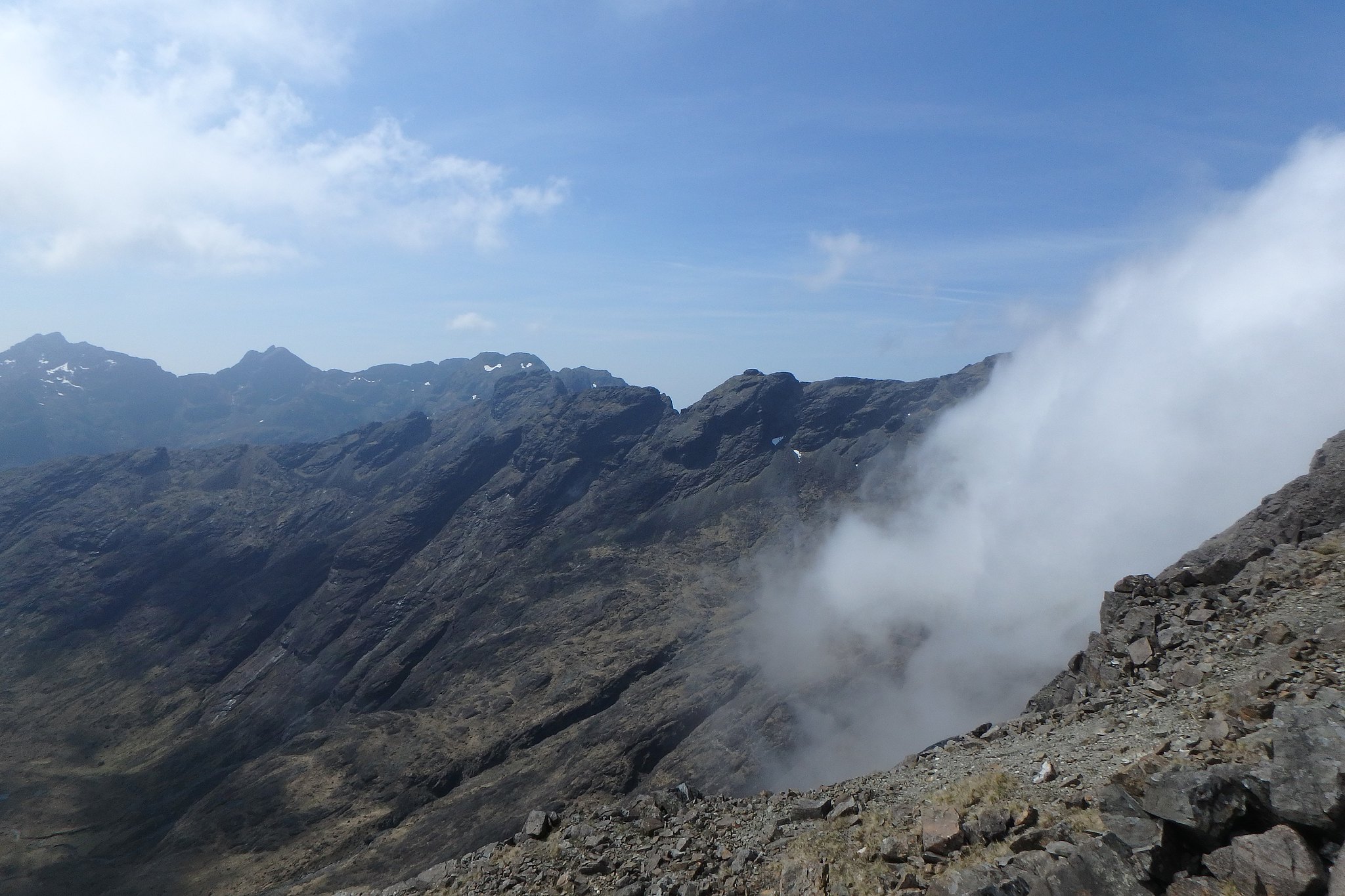 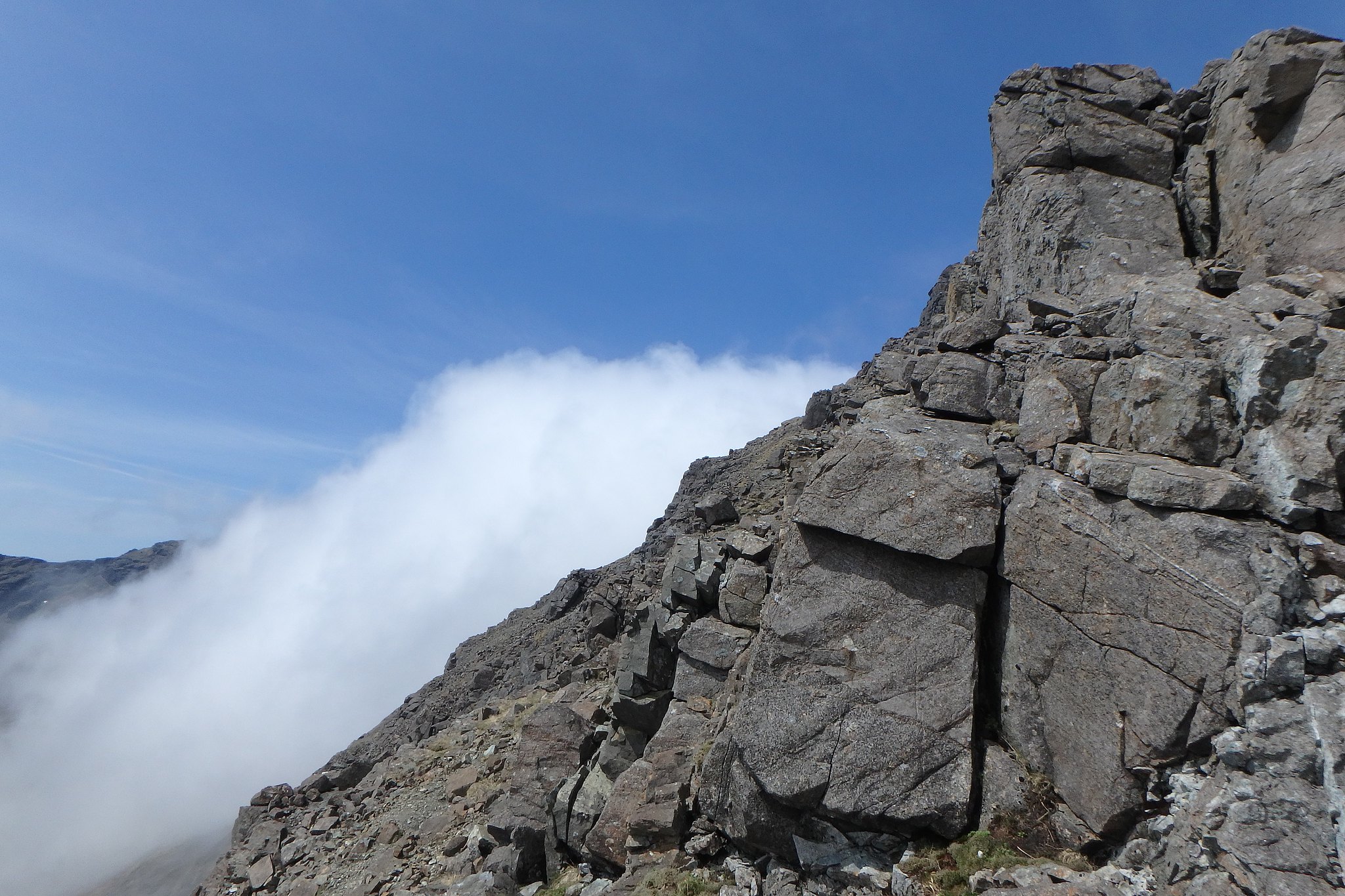 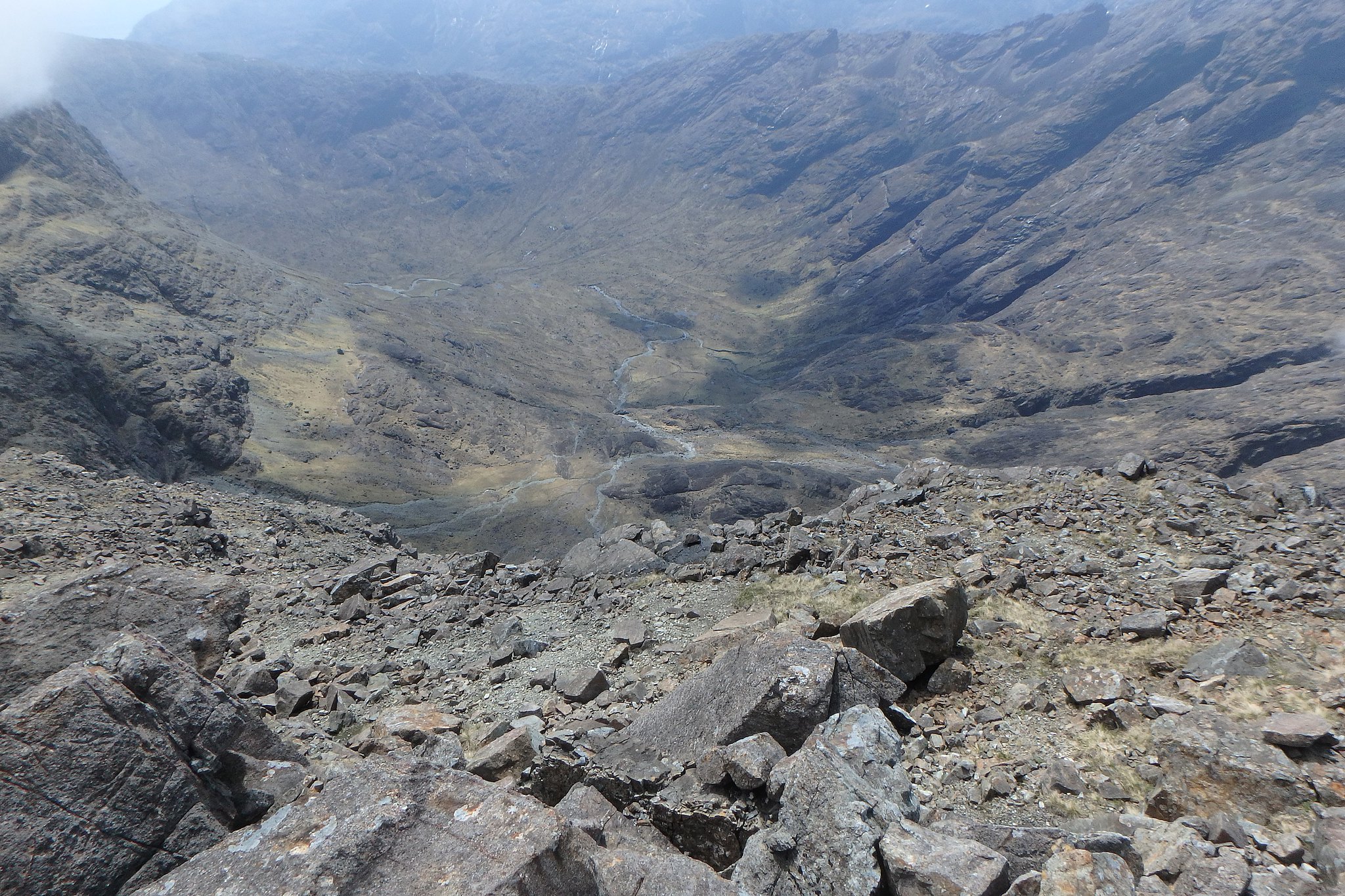 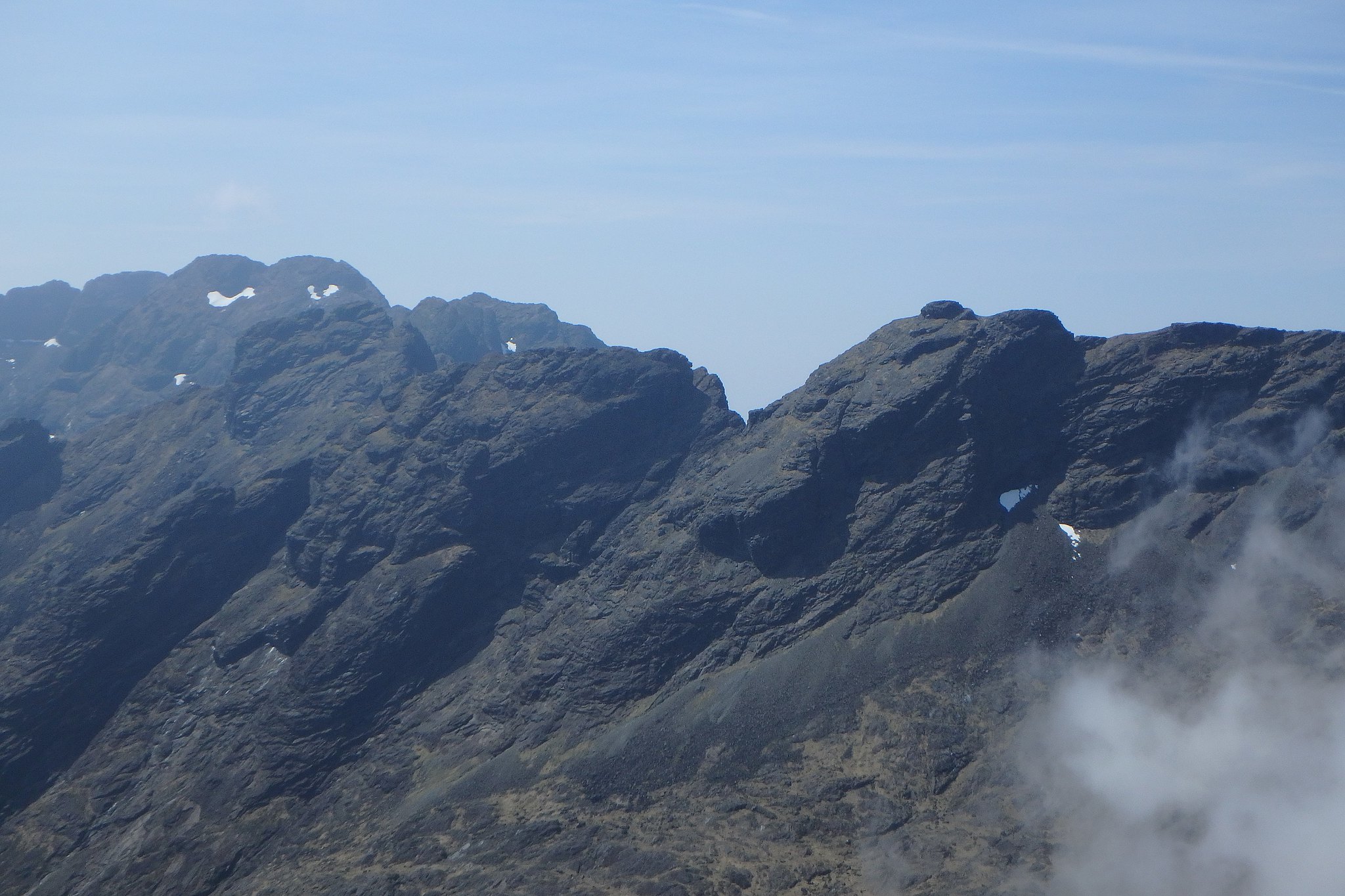 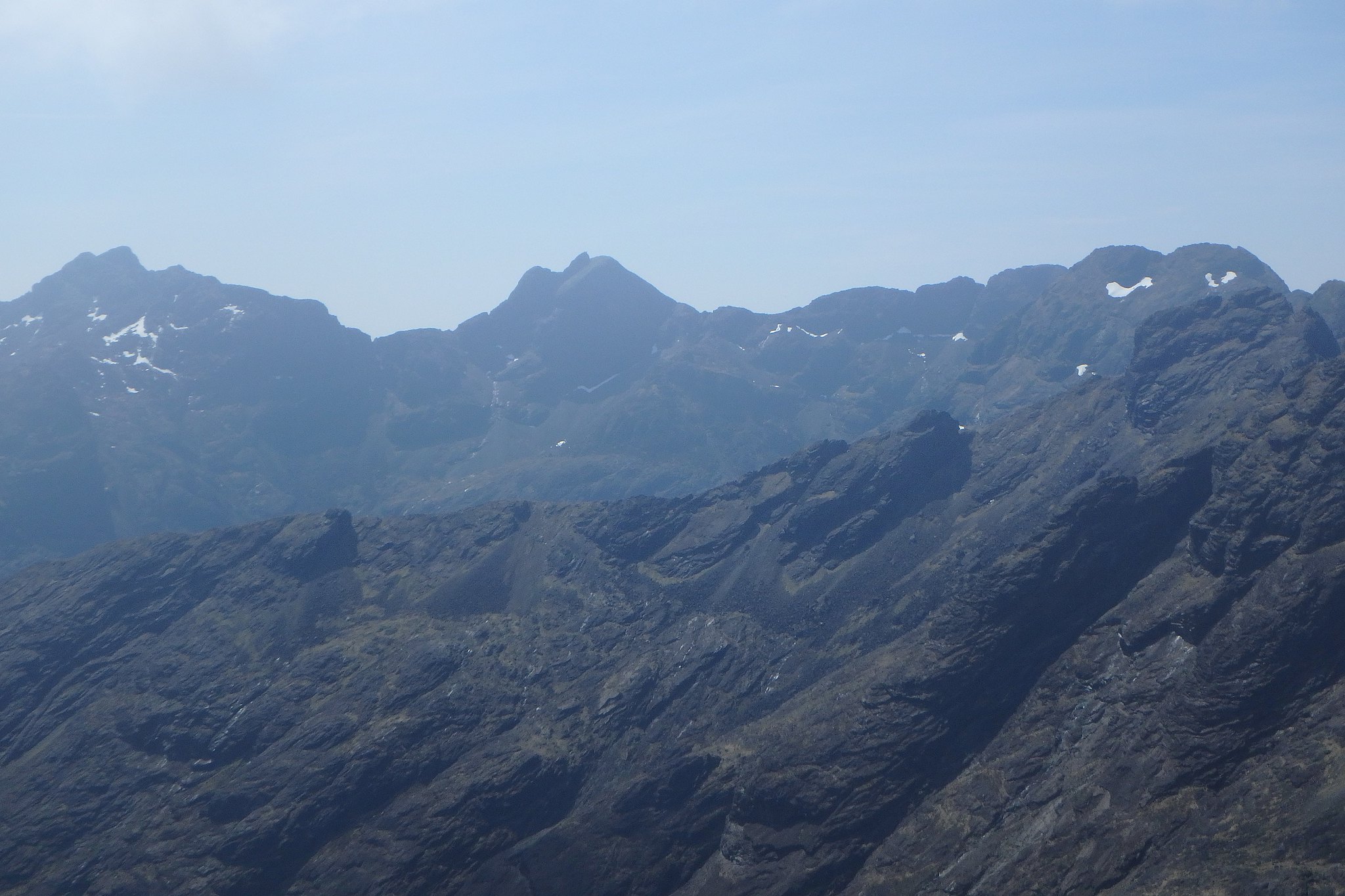 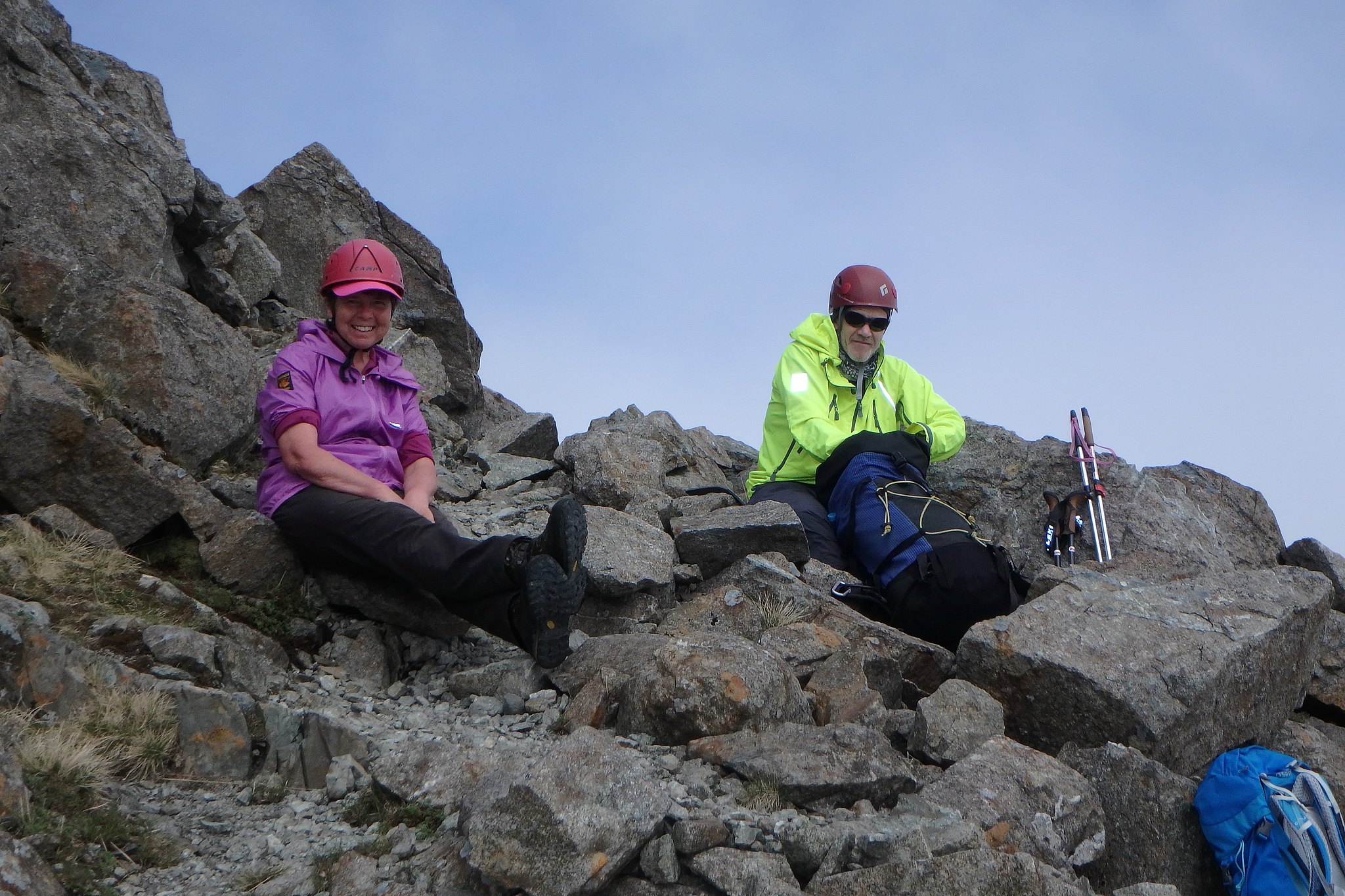 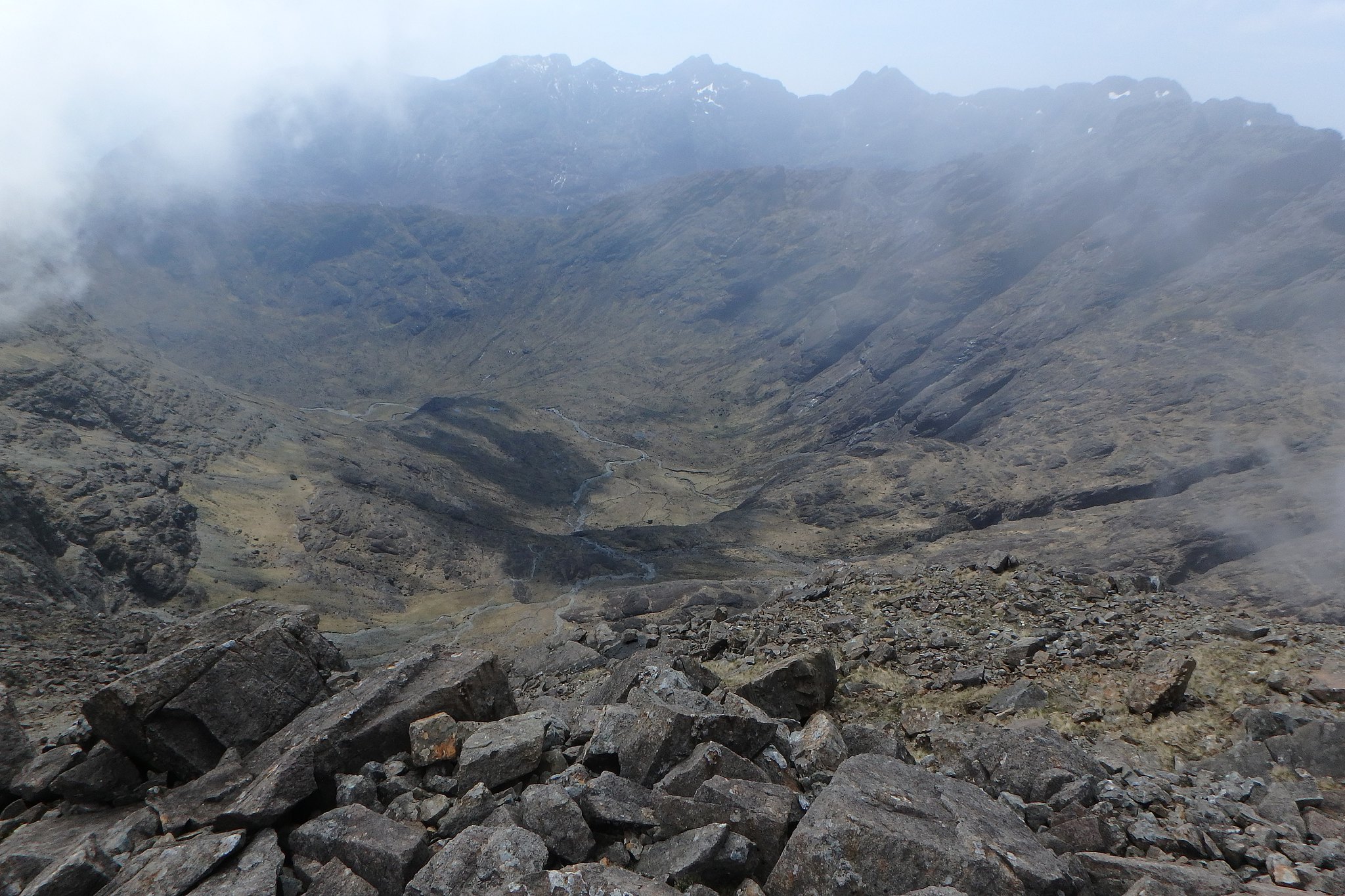 Setting off back down we walked into the clouds again and a marked drop in the temperature, we weren't bothered though, we'd had a fantastic trip.

The walk back to Sligachan seemed longer than it had on the way in, we only stopped once so I took this of Marsco. 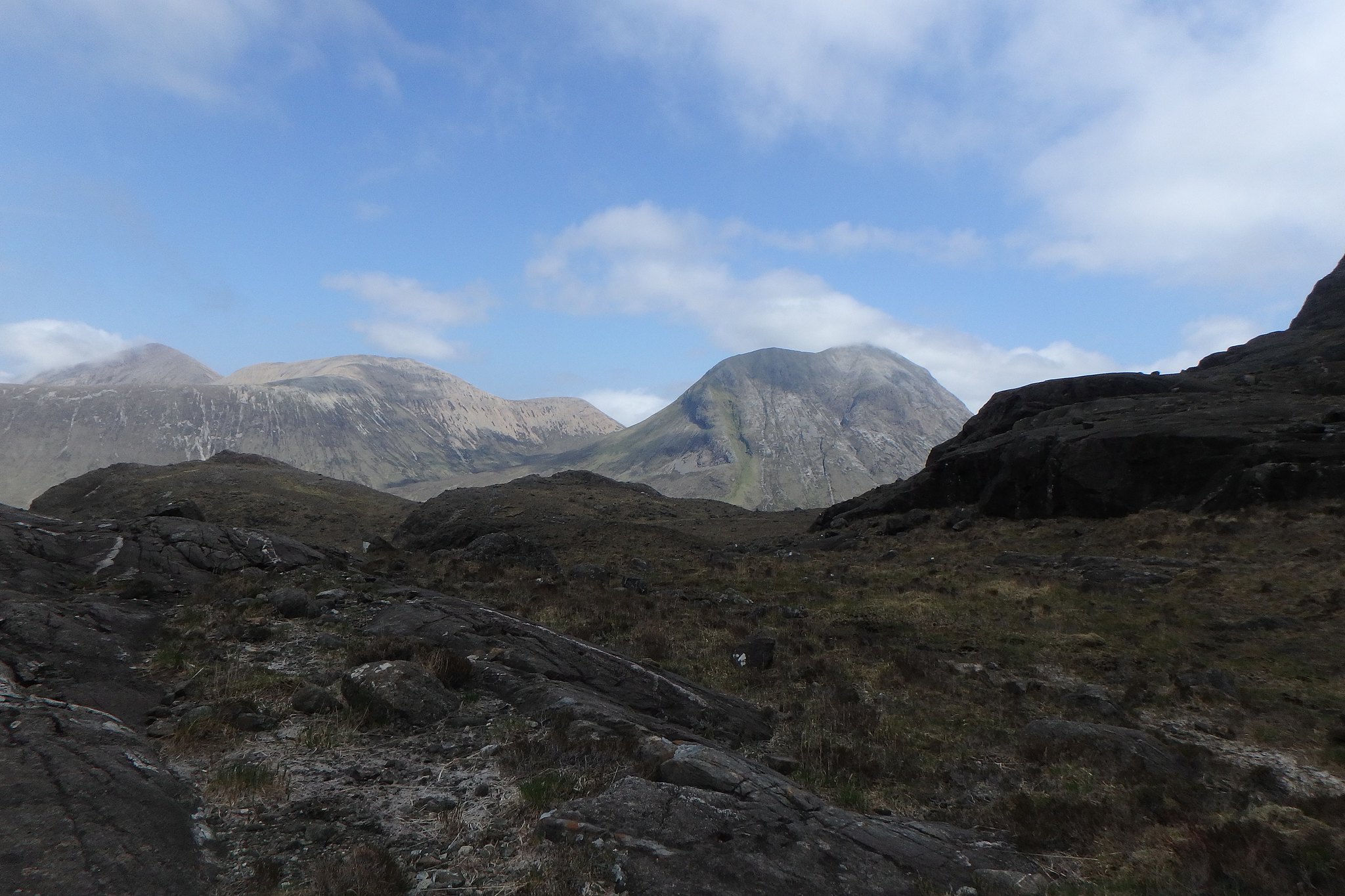 Back at the cars we spent a while with Paddy, he's a real gent, a brilliant guide, we've really enjoyed our time with him over the last couple of years, he came strongly recommended to us and we'll do the same to anybody who wants a guide for the Skye munros, we had to part company, he's got a busy season, all the best Paddy, stay safe.

Well, that was it, all the Skye munros in the bag, our next big challenges on our munro journey are the Fisherfields, Knoydart and An Teallach, once we've managed those I may dare to say we might just manage to compleat in the next four years or so, we'll enjoy giving it a go at the very least.