Finally I was out to get my last Donald, Moorbrock Hill. This round was never planned, & must have taken me around thirty years!

I don't know the exact date of my first Donald, or even what that was. It was probably Dollar Law, or maybe my local, Tinto, sometime in the late eighties. I started my walking in the eighties climbing Munros when I got the chance, & enjoyed other low level walks & long distance walks, so not just climbing the hills. Over the years, I've done most of Scotland's long distance walks, as well as a couple in England. The Highlands were great, but my favourite area was the south of Scotland, namely, Dumfries & Galloway and the Borders. I started to keep note of the hills climbed sometime in the nineties, but never intended to aim to complete anything. Though, when my Munro count hit the nineties, I was keen to hit the 100 count. Then when doing a route in the Manor hills, during 2015, I met other walkers who told me they were doing the Donalds. This got me thinking, as I'd already done 60 of these, & I've no chance of completing the Munros. This was an achievable list for me to complete before I'm past it.

So now three years later, I'm off to do my last.

Starting at Craigengillan in the Water of Ken Valley at 9 am, my car thermometer told me it was 18°C, so off to a warm sunny start. There's a no parking sign at the entrance to Moorbrock Estate, & nowhere else decent to park. So I just parked on the grass verge at the next passing place, not the best place, but for today, it'll serve my purpose. Took the track to Moorbrock Farm, then a left, after passing the last building, along the track heading straight for the hill. I decided to keep following the track around Green Hill, rather than heading straight up Moorbrock Hill where the track turns left below it, (straight up looked just too steep & rough for me today, as it now felt boiling hot in the sun).

The track, though a bit longer, was a much easier option. So in under two hours, I was at the top of my last Donald. For me, this was a very special occasion, & worthy of a true celebration. I'd brought a dram of Scotland's finest malt, so the celebrations could begin, but it was a quiet affair, as I never met another walker on the entire walk, never mind here on Moorbrock. In fact, I've never met any walkers during my last 12 Donalds during 2018. But no worries, I love it like this, got the whole place to myself...bliss.

There's a great place to sit on some flat rock right above the cliffs of Moorbrock, just to the right of a large rock by the path about 100 yards short of the summit. Let the party begin...Celebratory dram for my completing the Donalds 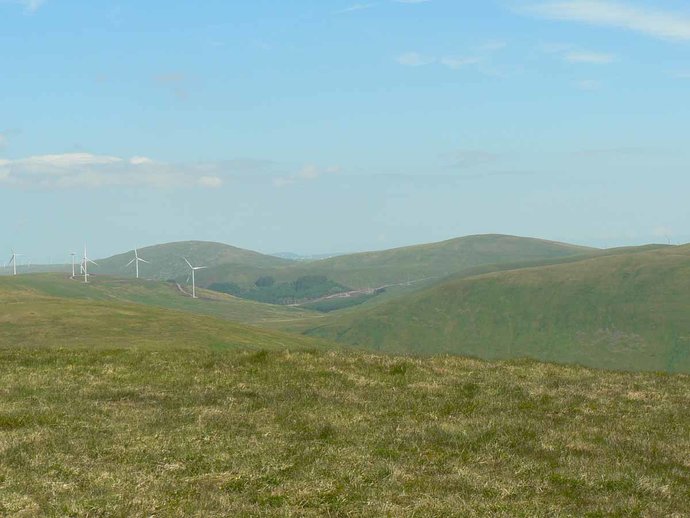 To continue, I decided to follow nxmjm's route, & follow round the hills taking in Keoch Rig, Mid Hill of Glenhead & Dodd Hill. A good path continues over Moorbrock Hill's north top & down to the col between it & Keoch Rig. I cut to the right to see Luke's Stone. Then rejoined the path to Keoch Rig. Mid Hill of Glenhead and Dodd Hill from Luke's Stone

The path here is narrow & faint, so try not to lose it, as it's tricky to find again. If you're planning to follow this route, better to do as soon as possible, as it looks like Keoch Rig is soon to be the next victim to be destroyed in the wind farm wars. Here you will find one of those tall annomometer towers, used to record wind speed, the first stage in wind farm construction. When I first started my walking, these things hadn't been invented, now they look like taking over the whole country. After Keoch Rig a good track leads towards Windy Standard. Here you'll meet a fence (electric), at a gate. Don't cross, but turn left heading up Windy Standard, where after a short walk you'll see the Deil's Putting Stone. Return to the gate, & stay on the right side of the fence, which will lead you to Mid Hill of Glenhead & Dodd Hill. Dodd Hill has a lovely little lochan right at it's summit, a very rare occurrence to be found in the hills Water of Ken Valley from Bawnhead From here head southwest, rough going in places, to reach a track, which takes you over Glenhead Rig, & back to the start. A fabulous walk & for me, right up there in my top ten, though maybe my dram had something to do with that.

Back at the car, the temperature reading told me it was 30°C...wow, what a day!

Congratulations - a completion long in the making (and a wonderful day for it as well). I loved Moorbrock when I did it almost exactly a year ago with the rest of the Aftons. Very shapely hills for the Donalds. I'm aiming for a Donald completion by 2019 but we will need to wait and see

Had no idea about the Dodd Hill lochan. Cheers!

Congratulations on the compleation

Moorbrock Hill is a good hill, although the I remember on the day that I did it my own personal adventure that particular day was only really beginning to unfold

Well done Robert, glad the weather gave you the chance to make the most of it.

Nice day for it too. Like you, I didn't plan on a donalds round either and started them as a "by product" of the corbetts but they turned out to be better than thought as they're mostly not too far away and many make for good, varied walks - cheers

Well done sir. I recall doing Moorbrook some years ago and like you I started from the house at Craigengillan but a strange thing happened - I was hijacked by a small brown terrier dog! No amount of "Go home" or ignoring it had any effect whatsoever. I even stopped to check the map and all it done was trotted ahead and waited at the bridge. I suspect it must have hijacked others for a "free walk" before I came along. So me and said dog done Moorbrock then off the north end and back to Craigengillan via the forestry track and it didn't even mooch my sandwiches!

Many congrats, like everyone else I never intended to tackle all the Donalds. I started visiting them over the winter months to keep up my fitness and I really enjoyed them. A spin off of the Donalds is I am now working my way through the Marilyns and only have a handful left east of the M74.