You'll remember that horrible cold weekend in the East and Central Scotland due to the northerly wind. Apparently the West of Scotland was having a cracking weekend, so where more Westerly from Glasgow area than the Ballachulish Horseshoe?

We drove from Glasgow, through Glencoe and past the Ballachulish Bridge, where the car park is well sign posted on the left.

Departing the car at around 11am, we followed the excellent landrover track until the split which is sign posted left for Sgorr Dearg and right for Sgorr Dhonuill. We went right for Donald's mountain. Left for Dearg, right for Dhonuill, we went right

Eventually the path u-turns, at this point, you head into the woods along the side of the burn, then a gentle uphill walk until the red scree bealach. This is a bit of a scramble, but nothing too difficult. The top of the red scree

After this, you are on the Ridge and it is just a haul up to the roomy summit of Sgorr Dhonuill. The views were superb and just got getter as cloud lifted all around. Me and Peter atop Sgorr Dhonuill

Whilst videoing the views, a whisp of cloud came over the top and due to the sun behind us, a Broken Spectre appeared which was basically me and Peter surrounded by a rainbow. 
We then began the decent down to the 757m bealach between the two mountains. The expose here is immense with sheer cliffs just off the path, at least the back end of the mountain isn't exposed, so just kept looking that way. Peter with the cliffs of Sgorr Dhonuill

From the beallach, some zig zag paths up to the top of the 2nd munro Sgorr Dearg, the higher of the two by 100 feet. Jim at the top of Sgorr Dearg

The views from here easily beat those from the 1st munro. 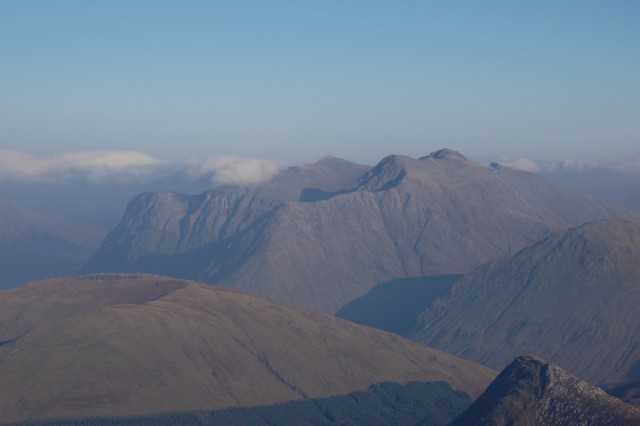 Back down to the bealach. Then the boggy decent down to the woods, where the path is much better and eventually reaches the landrover track again. This is quite confusing but watch for the sign posts stating car park.

Back at the car for 7pm just as it was getting dark and then that 2hr drive to Glasgow.

Here is my video of the walk:
[youtube]http://www.youtube.com/watch?v=kS3OvMOBQxw[/youtube]

Here is just the Brocken Spectre that we saw on the top of Sgorr Dhonuill:
[youtube]http://www.youtube.com/watch?v=xrypsgJSOS4[/youtube]