A planned in advance outing which is rather rare for me. I saw a spare slot on our calendar and decided to 'bagsy' it as a Hill day as it has been frustrating seeing all this good weather pass me by. My last planned trip out had to be adjusted from Munro's to Marilyn's due to the weather.
George was available so I looked at his red balloons and we narrowed the choice down to either Sgurr Breac or Slioch as his other red yins were either in Affric or Mullardoch and they are planned for later on.
We eventually settled on the Western Fannichs as my last visit there with kaiserstein was memorable for all the wrong reasons, Wet Wet Wet just like the old pop group, surely the weather would be kinder this time? Out of interest I had a look at my photo's from my last trip 4 years ago and I only took 15 photo's, that kind of indicates how bad the conditions were.
George had contacted a couple of his pals who also have round about the same hills left for compleation, so we ended up as a fivesome. I volunteered to drive and arranged to pick up George and Ali at 5.45 and the next stop would be Inverness for coffee and toilet not in that order. We met up John and his son Alistair in Inverness and headed NW in a mini convoy. As usual for a Sunday there were already half a dozen cars in the parking area and the weather had room for improvement, in other words it wasn't very good.


our_route.gpx Open full screen  NB: Walkhighlands is not responsible for the accuracy of gpx files in users posts
Slightly unorthodox route to visit these 2 hills, we did the route clockwise and the route to Sgurr Breac was easy and along a good path until the final ascent of Sgurr Breac. The descent off A' Chailleach was following the WH route which turned out to be pathless and Borders like on the lower slopes.

We are going left at the crossroads

Proves that it has been very dry recently

Loch a' Bhraoin, note the rather low cloud 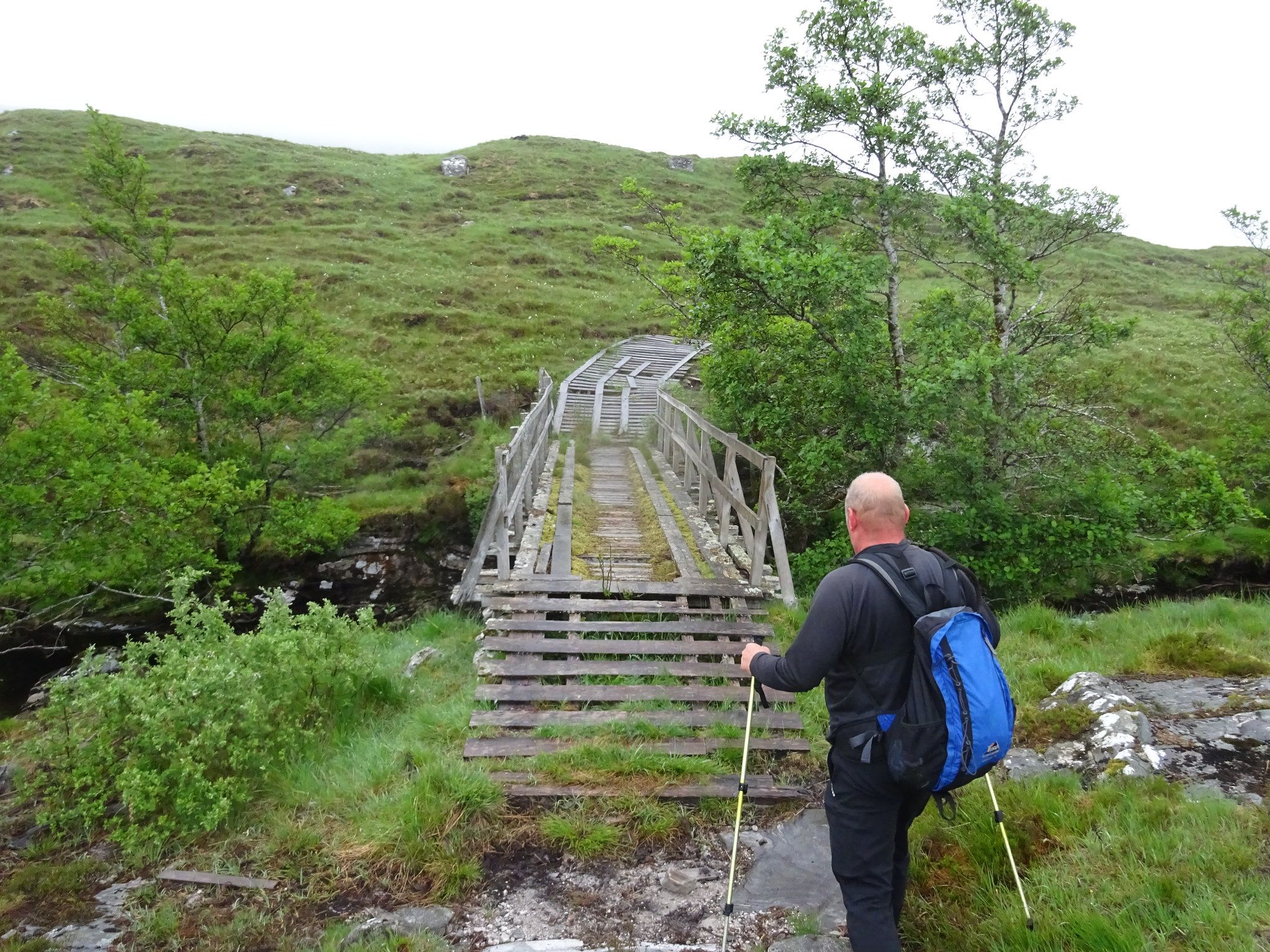 Not the best water feature I have posted, barely a trickle

John (Mr Admin) as usual had printed off maps for everyone and had planned a good route in as he was planning to tackle Sgurr Breac only and not bother with A' Chailleach. The path up the glen also doubles as the path out for the central group of Fannichs so good time was made. Once we reached the bealach ESE of Sgurr Breac we left the path and headed up the shoulder and then onto the summit.

Looking back at Alistair and the stragglers behind him

The cloud was swirling around and wee gaps were appearing, one had to be prepared

Loch Fannich appearing out of the cloud, zoomed a bit

One patch of snow, not many remaining

Nearing the summit, heads down one foot in front of the other

One of the 2 cairns appearing out of the murk

After eating our well earned lunch it was time to say goodbye to John and Alistair, they were going to retrace the inward route back to the car whereas we were going to plod on heading west.

The initial descent off Sgurr Breac

Cloud clinging to the edges, obscuring the steep drops

George and Ali posing before the final ascent

Arty shot, little flowers waiting for the sun to appear - they will have a long wait

They look overjoyed to have reached the summit of A' Chailleach

The descent off A' Chailleach involved retracing our steps for a very short distance, then heading down the shoulder following the WH route. There was an obvious path to follow to Sron na Goibhre, as usual we wre chatting away and stayed on the path about 50m further than we should have. We were curious as to where the path was heading but we opted to stick to our plotted WH route - which was now completely and utterly pathless. We knew we were heading to the north of the lochan and then following the burn, if you can call it that as there was hardly any water in it. Looking on the very bright side, crossing the burn anywhere further down certainly won't be a problem.

Loch Toll an Lochain again from a different angle

Loch Toll na Lochain, weather now improving as it always does on the final descent

Probably an impressive waterfall after a long spell of rain

More flowers to add a bit of colour

Never seen a sheep posing before, M4rtin you have competition

The race to the style

The bridge is always a welcome sight

We were back at the cars in a shade over 6 hours and as it was rather nice and warm outside I suggested we stop at Corrieshalloch Gorge as George had never seen it. I think he pleasantly surprised, even though the usual amount of water travelling down the gorge was much less than usual. For anyone who hasn't been and have passed the car park, next time stop you won't regret it. Here are a few phone photo's to tempt you.

Look carefully and you will see the viewing platform in the distance, middle of the shot near the top

From the viewing platform

Bridge in the distance

A cracking day out and as always a huge thanks to all my walking buddies, even the weather couldn't dampen our spirits.
Next on the menu is a trip back to Strathfarrar estate to tackle the 4 hills again, like last time quite a crowd going but a completely different crowd - bring it on.

Good pictures and write up Martin, thank you.

Nice report, Mr. B, and some decent shots considering the low cloud.
As for the sheep, no competition; he wasn't smiling any better than I do.

Aye, the problem with advance planning and the vagaries of Scottish weather - looked an enjoyable day out nonetheless. Is this you working on round 2 ? - cheers

Hi Martin, nice route and nice photo's, I'm not a great fan of the clouds but they do add atmosphere, especially when they start to break up over the steep bits.
We've passed the gorge car park on a few occasions but it's always rammed so haven't stopped, I can see what we've been missing now, we'll stop next time