This story is from Bank Holiday Monday, when the heatwave over Scotland reached its peak. Our car thermometer showed +29*C. The air was hot and heavy, the sun merciless, yet we decided to visit a Munro. Our choice was Beinn Mhanach, mainly because the approach along Glen Auch requires several river crossings and in recent dry spell of weather, we were almost guaranteed easy fording over Allt Kinglass. We took enough water to make a swimming pool on the summit

and a new bottle of sunscreen factor +50, hats and sunglasses to protect us from the killing UV.

We didn't like the limited parking area by the start of the track to Auch farm, so we drove 2 km south along A82 to a proper car park (it's often used by ramblers walking parts of WHW). This adds about 3km to overall distance walked, but at least you won't be worried about your car

The rest of the route was as described in official WH walk: marching up the glen, climbing the steep slopes to the summit, then around the lower top and back to the track in Auch Glen:

Track_BEINN A CHUIRN 27-5-18.gpx Open full screen  NB: Walkhighlands is not responsible for the accuracy of gpx files in users posts
The sky was bright and blue from the very start. From the car park, a good track follows the railway for 0.5km before merging with West Highland Way: Allt Coire Chailein was almost empty and we knew we should have no problems with river crossing today:

After 2.5km we reached the crossroads, where WHW crossed the bridge and continues north. We left the right of way here, turning right to join the official WH route for Beinn Mhanach.
Soon came the first river crossing: 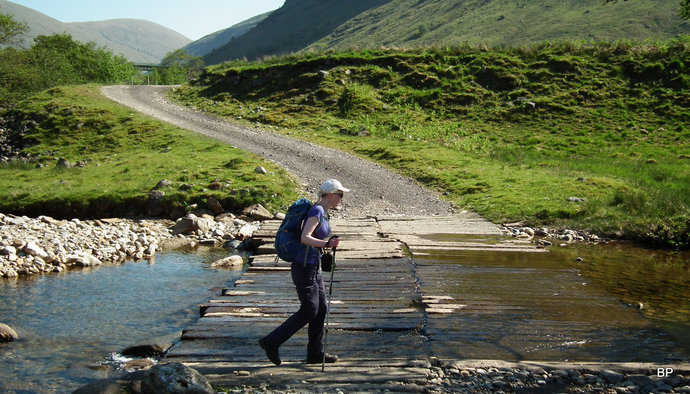 We took a short break under the viaduct, I dunked my hat in the river to keep my brain cool

. The sun was baking us alive! 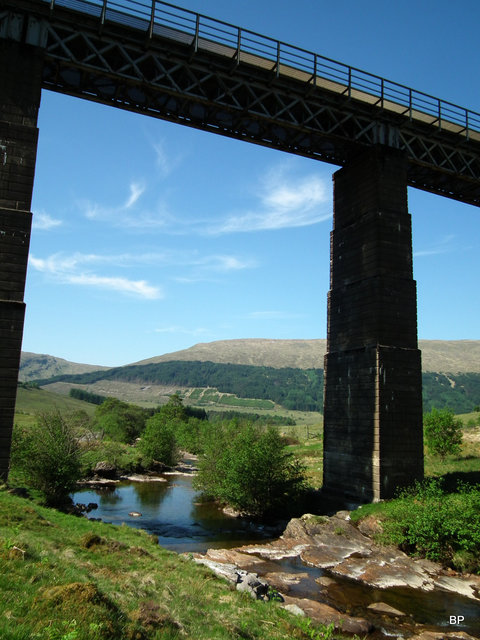 It was easy walking on good track, though we stopped often to drink and re-apply sunscreen. Kevin unzipped his trouser legs but I realized that I couldn't... Ohhh Gromit, it's the wrong trousers!!!

Posing in the wrong trousers: Panther and our target mountain behind! 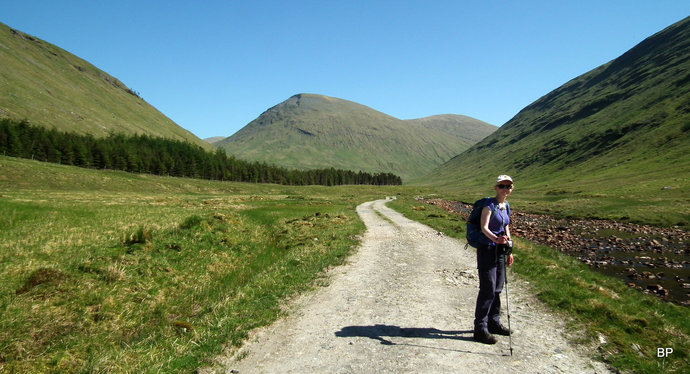 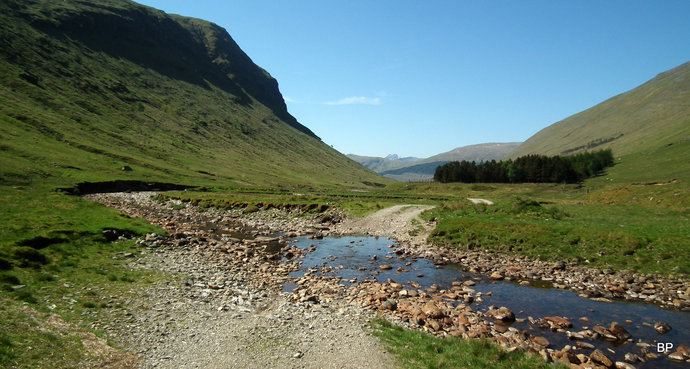 Overall, we counted 8 river or stream crossings, all very easy as there was next to no water left in them. Eventually, we reached the top of the col, from where the track descends towards Loch Lyon. The steep slopes of Beinn Mhanach loomed above us and we knew we had a long slog before us, so we stopped for a breather, snack and hydration (the last point on the list was the most important!). We found a "bench" near the bridge over Allt a'Chuirn: 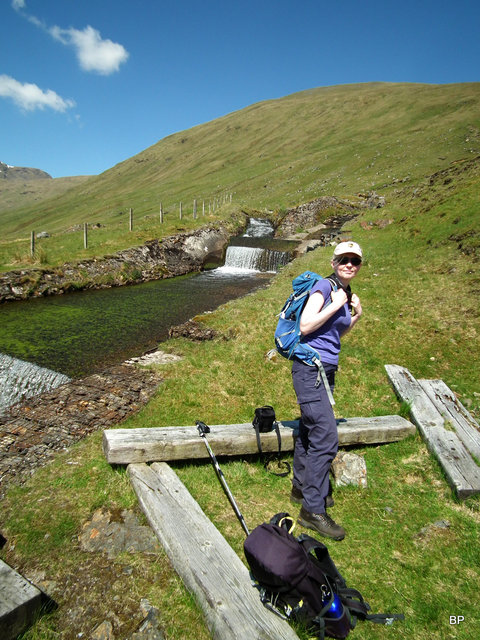 There is no way to hide the fact, that the climb to Beinn Mhanach consists of over 500m of steep slog up grassy slopes. In wet or cloudy weather this would be a boring experience. We had the views at least, but the oven-baking conditions didn't make the slog any easier...

Looking back from half way up the steep ascent. Beinn nam Fuaran in the middle:

We took it steady, knowing that at the end of this "hot pursuit" there was a reward in the shape of our next Munro summit. I kept stopping to wave off annoying crane flies. They might be harmless to humans but I hate them - THEY TICKLE!!!
Get off me, you tickling b***!!!

Nevermind the crane flies, nevermind the heat. Views were getting better and better the higher we climbed.
Auch Glen: 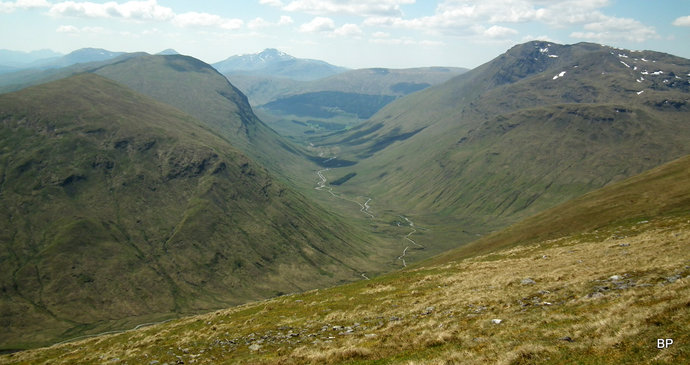 Loch Lyon and the hills behind: Beinn Heasgarnaich and Creag Mhor - our next target in this area. Looked very remote and I wondered how hard it would be to climb them. I got my answer a week later - they are extremely tough mountains especially when done in hot weather. 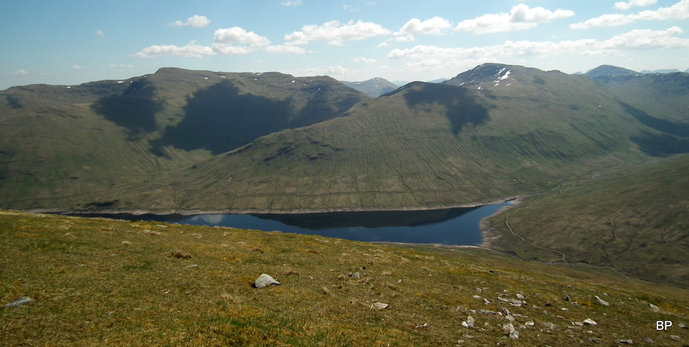 Looking along Loch Lyon to Lawers Ridge on the horizon from near the summit of Beinn Mhanach: 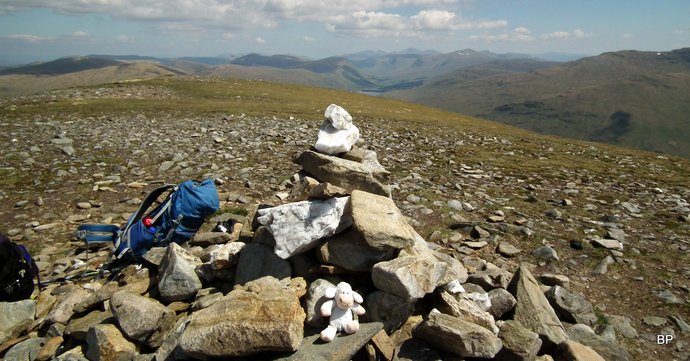 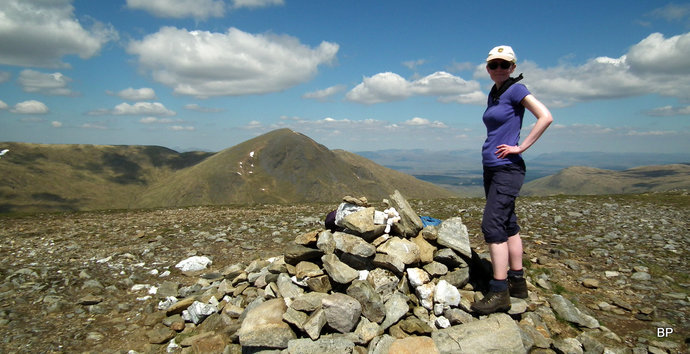 Despite the oven baking conditions, we spent some time by the cairn, mesmerized by the views. Beinn Mhanach is a much better viewpoint than one might expect. There were a few midges and hoards of tickling crane flies but we didn't mind them. I was surprised that midges were biting in such conditions. Usually when it gets hot, they don't venture out. Maybe Beinn Mhanach has a special variety of "baking-resistant" midges

Gazing in the distance...

Panoramic view south-east to Creag Mhor and Beinn Heasgarnich - reminding us that they were still waiting!

West to the ridge of Glen Orchy Munros, from Beinn Dorain to Beinn a'Chreachain:

The easiest way to return is to retrace your steps down the steep slope, but we preferred the more gentle if a bit longer option of circling Beinn a'Chuirn. We should have really visited the lower top but in the killing sun we just wanted to get down as quickly as possible. We descended west to the 849m bealach and then aimed for Lon na Cailliche: 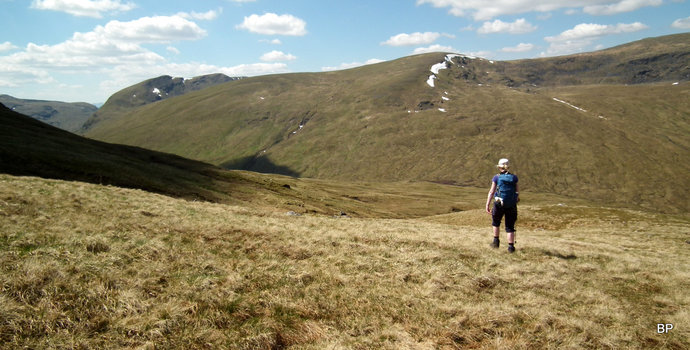 The descent was easy on grass and heather, but on a wet day it would probably be very squelchy. Kevin still managed to slip on a wet patch of moss and went A over T, thankfully falling on thick, soft grass, without any harm to his precious backside

Watch out for slimy patches of moss! 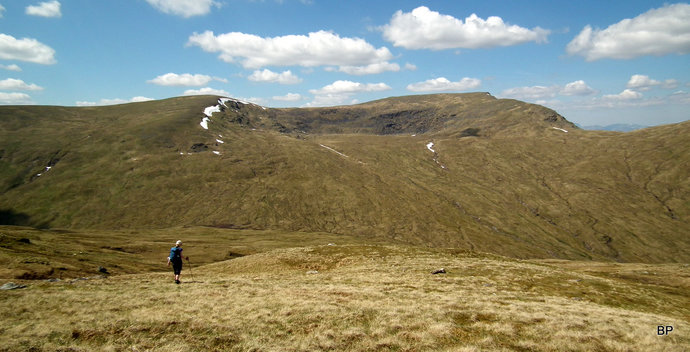 When we reached the bottom of the glen, we started to look for an ATV track along Allt an Loin...
OK, where is that supposed track??? 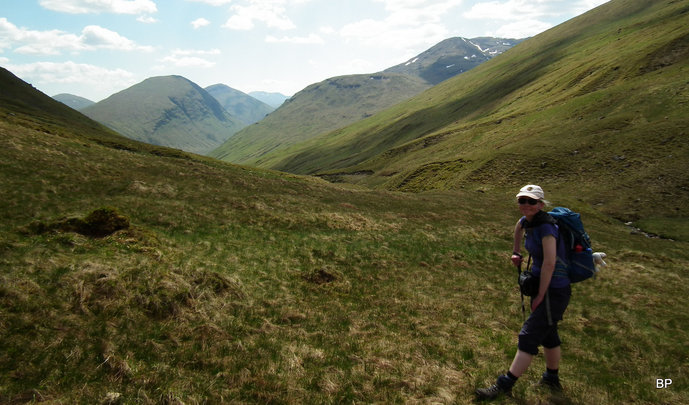 Here it is! it can be followed all the way back to Auch Glen: 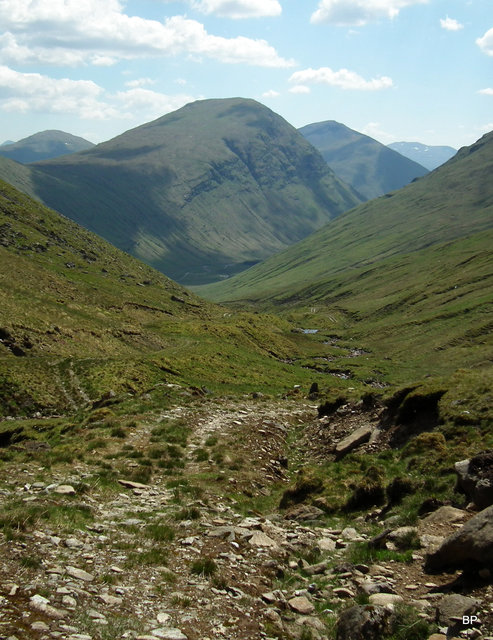 ...and soon re-joined the main track in Auch Glen.The return walk was uneventful and thankfully we had enough water to drink. Later in the afternoon the sky clouded up and we were blessed with some welcome shadow and slight cool breeze. People walking WHW looked at us surprised when we plodded along the final stage of our walk, all tired and sweaty... I wonder what they were thinking, but I didn't have time to stop and explain to everybody that we were not WHW walkers, we have just climbed a very steep hill!

........
Summing up, Beinn Mhanach may not be the most inspiring mountain, but it has good views in all directions, a good feeling of remoteness as it's well tucked behind the Orchy Ridge. Due to multiple river crossings, best tackled in dry conditions

.............
My next story will be the first one of our June holiday wanders. Oven-baking conditions again and this time I remembered to wear the right trousers

The walk will cover two interesting yet very much overlooked Corbetts in the area of Strathcarron. TR in progress.

Re: Panther oven-baked on Beinn Mhanach

Not yet another walker complaining about the good weather, just no pleasing some folk

But seriously, enjoyed reading it - nice report and your usual high standard of photos - cheers