our_route.gpx Open full screen  NB: Walkhighlands is not responsible for the accuracy of gpx files in users posts
Broughton Heights (571m) circular walk including two horseshoes and the other Sub 2000 Trahenna (549m) was today’s high level ridge walk with the KOIR. We packed in quite a few tops today with over 750m of ascent. Broughton heights peaking thru the gap
It was a long drive for us and we were eager to get going by following the John Buchan Way until we reached the 2nd wooden seat at the crossroads. Time for elevenses and the rain came Looking back from slopes of BH
Light but low cloud and drizzle accompanied us as we took the left track gaining height before a right turn and followed the fence continued climbing to the trig at Broughton Heights surprisingly quickly. 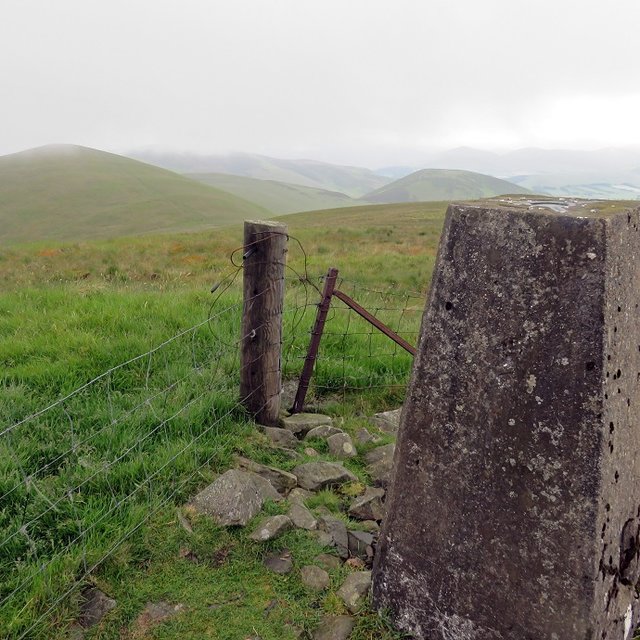 Broughton Heights trig
Albeit with a few ups and downs. Despite the grey weather there were still good views. Straightforward but damp walk to Wether Law
From there we continued north across the grassy moorland to Wether Law, cotton grass aplenty. Brown Dod then Flint Hill
Then turning clockwise to flank the woods via Brown Dod and Flint Hill. Weather still coming and going with the grey matter above descending and rising to block and clear the views, our Scottish weather has returned. From here there is a grand view of the Trahenna horseshoe. Trahenna horseshoe in distance
On the steep fern and bracken descent a meadow pipits nest was spotted with 4 eggs, hope they survive. Farm relic
In the field lay this abandoned farm machinery which one of the group with good knowledge reckons it was well over 100 years old, wonder what stories it could tell.
A marshy trek followed heading in the direction of the farm buildings, glad this was the ultra dry conditions as boardwalks suggest hard going in wet times.
This took us to the next target, another JBW signpost which we left soon after where an ATV track could be seen skirting the worst of the heather before we crossed over a large patch of same to find another track which led up the steep incline to Hammer Head and the fenceline. A good example of 50 steps up, stop for a short breather, look around and repeat until finished the climb. Heading up to Hammer Head, Penvalla in part on right
Penvalla can be seen behind but that is for another day.
Looking back if we had continued with the ATV track we would have reached the fence lower but with a better slope to climb but that is for others to follow or not. Hammer Head large cairn
A large stone cairn would suggest that this is the top but you can see the rising horseshoe needs to be followed before it is reached. More ups and downs but the walking is easier and the views are getting a lot better. Green countryside vista
Looking around the Pentlands are not far away. Tinto back in sight. Moffat hills in the haze and loads of variations of green down below, pleasant views. Trahenna ridge
If it were not for the GPS the high point of Trahenna is easily missed across the fence.
A good track takes us back down to almost where we parked the cars. An excellent walk.