This group of hills above Wanlockhead are best saved for a clear day, thanks to the extraordinary panorama from the summits, so I had resisted any temptation to climb them until last Monday, when the forecasts promised clear skies and decent temperatures. The rest of the week looked gloomy and unpredictable (a prediction which, shock horror, came to fruition), but the skies on this day were clear enough to reveal a view stretching from Ben More and Stob Binnein to the Isle of Man (!) Not all the Highland peaks came out perfectly in the photos, but the view from the day itself was memorable enough.

The route itself is made exceptionally easy by the radar installation road to the summits of Lowther Hill and Green Lowther, but the Southern Upland Way crosses these zig-zags at various points (including one large shortcut not marked on the OS maps). I managed all three of the main hills (the above two along with East Mount Lowther) in just over three hours, which was just as well, as my window between buses was only 3.5hrs! All three are Donalds, but Green Lowther is the only Graham amongst the group. Once I found the Southern Upland Way in Wanlockhead, which leaves the main road through the village and heads East, the whole route was straightforward. Green Lowther is quite probably the easiest Graham, Corbett or Munro in the country thanks to the road (and the 430m head start of Scotland's highest village to boot

), but with the potential for clear views for 80 miles in all directions, I'd still preferably save it for a clear day. I had already given up my hillwalking for the year after a rather unpleasant experience in a storm on Beinn Eich, but considered Green Lowther the exception to the rule. Alighting from the bus in Scotland's highest village, Wanlockhead. The Southern Upland Way marker points the way ahead. To the North-East, Green Lowther is now visible (the summit itself is almost hidden from Wanlockhead). And then, randomly, a meticulously-maintained road appears. Note the perfectly painted road markings and complete lack of potholes. Bizarrely for a hillwalk, I passed more cars than walkers. Sadly the road is only open to vehicles accessing the radar stations. The view from the subsidary top of Green Trough back to Lowther Hill. 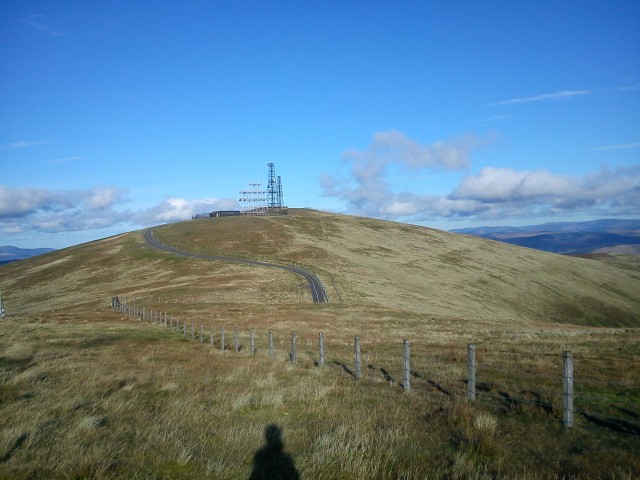 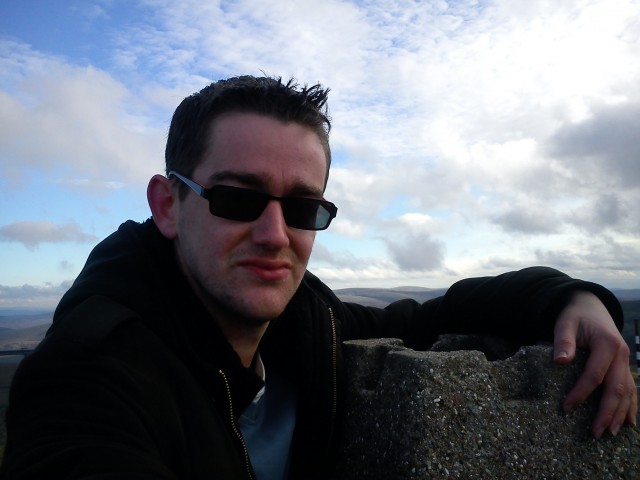 Surely the only trig point of all the Scottish mountains to be reached by a road (although I hear the Ben Nevis Tourist Track is close).

The only person I met in the whole afternoon (except when giving way to drivers on Lowther Hill, of course) was a guy on the summit of Green Lowther who said he was measuring wind speeds to see what kind of conditions his tent could withstand. He said present winds were gusting at around 10-20mph, which wasn't nearly enough trouble his tent, pitched next to the trig point ("I can sleep in that in 40mph winds!", he argued). He then produced a small radio antenna and pointed it to the South. It transpired that he is involved in a scheme called SOTA (Summits On The Air) which rewards users for successfully transmitting radio messages from one summit to another. Points are awarded based on the altitude of the hills, leaving me to compare the past-time to Munro-bagging - the similarities are tenuous but do exist! 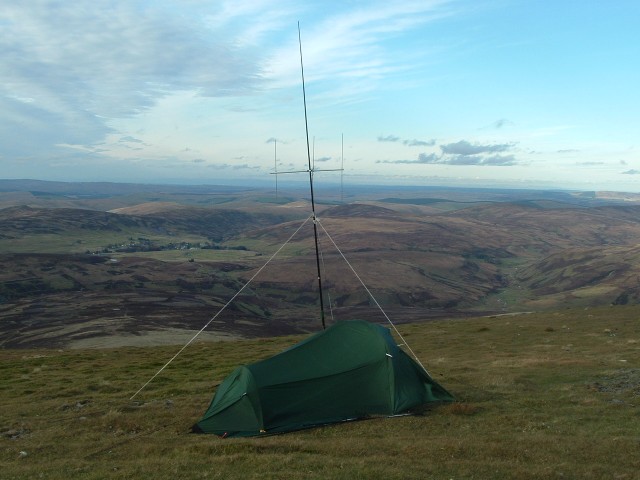 The tent and wind measurer, with Glasgow faintly visible in the background.

He claimed that by climbing Green Lowther (which is visible from many points in the Lake District and Northern Pennines), he could hopefully communicate with other users in England, then Switzerland. I argued that Switzerland was outwith the line of sight, but clearly my last year spent doing an MSc in Surveying hadn't awakened me to the possibility of radio waves bending or refracting at all! The Isle of Arran was visible all day through the haze, 60-odd miles away. The Ochils, Tinto and the Pentlands to the North-East. Zooming in to the South-West reveals the Isle of Man, over 80 miles away. Wanlockhead from the summit of Lowther Hill. East Mount Lowther , the third of the main round of Lowther hills. Lowther Hill from the Enterkin Pass. The first sign of frost on the hills: a reminder that a novice like myself should probably call it quits for this year. The view from East Mount Lowther to Galloway, including Cairnsmore of Fleet, Merrick and Shalloch on Minnoch. 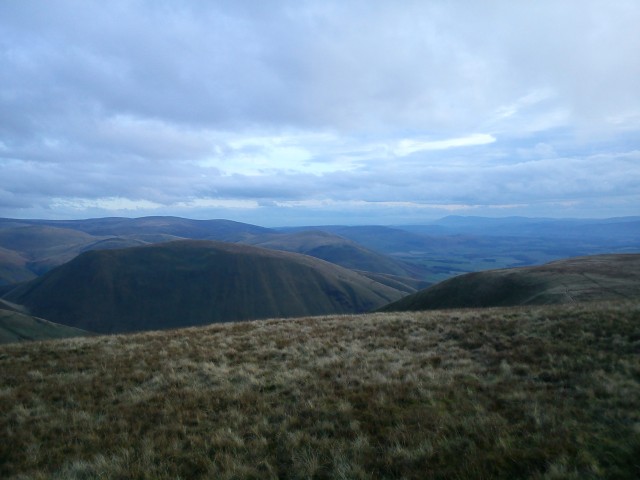 Criffel was visible southwards, but the Lake District was almost clouded out behind it. Back at the Enterkin Pass, the shortcut back to Wanlockhead follows the pylons to the left. The Mennock Pass and the road down to Sanquhar. Cloud sweeps in over the golf-ball-like radar dome on Lowther Hill. Thanks to the road, I was never likely to get lost up here! Back at the roadside. I still had over 1500 feet to descend, but for the final part, I had a bus to help me...

Those look quite nice hills... I've met quite a few of those SOTA folks on the hill before I think - Cairn Mairg in Glen Lyon for a start. You look to have got a lot done in 3 hours!