Munro half century reached on a cloudy Maol Chean Dearg

Munro half century reached on a cloudy Maol Chean Dearg


Did my first munro about 3 years ago when I moved up to Inverness - most of my walking had been in England and Wales before that .... I'm just as happy with corbetts, grahams, subs, coastal walks or whatever though, so didn't really notice my munro count steadily ticking up, until the last few weeks when I got in the 40s. Found myself sitting at 49 when I was pondering where to go today; I had been thinking about one of the nearer corbetts given the weather forecasts were a bit mixed ..... but 49 seemed a little untidy, so thought I'd better make it a nice round 50

By mid-morning I'd settled on Maol Chean Derg as a fairly straightforward sounding option, checked the MWIS, Met Office and BBC weather forecasts (sounded okay up until evening or late afternoon) jumped in the car, and then drove over to (what turned out to be) a cloudy and overcast Strathcarron area. Hmmmm. Not perfect, but at least it wasn't raining yet, and there was a chance the clouds would lift higher.

Only 3 other cars parked at Coulags despite it being late morning on a Sunday in June. I set off up the good track/path, counting my blessings that, on the good side, at least I wasn't having to cake myself in Factor 30. Had the easiest river crossing I've had in a while (I do like a bridge

) and popped my head into the bothy (too full for me to have a proper look in, but seemed to be people packing up to head home). 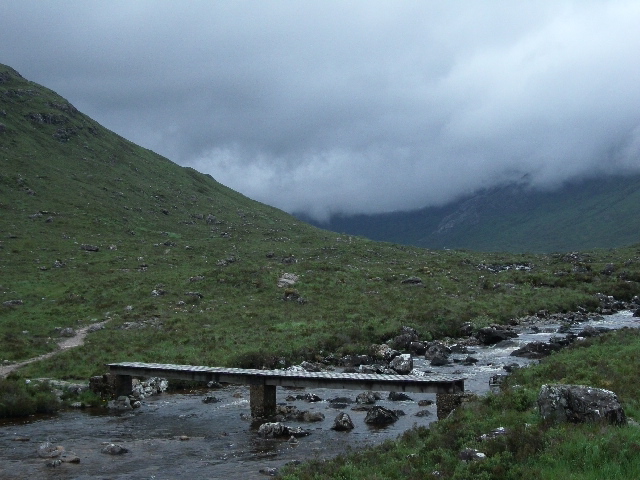 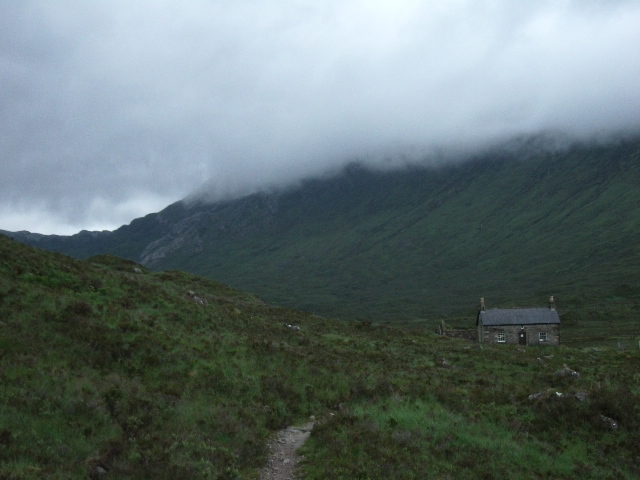 Bothy right beside the path

Onwards through the only boggy patches on the walk, past the Clach nan Con-fionn, and then headed left at the clear split of the path. 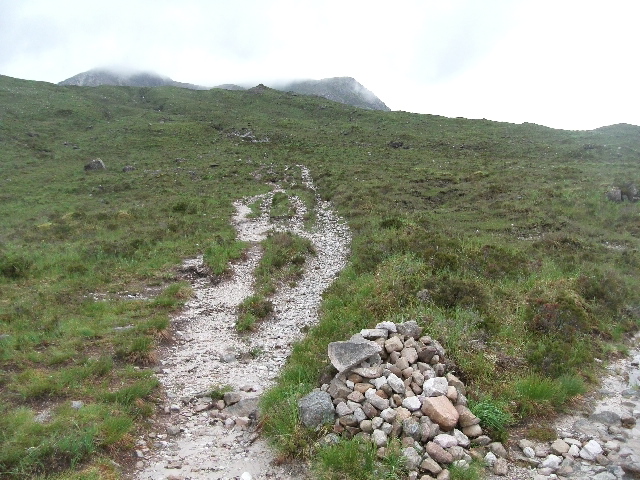 Obvious route left to Maol Chean Dearg with the target above

The mountains were still cloaked in cloud, but there were occasional moments when the cloud went a bit higher and I could see some more of Maol Chean Deag, though never the summit. The only 2 other walkers I saw on MCD at all during the day were spotted at this point, making a descent down scree into the Coire Garbh area rather than the route I was taking (the WH route) up to the Bealach a Choire Ghairbh. Maybe they'd just fancied getting out of the cloud as soon as possible. 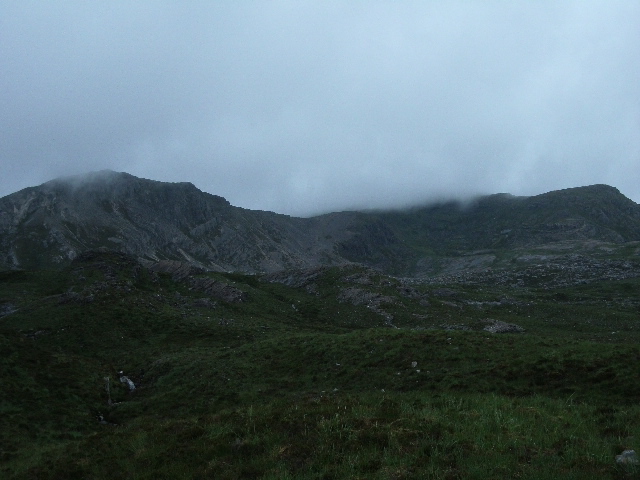 Best view of Maol Chean Dearg I got all day

On reaching the Bealach a Choire Ghairbh, I was hit with the wind, the rain, and the brief but stunning view of An Ruadh Stac immediately in front. It soon disappeared back into cloud, as did my ascent route up the scree to my right. But I could see enough of a route up to crack on, up the steep section, across the rocky but flatter section, then on to some rocky ledges/grass where I completely lost any path (to be fair, the WH route description for this area does state "which could confuse in poor visibility"!) and just tried to keep vaguely in the right direction with my compass. 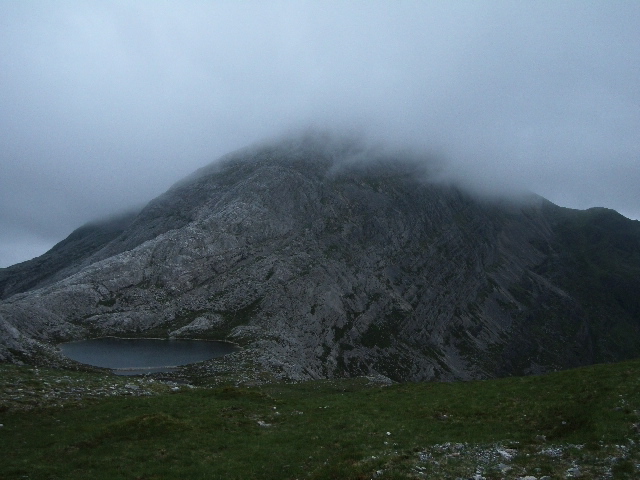 An Ruadh Stac from the bealach 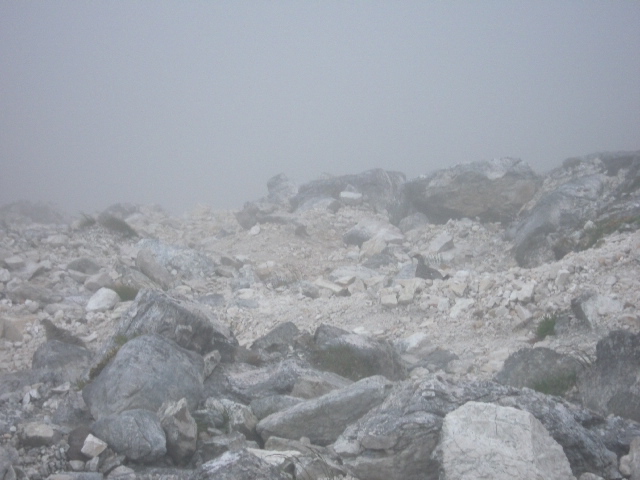 Setting off up a path on the scree slope and into the cloud from now on ...

When a few gusts of wind cleared a bit more of the cloud for me to see further ahead, I saw where I needed to head right to get off the inconvenient knoll I'd ended up on, and back on the plateau at the base of the boulder climb. It was still wet with rubbish visibility, but the wind wasn't bad and I was able to head up without too much difficulty. A couple of small cairns came in handy as I reached the top, something for me to aim for on my return. 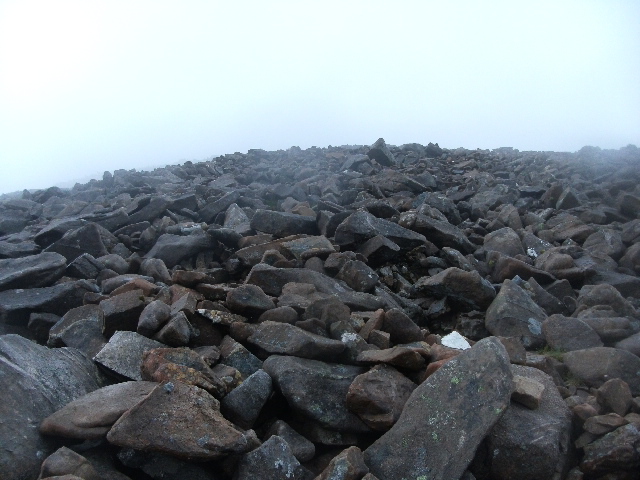 I'm not sure I would have found the summit cairn on the plateau if it hadn't been so conveniently big. I left my walking pole on the ground as I reached the cairn, pointing back in the direction that I'd come up so at least I'd have a clue rather than just relying on compass bearings. I hung around the cairn for a while, hoping for some brief period of cloud lift where the stunning views of Torridon, as featured in other walk reports here, would suddenly reveal themselves. But nope. 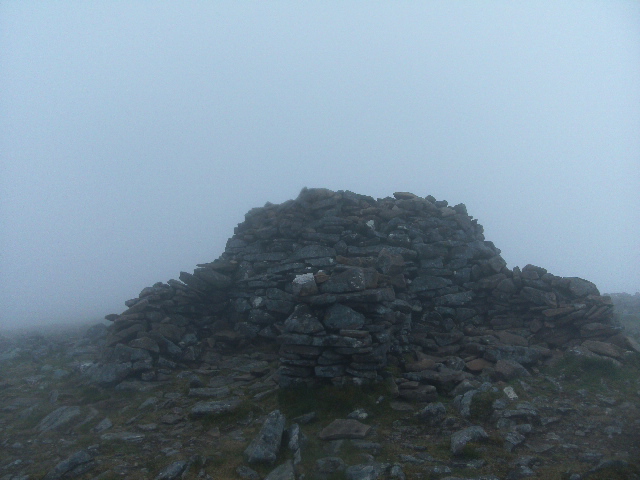 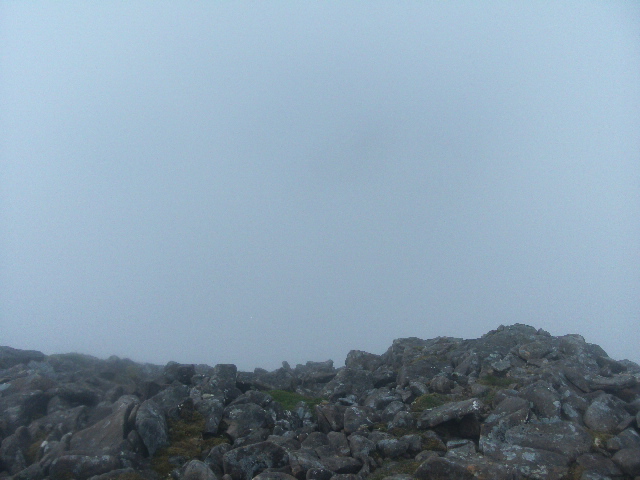 View towards the stunning Torridon giants (I really should have used photoshop ....but I didn't, so use your imaginations!)

So off I set, to more or less retrace my route back for the descent. I was at snails pace down the sandstone boulders, aware that I was the only one on the mountain and it would be an easy place to slip and get injured. I eventually picked the path back up on the lower plateau, and headed back towards the scree descent - at which point the cloud lifted. Not high, not revealing blue skies and surrounding mountain summits - just high enough that I could now see where I was going, wasn't getting wet, and could get views of the immediately adjacent mountains minus their summits. Better than nothing! 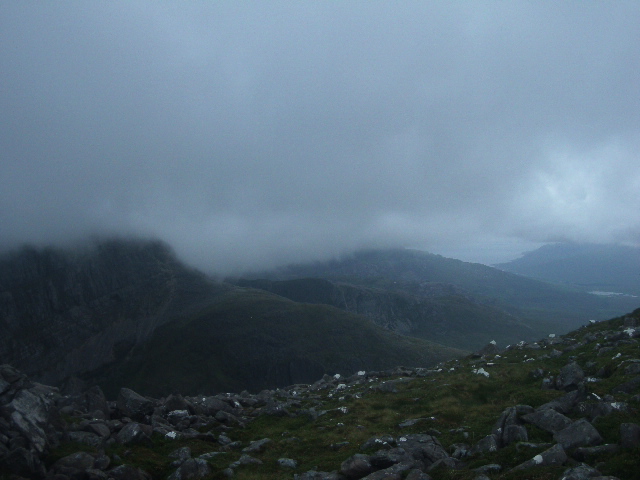 At last, I could see something (not sure what, but something!)

Down the scree path to the bealach, down the stream-like stony path to the glen floor, where I passed this rock .... not the Henry Moore sculpture-like/ Giving the middle finger/Fionn's hunting dogs tether one .... just one that looked like a head. Moss hair, white lichen eyes, mouth crack, even a sort of nose .... it was so head-like I thought from a distance that someone had spray painted it on (... or maybe I was just so desperate for a view of something, that I'd started imagining strange things with rocks ..?! 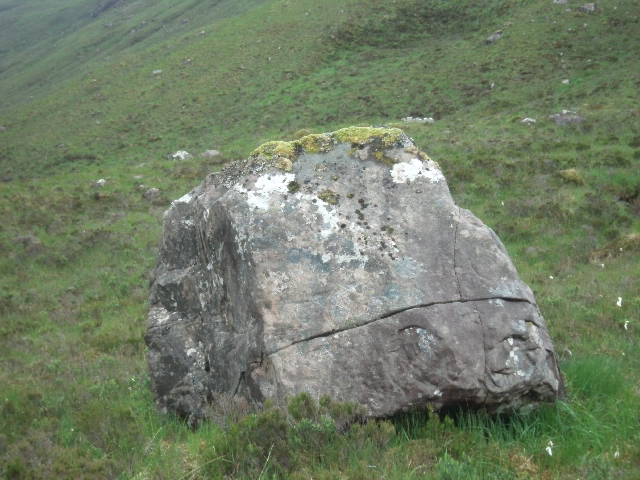 Don't need your imaginations for this, it's clearly a rock head!

Passing the bothy again, I went in a for a quick look with it empty - seemed pretty clean and spacious, and a guy arrived at the same time to spend that night (or two), saying he was probably going to do MCD and ARS one day and Sgorr Ruadh and Fuar Tholl the next. I had been thinking as I descended MCD that Sgorr Ruadh and Fuar Tholl looked a possible option from this side rather than the Achnashellach route. Hope he got good weather for his walks, they'd be great routes on a clear day

And that was that. Probably wouldn't have done it if I'd known for certain the cloud would be so low as I like to see where I'm going and get views from the top - I'm happy to go up a smaller hill in that case. But although I missed the views, as it was, it was still a decent walk, wasn't lashing down with rain or struggling with gale force winds, and I never really felt lost or disorientated even when the visibility was bad.