I decided to make use of the weather today and visted Great Knoutberry hill. I had tried to bag this HEWITT before but failed in the mist and rain, although today I found out that I was only a just short by about 5 mins! Ah well. Todays trip started at Dent station and proceeded over Great Knoutberry, reaching the summit in about an hour (11:20) after going slightly awry. It was very boggy at the top. I proceeded down to Arten Gill moss to pick up the bridleway. It was completely swamped, and there was no evidence of a path at all. I eventually made it down to Newby Head, for the start of the Ribble way path up to Dodd Fell at abot 12:45. I then pressed on up to Cold Keld gate, taking the path from the Gavel Gap, reaching the gate there at 13:40. I then tried my luck with Dodd Fell, but got lost. I made it upto the wall at the 600m contour line on its southern flank, but could not find a hole in the wall, or any way to continue up (wall was 8-9ft high!). I then abandoned this option and headed back as it was getting dark, and I was getting tired. The weather had been mostly cooperative, did look like it was going to rain, but I was spared. I arrived a the Ribblehead inn/station at 16:20. All in all a good walk, but rather aggitated I came to within a few metres of bagging another HEWITT, but having to turn back. More for me next time!

I felt enlightened to come up with a bit of poetry in reflection of the flooding and boogy conditions witnessed today:

"If theres flooding on the river Ouse,
like the flow of saturday night booze,
Then against bogs you will inevitably lose."

Its not wordsworth, but it seemed to sum it up nicely at the time...when both my feet were covered in peat!

PS. Despite Great Knoutberry Hill being the king of false summits, it is well worth a visit with views extending out to the Howgills, Wild Boar Fell, Upper Penines, Lake District and the 3 peaks. Some photos: Looking north to Baugh Fell and G.K.H at sunset View towards Pen-y-ghent from the monotonous and boring Cam Road. 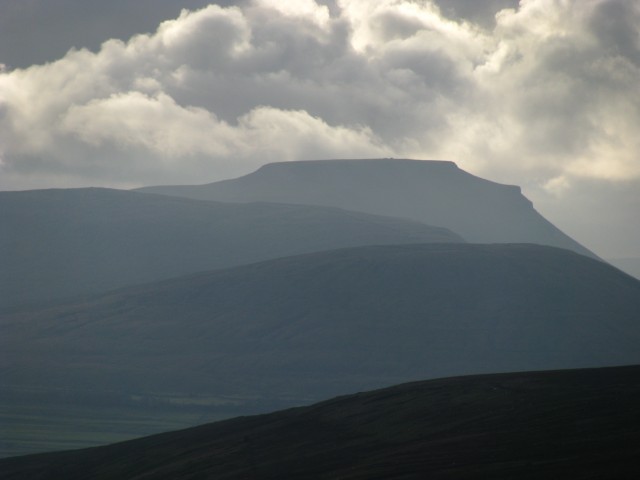 The boggy heap that is Dodd Fell Speed bumps au natural...what a pain in the arse. Great Knoutberry Trig point, with Howgills and Lake District in the background The cairns that grace the western flanks of Great Knoutberry Hill Wild Boar Fell, Mallerstang valley and the Upper Pennines peaking above the clouds Starting off from Dent station

Re: Bog surfing in Dent/Ribbledales

Like the 'Moody Ingleborough' pic and the witty ditty!

I did the whole of the Cam Road I think a few years back with my Dad - enjoyed it myself...