I want to ride my bike

I want to ride my bike


A shorter TR this time, about a bike trip we took the day after climbing Beinn Heasgarnich and Creag Mhor. Originally it was supposed to be a day off, resting after a big round the previous day, but knowing us, with good weather still in charge, we got tempted by a wee bike ride

The main target was to tick off Beinn na Muice, a sidekick Graham of Strathfarrar Ridge. Some supermen add this hill to the Strathfarrar 4, but we preferred to do it separately, combined with a cycle up and down the glen from Struy. Because we live only 15 min up the road, we could sleep a bit longer in the morning

With bikes strapped to the back of the car, we arrived at the car park shortly before 10 am, got ready and started the cycling part.
We planned to get as far as the dam (or just below the dam) live bikes there and walk up the stalkers track (used as a descent route when climbing the Munros) to the point where we would be able to find a good line to climb the eastern side of Beinn na Muice, then traverse the hill east to west, descending to Loch Monar and finally, walking back down the road to where we left our bikes.
The stats given above are for the whole walk + cycle. If you decide to drive up the glen and do just the walking stage, it's 8.6km distance and 602m of ascent.

Track_STRATH GRAHAM 07-06-18.gpx Open full screen  NB: Walkhighlands is not responsible for the accuracy of gpx files in users posts
Initially, it was all going smoothly, but after a few km of cycling, my bike suddenly started to annoy me. The gear box decided to play strange games with me, not switching gears when I wanted, switching them when I didn't. Try going up a steeper section on max high gear

I was so angry! Not only am I a rubbish cyclist, now my own bike is going on strike!
On the other hand, I shouldn't blame my vehicle, it is 10 years old and falling apart anyway, didn't cost a lot in the first place (cheap Hallfords own brand) so it lasted more than it should

Kevin helped me as he could, he tried to adjust the gear box but decided that "it - the bike - was sh*te and he'd better buy me a new one". I didn't discourage him from that idea...
My fight with the bike lasted all the way along Glen Strathfarrar, at some point I was worried that walkers might overtake us

We didn't take the big bridge camera just to save weight, so all photos were taken with the compact Fuji AX650 and some are snaps from video recordings.
Glen Strathfarrar and Sgorr na Diollaidh in the late morning:

Allt Toll a'Mhiuc, no water in the stream: 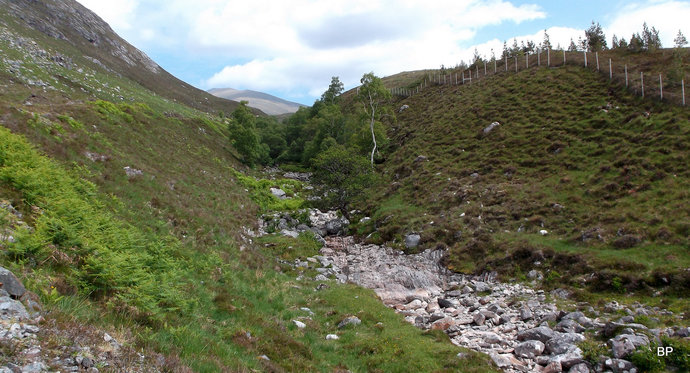 Looking down the track to Mulalrdoch Munros across the glen: 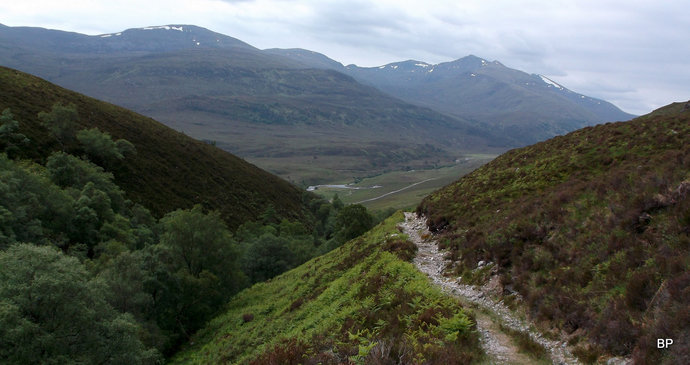 Just above the Eas na Muice waterfall, we stopped to refill our bottles: 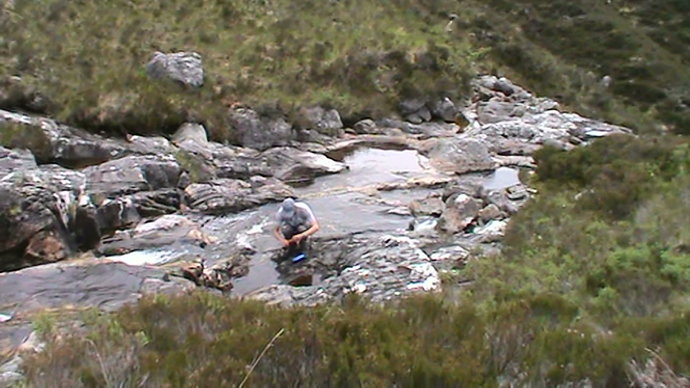 The eastern face of Beinn na Muice looks very steep and forbidding. The SMC guide book mentions something about a narrow gully which can be followed up the slope and here it was, bang in the middle: 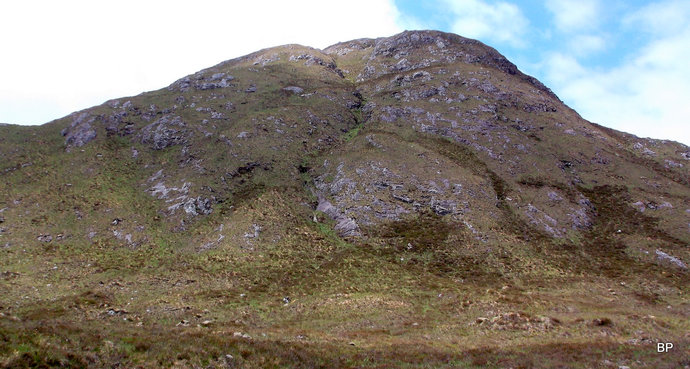 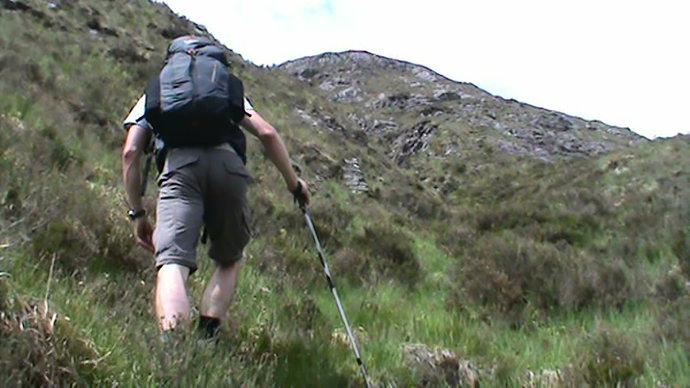 I had no choice but to follow. Fortunately, it was dry so even the steepest sections were still OK. I can't imagine tackling this slope in snow or on a very wet day. You could easily slip and tumble all the way down to the waterfalls 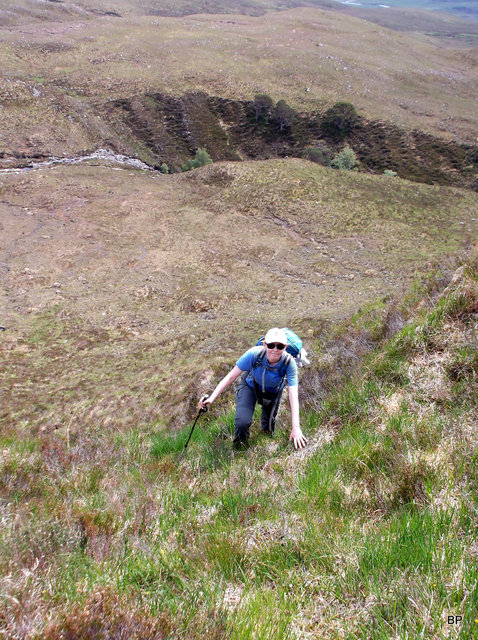 We started in the gully, but had to move to the left hand side to avoid a short vertical section. Later we returned to the gully as it offered the easiest climbing, despite looking very, very steep 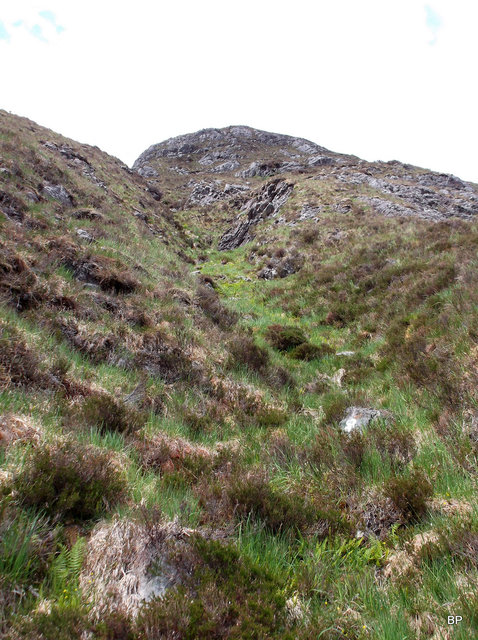 After about 200m of tiring ascent, the angle eases off and the gully widens to offer less arduous ascent: 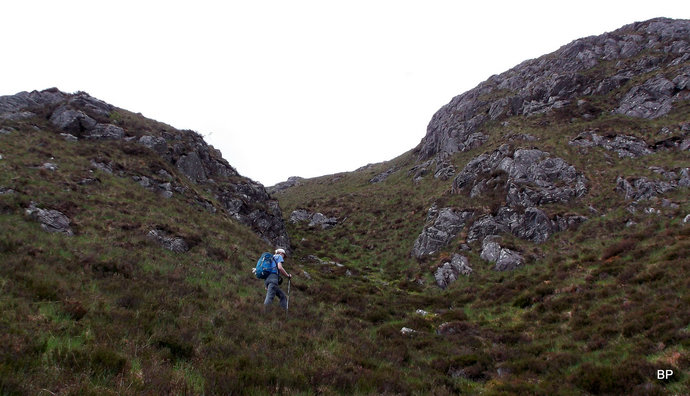 Despite high cloud it was still quite warm and humid, we stopped often to top up fluids, also to check our legs for ticks. Kevin who was wearing shorts today, was especially concerned. Ticks seem to like him more whereas midges prefer me

I guess there has to be balance in nature 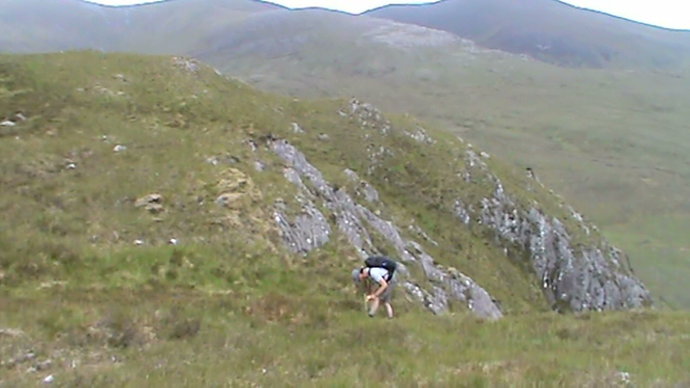 Higher on the ridge, we enjoyed lovely views down to Glen Strathfarrar: 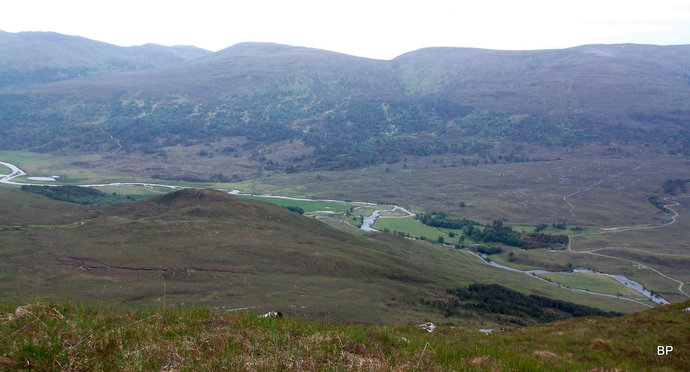 ...and to the surrounding hills. Like the vertical face of Sgurr na Muice to the north: 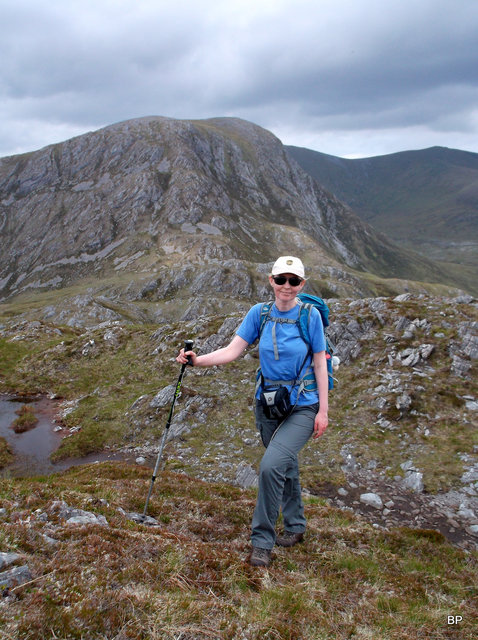 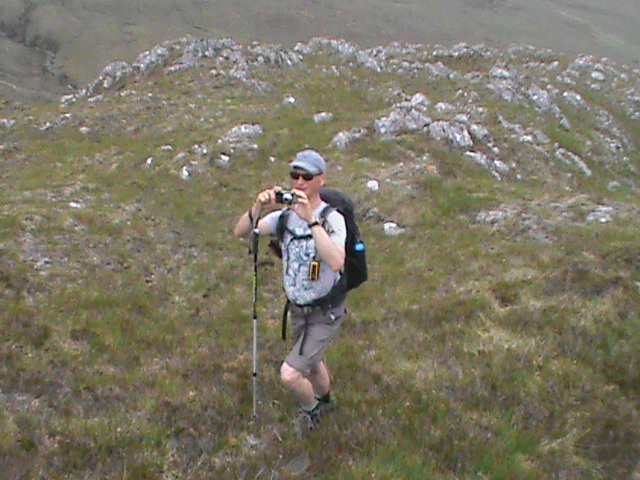 One more gully to explore:

Summit in sight - a pleasant stroll on gassy ground with scattered rocks: 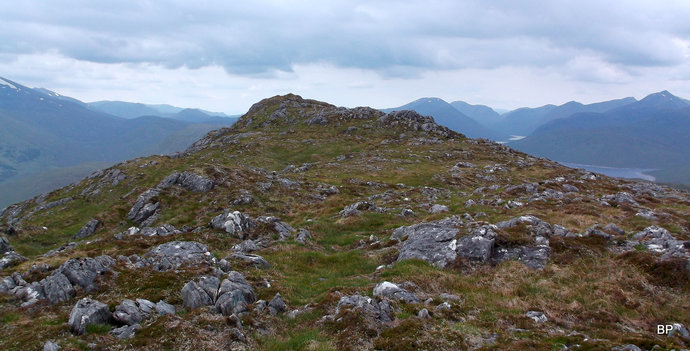 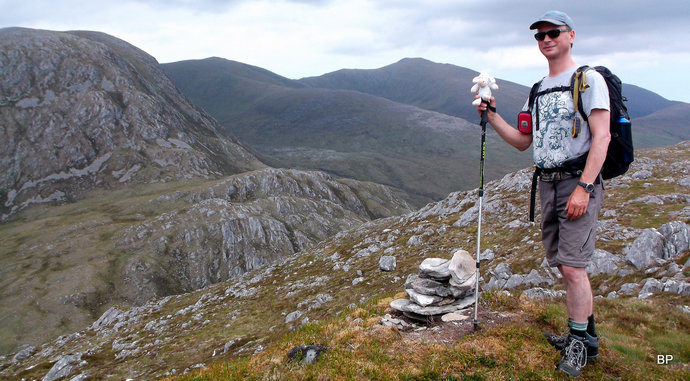 It didn't take us long to reach the summit so now we could sit down, stertch our legs, rest and enjoy the views. Indeed, Beinn na Muice is an excellent viewpoint, despite being just short of 700m. The best panoramas are to the west, to Loch Monar and surrounding mountains:

Mullardoch Munros and Monar dam below our feet: 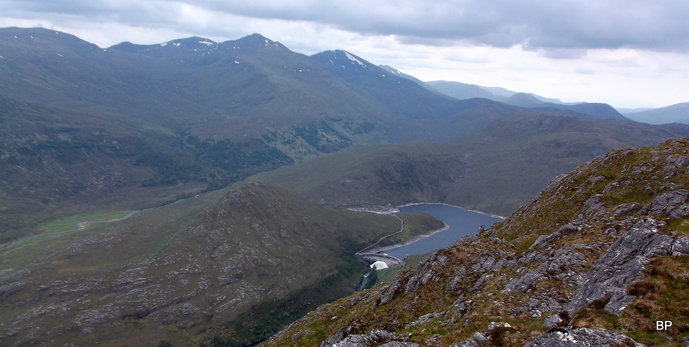 To the north, Sgurr na Muice and Carn Eiteige (an obscure top of Strathfarrar ridge) steal the show:

The best part of the walk is definitely traversing the ridge west towards Loch Monar. Ridge walking is one of the things that Panthers like best!

We enjoyed hopping from rock to rock, climbing every little outcrop and gazing down to the depths of Loch Monar... 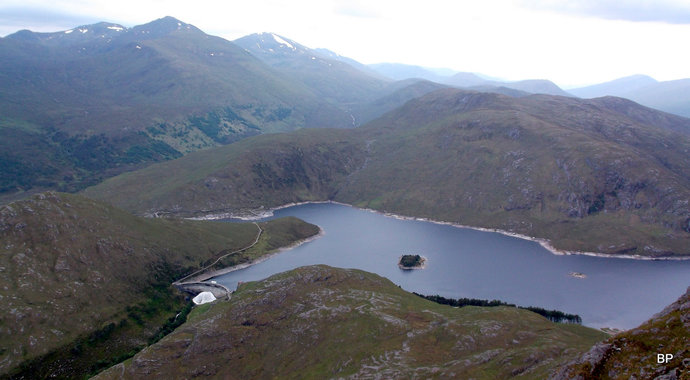 The ridge continues for about 1km, dropping the height slightly as one nears the western end. It's a superb way to give justice to this wee hill: 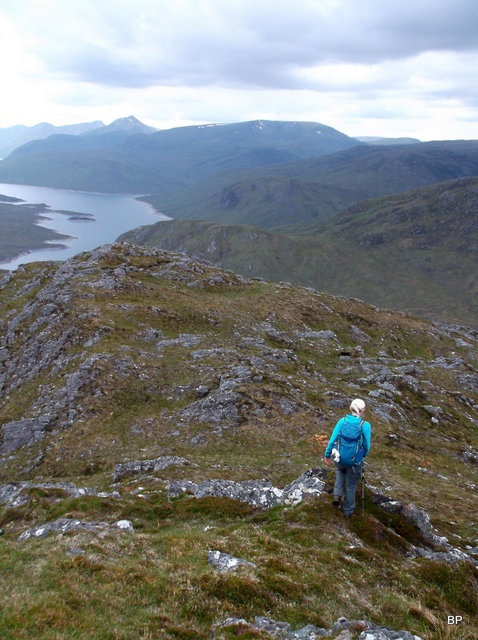 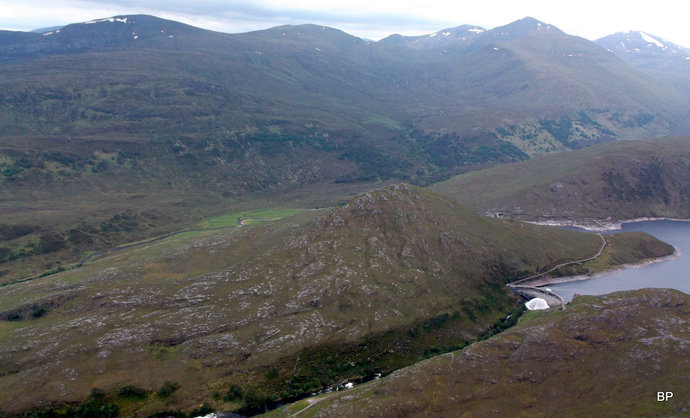 The final descent is steeper, but nowhere near as steep as the ascent route, so I would recommend the east to west traverse rather than the other way around, unless you really want to make your knees sore

We turned south as we descended, to join the beaten track just before Monar Lodge: 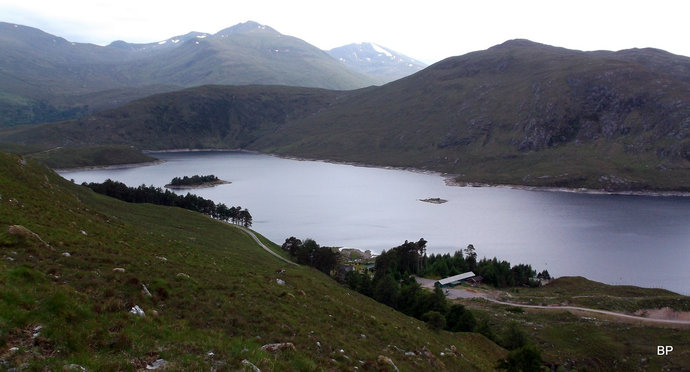 Loch Monar for the last time: 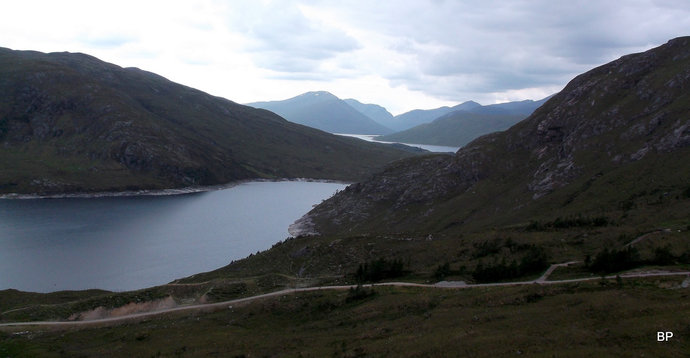 Finally, we walked to the dam, where we stopped for a fountain display 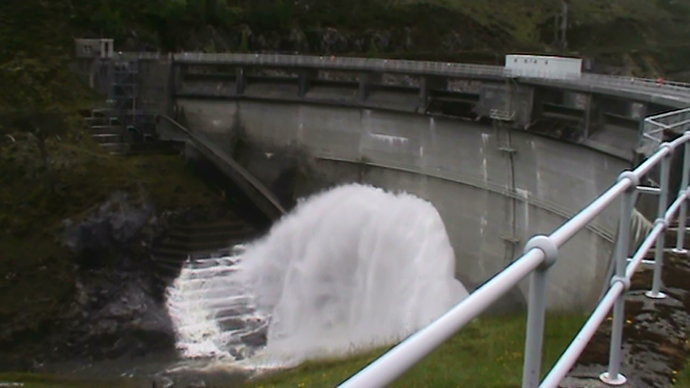 Eventually, a 2km walk down the road reunited us with our bikes. As we were getting ready for the cycling part, a single walker descended the stalkers track, after doing the 4 Munros. We started chatting and he said he remembered us from Walkhighlands reports

He also mentioned meeting The Mighty Weasels the day before, on Ben Hope. Well, of course, Walkhighlanders are everywhere now

We got the bikes going and cycled back to Struy. My vehicle began to utter squeaking and screeching noises en route and still refused to change gears when I wanted to, but I fought bravely and returned to the car successfully if after spitting out a few f** words. Kevin said he'd have a good look at my bike at home but frankly, he was convinced it probably will have to be replaced. A new bike! Hooray! I better behave now so he doesn't change his mind

.....
As for the Graham, well worth doing. Looks obscure but the ridge is fantastic and views are good in all directions. The circular route can easily be fitted in the hours when the glen is open.
.......
So that was the resting day - the Lazy Thursday

On Frantic Friday we returned to Loch Arkaig to tackle a notorious Munro in the middle of nowhere. TR in progress.

Re: I want to ride my bike

Some cracking views there. Just shows that one can get some of the best from most modest of hills. The area north of Mullardoch I still have to get to...

Re: I want to ride my bike

Alteknacker wrote:Some cracking views there. Just shows that one can get some of the best from most modest of hills. The area north of Mullardoch I still have to get to..

It is a great viewpoint indeed, I was surprised how good it was! One of the forgotten lower hills, it only has 56 recorded ascents on WH. What I like about the less frequented summits is the silence and solitude. You're not likely to meet anyone!

Another very obscure Graham we did last week (still to post my TR on that) was Druim Fada, the Loch Hourn one, has only 38 recorded WH ascents and it is one of the most magnificent ridges I have EVER walked. Sometimes less means more