Today probably wasn't going to match yesterday's eventful trip to St Kilda, but nevertheless we had grand plans for a circular tour of South Harris. My foot was pretty much healed, so we also wanted to ramp up the walking with a short hill walk up Ceapabhal near Leverburgh. Mostly cloudy skies first thing were a bit of a departure from the blue skies we'd been getting accustomed to, but they we forecast to break up late morning and a trip to the Seallam! Visitor Centre / museum near the start of the walk filled the first part of the day. On the way to the start of the walk we picked up a fish pie (as in, the pasty kind) to take up with us from a little honesty shop called Croft 36 - unstaffed, and pies freshly baked every day

The route shown below is the standard WHs route, but we varied the first section by following the west side of the peninsula, taking in two beautiful beaches. I couldn't be bothered to redraw it

Most of the photos are from the return journey as it was sunnier then, but I've rearranged the order so they show the route from car park to summit:


ceapabhal.gpx Open full screen  NB: Walkhighlands is not responsible for the accuracy of gpx files in users posts

This area is supposedly famous for machair, but I don't think it was properly flowering yet. Except this random patch near the start, behind Traigh na h-Uidhe: Scaling a fence seemed to be required to continue along the coast, though on the way back we found a stile. There was a faint path most of the way to Traigh na Cleabhaig, which had good views of this lunchtime's target: Trying to get excited about the machair, but it looked suspiciously like daisies to us These terns must have had nests nearby as they weren't at all happy with us being on the beach. They'd just started to go into dive-bombing mode when we got to the end of the beach and joined the track (and WHs route) along the shore. A few hundred metres later, just before a gate with a view of the next beach, you can head right (don't go through the gate) to a nearby stile / pedestrian gate which gets you across the fence to the open hill: Pathless ground ahead, but not too steep, short grass and dry underfoot: Bits and pieces of path eventually turned into a proper one just as the gradient became steep enough to require one. Views back were getting better and better: 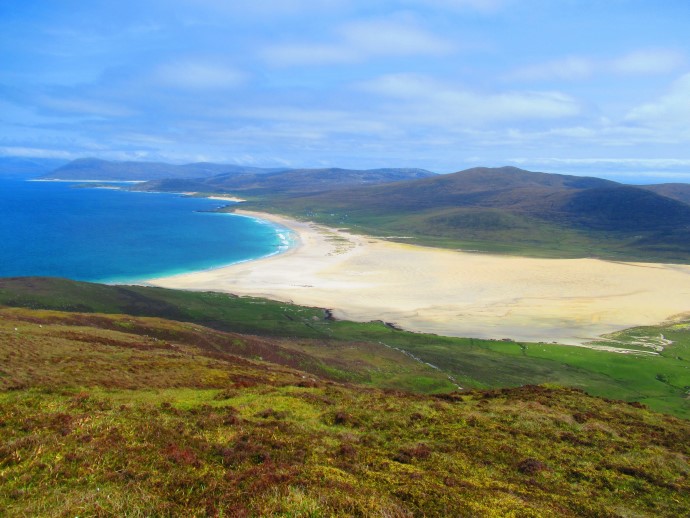 Trig pillar (not quite at the summit): Way out west - St Kilda was just visible through the haze, though not visible in the photo: The cloud over Harris had pretty much all gone now, but it was still cloudy over the Uists: We didn't stay long at the top as it was a bit busy for our liking - i.e. there was one other couple there - so we headed a little way back down and tucked into our delicious pie overlooking the beaches. Life was good.

An uneventful stroll back to the car park. Verdict: an excellent walk. Next stop Leverburgh, where a burger from the "Butty Bus" had our name on it for lunch-part-II. We couldn't help stopping off at the mini-supermarket just to marvel at the size of it - a few days in Tarbert does that to you - and we were glad we did, because the top floor of the supermarket was home to the Harris Millennium Tapestry - worth a look. Leverburgh looking lovely in the sun: After lunch it was time for the road to Rodel: it's church (St Clement's) is well-known, but the harbour is also worth stopping at: Tune in next time for an afternoon along the Golden Road and exploring Scalpay... report here.

Love this hill. Great reminder of climbing it. We went back to Harris end May, beginning June when we strolled round the bottom for a bit, but I see we climbed it another year at the end of July, and that's when the machair is in evidence: it may get better(or have been better), I don't know. Have to go back, though we have been there 9 times already in pursuit of all the Marilyns. Two people too many?....We are a bit that way inclined so am sort of worried about visiting the Lakes this summer, where a few years back we saw more people before 8 am up Blencathra than we saw in Scotland all year. 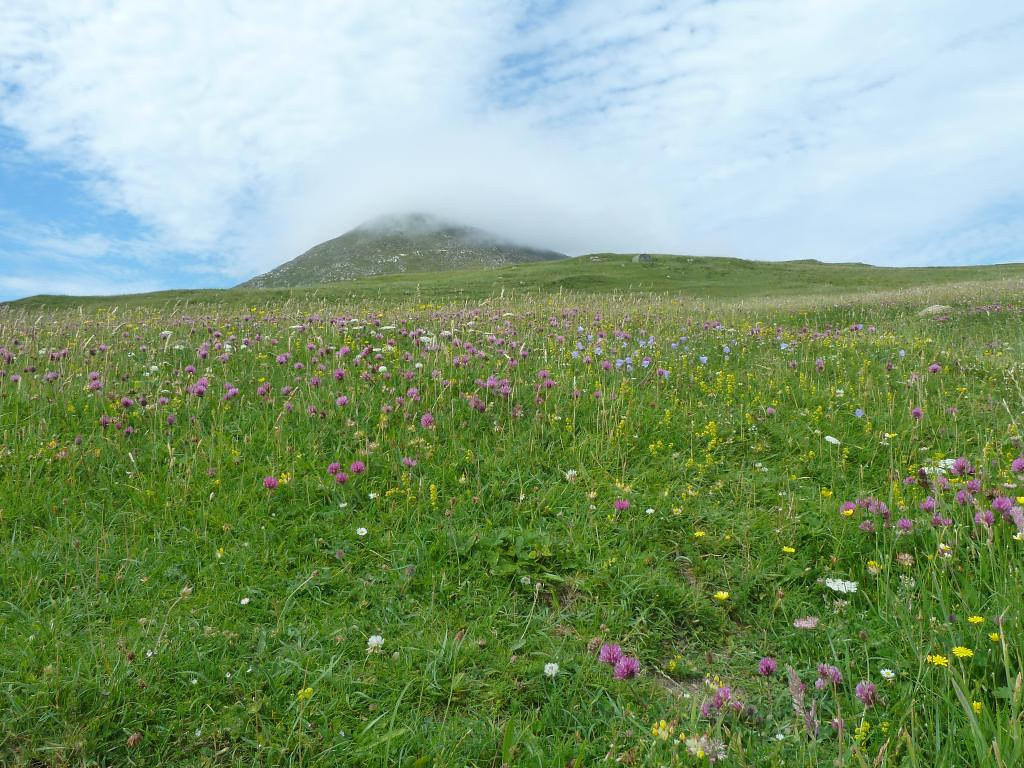 Ahh that machair photo looks much better! July next time then...

I grew up visiting the Lakes quite often. It does get busy but the less famous hills are still quiet...