A week in Spean Bridge gave me the opportunity to explore lots of new territory (for me), and a short drive in the morning sunshine to Loch Laggan was the prelude to a fine circuit of Creag Meagaidh.

The well made path through the regenerating forest soon revealed excellent views to the south. Mist was still swirling above the Coire Ardair ahead. Hoping that it would clear as the sun rose higher in the sky, I decided to do the Walkhighlands 'Creag Meagaidh Circuit' in reverse - that is, walk along the corrie first, then up to Creag Meagaidh, leaving the ridge walk to Carn Liath for later in the day. The dramatic cliffs at the end of the corrie were soon within sight. Eventually the path ran alongside the fast-flowing Allt Coire Ardair. The easy going continued up to the tranquil Lochan Coire Ardair with it's spectacular backdrop. Something told me that the next part of the walk, up to the Window (far right in the photo), was going to be a bit more taxing. The patch of snow and the grey mist looked distinctly uninviting. At least the stiff walk up to the Window continued to provide excellent views of the massive crags. Higher up the weird calls of ravens echoed around the cliffs. The Window was as cold and murky as it had appeared from below, but as the path rose up onto the high plateau above the cliffs there were superb views down into the corrie with its lochan. The plateau was a different world after the corrie and the steep climb. Patchy mist added to the strange feel, although it didn't seem to bother one local resident. How do frogs survive up here? Suddenly Mad Meg's gigantic cairn appeared. In the mist it was not clear that the summit was still some way ahead, except that the trodden path carried on straight past the cairn. The next cairn was a more convincing summit, especially as the mist cleared from time to time to reveal views to south and north. Heading back towards the Window, I was treated to a glimpse of the summit ridge through the mist. A patch of snow appeared to have a faint circle engraved on it. Is this due to the underlying rock of has it been created by the local wildlife? The climb to the top of Stob Poite a'Choire Ardair was soon accomplished, but the mist continued to roll in from the north. 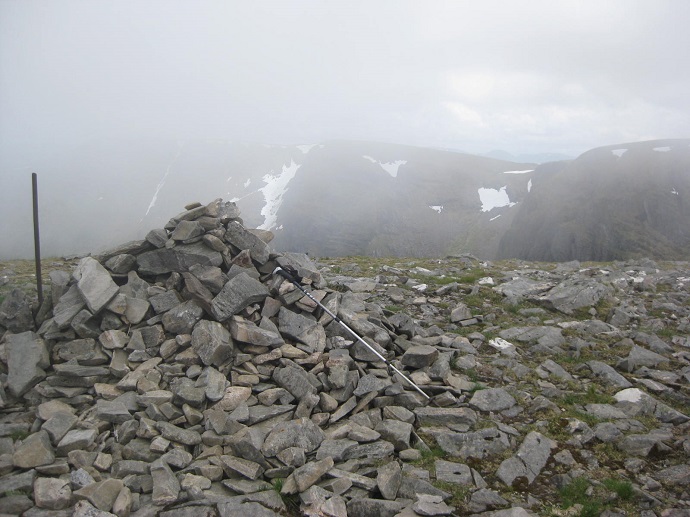 Gradually, however, it began to give up, and the cliffs on the other side of the corrie were revealed. With dry grass underfoot most of the way, the undulating ridge was a delight to walk. The cliffs at the head of the corrie were moving further away with each step. From the summit of Carn Liath, attention was drawn to Loch Laggan far below. With the mist now long forgotten, a view as far as the distant Cairngorms was even possible. The direction down to Loch Laggan and the car park was clear even though there was no obvious path at first. In the dry ground conditions the slopes back down to the well made path in the corrie presented no difficulty in the late afternoon sunshine.

Overall this was a superbly varied day in the hills, with a fantastic corrie to start, dramatic cliffs, a rather eerie high plateau, an excellent ridge walk and a very pleasant return to base in benign conditions.