As I get closer to my 100th munro I've been trying to knock out some of the Arrochar/Trossachs area hills. Saturday I was up and down Ben Vane in a Monty-like rush, 4 hours flat, but sadly there were no views in the damp mist. Sunday I arranged to meet Gammy Leg Walker and Mr & Mrs Jockstar for a trip up Beinn Narnain and Beinn Ime. After a bit of a late start we were warming up the legs as the path meandered through the forest above the car park. The views back to Ben Lomond and down Loch Long were fantastic. Higher up the terrain became more interesting and some of the smaller scrambling sections were reached. This is just a warm up to what is to come I explained to Su. Just past halfway up we were rewarded with our first view of the Cobbler, what a sight! It looks alien to this area I have to say, but I'm dying to get up it now. After the initial easy scrambles we made it to the flat spot below the imposing Spearhead. Gammy and I assured a slightly nervous Su that the path looked worse than it actually was and that we would stick together and get up in no time. Meanwhile, Jockstar's eyes lit up, he gets this summit fever look in his eyes sometimes, especially if a scramble is involved

. So up we went, taking our time to make sure everyone made it through the slippery steep bits. The cloud was really closing in at this point which made the towering Spearhead look all the more daunting. Upon reaching the bottom of the gully I assured Su that it would all be over in a matter of mintues. So up we went. About midway up the gully I stopped to help Su up a tall section of rock and she was shaking nervously as I pulled her up. The worst is over I said, well done! Just a short bit later we were at the trig point on Narnain and Su had a huge smile on her face after getting through the Spearhead. 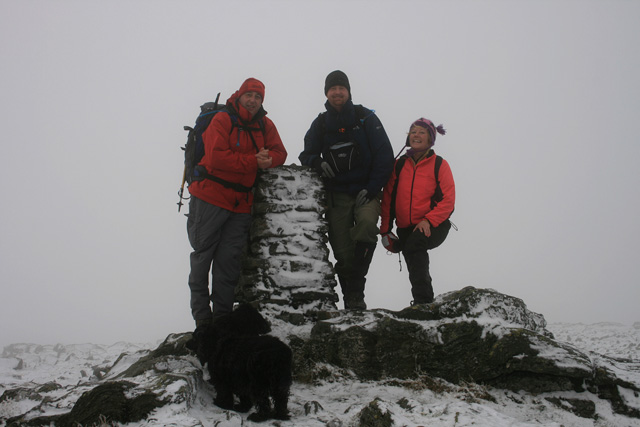 After a quick lunch break we made our way down to the bealach where Gammy and I decided that as a group we would not have enough time to tackle Beinn Ime. So the decision was made to head back around the Cobbler and back to the cars. Conditions were deteriorating and the light would have faded before we made it back if we had tried Ime so it was the right call in the end. There were loads of people, mostly in jeans and trainers heading up the path toward the base of the Cobbler as we walked out. Hopefully they weren't planning to attempt a climb at this stage in the day. Overall this was really a fun day out with some great company. Just to see the sense of joy and accomplishment on Su's face after reaching the top of Narnain was enough to make this a great day on the hill. It was also good to meet Gammy and his fine and most obedient spaniels. Now I can't wait to get back and combine Beinn Ime with the Cobbler!

nice pics especially the hdr ones,i would love to know how to do that.

Stretch wrote:There were loads of people, mostly in jeans and trainers heading up the path toward the base of the Cobbler as we walked out.

I noticed that when i was up last year on the 14th of november,its surprising how many people where walking up the path very late on in the day.
I have to congratulate the 3 of you..... how on earth did you get gammy leg to smile in his summit pic

Heh Stretch - That camera takes some great photos and the one of Su (AKA Mrs Jockstar) coming up that scramble tells its own story.

I suspect that smile will be Mrs Jockstar's face for many a week ahead!

Maybe we're missing something about the attire of the afternoon walkers that when the temperature dips they feel the need to adorn jeans, t shirts and trainers...after all we're well hard in Scotland

Loved the other photo's and along with GLW's photos I might find it difficult to find one as good as you two guys have took. Still watch this space.....

Another good day, and 2 more bagged

The Cobbler will test you yet again, threading the needle to get to the summit is fun!

Yeah, some cracking pix Stretch. Do you use a tripod for your HDR pix?

The Cobbler just looks plain evil in that HDR.

Nice report Stretch,
Date walked should be the 7th ? First picture is stunning. Full of colour whereas the cobbler hdr looks like its the entrance to MORDOR

Cheers guys! Yeah the date is the 7th, I'm pretty sure there weren't too sane many hillwalkers about today in these conditions

I'm still tinkering about with the HDR, it brings a neat twist to some really interesting scenes. No tripod for this Stuart, just a steady hand and a sharpen command in photoshop. If I had more time I'd watch some more video tutorials on the HDR process to learn how to add layers which can sometimes fix the sky in certain images. But for now these are just basic HDRs.

The Cobbler looks like it belongs on some Sci-fi space film.

Love that pic you took with my 2 dogs on the scramble stretch,Mrs GLW was amazed how they got there,and now keeps asking for just one more look. we all had a great day out and the look on Sue"s face on the scramble gives a fair indication of how much we all enjoyed our day,looking forward to meeting you again soon

Great photos, especially the first one

Not often I see one of those colour skies...

Smashing report and pictures, looks LoTR's-ish (the views that is). The picture of you all at the summit is especially good