I intended doing at least a couple of these hills a few weeks back but was thwarted by low cloud. The MWIS forecast was good for sunday so I set my sights on them once again.

My Granda lives in Tarland so I headed ower the Lecht to spend the night with him, and thereby get myself a bit closer. We had a fine supper and a couple of pints by the fire at the Aberdeen Arms. The great thing about hitting the pub with a 94 year old is that you can still be wrapped up in bed by 9.30pm!

I awoke, all eager, at 0520. The next thing I knew I was scampering along the banks of Loch Muick, hand-in-hand with Kate Beckinsale and my old English teacher, Miss Luckas. At this point I realised I'd fallen asleep again (Kate was doing something else this weekend).

The NEXT thing I knew it was 0730! After porridge, changing sheets etc and other grandsonly type things I was hitting the road, later than I'd hoped. But, you can see Lochnagar from Granda's window, and the sky above was clear and pinky so I was hopeful of a good day. 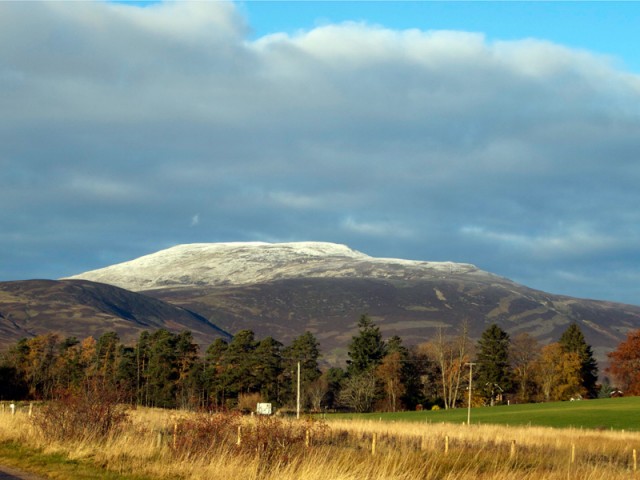 Passing Morven with its white top, from Tarland 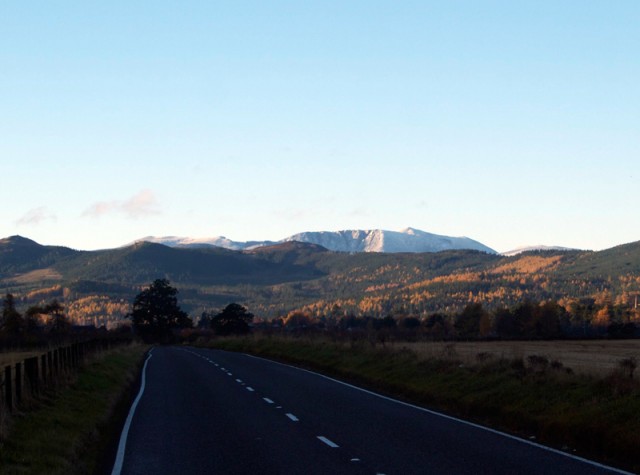 Lochnagar as I approached Ballater from Cambus O'May

I arrived at the Glen Muick car park at 0935 and was the fifteenth car to park. After buying my Pay and Display, kitting up, harnessing mountain dog and availing myself of the Glen Muick Public Conveniences I was on the track just before 10am.

I was still nursing a bit of a gammy knee after the Walk Highlands meet last weekend so I only really intended doing two hills today. As I'd done Lochnagar last year I decided to head along the south side of the loch. As all the other car owners were heading for Lochnagar I pretty much had the track to myself. Almost immediately I came across large groups of stags lazing around together on the hill to my left. Sadly, as it was still in shade and I don't have a zoom lens (yet!) my pix aren't great. 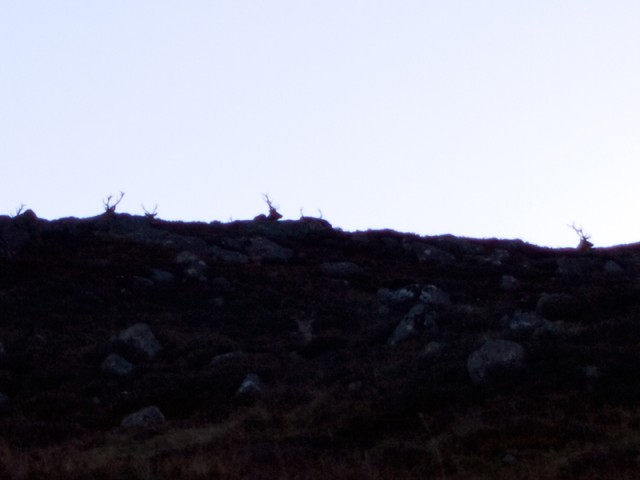 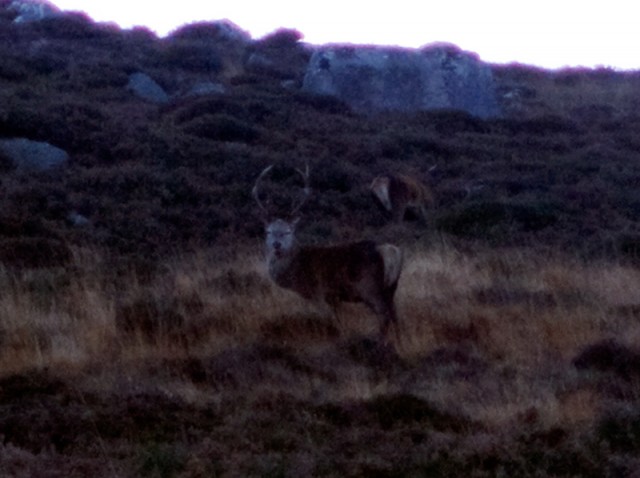 The skies were clear and, as I was still shaded from the sun, there was a definite chill so I started with a quickish pace to warm myself up. The colour of the sky and its reflection on the loch was stunning so I stopped and snapped quite a few times along the track. 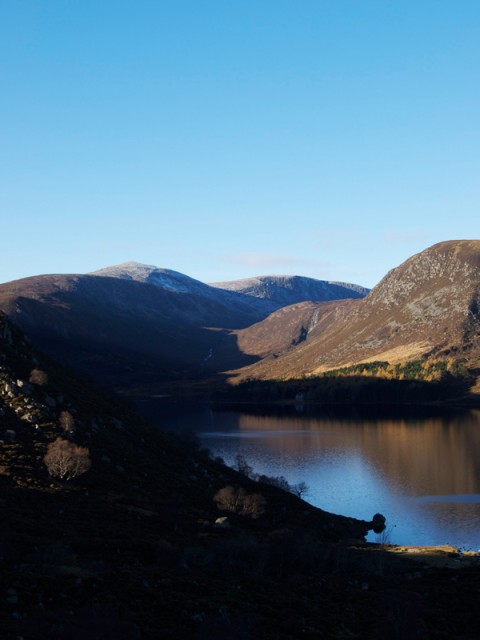 Before long we came across the zigzag path that breaks away from the Loch circuit. 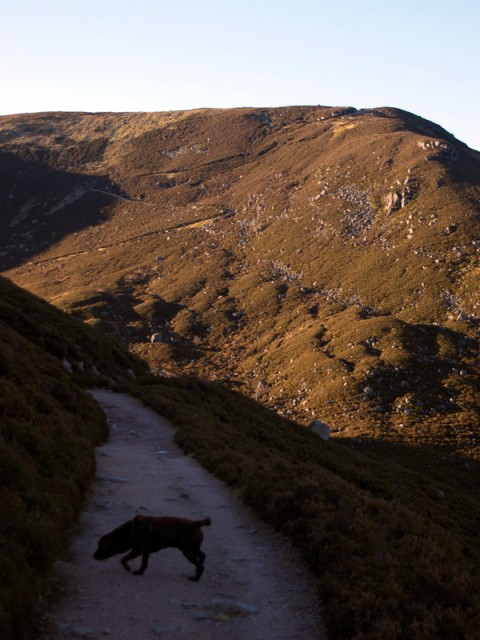 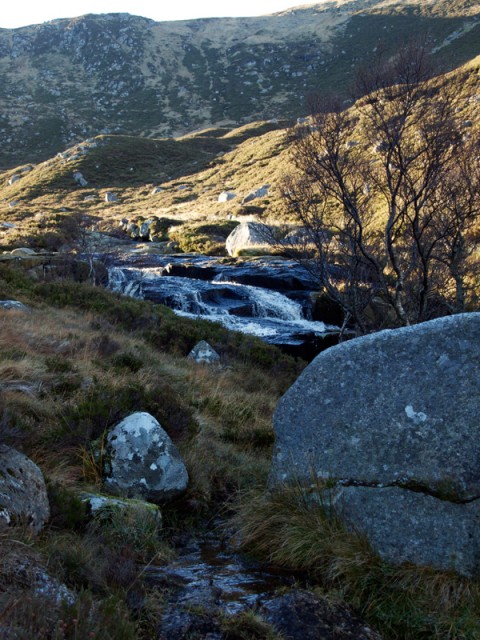 Falls before the zigzag path

As we started the climb the sun (and the steepness!) warmed me up considerably so I stopped and removed a layer. 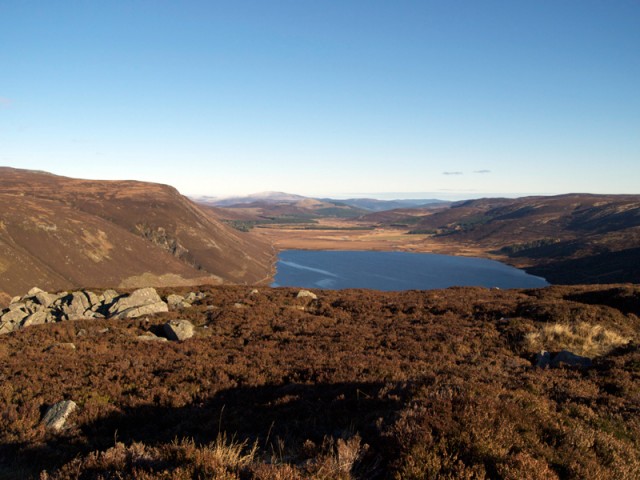 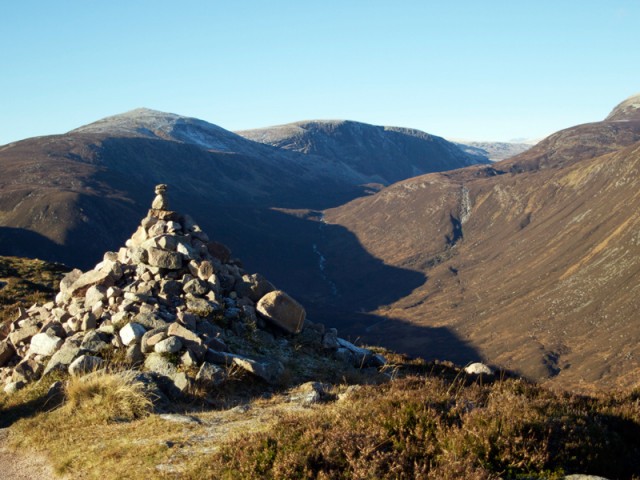 Gaining some height. Cairn with Broad Cairn behind 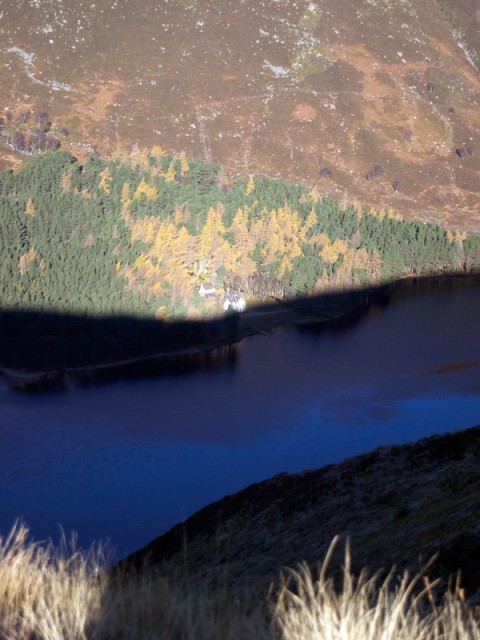 The sun beginning to hit the Queen Mum's old lodge 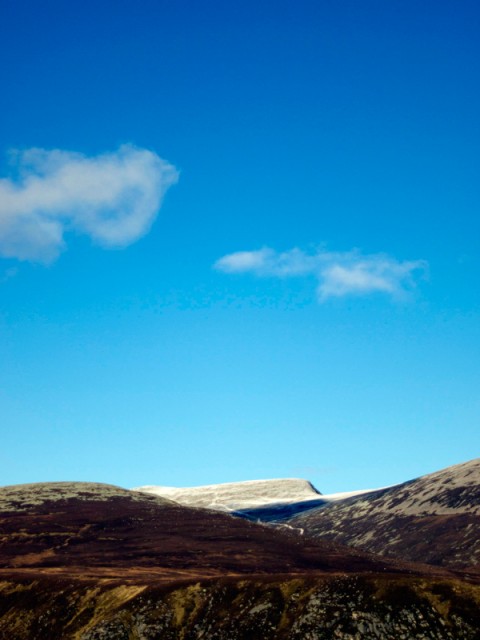 The Glas Allt track leading down from Lochnagar 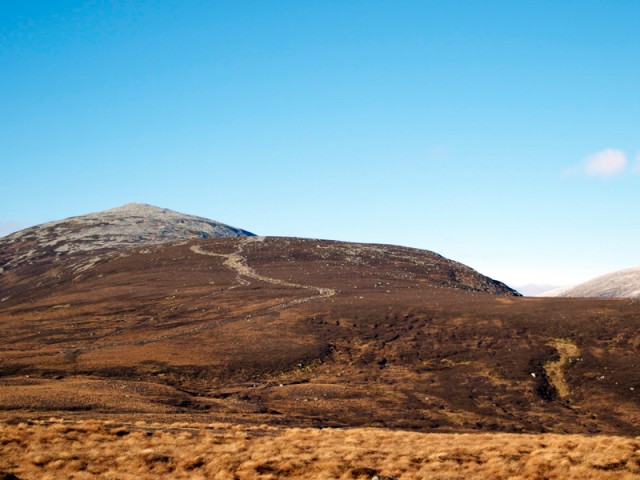 The path up Broad Cairn

As I was passing the Grouse butts the wind picked up and turned decidedly chilly once more. I stopped at the stalkers' stables (and Sandy's Seat) to don a layer again, have a cup of tea and elevenses (1130ish). 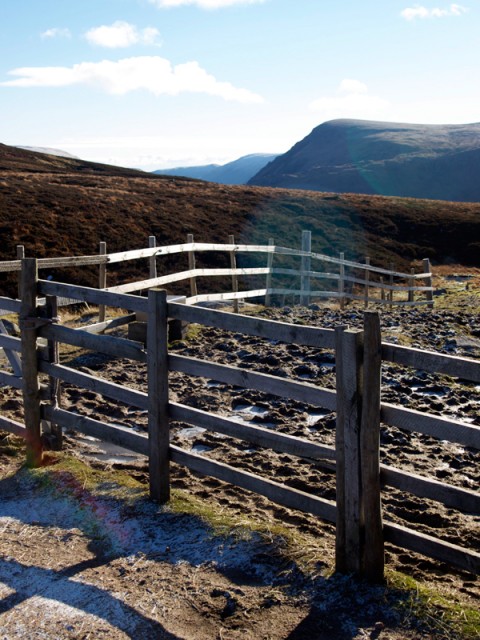 Stable and head of Glen Clova

The climb up Broad Cairn wasn't too much of a hardship but the light scuffy of snow made the boulder field quite slippy in places. Near the top I had a quick chat with a cyclist who had abandoned his bike part way up, had climbed to the top and was descending again. We reached the top at about 1220ish I think. Lovely and sunny but very cold in the wind. A suppy more tea from the flask and we headed off again. 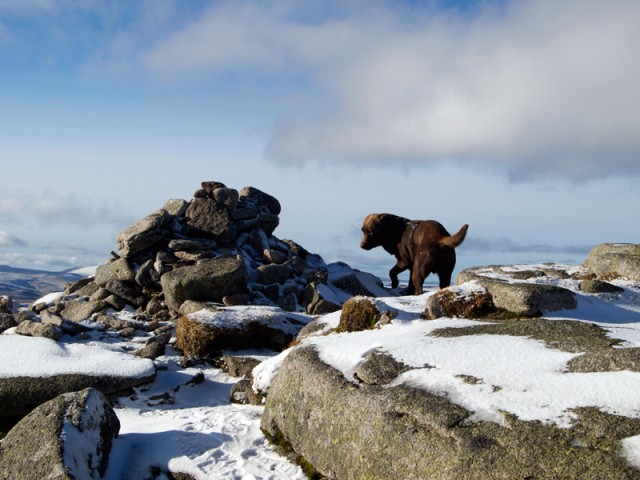 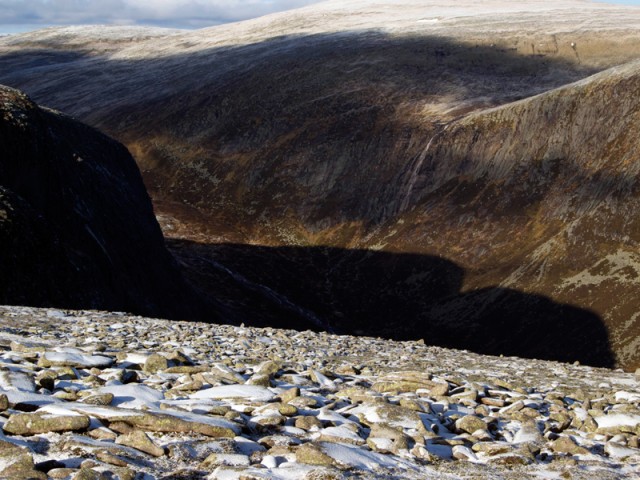 Eagles Rock and the waterfalls 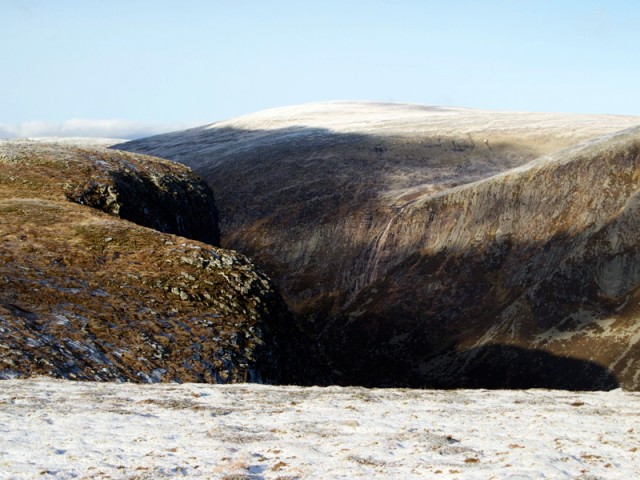 Cairn Bannoch was a very easy wee trot over pretty even ground. Because of dodgy knee, my plan now was to drop down to the far side of the Dubh Loch and head back down again and return to the car park via one route or t'other round Loch Muick. However, it was still such a great day, my knee felt fine and Carn an Silly Name was almost within touching distance. I'd taken just over 3 hours to get this far and calculated that, if I was almost half way round the full circuit, I could still get back before 1630 and darkness. So I picked up the pace a wee bit and headed on. 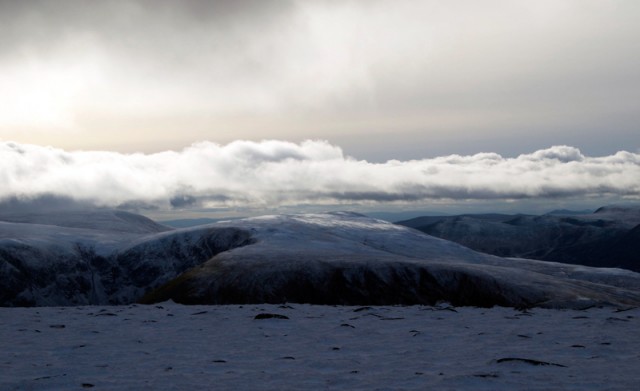 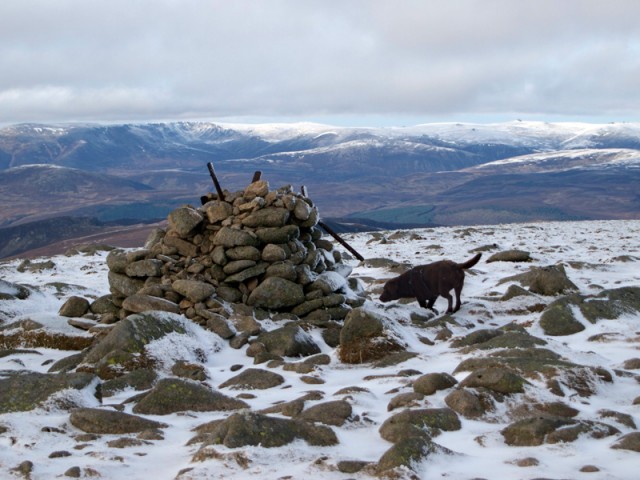 Cairn on Carn an t-Sagairt Mor. Ben Avon and the Cairngorms behind

Keen to get going I didn't retrace my steps but dropped down off the hill and came across the plane wreckage. 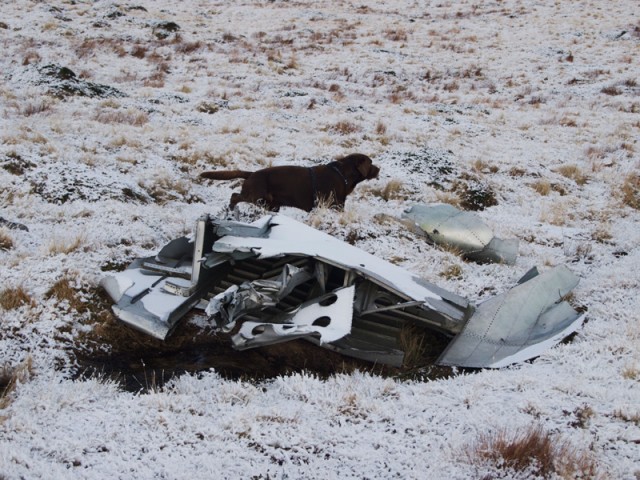 By now the wind was picking up and the clouds were dropping so I pressed on along the track. A sharp right turn at the col took me to the cairn on White Mounth. Uneventful and cloudy. I descended and had a quick chat with a guy who was coming off Lochnagar on his way down to be collected from the road into Braemar. He told me that winds were treacherous on Lochnagar and vis was very poor. I decided to miss out the summit as I'd done it previously and head for the path towards the ladder. The wind was gusting and vey cold so I was pleased to reach the ladder, don another couple of layers and a snood, finish my hot tea and enjoy a second lunch. The descent was treacherous because of the thin layer of snow on the steps but we made it down without problem and headed for the Land Rover track. 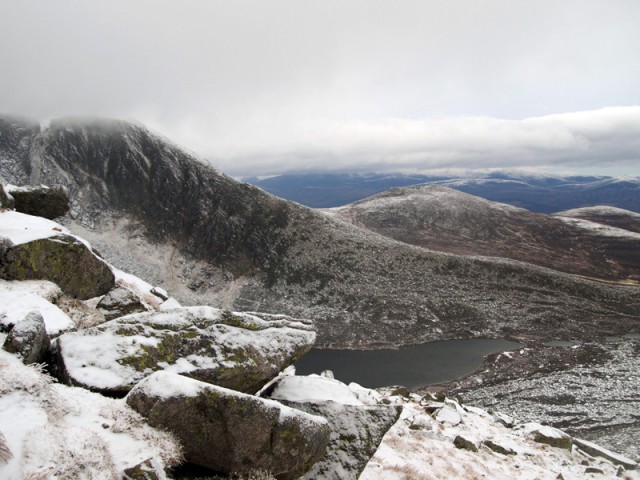 Lochnagar from the ladder 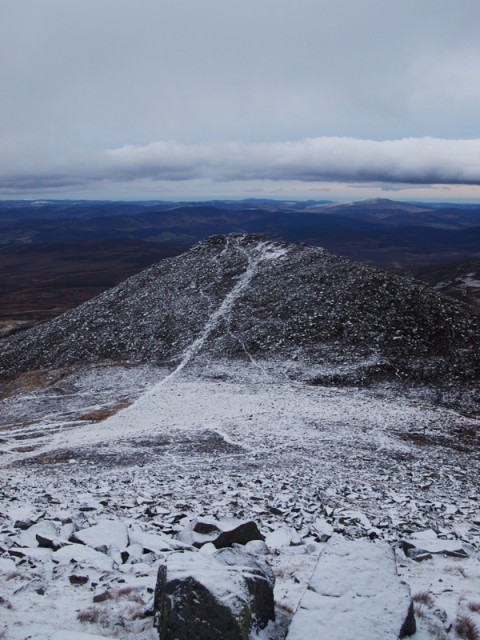 Now out of the wind I picked up the pace again and passed a few other walkers, and made good time. The light was fading as I passed the east end of Loch Muick. After once again making use of the Glen Muick cludgy (only £1.50 per use now!) I was back in the car at 1645 on the nose, just as it turned dark. Then I was only an hour's drive back over the Lecht and home.

As Lochnagar and Loch Muick have been stomping grounds for me since I was a wee loon it was a thrill to be able to do these hills on such a fine day. It would've been nice to have started a bit earlier and get to Lochnagar too before the clouds came down, but you can't have everything. (See Kate Beckinsale comment above!)

NIce report Weemistermac,
We done these in April and there was loads of snow about. One of the first bigger rounds I done this year. The wind was freezing after lunch in Glen Etive so it must have been just as cold up there

Nice to see the freindly deer are still around. Its the only place I could get near enough to get a photo

Nice trip - big one too for the time of year.

Pretty sure we could see the snow on Lochnagar from Corrour on Sunday.

You're weather held for longer there too.

Is your dog called Cairn, or are you talking about the actual cairns in the photos?

Is your dog called Cairn, or are you talking about the actual cairns in the photos?

lovely pictures, that track looks quite good, was it good all the way?

your time looks good too, it'd take me 10 hours to do that as I walk at slug's pace and take too many photos

I read your report of this round, Monty and I have to say I preferred the conditions yesterday!

Thanks Kinley. I love the hills when you get that first powdering.

(Although Cairn's a good pseudonym for him. He tends to rush ahead when he spies one!) I was indeed referring to the cairns on the hills.

And thanks Merry Walker. I've been lucky with my choice of days, weather and hills. With the right combination of those factors the pictures pretty much take themselves!

Cairn is actually a really good name. For my next cat, i'm thinking Suillven.

Good report with some braw pics. Brings back some memories so it does

. When we did the reverse route to you last April / May we started with the Corbett Conachrraig, then had a high camp prior to the summit above Lochnagar.

Sure took us much longer than 6.5 hrs, thats good going with a dodgy knee.

PS thats a lot of baselayers you had to put on, must have been mighty cald.

FloozySuzie wrote:Cairn is actually a really good name. For my next cat, i'm thinking Suillven.

Beat you to it I'm afraid

Thanks Dave. I often do a walk and wonder about doing some more wild camps, but at the end of yesterday's walk I was glad to be at home by the fire!

To be fair, the report should've read 6hrs 50mins and not 6.5 hours! I do tend to move pretty quickly but the cold and threat of darkness probably shifted me on a bit.

I normally walk with just a t-shirt and windstopper sof shell jacket but it was cauld when I started so I had a microfleece on too. I took it off as the sun hit me then put it back on again. On top of Cairn Bannoch I put on another base layer then a waterproof as I descended the ladder. 5 layers in all which is the most I've ever worn I think! It was flippin cold on the way down. Great day out though.

Alastair S wrote:Beat you to it I'm afraid

How do you pronounce Caol Ila?

Great report with pics to match....and glad to see Barnie leading the way

Looked like a long day. Must try and get up that way next spring