The Aonach Eagach, and its two Munros, have been a bit of a Problem for me for some time now

- basically, the issue has been that by the time I'd gained the confidence to maybe have a wee look at the famous Notched Ridge myself, everyone who I go walking with had done it years ago

. However, Donald (one of my fellow Bearsden Choirboys) eventually took pity on me and made an offer a few months ago to drag me along it if we could find a mutually convenient date. He's done the ridge no less than five times before - an impressive tally - so this would make his sixth Aonach Eagach outing

!
I'd taken a couple of Annual Leave days at the end of June on something of a whim, on Monday 25th and Tuesday 26th, and amazingly enough, the weather forecast looked fantastic with wall-to-wall sunshine, so I dropped Donald a text to see if he might be free to attempt the Ridge. The Monday didn't suit him, but the Tuesday did... which unfortunately meant that I'd be tackling this outing after a fairly big walk the day before (Sgor na h-Ulaidh & Beinn Fhionnlaidh from Glen Etive), but I wasn't going to knock back an opportunity like this, particularly since it might be another ten years before Scotland enjoys a similarly prolonged run of sunshine

! We took the standard route as described in the Walkhighlands route description, parking my car at the small car park 300 metres west of the Allt-na-Ruigh cottage on the north side of the A82, with Donald's car having been left at the other end of the route, in the car park a bit east of Glencoe Village.

our_route.gpx Open full screen  NB: Walkhighlands is not responsible for the accuracy of gpx files in users posts
It is a steep initial ascent up to the start of the ridge, and my thighs were certainly feeling it after my h-Ulaidh outing the day before

. Ah well, at least there was a grand view back across Glencoe for distraction, towards Bidean nam Bian's rather elusive summit with Stob Coire nan Lochain rather more prominent in the foreground. 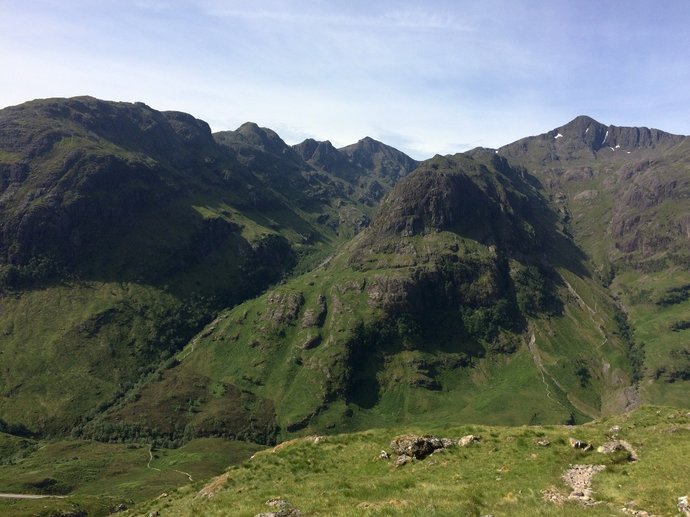 The ascent path, although steep, is rather good fun with a whole series of wee scrambly bits higher up that provide a gentle warm-up for the main event to come, and at least we gained height pretty rapidly. As we eventually gained the ridge, there were more fine views. This was the vista westward along the ridge from the flanks of Am Bodach, towards the Blackwater Reservoir, with Schiehallion predictably photo-bombing the shot as ever, away in the distance. 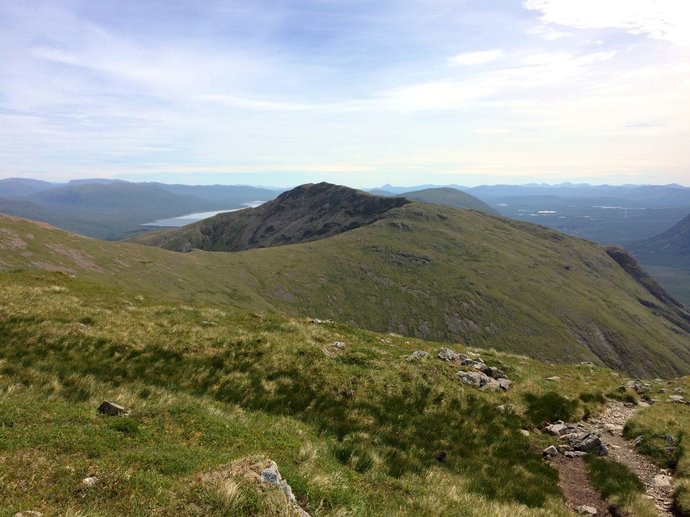 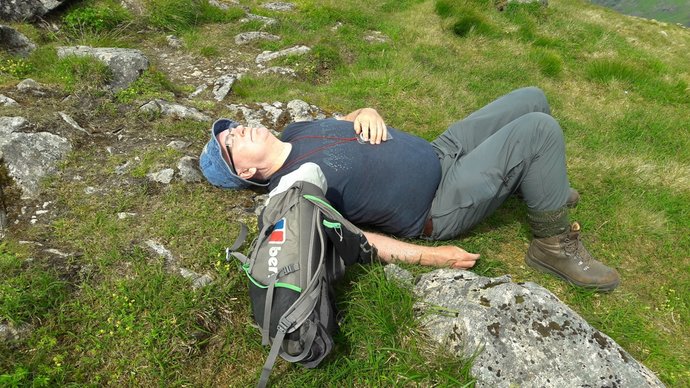 Am Bodach isn't even one of the two Munros - it's just a Top - but it does enjoy some spectacular views. This was Ben Nevis as seen from its cairn, with Stob Ban and Mullach nan Coirean of the Mamores to the left of the shot, and a rather shapely Corbett, Garbh Bheinn (not the famous Ardgour one, although we did get a good view of that later in the day!), prominent in the foreground. 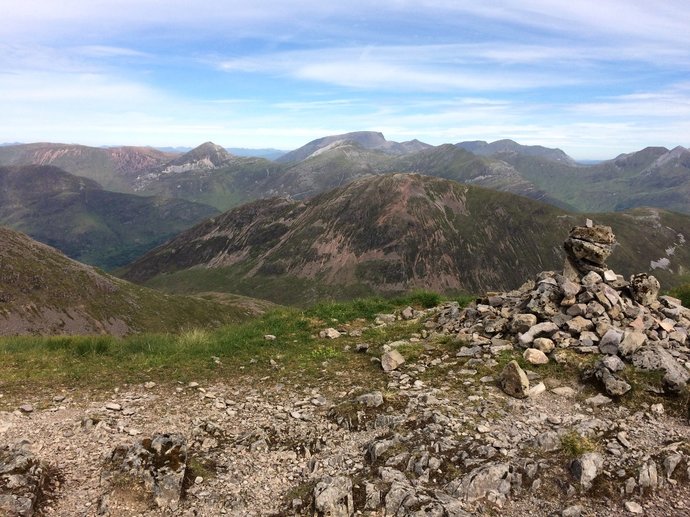 Donald contemplating the ongoing ridge from Am Bodach's summit: 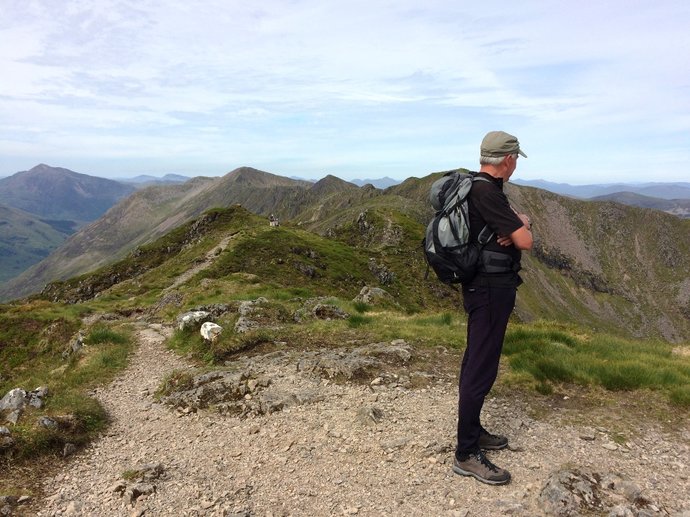 From Am Bodach's summit cairn, it is a gentle stroll westwards for a couple of hundred metres, then the path suddenly plunges into the Abyss, with a tricky wee down-scramble

. I'd heard some scary things about this section, but in reality it wasn't as bad as I'd imagined - the route down is actually fairly obvious, descending a "staircase" of ledges with good holds, and in dry weather it posed us no problems, despite looking a wee bit intimidating at first. This was the approach to the Edge, with a nice view onwards to the first Munro, Meall Dearg, and the second one - Sgorr nam Fiannaidh - visible in the distance:. 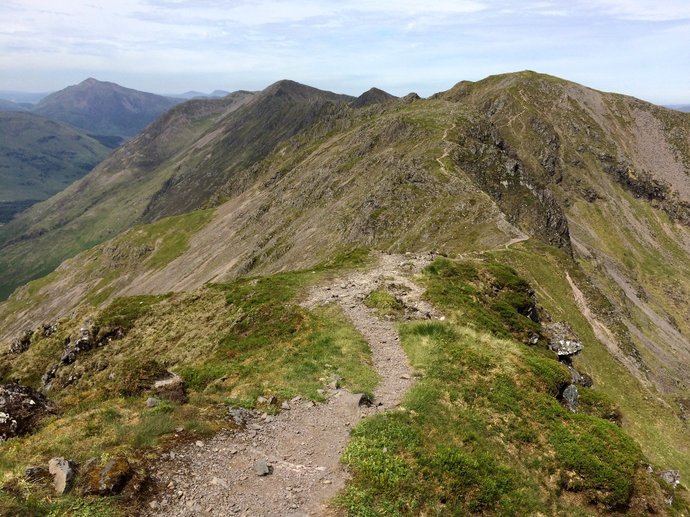 The next section, the ascent to Meall Dearg, was fairly straightforward and again there were some good views westward, with Loch Eilde Mor now visible to the north, and Schiehallion of course still muscling in on the action. 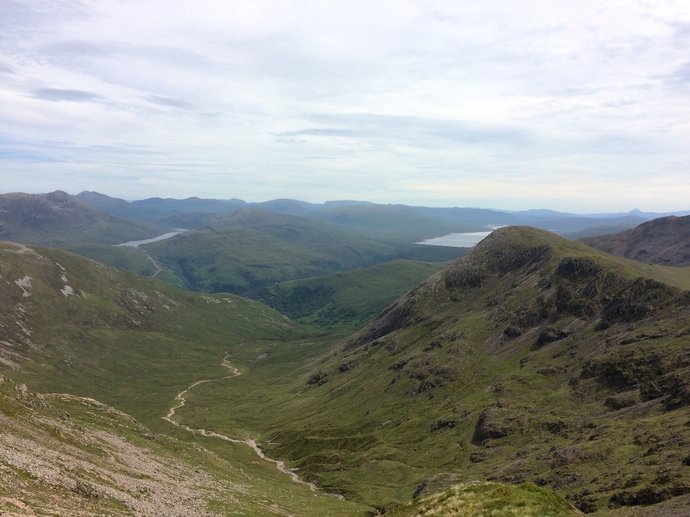 Before too long, we were at Meall Dearg's summit, and I was getting my first proper look at the famous Notched Ridge itself. Spectacular, if a tad scary 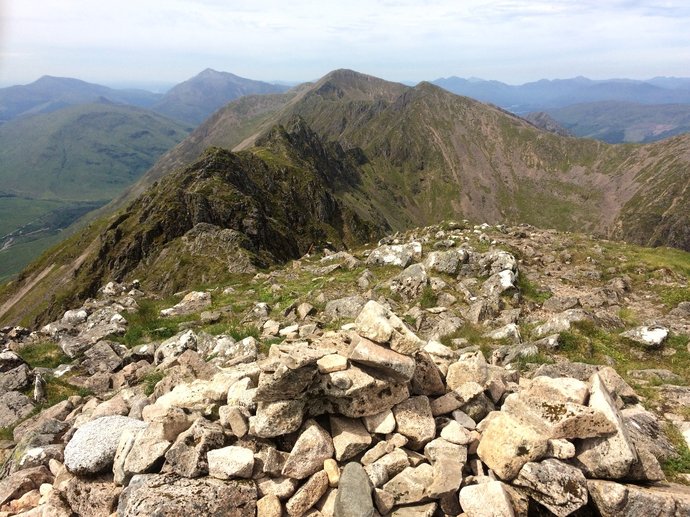 A slightly zoomed shot of the Ridge: 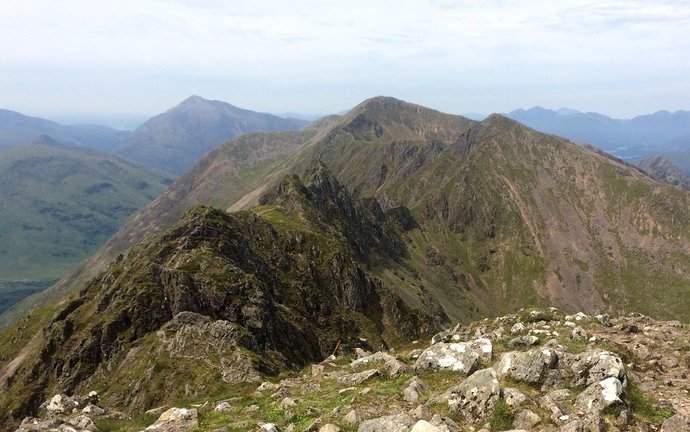 We headed off westwards, well fired up to have a go at it. To my relief (and somewhat to my surprise), the scrambling actually proved to be well within my capabilities, and although there were a couple of exposed sections that gave me pause for thought, on the whole it was much more exhilarating than it was intimidating

. An up-scramble up a big chimney at the start of the Notched Ridge proper proved to be particularly entertaining! 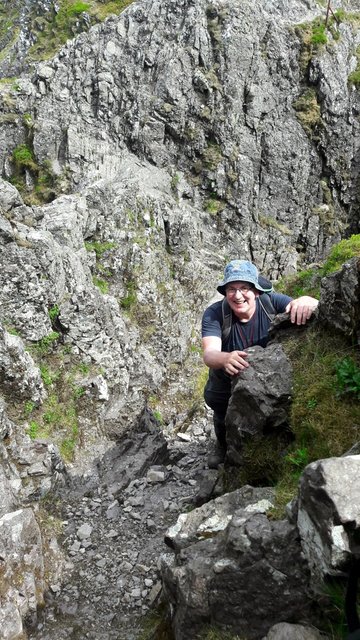 The best bit is towards the end, on the famous Crazy Pinnacles. Just before this, we stopped for a breather, enjoying the view across Glencoe to the Bidein massif, with Ossian's Cave very prominent from this angle. 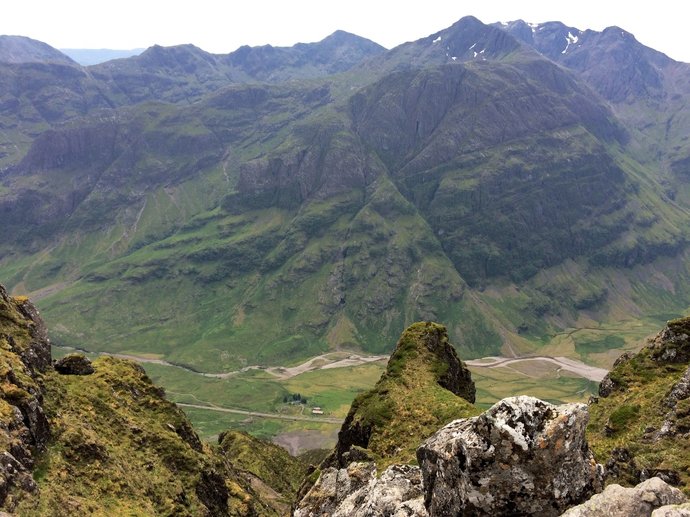 A zoomed shot of Ossian's Cave: 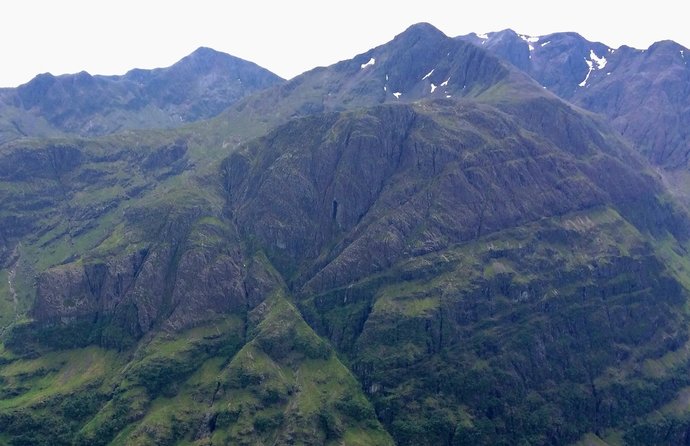 The Pinnacles were, on the whole, a delight, with continuous, varied and very entertaining scrambling. This is a wee look back along the pleasingly rocky south side of the Ridge: 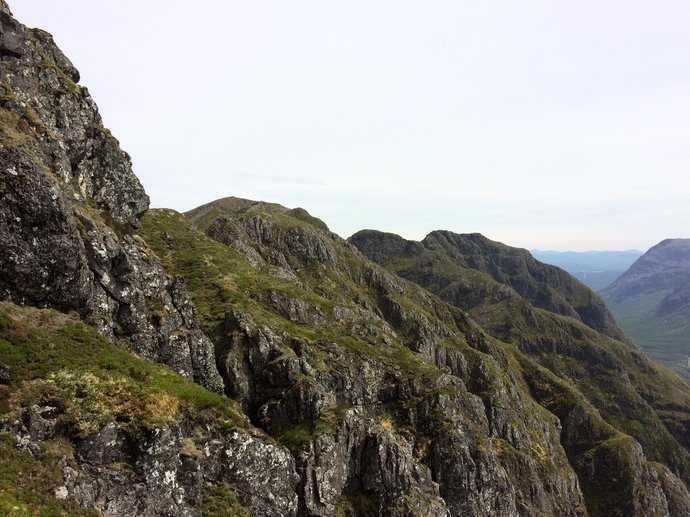 Yours truly enjoying a bit of tightrope-walking practice: proof that even chubby fiftysomething blokes can tackle the odd wee bit of scrambling 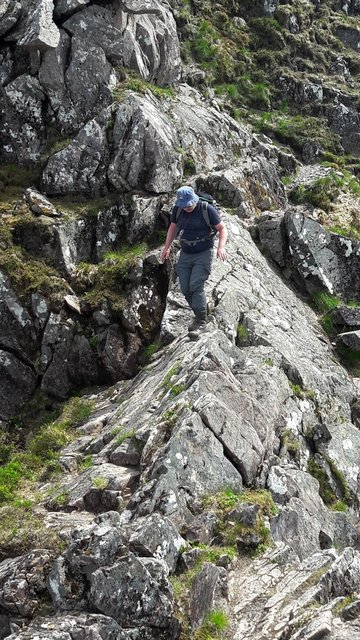 Shortly after this, however, I had a Near-Death Experience! I stopped for a glug of water and a kiwi fruit, and promptly managed to inhale half the kiwi and choke horribly ... Thankfully I eventually managed to dislodge it and get it swallowed properly, narrowly avoiding what could have been the most bizarre cause of death ever recorded on the Aonach Eagach ridge

... While I got my breath back, I enjoyed another fine view westwards, this time along the north side of the ridge: 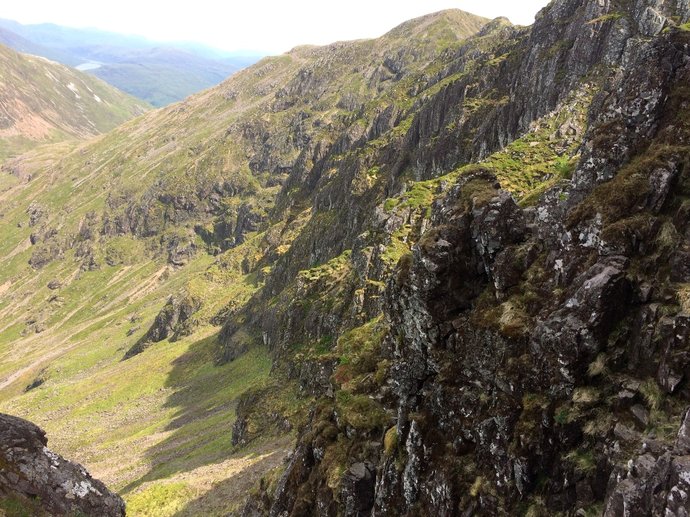 On the whole, we did our best to stick to the crest of the ridge, avoiding a series of small bypass paths that seem to have developed around some of the trickier bits of scrambling. Quite near the end, however, on the second-last Pinnacle or thereabouts, we found ourselves half-accidentally on a bypass path that made quite a big loop down to the north. This wasn't much fun at all, with the path being quite exposed and having a lot of loose stones and earth. In fact, I had a very sobering moment when I dislodged a sizeable stone and had to watch it clatter noisily down the slopes into the depths to the north ... "Fool of a Took", as Gandalf might say! Thankfully, Donald was well ahead of me by now, having turned the corner and gotten halfway back up the other side of the loop, but if he'd been directly below me, it could have been quite nasty

. On the whole, I think it is actually safest to stick pretty rigidly to the crest of the ridge, where there is no loose rock and things don't move about. If you do want to use any of the bypass paths, then I'd strongly advise staying well spaced out and taking great care not to dislodge any of the loose stones (i.e. don't be a diddy like me

!).
Sadly, the fun of the Pinnacles couldn't last forever, and eventually we found ourselves at the low point west of Stob Coire Leith, where we stopped for lunch before the easy re-ascent to the Top (Stob Coire Leith) and onwards to the second Munro. This was the view back west along the Notched Ridge from the flanks of Stob Coire Leith: 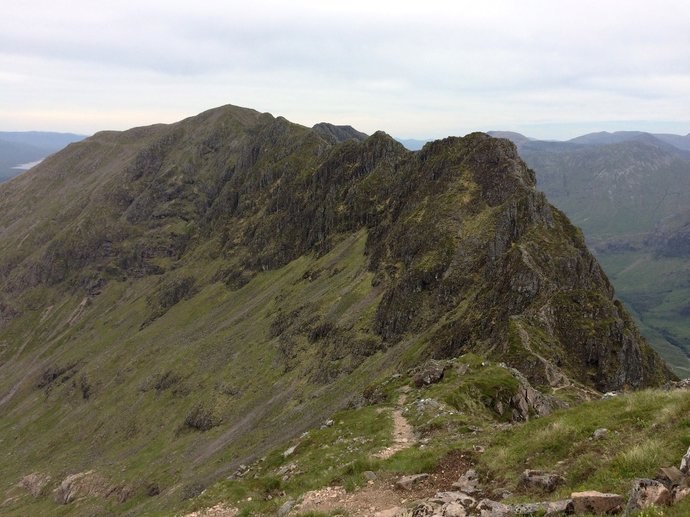 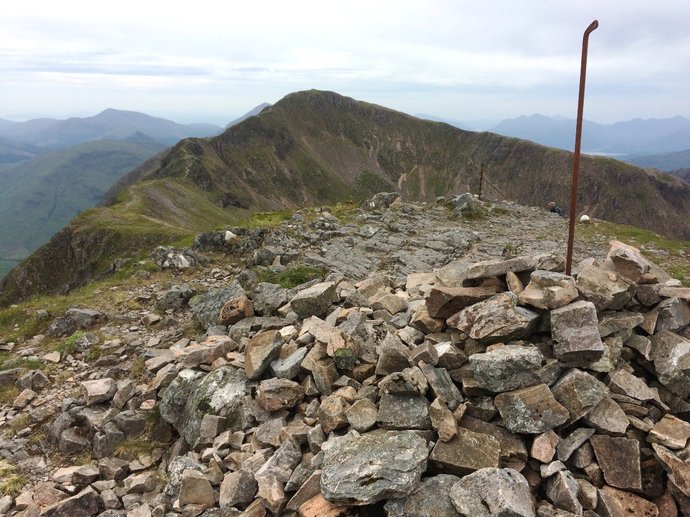 Another look back west along the Ridge, this time from the flanks of Sgorr nam Fiannaidh: 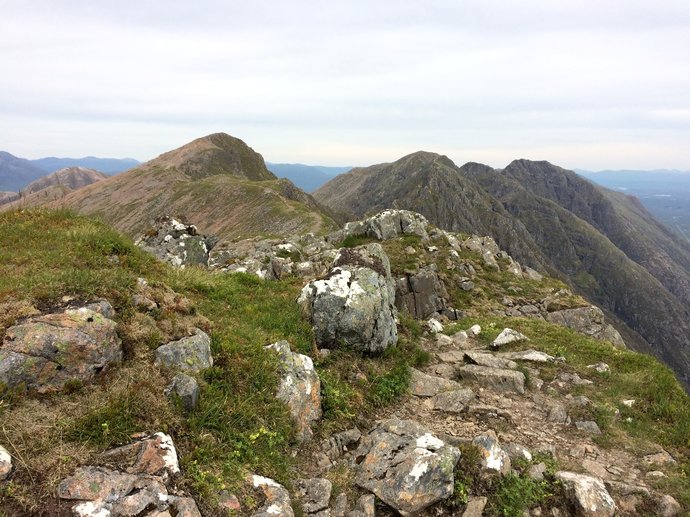 Me on Sgorr nam Fiannaidh's delapidated trig point at last, not quite able to believe that I'd done it 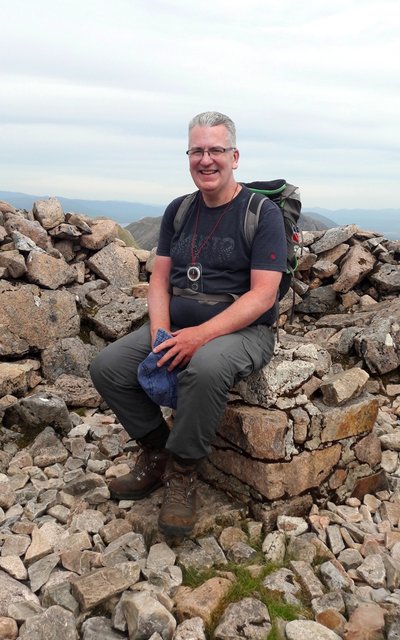 We were both pretty knackered by now, however - it had been a very hot day, and to be honest I hadn't brought enough water with me; my thighs had also really run out of power by now after my outing yesterday, and I was going to have "jelly legs" for the descent

! Ah well, at least the scenery was still spectacular. This was the view down into Glencoe, towards Loch Achtriochtan away down below, with Ossian's Cave prominent again on the other side of the glen: 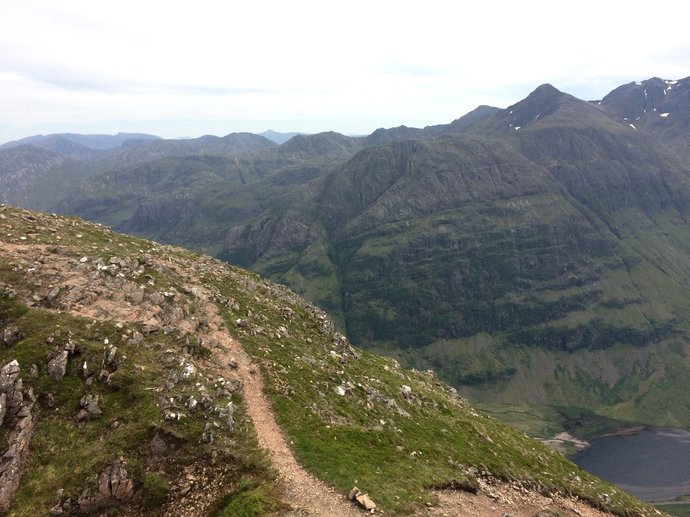 Donald in profile, with Ballachulish Bridge looking impressive behind him, and the Pap of Glencoe visible over his shoulder: 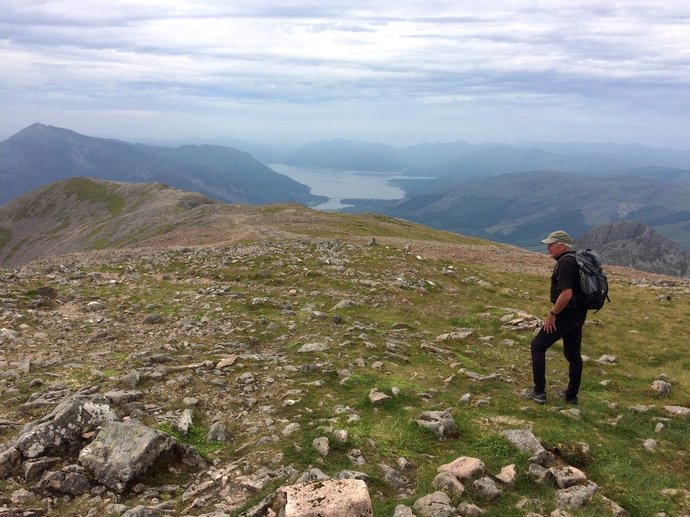 Unfortunately, the descent to the bealach with the Pap of Glencoe, and the onward descent route back towards Glencoe Village, proved to be pretty penitential, on a loose stony path in baking heat, and with no running water until we were really low down. I suppose this was the necessary pay-off for having enjoyed such a superlative day on the Ridge itself

! Loch Leven and the Ballachulish Bridge were still looking spectacular, but all those loose chuckies in the foreground were decidedly less spectacular 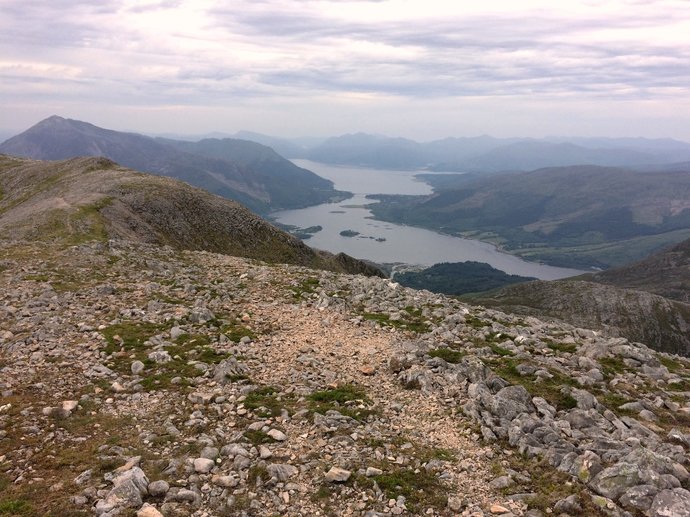 Donald well ahead of me on descent, as usual

- the path steadfastly refusing to improve one iota! 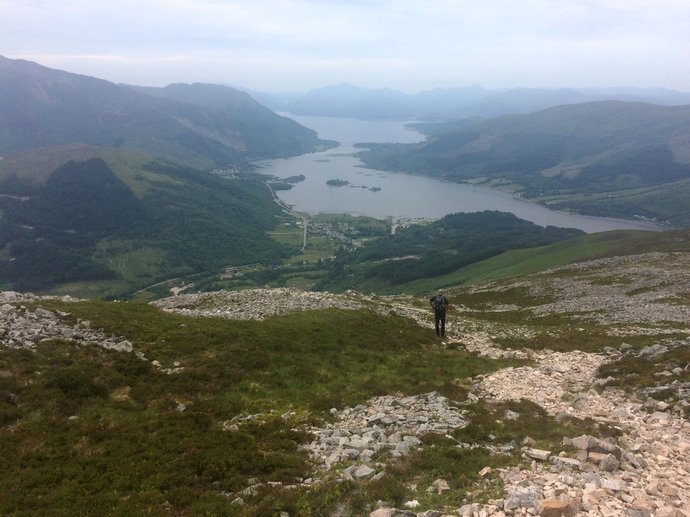 Eventually, however, we were nearly down, and we finally found a wee stream where we could top up our water. At this point, there was an intriguing view westwards along Loch Leven to the other Corbett called Garbh Bheinn, the famously craggy one on the other side of the Corran Ferry. It was looking extremely impressive from this angle! 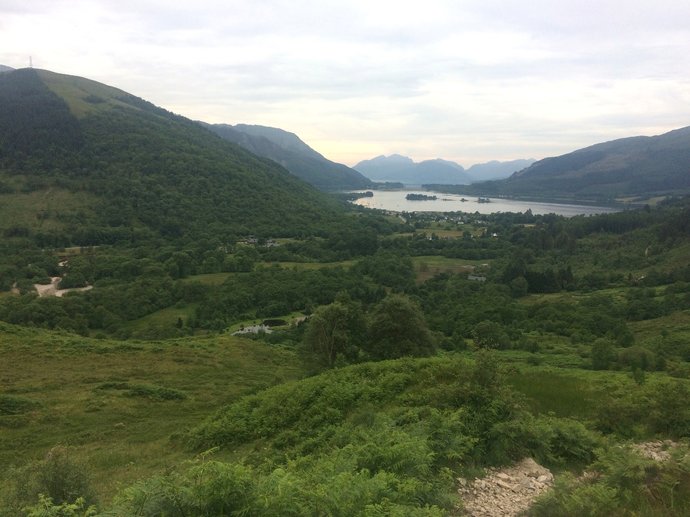 Without a shadow of a doubt, and despite all the knackeredness, the thirstiness and the jelly legs, this is by far the best hillwalk I've ever done

Thanks - definitely a memorable outing

Great report and lucky you with the weather. The photos really show the detail of the ridge. I tried for AE last year but my jelly legs came at that first look down into the abyss, also from climbing Liathach the day before. Hope to give it a crack next year.

This was a wonderful, entertaining report with superb photographs. Furthermore, it appeals to men of a certain age (or older!). Two such men are attempting the Aonach Eagach for a second time (after several décades) tomorrow and will be taking this report for guidance and inspiration. For one of the such men (not me, the other one) tomorrow will be his last Munro second time round. Wish us luck.
Minor negative about the report was that "east" and "west" seem to have got a bit mixed up when describing the views. We'll be going westwards tomorrow, all the time!