With the forecast looking sunny and with very little wind it was a good opportunity to take in Ben Lawyers and Beinn Ghlas. With the clocks changing, it was an early start to make sure we had enough time to take in these two and a optimistic possibility of carrying on and Doing An Stuc. 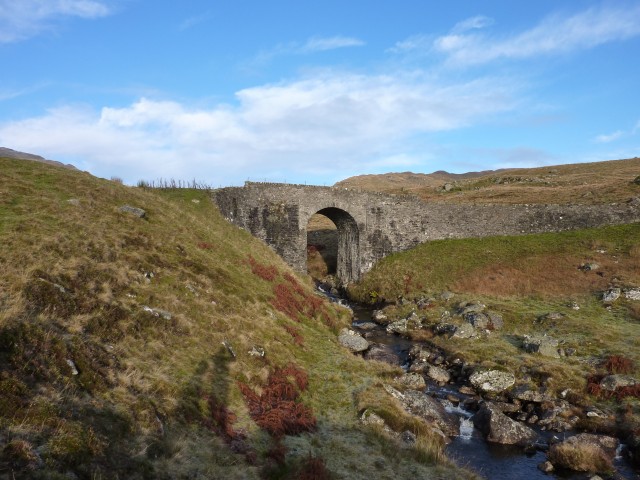 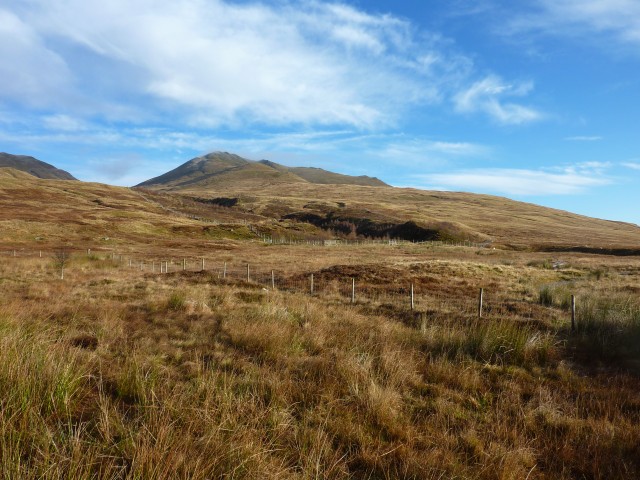 Beinn Ghlas from the car park

The way up to the car park brings into view Bein Ghlas and with us being only the fourth car to park up raised my hopes of a relatively people free walk. That hope was quickly dashed when within the next ten minutes car after car arrived and also a couple of mini buses from Edinburgh University parked up and unloaded their eager passengers. I couldn’t blame them as conditions were great for climbing and I’m sure everyone was keen to get out on their walk.

So we set off through the gate and as instructed kept to the left path which would wind its way up Beinn Glas. We could see all the groups in front of us and after going through the second gate we began to catch up with the walkers in front. There was a great combination of experience and first timers (as in first Monro) whom we met along the way and would update each other on the path up as people took breathers. So it was a socially pleasant time and also meeting Louie the cocker spaniel who was having a ball. As we climbed, the cloud lying on top of Loch Tay became clear. Also the higher we went Ice and frost was starting to appear. It was the first sign this year that we were going to have to be a bit careful where to put our feet especially as we got nearer to Beinn Ghlas. 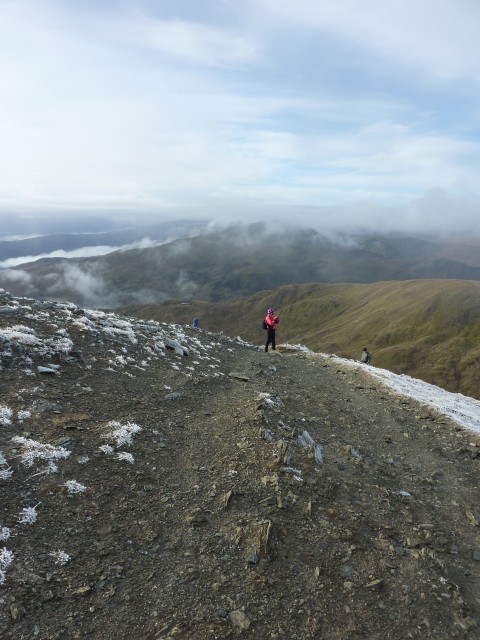 brrrr...its starting to get a bit cold and frost is forming

However after a wee bit of scrambling we made it to the cairn and managed to get the photos before the next walkers appeared. Su at the top of Bein Ghlas

After only a short stop we headed on to the bealach and an easy stroll down before starting to climb up to Ben Lawyers. The weather however had started to change and before we knew it we were in the mist. I managed to get a photograph before it disappeared into the low cloud. 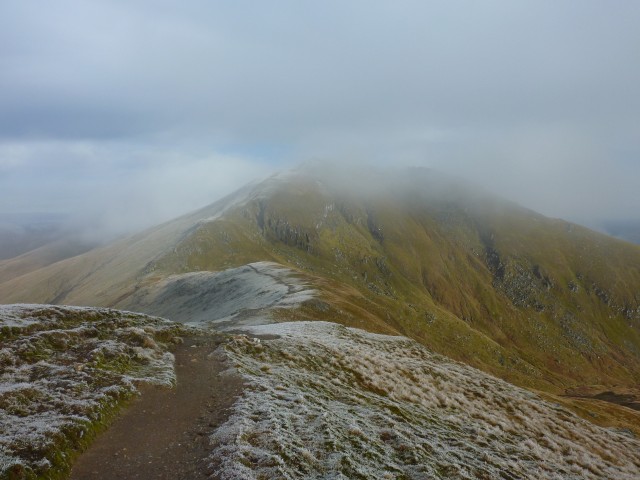 Ben Lawers before disappearing into the low cloud

On the way up there was a wall of stone that was frozen and looking rather splendid with the ice particles glistening. Su in front of the frozen wall of stone

We continued on and steadily made our way up to the top; only having a bit of a scramble to go round some ice that had formed on the ‘path’. We reached the top and found ourselves with the decision to make about going on to An Stuc. 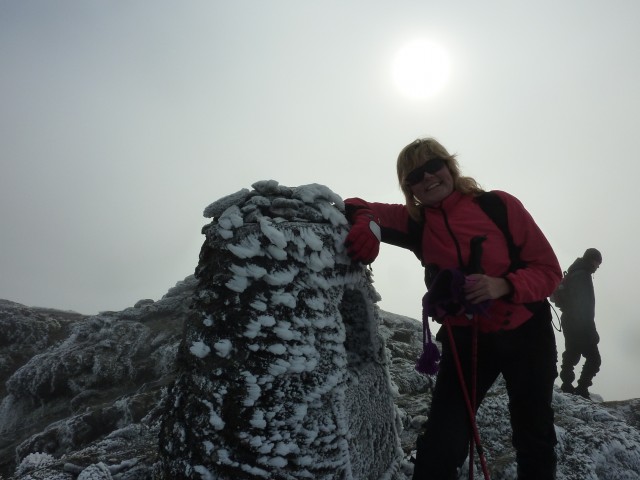 Su at the trig point on Ben Lawers

I decided to go further along the path and see if the mist would clear once we started to go down towards An Stuc. However, it wasn’t shifting and made the decision that we would leave it for another day. So we headed back to Ben Lawyers to find the whole of Edinburgh University on the top (slight exaggeration!). 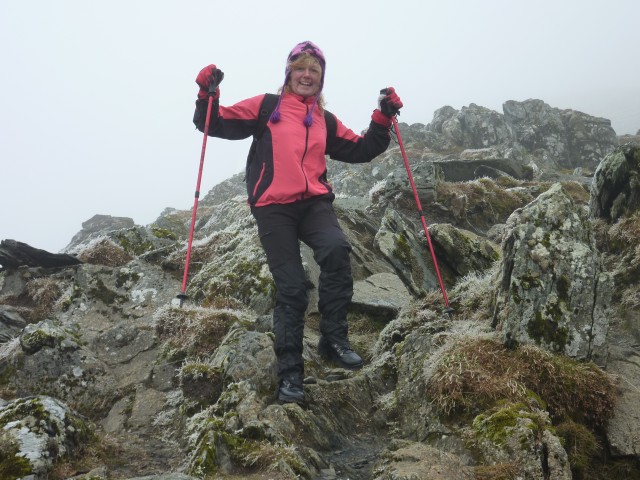 Su showing her expertise in dancing on ice !

Also we came across this large piece of the mountain that was frozen .... We headed slowly back down the Bealach, and decided to take the path alongside the side of Bein Ghlas and heading for Meall nan Tarmachan. This was a pleasant walk and when the mist cleared as we descended we had a clear view across to Glen Lyon. 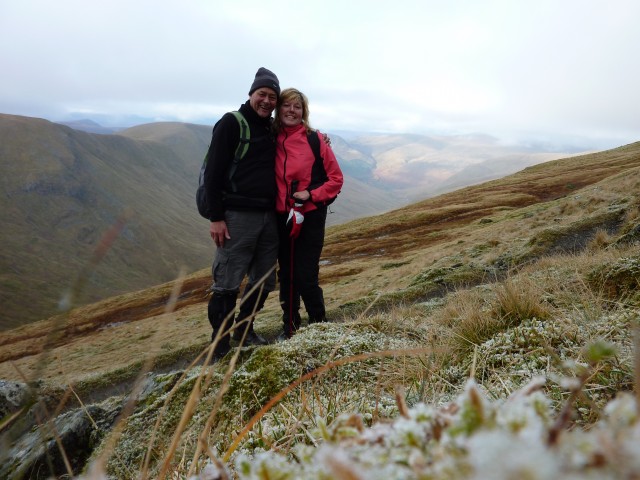 Mr and Mrs Jockstar with Glen Lyon in the background

After having a quick look at the way up to Meall nan Tarmachan. We made a mental note of coming back another day to do a quick ascent.

So in conclusion it was a great days walking at a fairly easy pace and with the weather
being so good it gave us the satisfaction of knowing we had enjoyed a lovely November
day in Perthshire.

Nice photo of the mist over Loch Tay. Tend to agree about the being careful bit - the hafway house of some ice/frost can actually be harder than full snow or no snow. First time I was up these two was in snow but by the time we got to the top of Ben Lawers it was fully shrouded in cloud. I'd aslo agree on your decision not to go ahead with An Stuc - having done it in good conditions I'm not sure I'd like to try it in icy/slippery conditions

Totally agree with you and thats why we turned back. I am lucky that I have climbed An Stuc in the summer but i know that its a no - no in the winter but from the Lawyers side it could have been o.k.. However, sense prevailed and also would have run out of daylight, so we will revisit in the summer.

An Stuc's fine from the Lawers side but it's a long, long walk back up Lawers again afterwards! I'm always really pleased to have lots of other people on the mountain when I'm up there - makes me feel more confident and less creepily alone! Probably 'cos I'm always in the clag - it does get a bit eerie spending all day in a mist sometimes...

Great photos and report of a great day Jockstar

The right decision was made by you to turn back, your judgement call was spot on.
There is always another day to visit An Stuc, as you say maybe a summer walk!

Really enjoying our walks and getting a lot of confidence and knowledge from your experience, hopefully this weekends walks will be a bit more peaceful without minibus loads of people

Good report there Jockstar. The weather looked excellent for the first half giving you great photo opportunities. Isn't it just getting damn cold now

Would I be correct in saying mrs Jockstar wrote this report and forgot the brocken spectre photo. Thats cheating

If you have one then post it because they are special.

Hi monty, nope the report was all the work of Jockstar

I have still to write my report on these walks (I’ m a bit slower than Jockstar as he is more used to it that me!). I will post my report tonight

On one of the photos I took it shows a very feint Brocken Spectre between Beinn Ghlas and Ben Lawers, but it’s there never the less!

, by the time the camera came out of bag it was feint, I think I was just in awe of actually seeing one

, that the camera went out of my mind

I think it's too late to make any difference .....

I can see a joint family completion is say 5 years time.

Thats rushing it a bit !!

Just a bit!!!! Steady guys think I may have some in put on this