After breakfast, I drove round from Scotlandwell to the start of the rough road to Loch Glow on the minor road south from Cleish. I parked in the lay-by at the start of the road because I assumed, correctly, that the car park at Loch Glow itself would be for anglers only. Anyway, the stroll to the loch was pleasant enough and quick. I had decided to walk along the north shore of the loch so I crossed the bridge over the outflow and came to a style over a fence with a sign for Dumglow. The walk along the north shore of Loch Glow

Over this, I followed a good track round to the start of the forest on the north shore. here, I had to drop down, over a barbed wire fence (no style - the first of several!) to the shore where I followed another good path round to the west end of the loch. This time, there was a style and I followed the line of the old wall, again on a fairly good path, to Black Loch. The slopes of Dumglow from Black Loch

Here, things became a bit more awkward because the route to the hill went through reed beds which was a no-go so it was over yet more barbed fences and circumventing a boggy section to reach the start of the steep climb up the grassy slopes to the top of the hill. I must admit that it was a bit of a struggle in the heat and I was glad that it was a short, sharp ascent. All that remained was a gentle stroll over to the summit trig and cairn to enjoy the views of yesterday's hills and a very nice view of the Ochils. 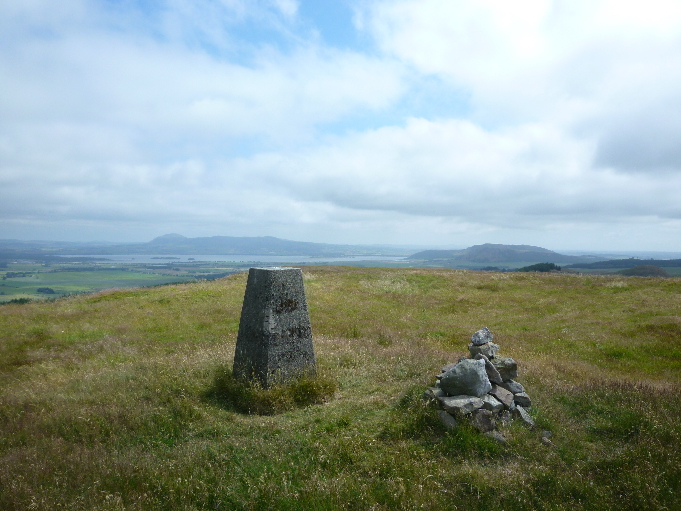 The summit of Dumglow looking over to Benarty and Bishop Hills

I returned to the car by the same route.