This was my easiest walk of the week (little did I know what was to come). Decided to take my younger dog (Marley) as I knew she would love the walk and it was a particularly dangerous one.

Set off about 9.00am from the Herrons Field car park with the weather pretty nice although a fair breeze was picking up. Got beyond the old Bynack stables spot and followed the path up to the open 'moorland'. Things were now getting a bit tasty with winds probably at a steady 60mph. Met a guy on the way down who said the top was bit scary due to the winds. He had almost been blown over a few times. Had a chat a decided to press on. Marley still looked up for it. Now well out onto the open ground and hail had replaced the blue sky and was whizzing by like shotgun pellets!! Marley had a look of What the F!!!! Little did she know I was determined to press on after missing out on 4 hills on the Sunday.

We had now got to the flat spot just before the final climb up the slope. No shelter except one solitary stone abot 50 yards off the track. Fought over to it in the now stenghtening winds !!!. Ducked down with Marley and carefully unwrapped some food in relative calm. Gave Marley some biscuits to keep her on my side.

Started the final push and thankfully the track went up the left of the hill, offering some shelter from the strengthening winds (holy cow). Got to the last section about 50 feet from the summit where there was a funnel of wind coming through a gap, I'm guessing 80mph+. Hooked Marley onto her lead for safety and told her we were running for it. The crucial thing was to pick the right time. Probably best between the canoes whipped off Loch Morlich and the Reindeers from the centre at Glenmore.

Charge!!!!! I'm sure we floated half the way but we made it to the calm side of the cairn. I touched the top from relative safety. If I had stood up, me and Marley were having dinner in Oslo. Girded our loins and sprinted (felt like an hour for 50feet progress against the wind) to the flat spot from whence we had come. Took Marley's lead off and told her we were heading back. Well the excitement, she spun round several times jumped up to lick me and sprinted down the track leaving me behind. Mind you I knew how she felt. Thankfully again we were on the sheltered side for the steep part of the descent. Marley knew exactly where to go.

On the way down it felt like an eternity to get across that open section. The hail was like cannonballs and I was permanently walking at a 45 degree angle. We eventually reached calm weather back at the stables. I called Marley back to get a picture as the sun was coming back out. She looked so dejected as if I was asking her to go back up

She looked at me and looked over her shoulder as if to say Pleeaaassse can we go that way (picture below).

Walked back in sunshine until 20minutes from car and then a downpour - great!! 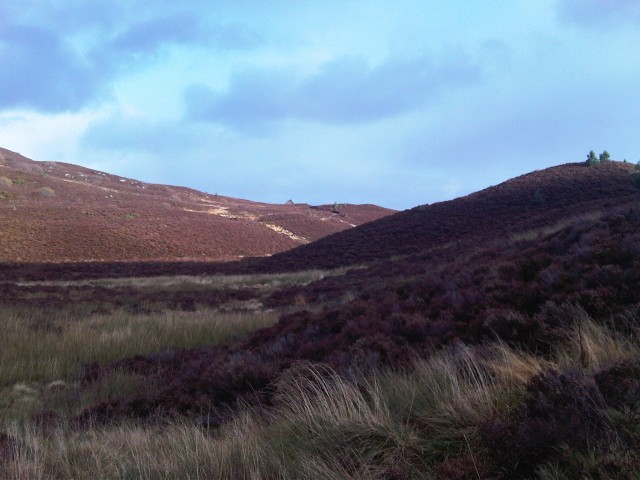 Over to Ryvoan. Weather pretending it would be kind!! 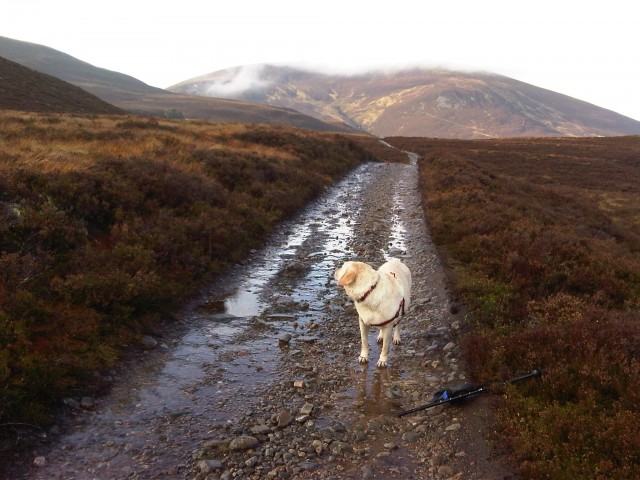 Nooo Dad. Home is that way! baggervance wrote:I knew she would love the walk and it was a particularly dangerous one.

Heh, tell me about it

. Must be something about this hill. The mere mention of the name still gives me the heebie jeebies!

I wonder though, if anyone has actually set off to climb a Munro and ended up in Oslo???

Of course that should say "wasn't a particularly dangerous one" but in the end it bloody was !!

The guy you met coming down was me, I was wondering on my way back off that hill whether you pushed on to the top or not. Glad to hear you made it in the end.

I am now safely back at work in the north sea after that ordeal on Bynack More. I have never done a walk on one day with such varying weather before ranging from nice to frightening!!

Come on that must have been a cake walk in park for you, if you work in the North Sea.

You must have set off very early to have met me when you did. The thing that surprised me was it was such a pleasant walk up to the stables and then went absolutely wild.

Good report Bagger....,
Sounds like you had a gale of a time.

I must admit if it was that bad i may not have went to the summit so well done and glad you are back with no incidents.

monty wrote:Good report Bagger....,
Sounds like you had a gale of a time.

I must admit if it was that bad i may not have went to the summit so well done and glad you are back with no incidents.