So here it is... My first walk report. I'm new to this page so it's a wee bit confusing using my online diary. Before tackling this I'd like to apologize for all mistakes in the text (English being my second language makes it all even stranger

I've been climbing for three years now, since I moved north, and I've already tasted some serious mountain walking. Sgurr Mhic Bharraich was relatively easy for me, but a special one at the same time. I knew that my husband had something up his sleeve - it turned out to be a fantastic birthday gift for any mountain maniac.

We drove down to Shiel Bridge hoping for good weather and there it was - lovely sunshine, blue sky with a few white clouds, refreshing breeze... What else could you wish for?
From Shiel Bridge campsite a well constructed (though boggy in places) path took us into Gleann Undalainn, crowned with splendid view of The Saddle and its Forcan Ridge covered in November snow... The Saddle from Gleann Undalainn

The path climbed up the eastern slopes of Sgurr Mhic Bharraich, eventually reaching small plateau with Loch Coire nan Crogachan. At some point I looked back - just to see the full beauty of Five Sisters of Kintail, presenting their white tops: The upper slopes of Sgurr Mhic Bharraich are relatively steep and slippery, but nothing too challenging for a stubborn panther

That's what happens if you let the cat out, my husband said, struggling to keep up so we took a short break to take more pictures... 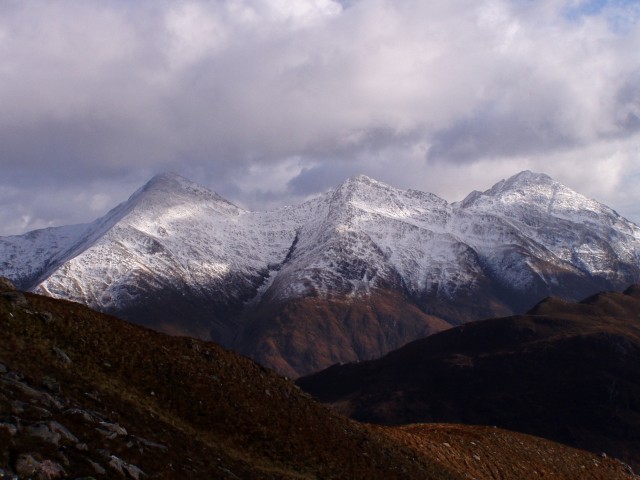 Finally, we reached the ridge and the main top showed up. So did the wind, I must admit. We stopped to put on our winter coats, and the blowing wind almost claimed posession of my rucksack

But that small inconvenience couldn't prevent the cat from reaching the top. 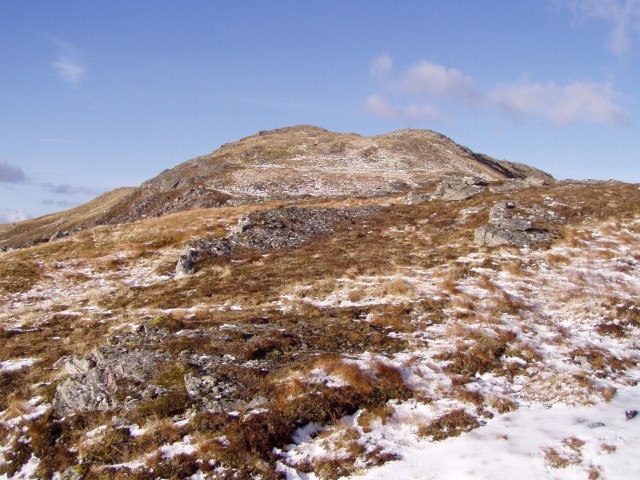 The top of Sgurr Mhic Bharraich

The highest point of the ridge is marked by a distinctive cairn. The views... aaaah... no comment. The best birthday gift ever! 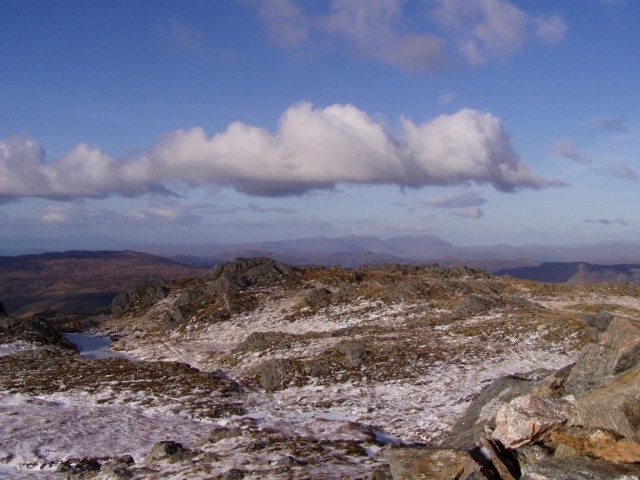 Looking west towards Isle of Skye 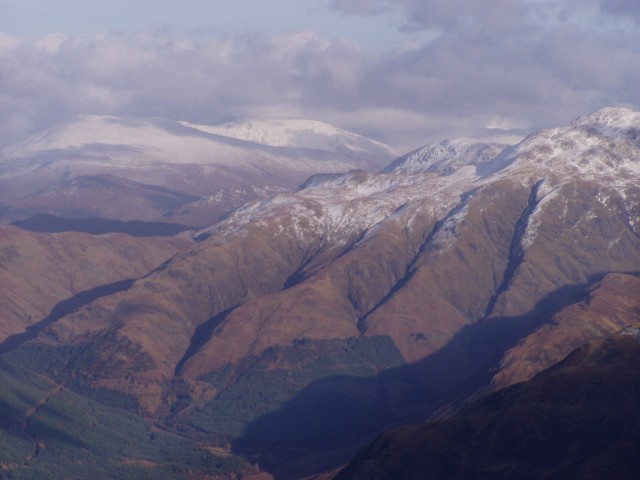 We stayed on the top for over 30 minutes... Regardless of ghastly wind.
Walking down the northern slopes of Sgurr Mhic Bharraich, one can look all the way along Loch Duich: The last part of the descent was wet and boggy, but the effort was rewarded with the beautiful panorama of snowy Sisters: 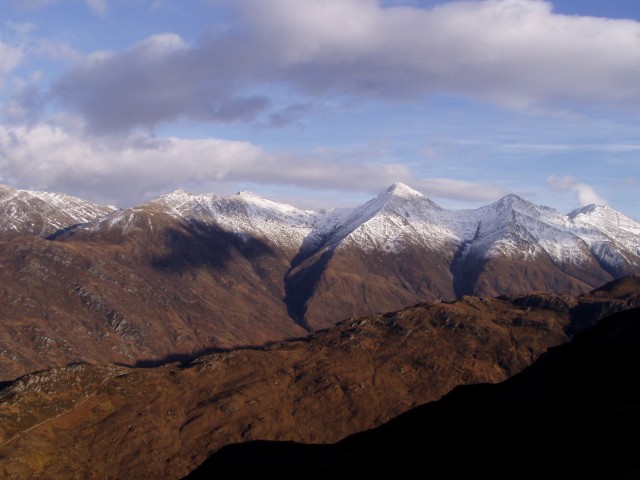 So... That's all folks! The whole circle, including breaks, took us about 5 hours and I have to say my birthday gift exceeded all my expectations

I've yet to get decent views from it - 3rd time lucky maybe!

pppuuurrrr !!!!! What a great walk in picture postcard conditions that has been caught beautifully by your photos.
I'm sure there was a feeling of a very satisfying birthday day out.

Yes good report on a fine hill - I followed the same route as you did.
Nothing wrong with your English either

Think your English is better than ours!

Great photos there, especially the afore-mentioned 'postcard' view of the 5 Sisters from the summit

- I was also morbidly interested in your 'Beinn Fhada' photo - it's actually A' Ghlas Bheinn next to it - but the ridge on the left of your photo with the forest at the bottom is where Richard and I were marooned for a very long time indeed trying to get off the end of it (you'd have to read my report for full details) but we only just got off the hill by dark after about a 12 hour day with everything going wrong and were absolutely soaked and fed up by then!

Which of the 2 routes you did would you say was least steep? I ask as being a mountain coward, I hate steep!

Hi everybody, thanks for all the words of encouragement - I always thought I was better at meowing than speaking English

. Really sorry if I got any of the description wrong. I never studied UK geography and I still find it difficult to spell (not to mention pronouncing!) the names of scottish mountains.

As for the steepness of the ascent, both ways are relatively similar, but I think it is much easier to climb this hill the direction we did (by Loch Coire nan Crogachan), as the lower part of the other route is very, very boggy. Going down that way I slipped a couple of times and almost sat in mud

I saved myself somehow but my gloves were soaked... yuck...

Still, it was a great walk, hope we'll get good weather this weekend... If not, maybe I'll update my diary a bit?

Ah okay - enough said... I'll leave the boggy bit till the end - that way I keep my feet dry as long as possible! Thanks for that

And Gaelic is a very difficult language!

I attempted this today. Main aim of the walk was to do Glen Undalain, as it had been the worst part of the Lochalsh Dirty 30 for me last year. Great weather-blue skies with some high cloud. A little bit breezy. As another mountain coward I wasn't sure whether I would actually attempt the rest of the ascent up Sgurr Mhic Bharraich. As the conditions were so good I decided to give it a go. I got as far as the wee plateau before the final rise to the cairn but bowed out with only a couple of hundred metres distance to go. I had found it a bit too scary and steep and couldn't face the last wee bit, even though I had got past the worst! I came back down by Loch Coire nan Crogachan so that I would be back on a path.
Even though I didn't reach the very top the views were magnificent, so I've got some good photos for my efforts