Thought I would do this 2-munro walk one day, camp by Loch Quoich, then do the Sgurr a' Mhaoraich walk the following day - but the weather was so good (and the stalkers paths so good) that I ended up doing both routes and all 3 munros on the same day (still camped, but meant I could do Ben Tee the next day instead and make the most of dry, sunny weather while it's here!).

So for the first walk of the day, I parked up at the parking area at NH029029 where there's space for about 5 cars, though just 1 other one there when I arrived. I set off back east along the road at 1030 to do the mountain walk East to West, turning off into the rhododendrons and onto the stalkers path to head for Spidean Mialach. 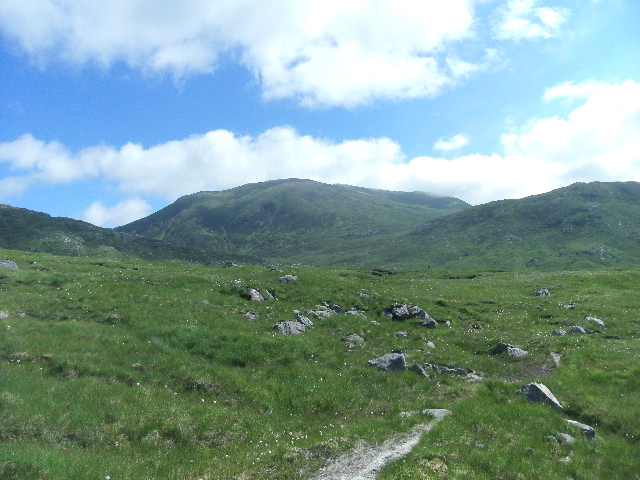 No bogginess after the dry weather, and the path was easy to follow up to a burn, where I met the walker who'd set off before me. She was looking at a map to see where the path went next as it wasn't visible on the other side, but I just decided to heed Walk Highland's route description which stated the stalkers path ends and you break off to climb the wide, steep slopes. So off I went, crashing through the heather on a pretty straight-but-steep diagonal route, only to look down and see there was a nice clear path at a lower trajectory, but heading up to the right place. That looked much easier! I cut straight across to join it, and it goes all the way to the summit cairn. 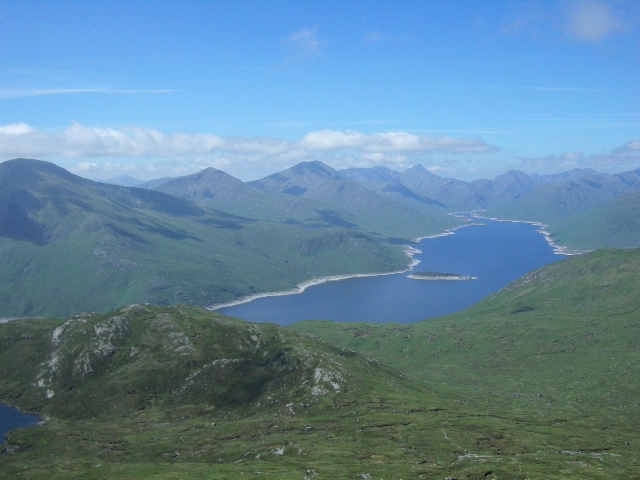 I don't usually hang around at summits once I've had a look at the views, but on such a sunny day with good visibility, no rain and barely a breath of wind, I was able to open up the map fully and spend a good 10 or 15 mins identifying the peaks around without it turning to Ordnance Survey paper mache or an untethered kite. The windfarm(s) towards Glen Moriston and onwards were obviously in similar windless conditions, as of the 70 or so I could see stretching away, not a single one was turning that day (or the next, when I saw them again from Ben Tee). The path along the ridge was clear to follow, though if it continued down to the Fiar Bhealaich, I completely lost it - I rarely do a walk without losing any path a couple of times though, so at least this is somewhere where it doesn't matter at all, it's easy to spot the ascending one on the other side that I had to aim for. So then up to Creag Coire na Fiar Bhealaich and on along the ridge to Gleouraich's summit, where there were more stunning views to Skye, Knoydart, Kintail, Ben Nevis and any other mountain in the area

> Again the map came out for a 10-minute 'name the mountain' session. 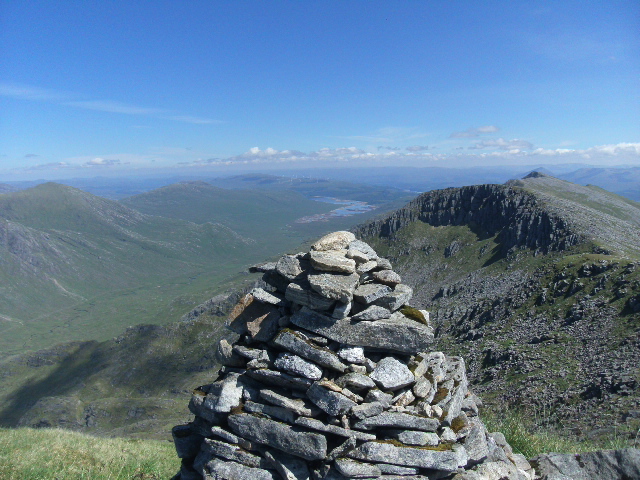 Gleouraich summit cairn, looking back along the ridge taken 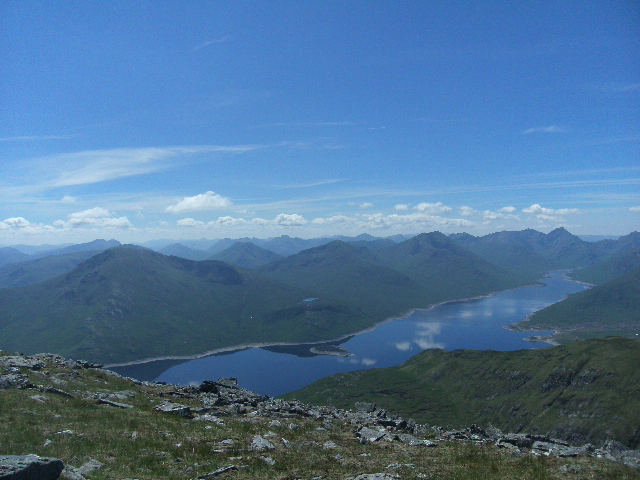 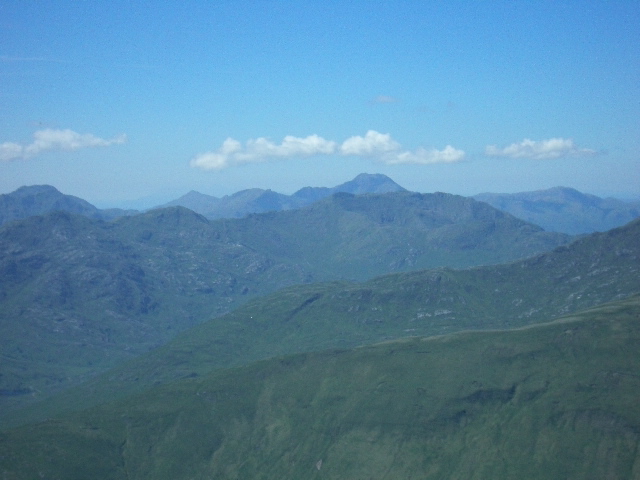 Heading off west to start the renowned stalkers path descent, I was surprised to see the development between the northern Loch Quoich munros and the South Glen Shiel ridge. Hydro scheme works? Estate expansion? Evil Bond baddy's mountain hideaway lair? The centrepiece almost looked like an airstrip with strips running perpendicular to be suitable for any prevailing wind direction, though maybe not quite long enough?! The tracks were more like roads; when I saw a car driving along the one directly below Gleouraich to the buildings it appeared wider than the actual public road alongside Loch Quoich. 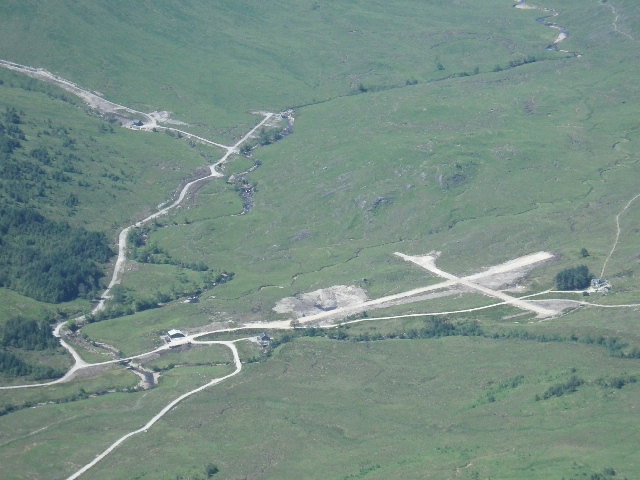 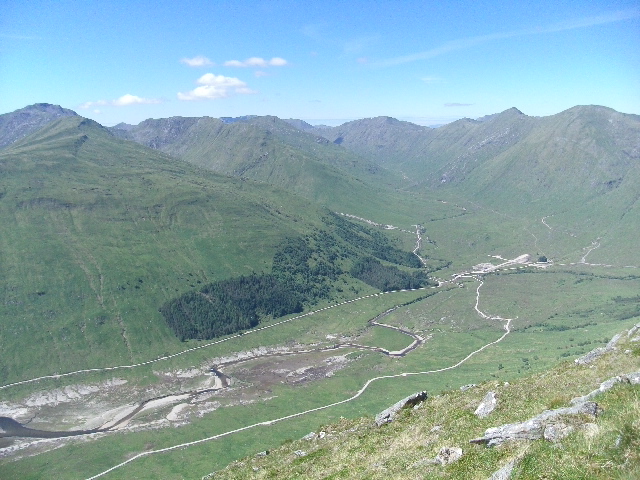 Still not blending in to its surroundings...

(I'd already decided that the day was long enough to do the second walk and so was going to head up to Sgurr a' Mhaoraich afterwards, but I wasn't sure whether to do the circular route to descend via Am Bathaich or not - this view partly put me off because of the long walk back along the industrial track, but partly tempted me just so I could go and be inquisitive about what it all was! In the end I just went with how tired my legs were and insufficient water for the longer route, so never got to explore...) 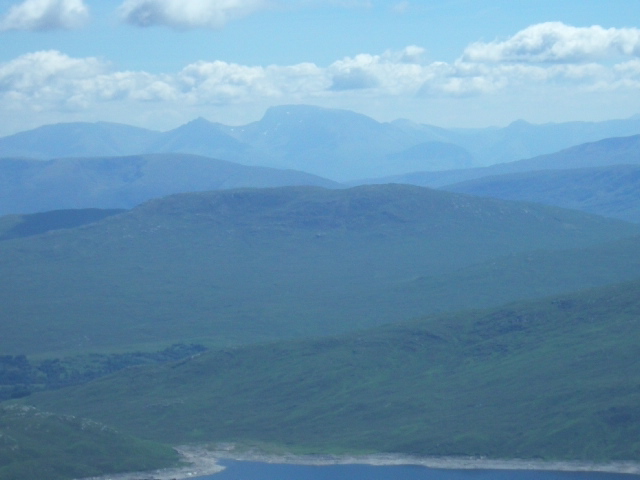 Anyway, back to this walk. The way down was great; the stalkers path was a lovely piece of engineering with the zigs and the zags at just the right angles and lengths for an optimal descent, with the added benefit of views across Loch Quioch. The mirror imagery of the loch and mountains was disturbed when a small motor boat travelled down back towards the dam ... it did cross my mind that maybe someone is following the Loch Mullardoch lead and is now giving hikers a boat ride down Loch Quoich to Sgurr Mor as that's the direction it came from, but maybe that's just my wishful thinking! 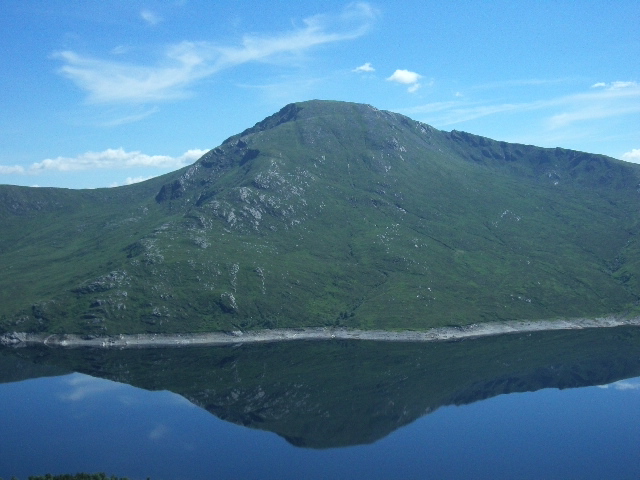 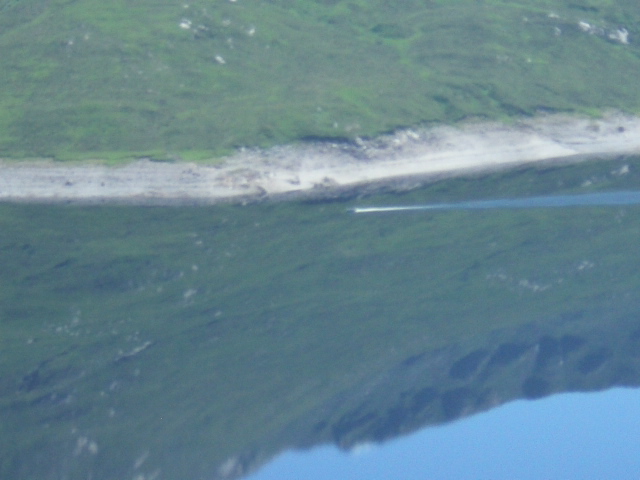 The path comes out right at the parking area, back at the car 3.45pm, which left me plenty time to drive a few minutes west to do the next walk as conditions and terrain for this one had been so enjoyable

The industrial mess would appear to be the workings involved in the development of three run of river hydro schemes on the Glen Quoich Estate.

Details of one herehttps://alpharealrenewables.com/projects/easter-alltbeithe.html and the rest on links on that page

I'll be up at Loch Arkaig or Glen affric tonight for a couple of days. Haven't decided which ones to do tomorrow 1st yet. Ill decide when i get to fort william which way to head tonight

If you're in the area give me a shout.

Skyelines wrote:The industrial mess would appear to be the workings involved in the development of three run of river hydro schemes on the Glen Quoich Estate.

Details of one herehttps://alpharealrenewables.com/projects/easter-alltbeithe.html and the rest on links on that page

Thanks for that - will just have to hope this is it at its worst and they'll do the remediation work to hide it better soon ...

(And on nightshifts from tomorrow unfortunately Coop, but hopefully next time you're up I'll be free?! Have a good walk wherever you go!)

(Agro-Industrial Complex notwithstanding!) - you got a grand day for it, anyway

!
That stalkers' path is a delight.