Scorchio Compleation on An Socach with Lynne Murray

Scorchio Compleation on An Socach with Lynne Murray


Well, here I am for my first report in a loooooong time, but, after a glorious day and a fab compleation for Lynne Murray, i thought I'd hit the keyboard again for a short round up of our day/ weekend. No scenic vistas and views,,just a bunch of good guys enjoying a great day to celebrate a fab wummins achievement.

Lynne had reached a bit of a stalemate with her hills and due to bad winter weather, a dodgy skiing accident etc, had not made any headway into her last 18 Munros, a figure that had remained unchanged since late 2017

In early May, with the fantastic weather and some decent planning, finally, things started to move, and move they did, at one heck of a pace

A couple of aborted attempts at Beinn Alligin, 3rd time lucky, A long hot but fun weekend in Glen Affric doing 5 Munros j to bag 3. 2 trips to Knoydart in quick succession,,just to confirm there was a view there afterall. A daunder round Bhrotain and M Mor in blistering heat, supping up 5 ltrs of water on the way and various other trips that Lynne will need to fill you in on she fast approached her final Munro, An Socach in Glen Ey.

With pretty much 1 weeks notice, a call went out for some company on the day.

Heather and I descended on Lynnes home on Friday night, with a very late arrival of our Breakfast Butler, Steve Smith shortly after midnight,,,his butling skills really need some work

. We were joined in the morning by Clare, Isabel and Mary. A two car convoy headed North for a 10am start,,,,which turned into a 10:30am start, mainly because the butler didn't have breakfast so needed to stop for Ice cream in Blairgowrie (and to buy his lunch hehe).

Joining us at the start point were Martin B, George D and Lynnes friend Juli from Fochabers making up a group of 10 mustering at the starting gate. At the starting gate and ready for the off,

On what promised to be a hot day, we were all sun lotion and midgy spray as we headed through the gate and up the track.

We approached the wee house at Baddoch with the red window frames with a paddock FULL of sheep heading for their summer haircut, some strong chaps shearing and the much cooler and lighter flossies bounding out the other side. 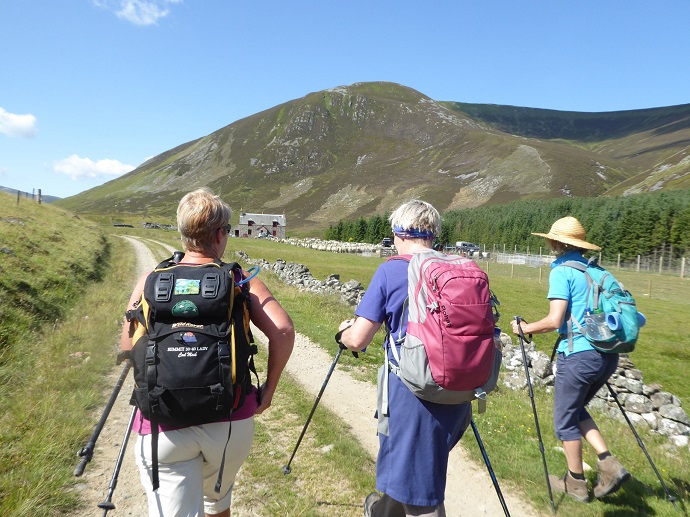 Baddoch cottage and the woolies We somehow managed to miss the fact the the first gate was sporting a chain lock,,,just for show, and took ourselves over the stile instead, carrying on up past the old sheep pens/enclosures on the right of the track under Sgor Mor, a minor summit I had come over some years ago with John.

The group spread out and continued our saunter, spotting a large herd of deer on the western slopes of Carn Aosda in the Cairnwell Trio. My first trip here was in November 2013 in very snowy and icy conditions, poles apart from todays scorcher.

Crossing the Allt Coire Fhearneasg the path shoots off directly to the right and up towards the cairn at Socach Mor (Big Nose) This cairn seems to have been somewhat depleted since my first visit,,my memory and all other descriptions talk of a tall cairn, my 2013 report likened it to a memorial of some kind,,,now it just looks like a normal cairn. 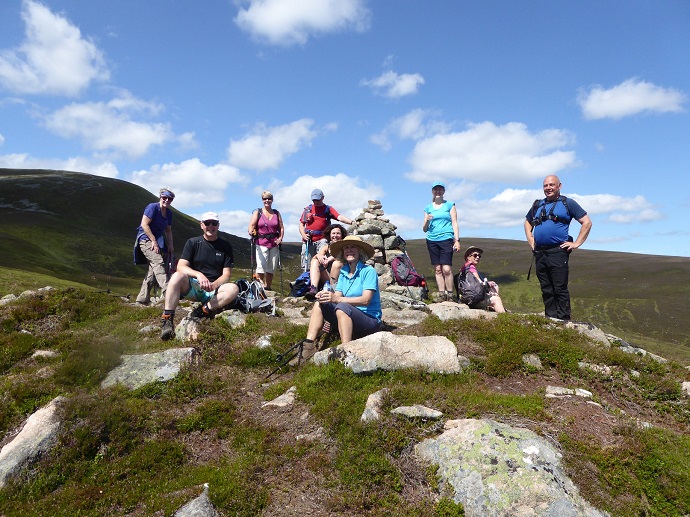 A short stop here to regroup then carried on the steeper and slightly rockier ascent before it levelled out on a grass corridor between the rocky bands. This was where I felt the heat more than any other time today,,steeper climb in approaching 30 degrees,, not my ideal situation lol

I spotted a mountain hare here,,back in it summer coat. Hook right and reached the eastern summit cairn at 938 mtrs. Another chance to regroup, hill-spot around the area and catch our breath.

The true summit is across a broad plateau with nothing more than an amble to get there. Fabulous views and photo ops,,so we just sauntered round.

As we approached at 13:30, Lynne hung back slightly to let the rest of the group summit first, and with a wee salute bridge of poles and an accompany cheer, Lynne made her passage to the summit cairn. 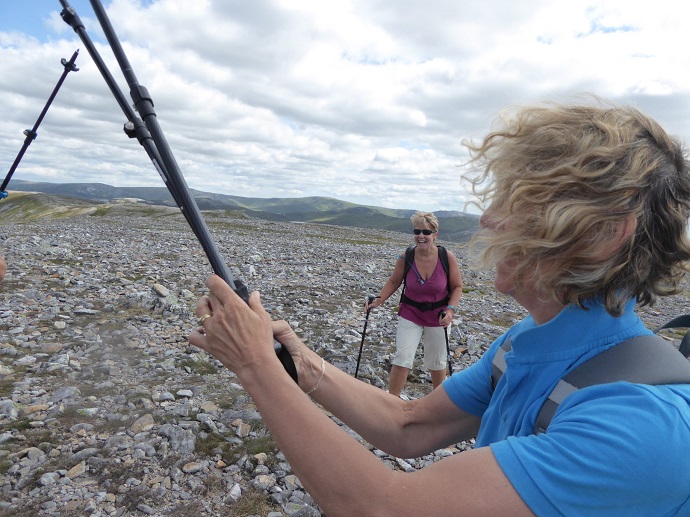 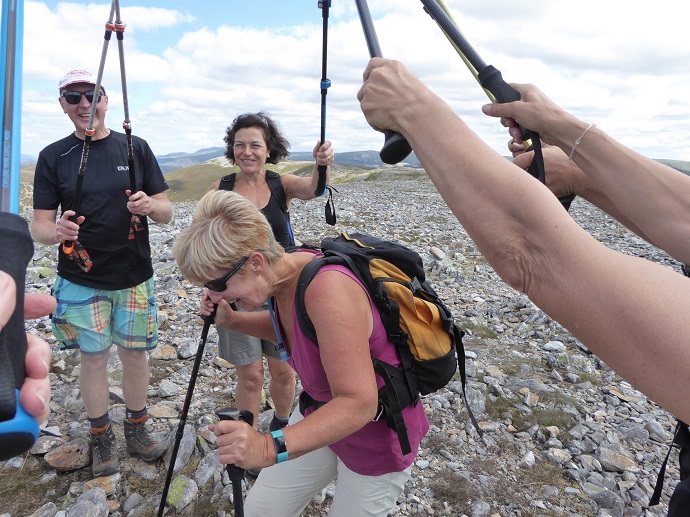 A wee snifter of whisky each, be rude not to lol 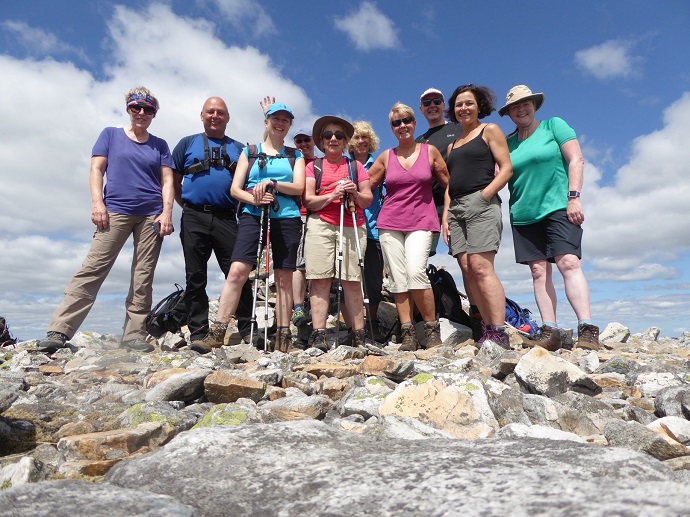 Happy crew at the top

[
Sitting around, again, we just soaked up the sun, had a chat, lunch, photos etc, what better way is there to spend a hot Saturday lunchtime? 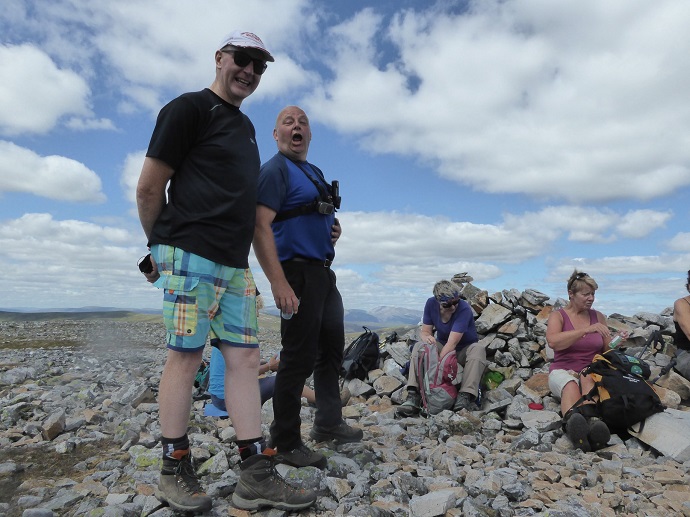 George giving us a song

Leaving the top shortly after 2, we retraced our steps down to the burn, topped out the water, (i emptied my water pack here as the water was actually hot, replaced with the chilled stuff, straight from the hills) 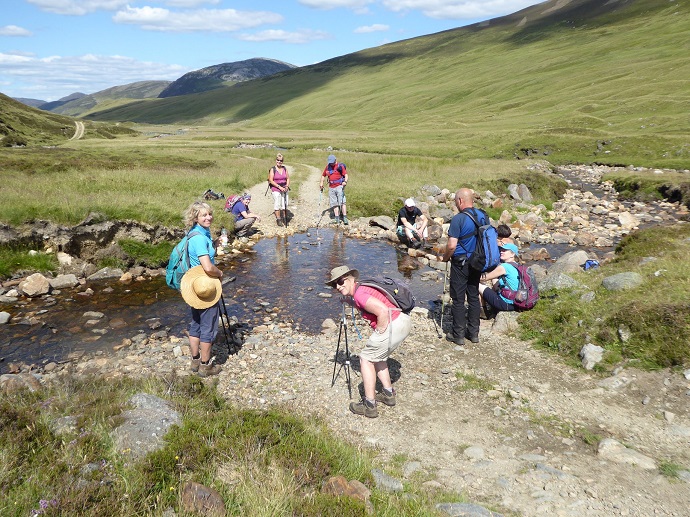 Finally cooling off at the bottom

A wee cool down at the burn then headed back down the track, arriving back at the car in just under 6 hrs.

We headed down to the ski centre for a)the loo and b) a cup of tea,,at the shee,,so pee and tea , @ the shee. Bit of a downer here as we arrived a) to find out England were 2-0 up in extra time and b) the shop closed in 4 minutes and the staff were NOT afraid to point this out as we ordered tea (and cake, Steve Smith

) The telly was then unceremoniously switched off and we were then sitting outside drinking the last of our tea. The staff had literally packed up and all left the car park as we finished. lol Scottish hospitality at its best. 5pm on a glorious summer day, SHUT!

Anyway,,this could not take away from the fab day we had, and I really hope Lynne enjoyed it as much as I did. Its also worth knowing, and I hope Lynne doesn't mind me saying, but after a car crash 20 years ago, Lynne was told that in all probability, she would not walk again

HUGE congratulations on your compleation Lynne and I'm sure its a BIG thanks for letting me, Heather, Juli, Clare, Isabel, Mary, Steve, George and Martin share it with you. 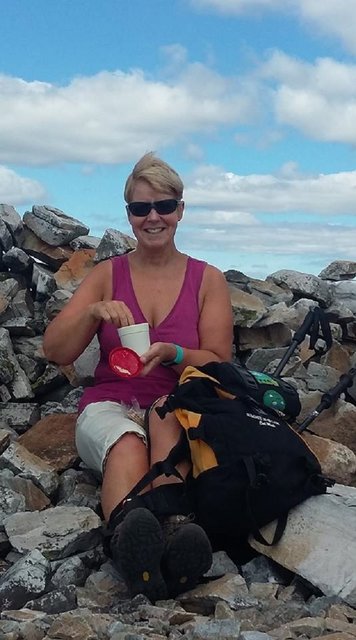 and congratulations to Lynne especially given the post car crash diagnosis !

Great stuff Lynne, was a privilege to have done a couple of minor ones (

) with you, on your journey!

Nice one Gill and of course well done Lynne

See you at the end of the week for the next huge gathering - Skye here we come.

Nice one Lynne, glad you had a great weather day, many congratulations on your achievement

brilliant write up: both of you are inspirational, makes me want to be at a compleation! As for glenshee cafe, we had similar experience but went on to Bridge of Cally hotel and were made very welcome there! Gill you should write more!

Well done Gill on the report and MASSIVE well done to Lynne for sheer persistence on compleating the munros. Given what you have been thru this is an awesome achievement. Will look fwd to sharing those bubbles with you on Skye.

Great report Gill and glad I never missed this one, a great walk in great weather for a great committed girl, Lynne Murray

Nice one Gill and of course well done Lynne

See you at the end of the week for the next huge gathering - Skye here we come.

Nice reporting. Again well done Lynne and thanks for sharing your day. First completion I've been to, what a great day including the evening BBQ and chocolate bananas and of course the leftovers BBQ. Long may your celebrations continue. Have a great one on Skye.

Congratulations Lynne........another one crosses the finishing line before me

brilliant write up: both of you are inspirational, makes me want to be at a compleation! As for glenshee cafe, we had similar experience but went on to Bridge of Cally hotel and were made very welcome there! Gill you should write more!

You are indeed gracious. Many thanks,, I used to write up all my hills,,,then they all merged too quickly and i gave up lol

Lynne will be pleased, being called inspirational twice in once week lol