Weather Conditions
Some early morning, low lying cloud which the sun soon burnt away, glorious sunshine all day otherwise, with gentle winds atop each peak, making our 5 Munro challenge much easier - although I have to admit the heat did make it more of a struggle - not that I'm complaining!

Walk Experience
We'd only just climbed Lochnagar around 7-8 weeks ago, and I wasn't completely confident we were going to make our way right around this trail (being novices), so I was reluctant to start this route from the Lochnagar side. The ascent looked better from Broad Cairn when I plotted the route, and I do like to be different

so we decided to tackle this in reverse to the normal recommended walk description. I'm very pleased that we did it this way and also pleased to say that it clearly worked out well, as we were able to complete it!

We arrived at the Spittal of Glen Muick car park around 8am, parked up and made a move. Even though we had doused ourselves in Smidge, the midges were so bad at this point and I was unable to get away bite free

we made our way along the start of the Loch Muick path in a clockwise direction, eventually taking the left and upward fork over the Black Burn then snaking up the steep scree path in a zig-zag, the path was very loose and because it was steep - quite slippy - and it wasn't until we were working our way back to the car at the end of the day that I realised how glad I was that I wasn't descending on that path with my legs as tired as they were, I may well have had a few bum landings! 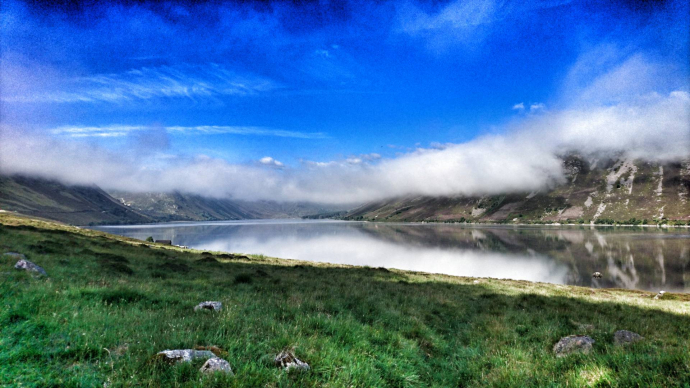 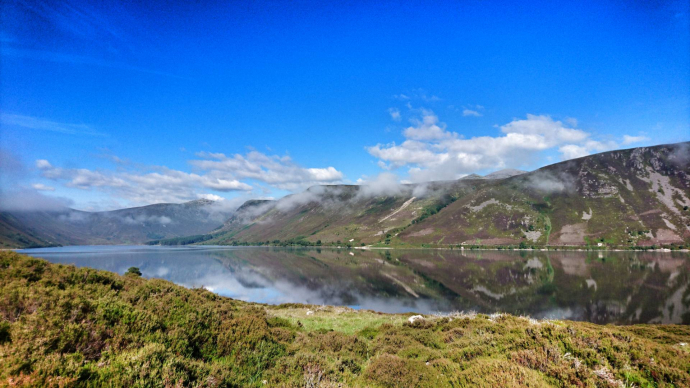 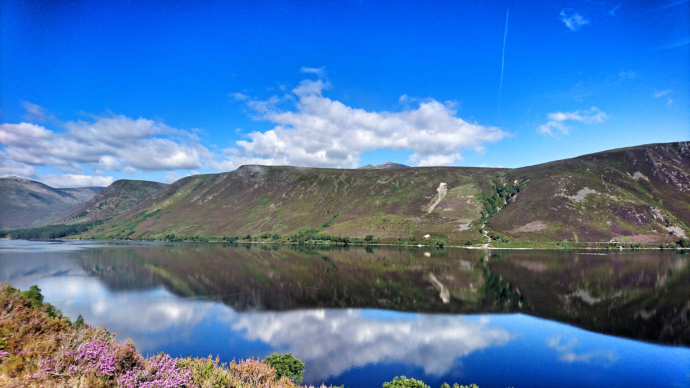 We arrived atop Broad Cairn in good time with glorious views over the Loch and down to Glas-allt-Shiel on the way, we were getting slightly frustrated as we kept losing the path up to Broad Cairn and just really ended up scrambling over the rocks in order to get a more direct ascent, but it was short lived and we were soon up and enjoying a morning cup of tea. 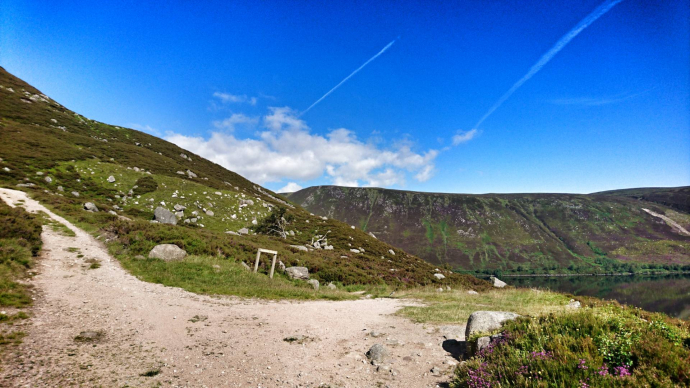 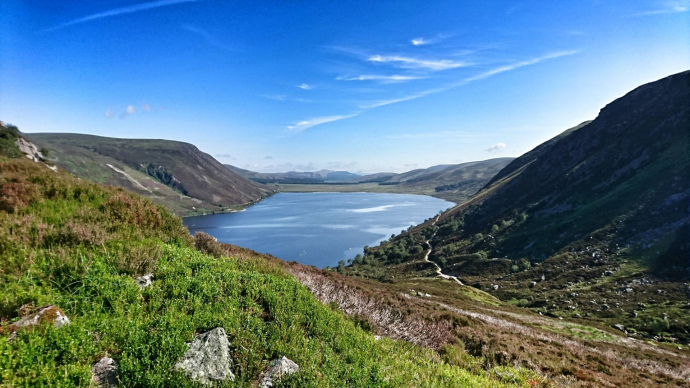 Stunning views NE over Loch Muick, we were in for a jolly old time. 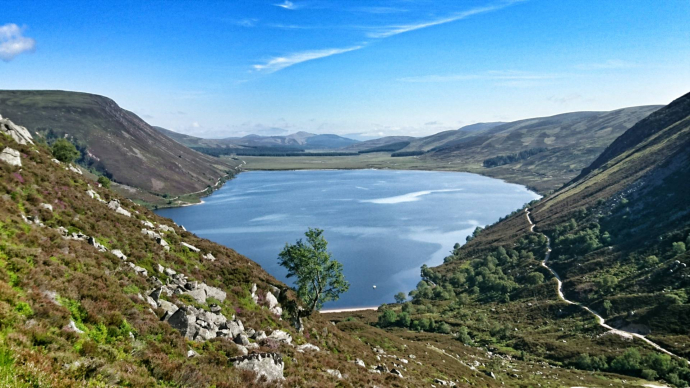 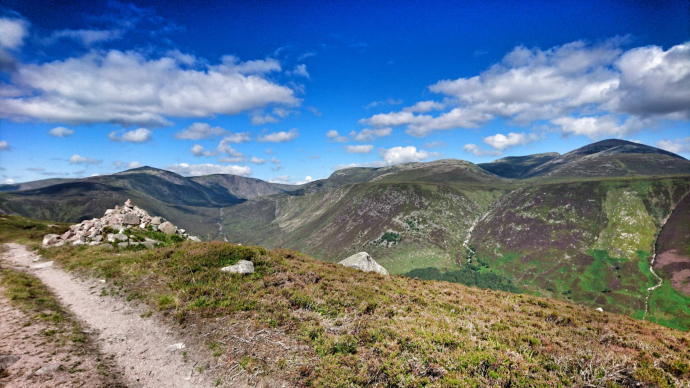 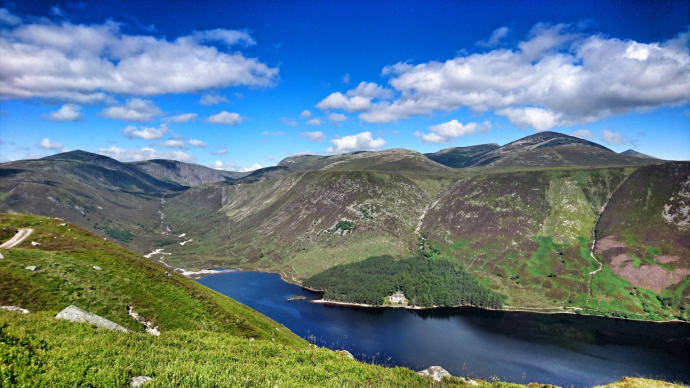 Looking down to the Glas-allt-Shiel 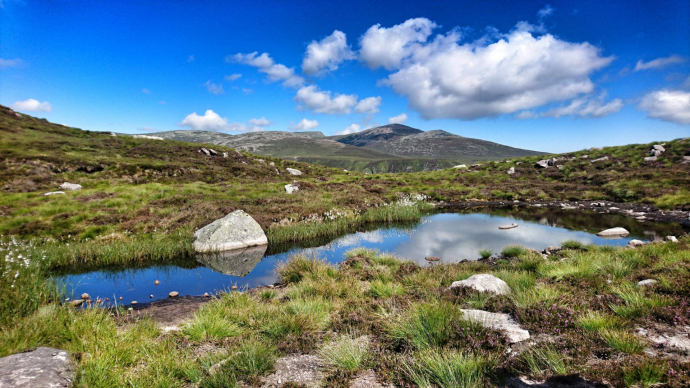 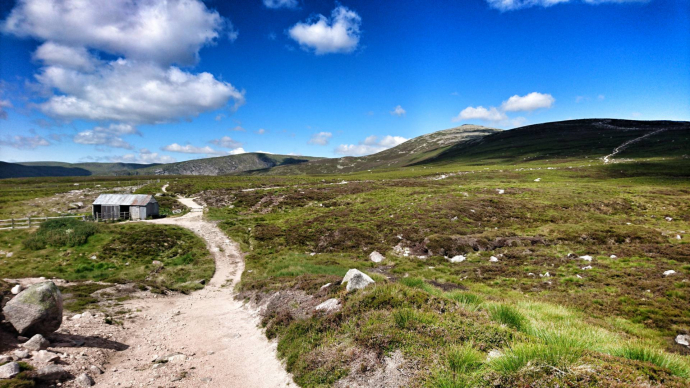 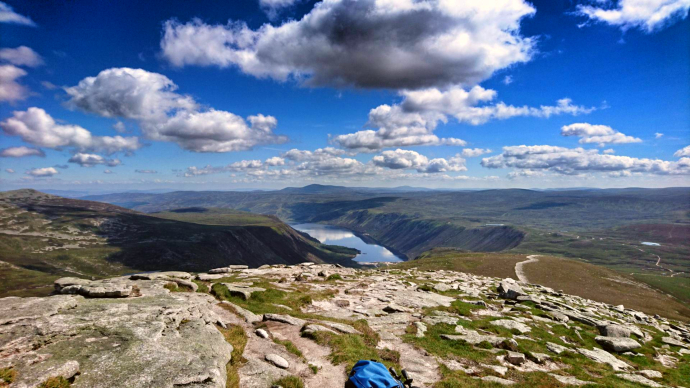 From the summit of Broad Cairn looking over Loch Muick

The walk on to Cairn Bannoch was short and sweet, with a pretty flat plateau, we didn't hang around at the top for much longer than to take a few pictures - and consult the route I'd plotted, just to double check we were going the right way 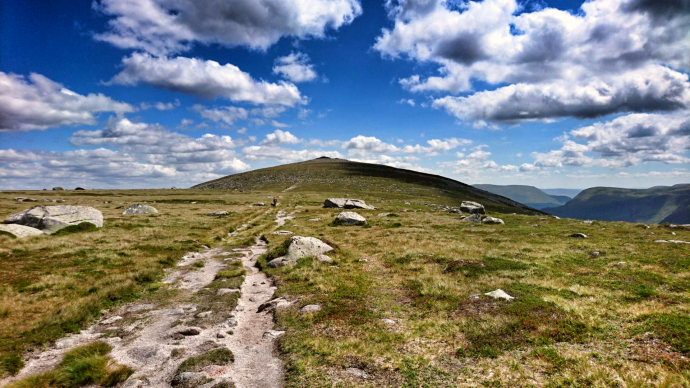 Looking back at Broad Cairn en route to Cairn Bannoch 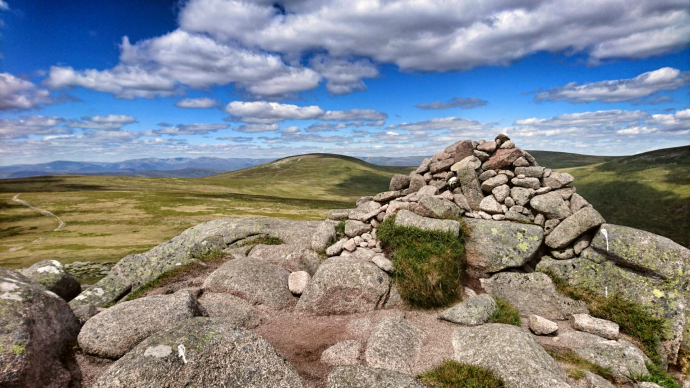 On to Carn an t-Sagairt Mor, which really is quite a flat plateau with a steeper ascent I found, however there was a much better formed path to this one compared with the previous two, but most interesting (? maybe that's the wrong term) was the remains of a RAF Canberra jet that crashed there in 1956. There are still very large and prominent parts of the jet sprawling across the summit, and there was quite a sombre atmosphere atop it, we felt. We spent a lot of time around here, looking at the crash remains but also enjoying the scenery and lunch. The scenery up here was the best of the day so far. 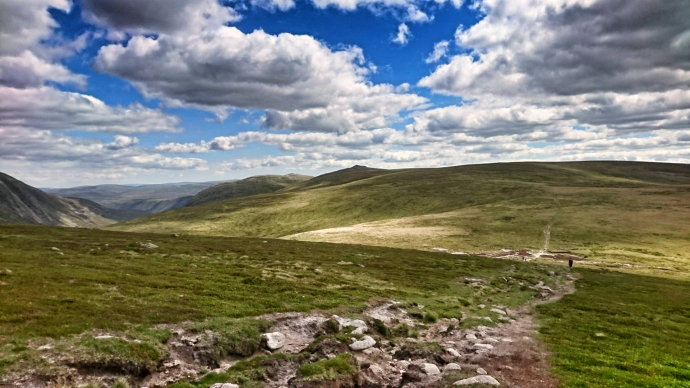 Path leading from Cairn Bannoch to Carn an t'Sagairt Mor 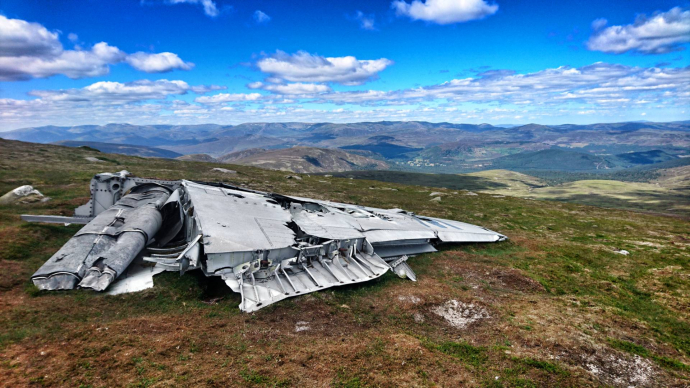 After lunch we pressed on down and up again to Carn a Choire Bhoidheach, again a fairly flat and sprawling summit, but with excellent views of the surrounding Munros we'd climbed previously, as well as Lochnagar. The ascent felt like a slog at this point, I think I was starting to tire. I'm an amateur after all. There was no marked path that I could see in any of the maps I looked at when I plotted our route, but there is actually a clear path there that leads up to the summit. We didn't hang around too long here either beyond taking some pictures and of course enjoying the scenes. We could see Lochnagar and decided to press on, but instead of rejoining the path we cut straight down the boulder field and rejoined the path further up and closer to Lochnagar. We were lucky we've had dry weather in recent weeks, as the boulder field was still fairly boggy and I reckon if we'd had "normal" Scottish weather conditions then we wouldn't have been able to cut across the way we did. I was surprised that we'd made it this far and also surprised that I felt like I still had one more Munro summit in me, and Lochnagar was quite the finalé 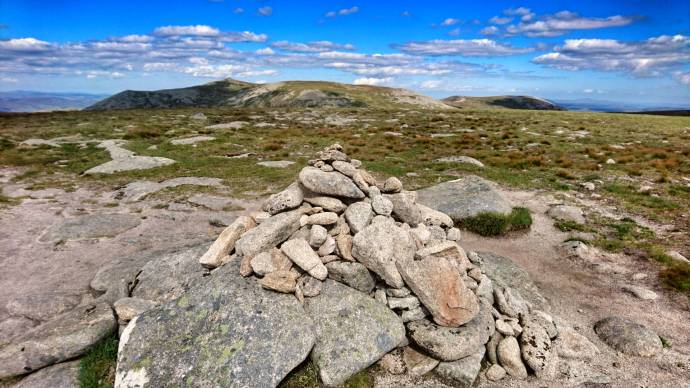 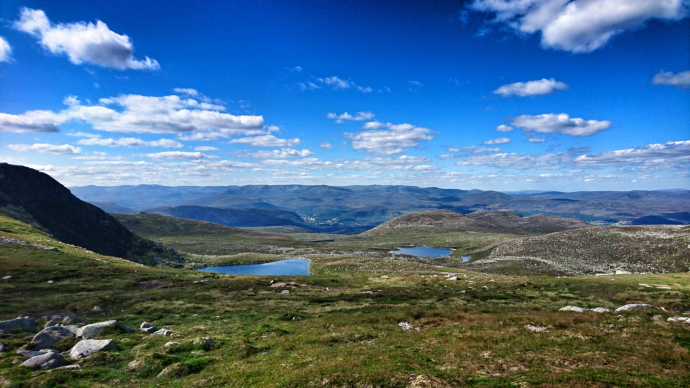 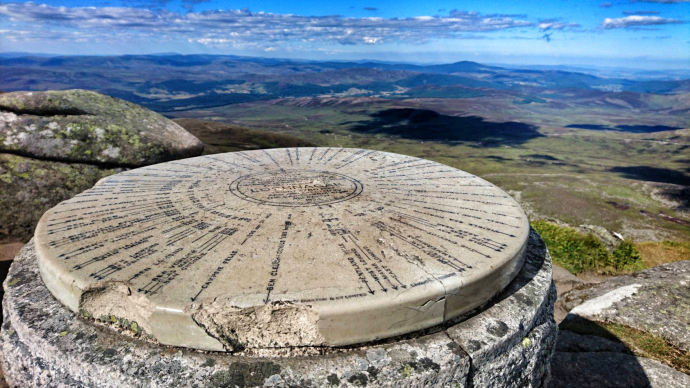 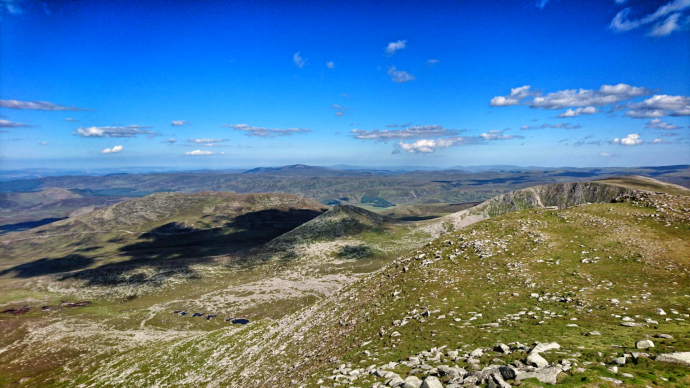 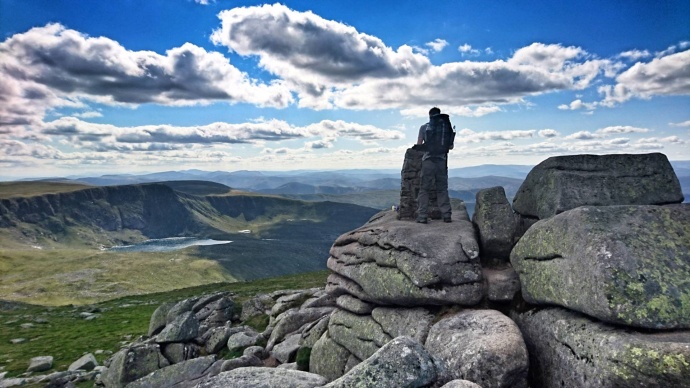 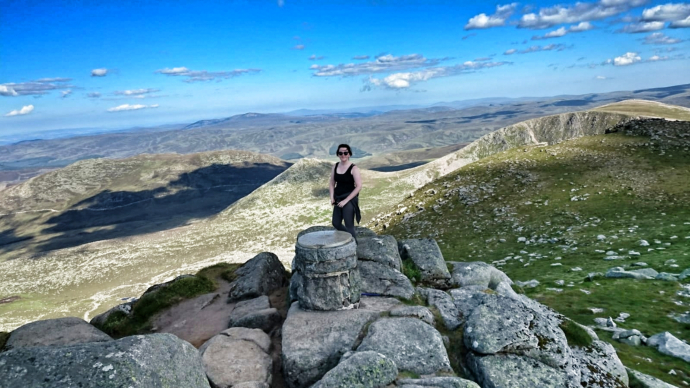 Evidence I made it there too!

Quick descent halfway down before we stopped for one more sandwich before the car-ward stretch. Legs pretty tired by this point and the descent was proving to be a bit of a killer, but as noted earlier, I'd take a boulder field over steep scree for a descent any day! 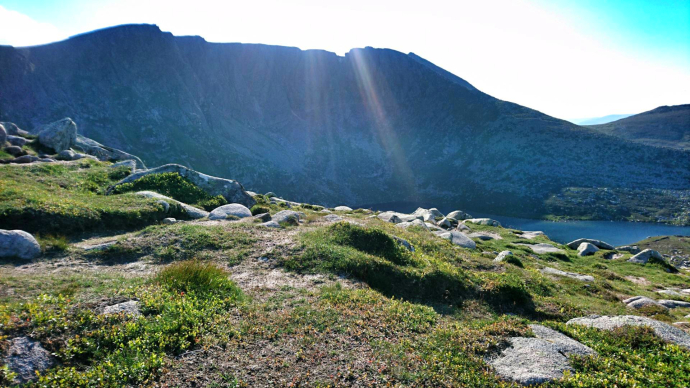 Last food stop of the day 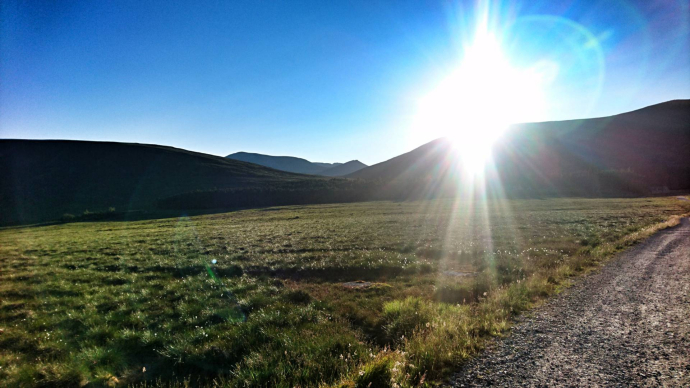 Looking back at Lochnagar - what is that bright thing that's been in the sky so much lately!? Anyone!? 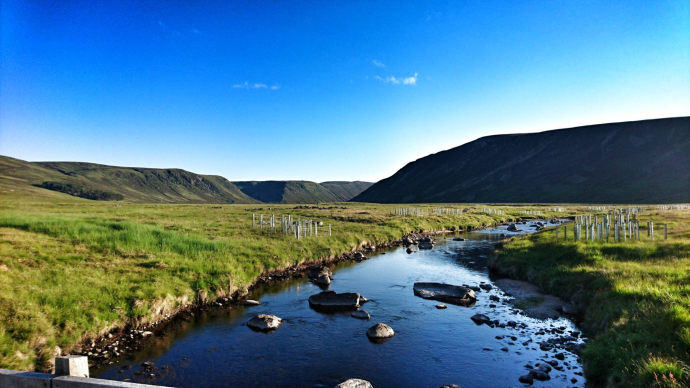 Looking back up towards Loch Muick, from here I could see that steep scree path I was so happy to be nowhere near at this point.

Overall I absolutely loved the day out and was delighted I was able to complete the trail. I'd even recommend trying it in reverse order!


20180709.gpx Open full screen  NB: Walkhighlands is not responsible for the accuracy of gpx files in users posts

Great description of the route and fantastic photos

I was hoping to do these hills last week .... but managed to time it for the 1 day when the cloud was down, so did Mount Keen instead. Going to try for these again on Thursday, can't imagine I'll get conditions as perfect as yours though!!

gld73 wrote:Great description of the route and fantastic photos

I was hoping to do these hills last week .... but managed to time it for the 1 day when the cloud was down, so did Mount Keen instead. Going to try for these again on Thursday, can't imagine I'll get conditions as perfect as yours though!!

Thanks very much! Ahh, we did Mount Keen a couple of weeks ago - got a separate post on that where we also got glorious weather. Keeping fingers crossed for you to get as lucky with the weather for the White Mounth Munros as we did

will be interested to know which way around you decide to do it, and how you found it!