Ridges and panoramas in the Fannichs

Ridges and panoramas in the Fannichs


As the day before, I started the walk from the parking 6 km beyond Braemore junction. Two gentlemen from Cheshire had already arrived before me and were just setting out when I started putting on my boots.
The by now familar track led me again to the new bridge across the Abhainn Cuileig. According to the walk description, a track would fork off to the left after 50 m. In fact, the track forked off just a few steps behind the bridge, as I found out after having followed the main path around a knoll and past a dead sheep back towards the bridge.
The track led to another bridge, not marked on the OS map, over the Allt Breabaig, and then continued up the valley before joining the stalker's path again. I picked my way up the lower slopes of Meall a' Chrasgaidh, around some crags, and the on towards the summit across the less steep upper slopes. As so often with the first ascent of the day, this one was more tedious than enjoyable, and quite long. The summit seemed to recede at the same speed I went towards it, kind of an optical illusion. The ground became rockier, and finally the summit stopped trying to escape and let me bag it. The shadow of my new Aussie hat on Meall a'Chrasgaidh, An Teallach in the background.

The weather was as bright and warm as the day before, but the wind even stronger. Feeling uncomfortable in the chilly wind, I had to put on my wind jacket. With the burning sun, I soon felt too hot and very thirsty, and most of the time I changed between open jacket and closed jacket, drinking often without being able to quench my thirst properly (the same bizarre thing would trouble me very much the following day on my epic Fisherfield round).

From here on, the walk was very enjoyable, and the views just fantastic. I made a small detour via Càrn na Criche, a Munro top at 961 m altitude. Sgùrr Mòr was looming large to the Southeast, dominating the scene. Back down towards Clach Mhòr na Beuchdaich, I could already admire visually the beautiful ridge of Am Biachdaich, leading up Sgùrr nan Clach Geala. There was some snow left at the little lochan, a beautiful contrast to the yellow grass and blue sky. 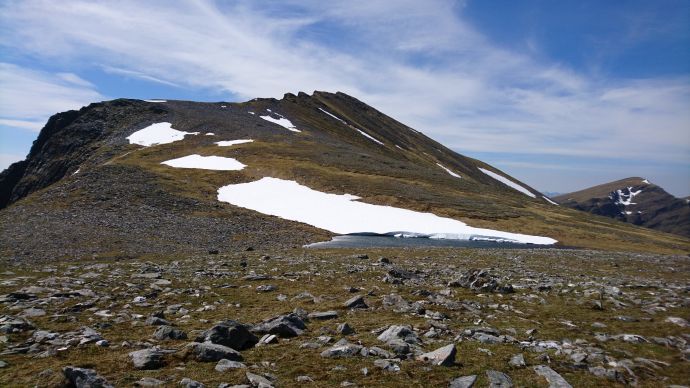 Snow in the lochan, An Teallach The walk up the ridge was pure delight, and the summit of Sgùrr nan Clach Geala was reached all too soon. On the summit, I met the two Cheshire gentlemen again who had walked up from the other side, going to Sgùrr nan Each first, and another group. The panorama was extensive in all directions, canopied by a beautiful blue sky with some white clouds interspersed. Leaving Sgùrr nach Clach Geala, I noticed that the hollow of my knee didn't hurt anymore from my unexpected step into a deep hole the day before, and the wind was much less strong now than it was in the morning. With the forecast for the following day being excellent, this was the moment I decided to walk the Fisherfield round the next day. The prospect elated me, as did the view of the nice ridge I would now follow to reach Sgùrr nan Each. The ridge leading to Sgùrr nan Each, Loch Fannich in the background. The stream is the Allt a' Choire Mhòir.

Basically the same view, this time as a panorama from Sgùrr nan Each.

The walk down to Cadha na Guite and up Sgùrr nan Each was pleasant, and the summit bagged quickly. Looking back to Sgùrr na Clach Geala, Sgùrr Mòr to the right.

I retraced my steps to Cadha na Guite, where I turned left to join the stalker's path along the Allt Breabaig back to the road. The guide book said to avoid the "bands of crags" below Cadha na Guite. As far as I could see, there was only one long band of crags extending from one side of the corrie to the other, but I found a good spot to go down with only very little scrambling. The path was soon joined, and from then on it was just a matter of covering the distance back to the car. Next to my car, a Scottish guy just prepared to set off with his tent, intending to climb all the Fannich Munros in one go. I wished him good luck and set off to my accomodation for an early night, with the Fisherfield round already very present in my mind...

2018-05-27 2. Wanderung_reduziert.gpx Open full screen  NB: Walkhighlands is not responsible for the accuracy of gpx files in users posts