I arrived at the road end to find a 'No Parking' hand written sign stuck on the fence and I could see why, they were cutting trees and taking timber out so would need the whole of the entrance to get the lorries in and out, so I turned around and parked at the lay by just along the road. Room for 4 cars anyway if everyone is considerate in their parking. I got my gear ready and set off. Bit overcast with cloud over the tops. Still hot and humid in the forest, no need for fleeces, short sleeves would be fine. The track was well worn, tree felling to the north at the entrance, but I didn't see anyone working till I got to the point where the track divides and I left the tree felling behind. The track has been relaid with hard core and earth to accommodate the lorries as far as the divide. Timber stacks very much in evidence around here as this is where most of the felling taking place. Just need to be alert, no issue with walking through. After the divide, the track is little used and the trees get closer as the end approaches with the last 50 yards actually in the trees. Out of the forest and the path continues through a gate, no need to use the style. Out onto the hill through an open gate. Bit cooler now, so on with the jacket. From here a worn path heads up towards Beinn a'Chaorainn. Couldn't see the top and Beinn Teallach was pretty well covered. The plan had been to go round them both, but I'd have to see what the weather did, I don't walk to tick boxes, photos are the main reason. Walking up to Meall Clachaig there were faint paths, some no doubt sheep tracks so I kept aiming north of the high point to avoid any unnecessary climbing. Picked up and lost tracks as I went. I reached a point where I could see the rest of the route before me and the cloud looked to be rising. Was it me being optimistic? I picked up another faint path and started the climb up. A mixture of grass, boulders and loose stones with bits of path followed. I hit the cloud and tried to keep the edge of the corrie in sight to stop going too far over. I wasn't in any hurry, it would lift wouldn't it? I just had to give it time. It started to rain just to cheer me up. Put another layer on as I was feeling the cold in the rain. It was intermittent rain now as I headed for the top. Eventually reached the cairn at the start of the ridge. I had 4G reception on my phone and WalkHighlands map open happily showing me the location on the route. I now had to walk north to reach the summit. It wasn't too far and again used the side of the corrie to guide me. Yet another cairn, smaller than the other one? Sure enough on the phone, this was the top. Nothing to see but scotch mist in technicolor. So I sat down and had my lunch and sure enough it started raining again. I put my yellow plastic poncho on to cover up my camera and rucksack as I finished my lunch. Took my time, it is supposed to clear up right? I walked about round the cairn to keep warm, but eventually gave up. I had looked down the corrie edge and there was no sign of anything like the edge of the cloud coming up to meet me, so I returned to the first cairn. Still nothing, so still wearing my poncho as I was reluctant to take it off, set off down the hill. I wasn't going anywhere else in this. Quarter of the way down met a guy coming up, so I wasn't the only mad person walking here today. We confirmed the 'path' was really hard to follow, despite this being a munro, nothing to do with the weather. He was also planning to do the two hills but would again hope that it would clear up later. I wished him good luck and continued on down. Got a bit far away from the corrie edge and headed back over till I could see it again. I didn't bother to look for any path. I was back at the Meall and only just coming out of the cloud, so it was worse than when I walked up. I checked for the edge of the forest and headed down as directly as possible and did eventually get back onto the path back to the gate. Took my poncho off and my jacket before walking back through the forest to the car. Noticed a cairn along the way and a worn path into the trees. Was this a short cut to the hill? If it is I wouldn't have tried it, no idea how easy it would be to walk through. The work had stopped when I got back to the felling, no one around. Glad to get back to the car. The walk along the road was good because they have cut the verge and I could walk behind the crash barrier. It started to rain again as I drove off. Good decision not to continue, hope the other walker did the same. Gate to the hill 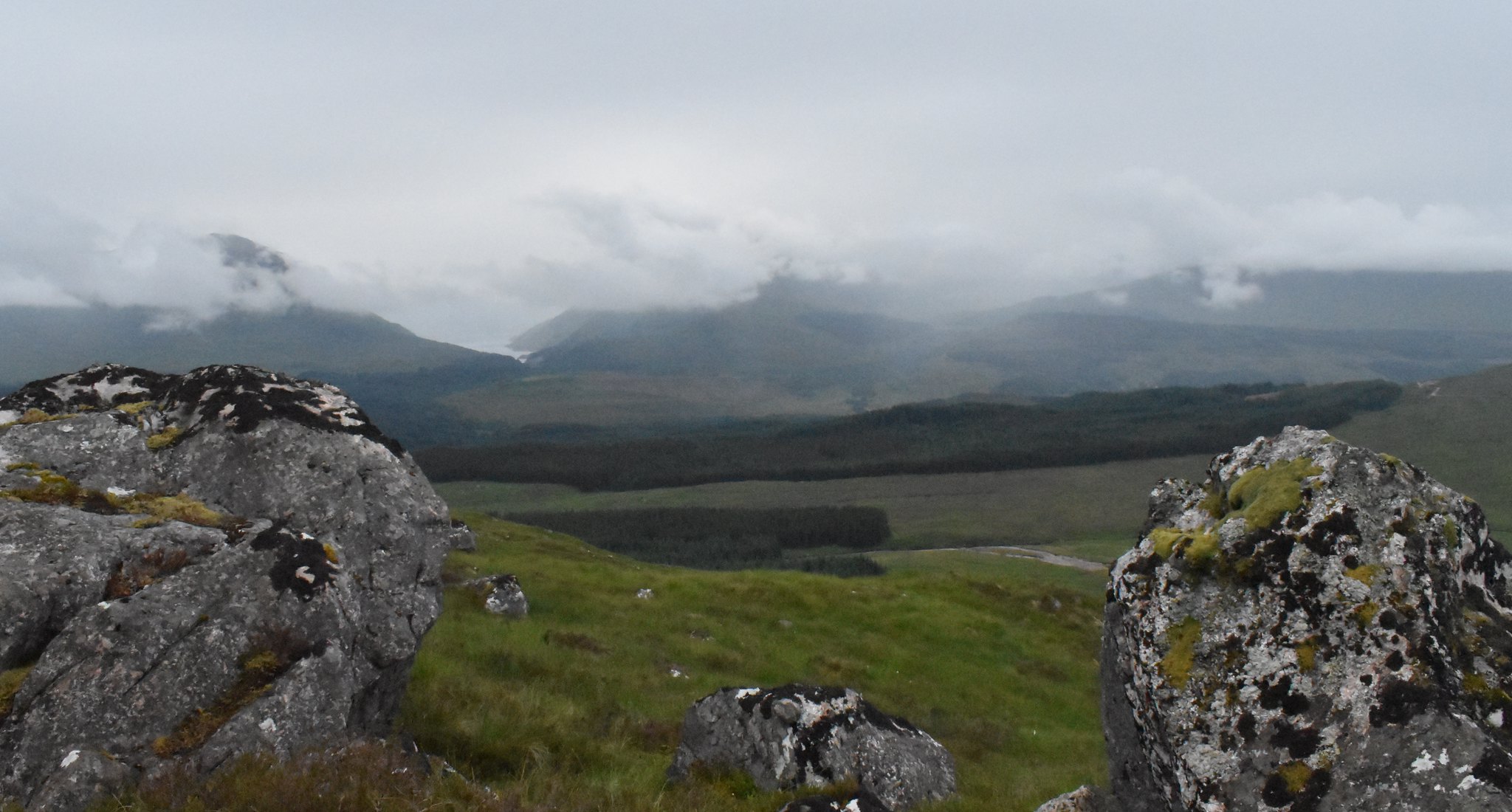 Loch Treig in the cloud by Joe Kincaid, on Flickr 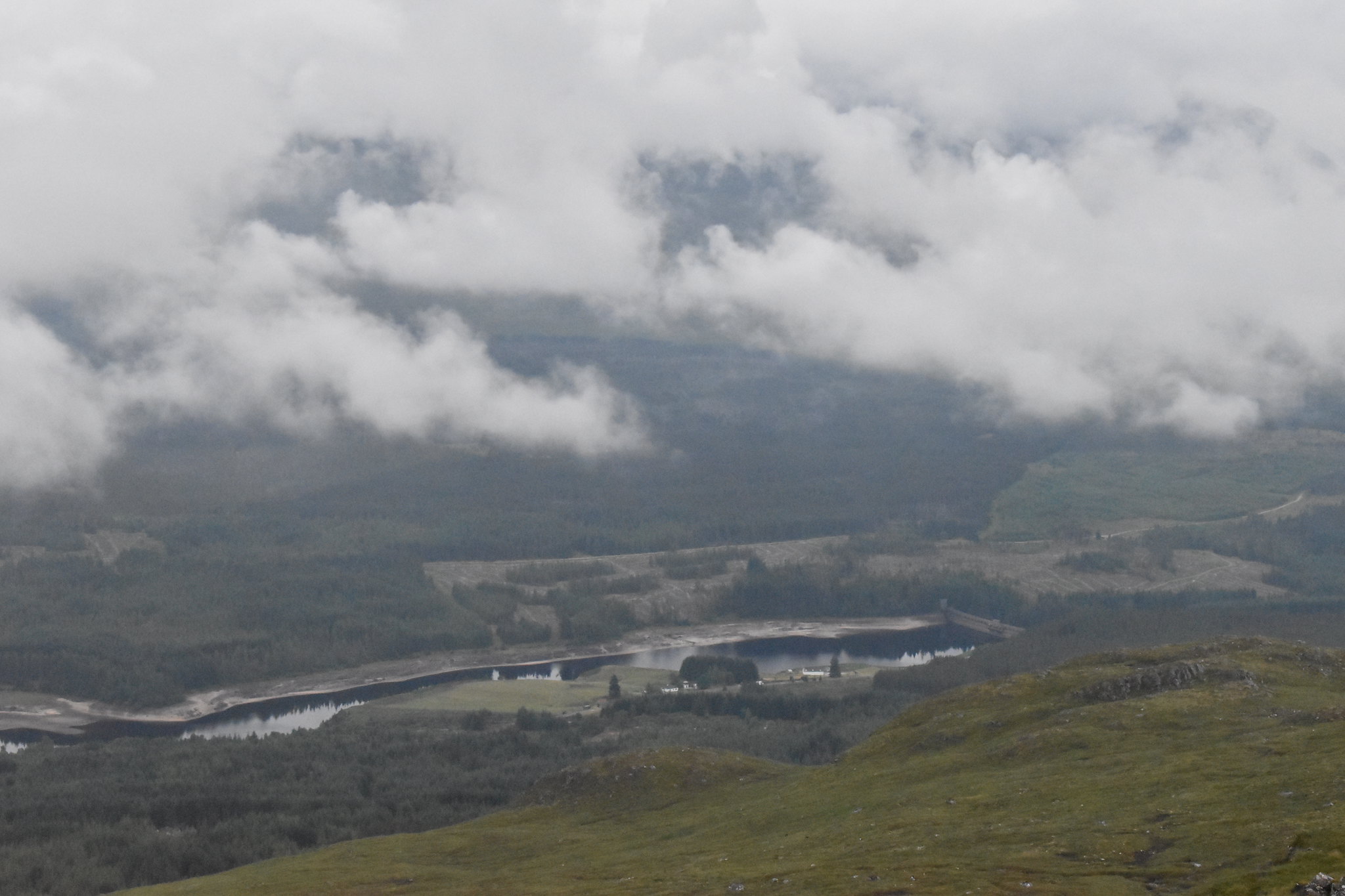 Cairn at top of climb