My trips to the Highlands in recent years had gradually taken me closer to Ben Nevis, and this year was the time finally to set foot on the mountain. The weather forecast was fine with dry ground conditions and little wind, so there was no reason not to take the more adventurous route via the Carn Mor Dearg Arete. The first part of the walk from the North Face car park was through shady woodland, with joggers and dog walkers for company. Then the trees were left behind and the cliffs of Ben Nevis appeared ahead. After pleasant walk on a good path above the Allt a'Mhuillin, the slopes of Carn Mor Dearg were eventually tackled on a steep but clearly defined track. The eye and the camera continued to be drawn to the Ben. Looking down towards Lochan Meall an t'Suidhe, I contemplated the "rough, pathless descent" to the Allt a'Mhuillin that was in store for later in the day. The relentless slog up Carn Mor Dearg brought ever more spectacular views of the Ben. 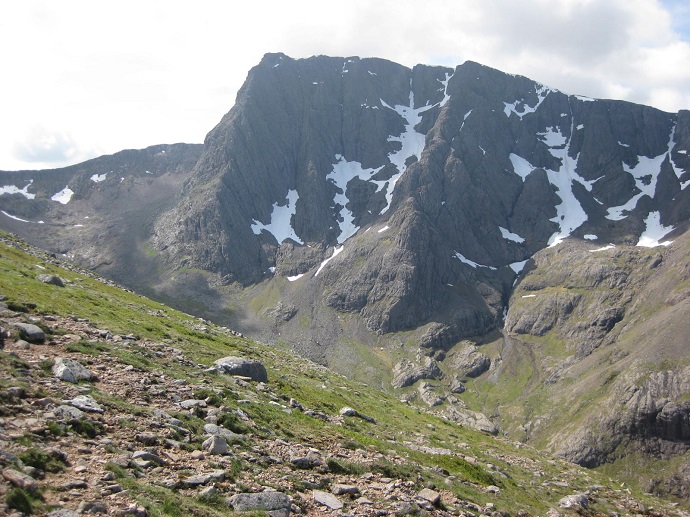 On reaching the ridge, a view opened up towards Aonach Beag. And the summit of Carn Mor Dearg was also looking rather fine. This is where the terrain became very rocky, and it stayed that way for the rest of the ascent and most of the way down. From the summit of CMD the way ahead appears dramatic, to say the least. At the start of the ridge, the first impression is a little daunting, but there is the consolation of a good view to the Mamores. To my surprise, the rocks were not too difficult to deal with, and the drops that looked scary from a distance did not seem so intimidating from the ridge itself. As you would expect, there were great views along the Allt a'Mhuilllin... and across to Aonach Beag... and south across the Mamores. The Ben now reared up impressively ahead. At the end of the ridge, there was a very distinctive cairn. There was also an excellent view back along the ridge. Did I really come along that? The steep, rocky climb to the top of the Ben was hard going, but did not last very long. If there is a path, I didn't find it, Quite suddenly, a small cairn appeared, and I was on the edge of the summit plateau gazing down at Binnein Mor. I had expected the summit area to be rather busy and messy, but I was surprised at how rocky it was. It was great to see and hear the snow buntings darting around and perching on rocks. The views from the edge of the plateau were also pretty good. It's not every day you get to look down on Sgurr a'Mhaim and Bidean mam Bian. The cliffs dropping down to the Allt a'Mhuillin were now seen from above. Across a patch of snow Carn Mor Dearg appeared, now glowing pink in the afternoon sunshine. The Mountain Path was rather bleak, but not unpleasant on a fine afternoon, and it is certainly a functional way to get off the mountain. There were plenty of people still on the way up, too. I'm always amazed at how many people undertake a walk of this sort on a warm day with just one small bottle of water and no rucksack.

Compared with the route up, the views on the way down were for the most part unspectacular. However, Stob Ban in the Mamores was magnificent. After leaving the Mountain Path and heading out above the Lochan Meall an t'Suidhe, the descent to the Allt a'Mhuillin was, as expected, rough and pathless, but not difficult in the dry conditions. Fording the river was also straightforward, although I dare say that this is not always the case. It also provided a fine view of the cliffs of the Ben in the late afternoon sun. The stroll along the path above the river and through the woods to the car park would be really good short walk in its own right and a convenient way of seeing the dramatic side of the Ben which is not visible from the Mountain Path. For me it was a pleasant end to a fantastic day in the hills. Great photos and description of the walk - having only done the Ben by the tourist path and been underwhelmed, I was surprised how different it was looking at it it's north face when I did the short walk up to the climbers hut last year. Just had a quick walk up there to break up a long drive though, still need to get back properly and do the CMD route!

Went up CMD last week for the full moon. Sat up there at midnight as the sun went down and the moon came up. Truly gobsmacking. Jen declared she would throw me off the arete if I headed towards Ben Nevis so we took a left down the ridge and spent a few hours Heather bashing down the Glen and back to the car park.

Loved every minute. Jen not so much. Excellent waterfall though. Surprised no path.

A great route. I never tire off it. Always something different. I was on the ben recently myself and next to no bogginess (if that's a word) on the descent after the dry spell.

We did the arete two weeks ago, on a hot day. I was gobsmacked. I want to do it again

We took 3 bottles of water each and we drank most of it. We met only a few walkers when on the arete, but as soon as we emerged on the summit of The Ben, it was all madness. People wearing all kinds of clothes and footwear. I saw a woman in winter hat and warm coat and a guy in shorts, boots and nothing else

I guess this is the nature of the tourist route on Nevis. You'll never walk alone

The snow buntings must be living up there permanently, we saw plenty of them on the summit of Nevis. They get very close to people, possibly looking for food. Here's one I managed to photograph: 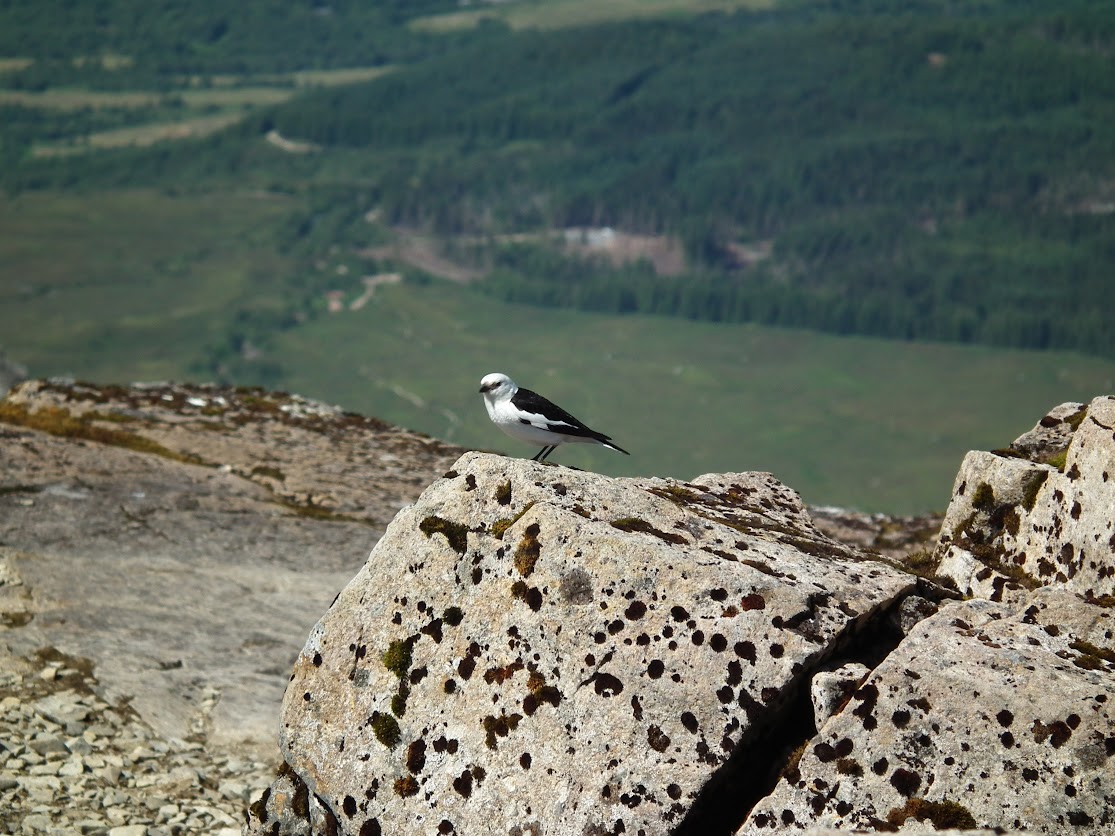