I cannot remember the last time I went along the road to Kinlochourn. Perhaps 1994, when I did Ladhar Bheinn. I remember next to nothing about it so it was as though I was visiting the area for the first time.

The exhibition was only a partial success due to injury, but it was good to bag another Corbett in clear weather, have a night out in the tent and to do a certain amount of reconnaissanse for my next trip to the area.

I rarely set of at the planned time and fine weather means a certain amount of stops to take photographs.... I arrived at Kinlochourn to find that there is a £2 charge for parking! The route started up the potholed road that I had driven down.... ....before heading up the stalker's path at the ruin.

The views improved as I gained height - Sgurr a' Mhaoraich from Sgurr Dubh.

Stitched panorama from The Saddle left to Loch Quoich right.

The Ben is easily recognisable on the right hand horizon.

The plan was to head down to the smooth green bealach and turn right down steep slopes. The triangulation pillar is a false friend as it does not mark the summit, which is about 500m NW and 3 metres higher, being marked by just a small cairn. The view from the true summit, looking across Loch Hourn towards The Saddle. 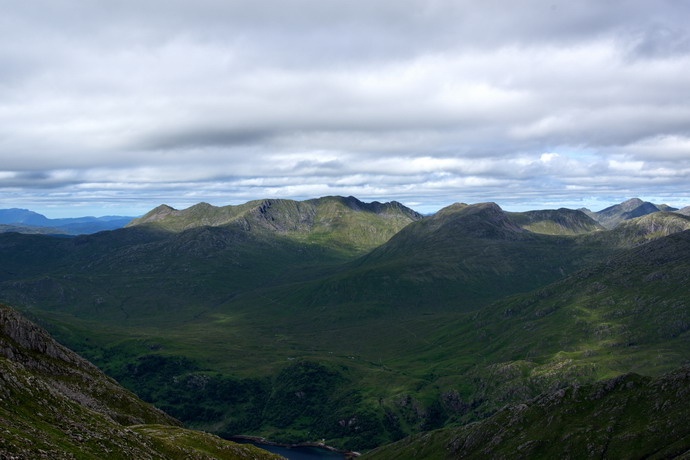 Looking across to Ladhar Bheinn. The Skye Cuillin covered in cloud to the right was an indication of the arrival of a weak front bringing drizzly rain. Looking from the true summit across to the East top. Sgurr Mor is the nearby peak seen to the right of The Ben. 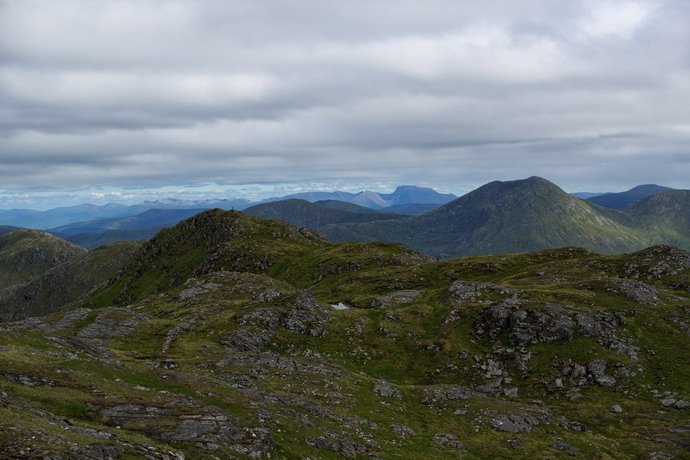 So where did everything go wrong? I retraced my steps back to the trig point of the East Top and dropping down from there, my foot landed badly on a tussock of grass sending me into a forward somersault and left lying on the ground in pain

. I thought about abandoning the adventure and heading north to try and regain the stalkers path used for the ascent, but I optimistically thought that if I pushed on, the pain may wear off and after a night's rest would be sufficiently recovered to continue with my original plan. The descent down the steep SW slopes was slow and painful. At times, I resembled a three legged crab as I tried to lower myself down the steeper sections.

Eventually, I reached Lochan an Lagain Aintheich. Slat Bheinn looked formidable in the mist and the drizzle had become persistent, so I set up camp. Setting up the tent first, I set about making a hot drink and cooking a meal which was consumed within the shelter of the tent. Washing out my mug, it struck me how warm the water in the lochan was. The stones at the bottom had been absorbing heat from the sun all day and continued to warm the water. Though wet, it was still warm and I had to push my sleeping bag down towards my waist to prevent overheating. The ankle was no better in the morning....Neither was the weather! I decided to head down the path into Glen Barrisdale, to the bothy for lunch and continue along the path back to Kinlochourn. I could not remember much about Barrisdale from the early nineties. I just remembered a Kiwi shepherd who seemed totally unbothered by the midges, even with his sleeves rolled up. I must have seemed rather pathetic to him in my midge net and all parts covered. 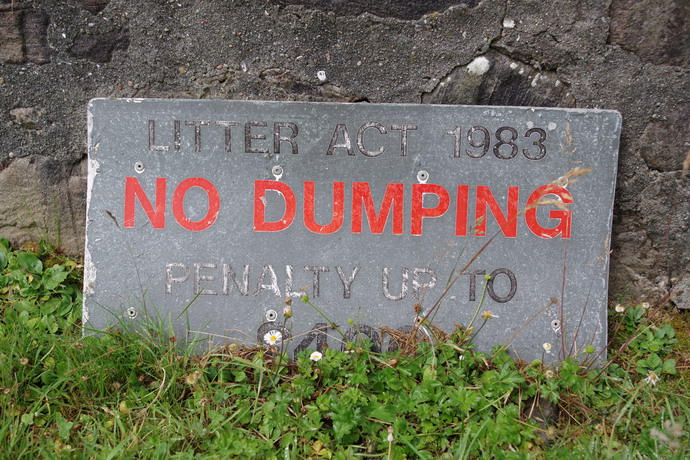 There were a couple of workers at Barrisdale, but I did not recognise the Kiwi. Maybe the midges consumed him like piranhas, just leaving the bones! Two men with their teenage boys arrived. They had walked in from Kinlochourn and were continuing to Inverie via Mam Barrisdale. One of the gentlemen asked if I was alright walking out back to the car. I told him that I had managed thus far and the "track" out would be relatively easy.

From where did I get the idea that there was a track?

I have done so many hills over so many years that the memories have become a very mixed-up collage. While it is a beautiful walk, the Braaisdale to Kinlochourn is by no means an easy stroll....but I made it and lived to write the walk report!

Seen on the path out - magpie moth Abraxas grossulariata ​- I tried to move it to a position for a better photo but without success. 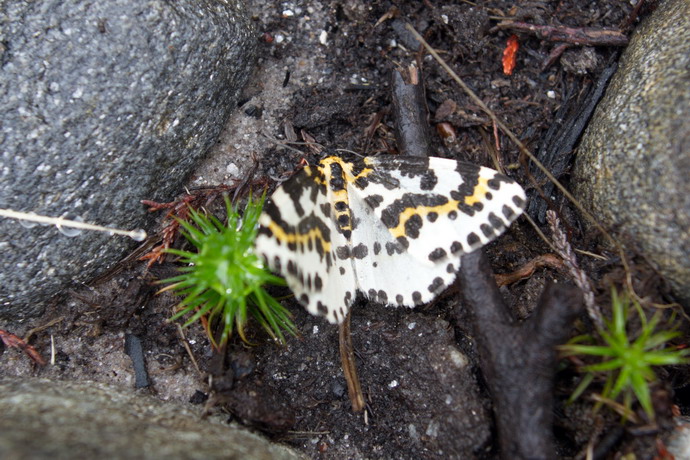 The path as it nears Kinlochourn. My best man tells me that he was there during high tide and the waves flooded the path and he had to walk, balanced, along the retaining wall at he end of a long day, picking out his foot placements in the moonlight. I think he remembers the path rather well! No delusions about it being an easy track! I am now left with unfinished business in the area, the Graham Slat Bheinn and the Corbett, Sgurr a'Choire-bheithe. Looking at the Kinlochourn website "From Monday to Friday, Peter Fletcher at Arnisdale runs a boat service. He collects and delivers to various points around Loch Hourn and can be contacted on 01599 235007. This gives you an option of walking back to Barrisdale and then taking the boat to Kinlochourn. It's hoped next year that we will have some kayaks". Either option may be worth considering next time! Anyone out there wanting to share the cost of the boat? Anyone knows how much it costs?

Aaaargh for the foot. Hope it is on the mend. Those Knoydart Corbetts and Grahams seem to arrive towards the end of a lot of folk's lists. Slat Bheinn was in the last 20 of Grahams for us. I don't begrudge paying for parking at Kinloch hourn. After all, ordinary car tourists call in at his cafe, and help fund the place for walkers, and they need somewhere to park. Why don't you just phone and ask how much the boat costs? Then you will have up to date info.. For Slat Bheinn we said we would hire the letting bothy next to the public bothy if they could arrange for us to be ferried in, which the ghillie did...to his surprise. "I'm not insured you know." We had 4 days of fairly appalling weather.

That's quite a route especially with a sore ankle/foot. Hope it's getting better. Great hill for views. Would agree with Squiz about the parking - I often keep certain tickets as mementos as well

At the risk of stirring up a hornet's nest, I see mention in some other reports about parking charges but often these seem relatively low in comparison with the cost of petrol/diesel to get to/from the hills which is generally not mentioned - cheers

Hi Yorjick,
I used Peter's boat service from Arnisdale to Barrisdale nearly three years ago and found it excellent. He's very friendly and informative as regards local history which makes for an interesting crossing. He'll drop you off and pick you up pretty much when you want. Cost was £60 (return) for up to four persons....

macpee wrote:Hi Yorjick,
I used Peter's boat service from Arnisdale to Barrisdale nearly three years ago and found it excellent. He's very friendly and informative as regards local history which makes for an interesting crossing. He'll drop you off and pick you up pretty much when you want. Cost was £60 (return) for up to four persons....

Thank you for the information macpee! I will probably try to organise a small group of three or four to make it worthwhile.

With regards to parking, I paid the £2 though I did not "register" for overnight parking. I agree with everyone's comments on the matter, but I have a few reservations. Firstly, presumably the road was built using public funds - was the car park produced as part of the road, in which I would question the legality of charging people to park there. Perhaps, the estate developed the site? Secondly, I would not want this to set a precedent for other places with increasing prices. Thirdly, is the income being declared to the taxman? I suspect not. It is semi-voluntary, as I assume that non-payers are not clamped(!?) and it is a very modest sum.

I remember on my previous trip to Barrisdale, in the mid-nineties, I had a chat with the shepherd, who expressed his objections to people wild camping, with particular reference to his dogs sniffing human excrement. As a responsible wild camper, any comments that hint at restricting open access, including wild camping, jar with my own values and beliefs. He was a very nice chap and I enjoyed our chat, but any restrictions or requirements regarding overnight parking or wild camping, without any legal basis, I personally find totally disagreeable.