A Braw Day in Arrochar Alps

A Braw Day in Arrochar Alps


I had been eyeing up these two for a while and finally the perfect day arrived to tackle them.
The initial part of the ascent was gruelling due to the intense heat. It was a scorching day and the sun felt very oppressive. As we climbed and the temperature dropped it became a bit easier. The route up the side of Ben Narnain was great fun. My spirits dropped a little when we reached the top of a false summit and saw the bulk of Narnain rising in the distance...I was obviously far too optimistic about the progress we had made!! Realising we still had a long way to go...

We munched some Morale Skittles and plugged on and the final part wasn't as daunting as we thought. We had a fun wee scramble up the final leg. We popped up at the summit and a rather surprised man was there to welcome us. He asked us from which direction we had climbed and when we explained he informed us we had taken the harder route...I thought it was the easier one! Regardless, it was definitely the funner option (I'm looking at you, zig zags...) A snack and a rest at the top and we begun the descent down the back of Narnain which was uneventful. Then begun our trek up Beinn Ime. My friend became very dispirited halfway up and was considering calling it a day, sitting down and waiting for me to come back once reaching the summit. With lots of encouragement and Skittles, she persevered and we made it to the summit together! Hurray! We both enjoyed some well deserved pieces at the top and enjoyed the fantastic views.
The walk back to the car was long but pleasant, however the zigzags seemed to go on forever. I'm glad we avoided them on the way up!
A braw walk on a braw day, I really enjoyed climbing these two. Probably my favourite so far. 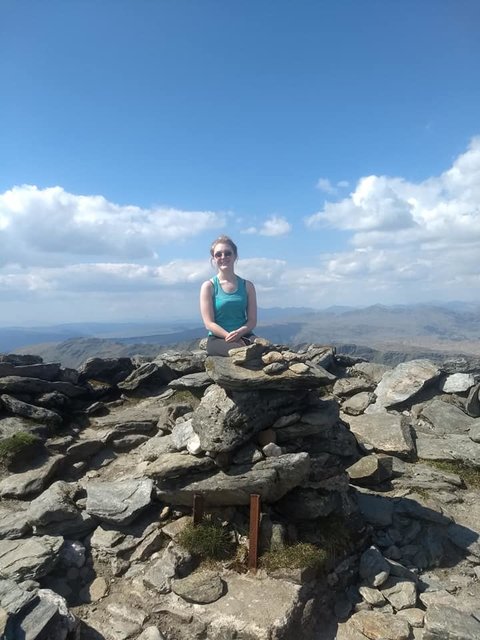