A tot of Rum to warm the cockles of the heart

A tot of Rum to warm the cockles of the heart


I’d never been to Rum before this day so was looking forward to it and had been holding off for good weather. Having looked at various options, I decided against the circuit down via Dibidil opting instead for the out/back route. However, I wasn’t sure that I’d manage it between ferries on the Saturday and didn’t really want to rush it. Therefore, the plan was to get the 0730 ferry from Mallaig to Rum, camp overnight then get the ferry from Rum to Canna to Mallaig on the Sunday morning arriving in Mallaig at 1400hrs – didn’t quite work out that way in the end though.

Drove up on the Friday night. Saturday morning, got a parking space in the car park just before the ferry terminal and was in plenty of time for the 0730 ferry to Rum. Calm conditions and nice trip across. 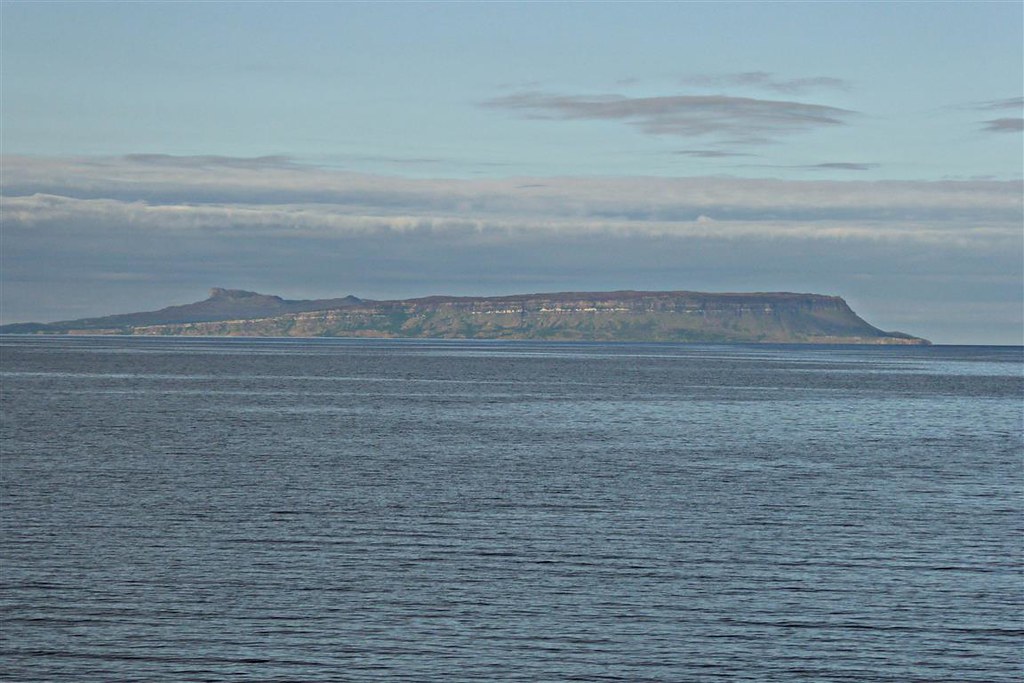 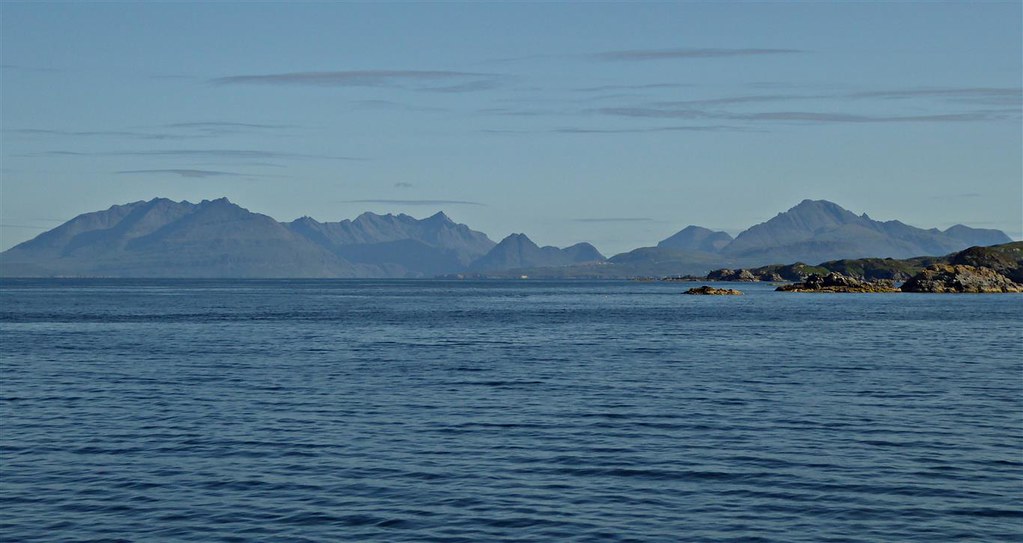 Rum ahead - wasn’t up for any Titanic posing 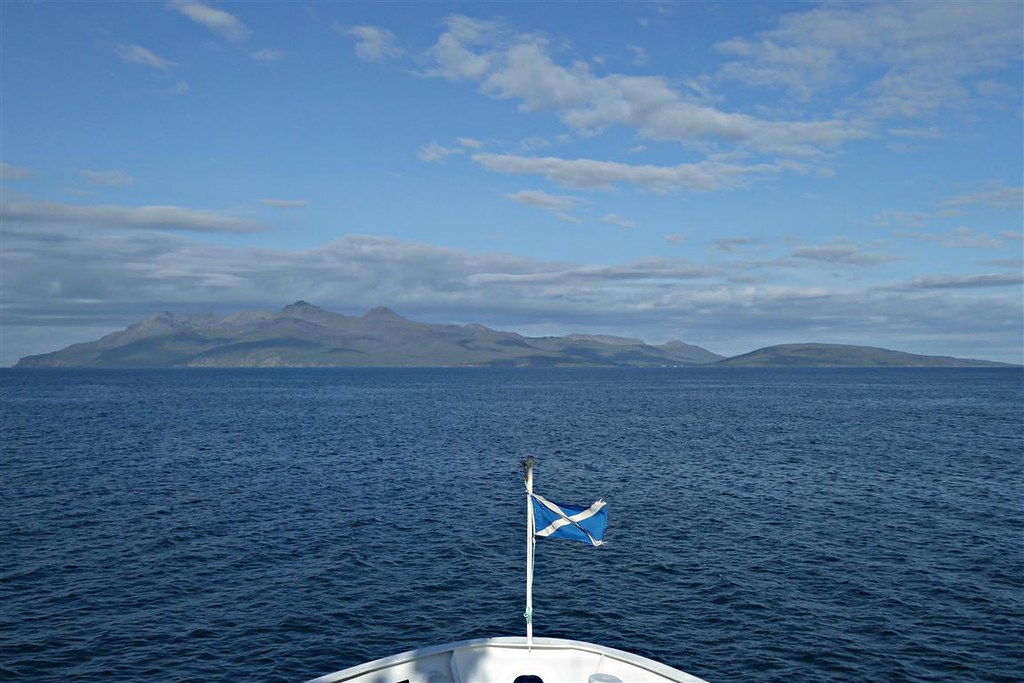 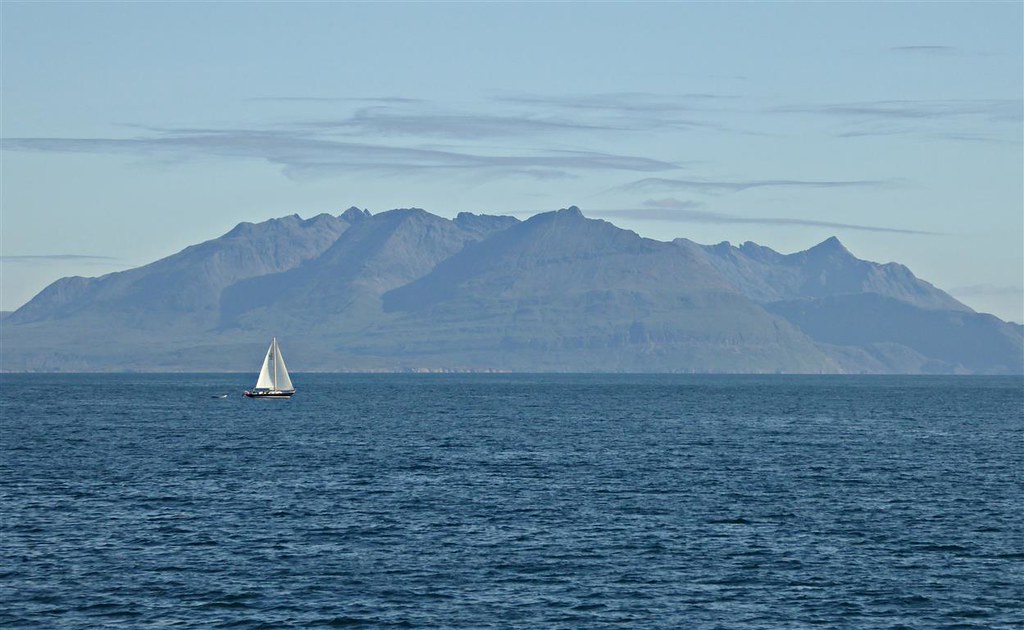 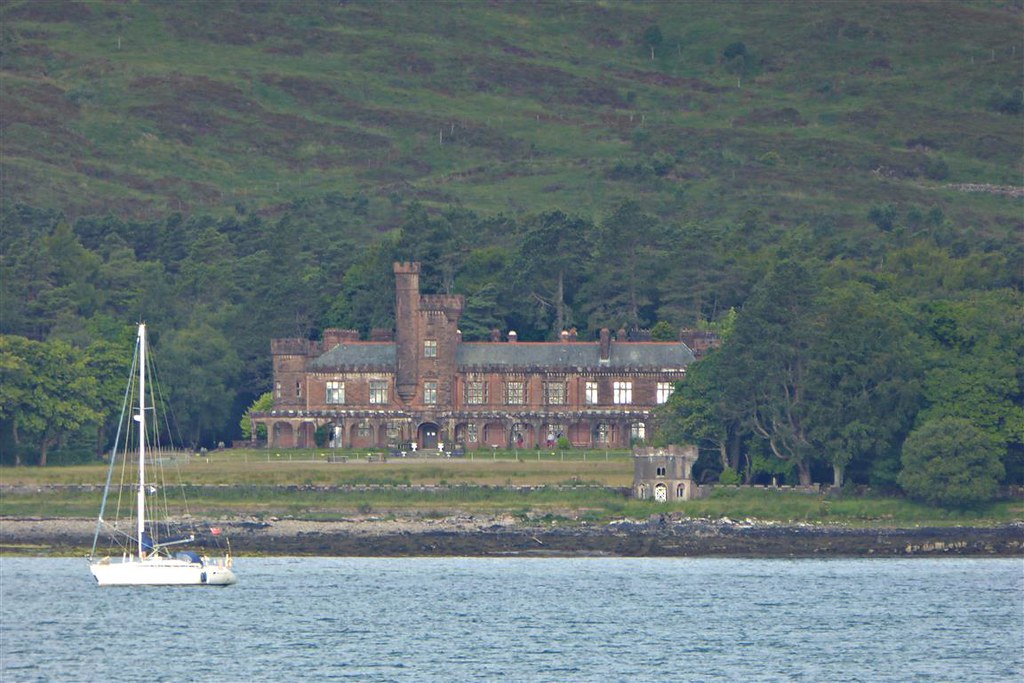 I was off the ferry at about 0900 then walked to the campsite. Was carrying my tent and camping stuff in a separate holdall rather than bring a larger rucksack. Had never used a campsite before – new experience. Found a spot close to the shore, erected the tent and left the overnight gear inside. Then went back to bunkhouse to pay the £6 overnight charge. There are envelopes in the bunkhouse for this purpose – write details of number of people and nights on the envelope, money in the envelope and post it in the honesty box on the outside wall. Had a quick chat with the guy at the desk inside.

Set off from the campsite at about 0930 heading for Kinloch. Walked past the castle to the river, left along the road beside the river then took the track southwards which heads towards the powerhouse and hills. 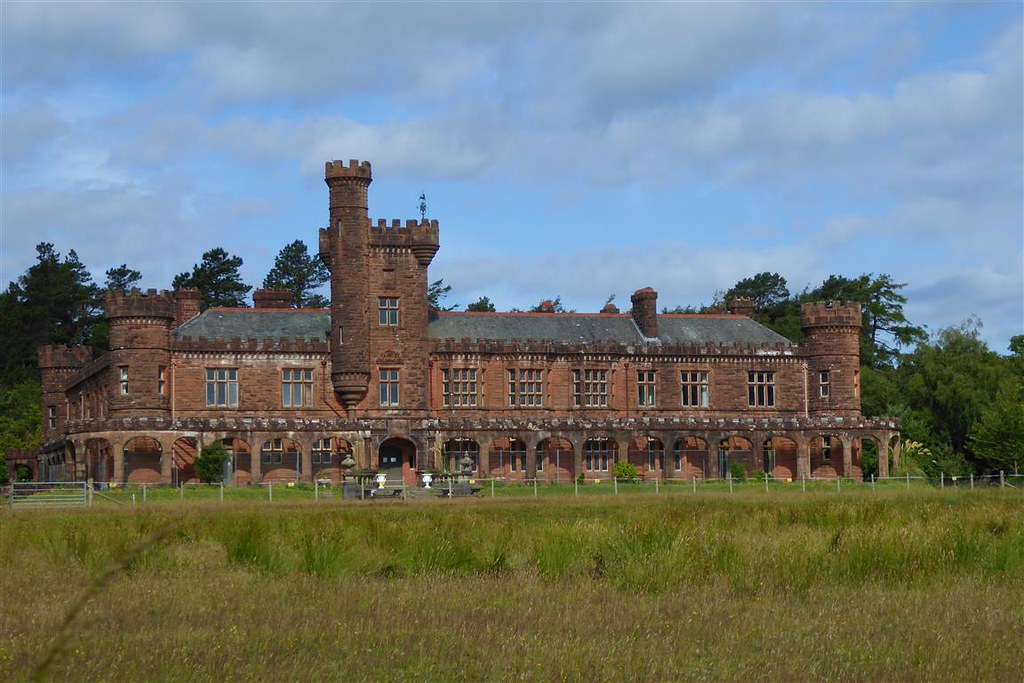 Good path which I followed southwards towards Hallival 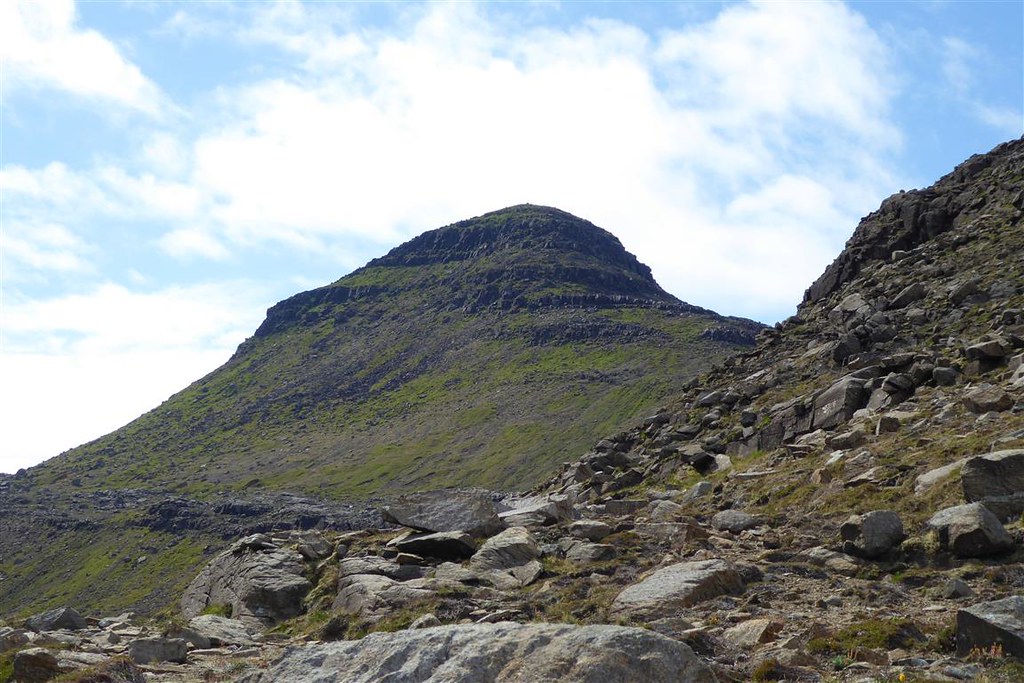 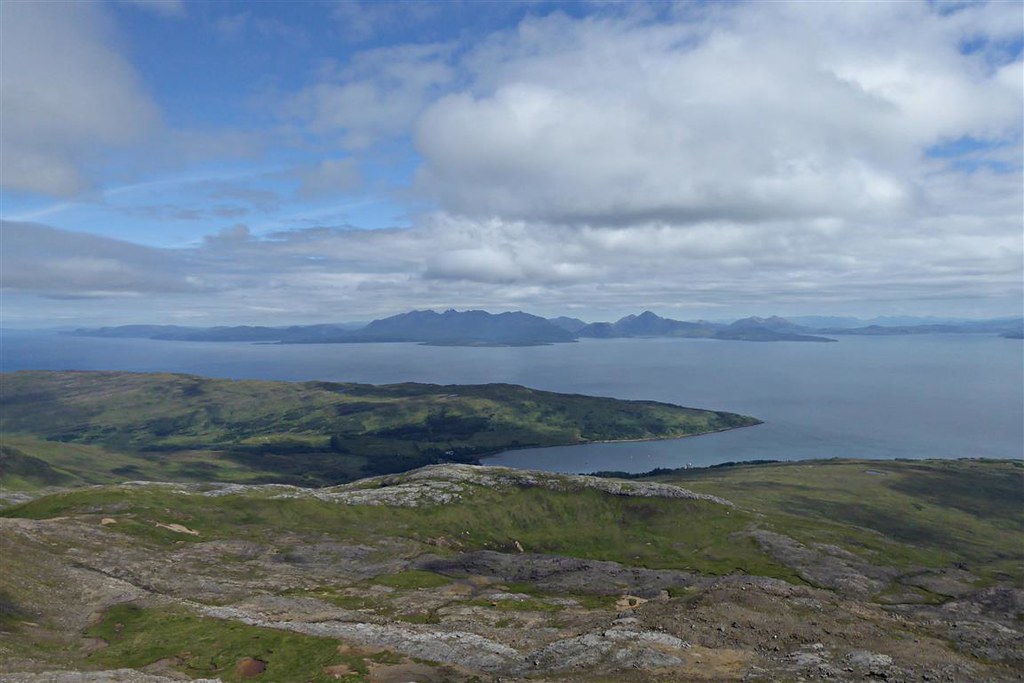 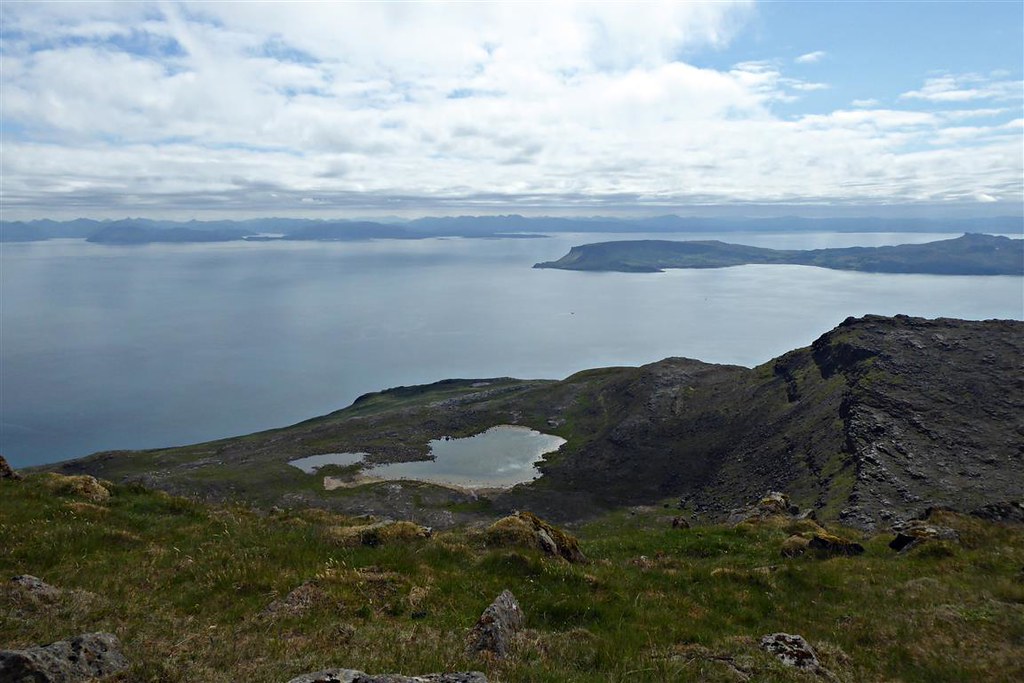 Then down to the 599m before the final ascent to Askival.

Going up Askival, it did look a bit intimidating from further back but, as is often the case, more straightforward at closer range. 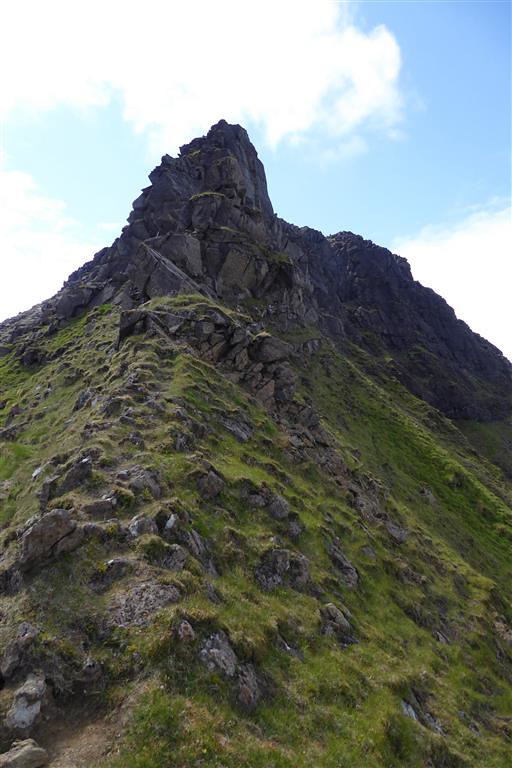 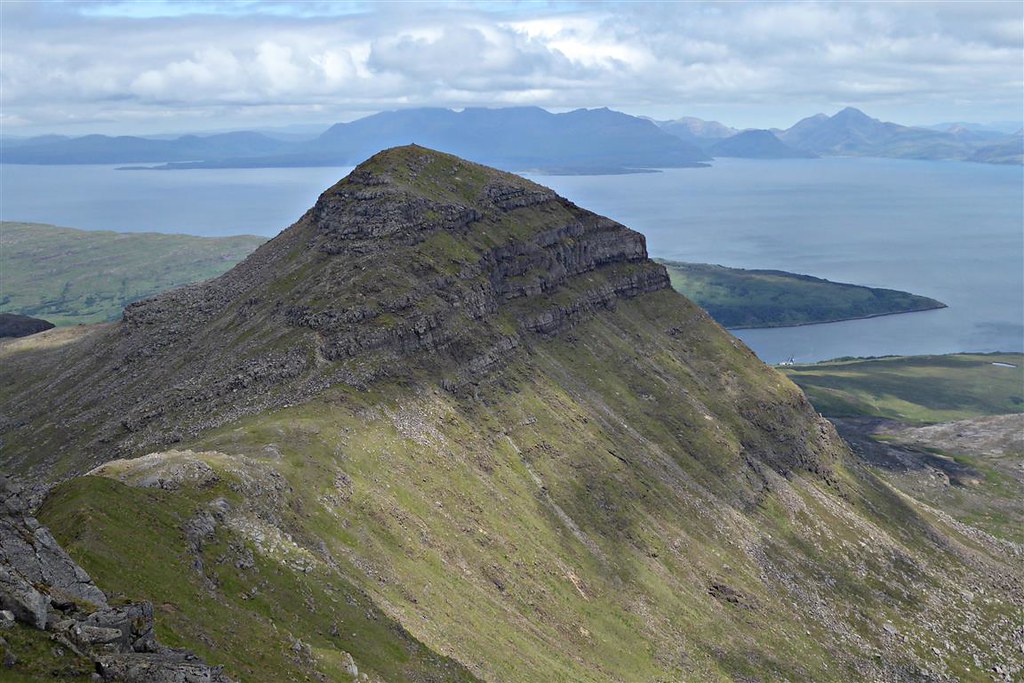 Got to the top of Askival just before some younger males caught up. They were discussing having to get back for the ferry and, with some cloud in the distance blowing in, opted to return. 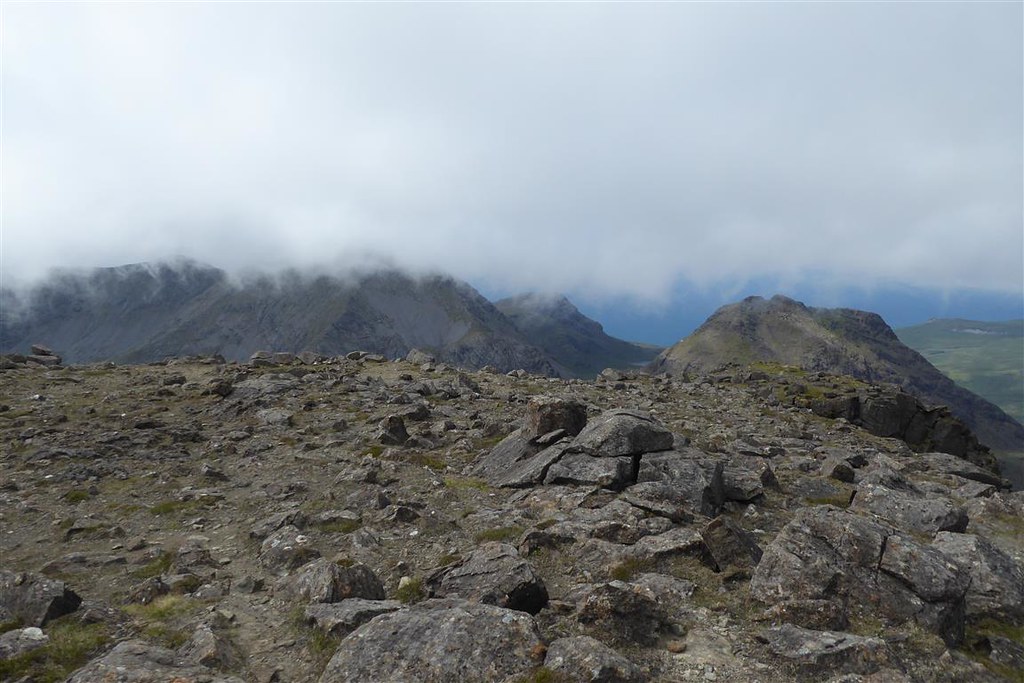 Found it a bit tricky descending Askival with a bit of toing and froing to find the best line. Eventually got down to the bealach looking down Glen Dibidil. 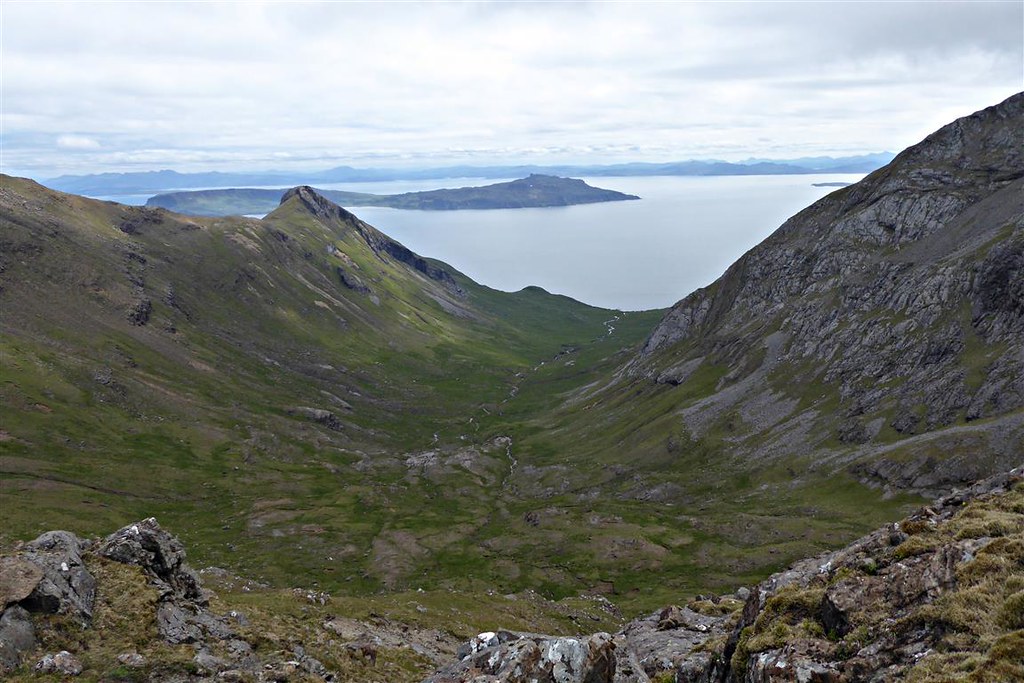 Picked up the path and headed towards the lower reaches of Trollabhal before branching off steeply upwards; a bit of scrambling required further up. I could see a group of walkers ahead of me and caught up with them when they were stopping for a break before the final scramble over to the summit. 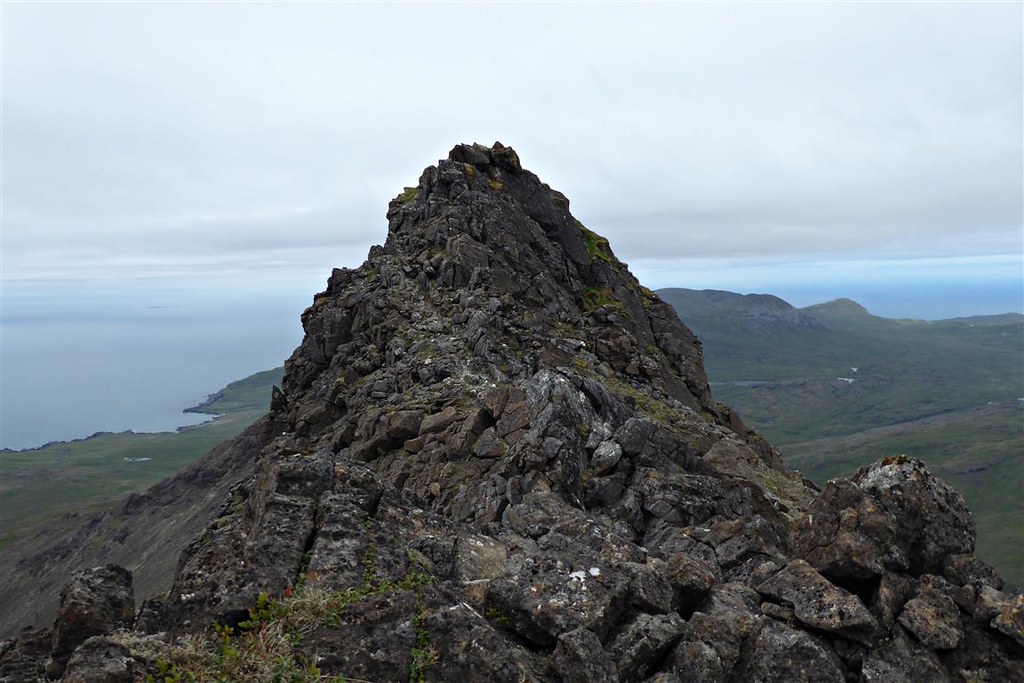 Got to the summit and took a few photos before they all appeared led by a guide – subsequently discovered that he was with Steven Fallon’s group as I found his blog of their trip online. 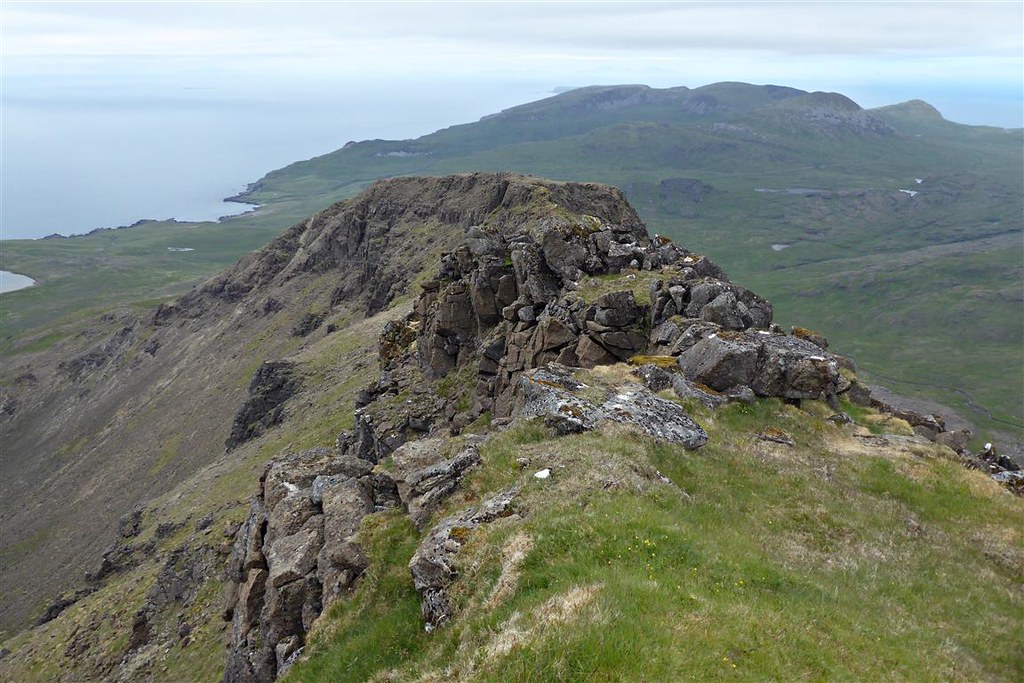 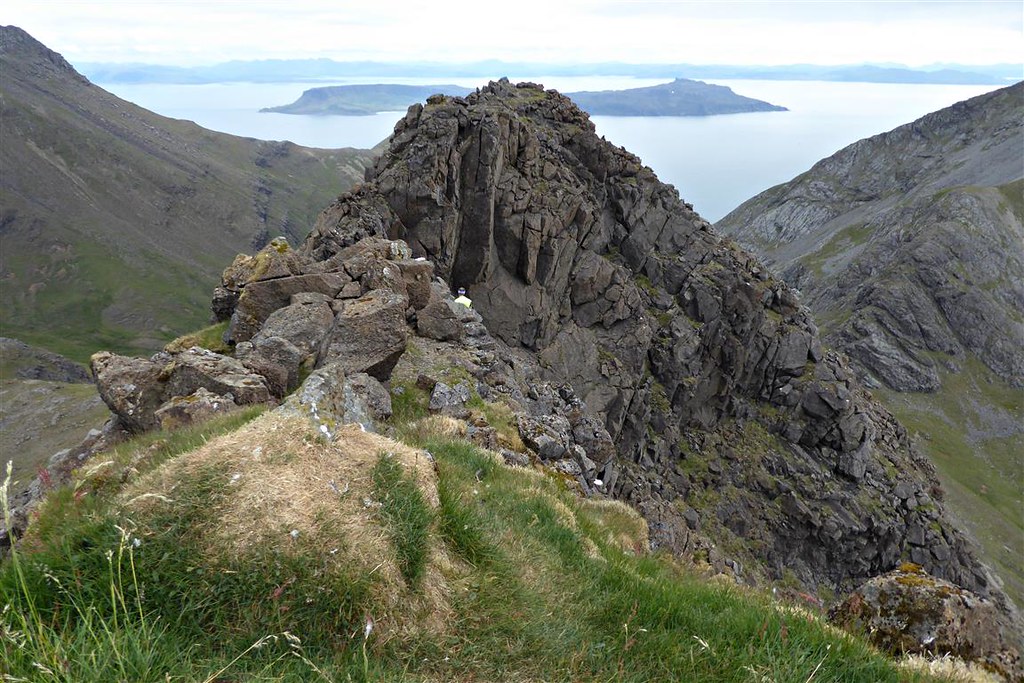 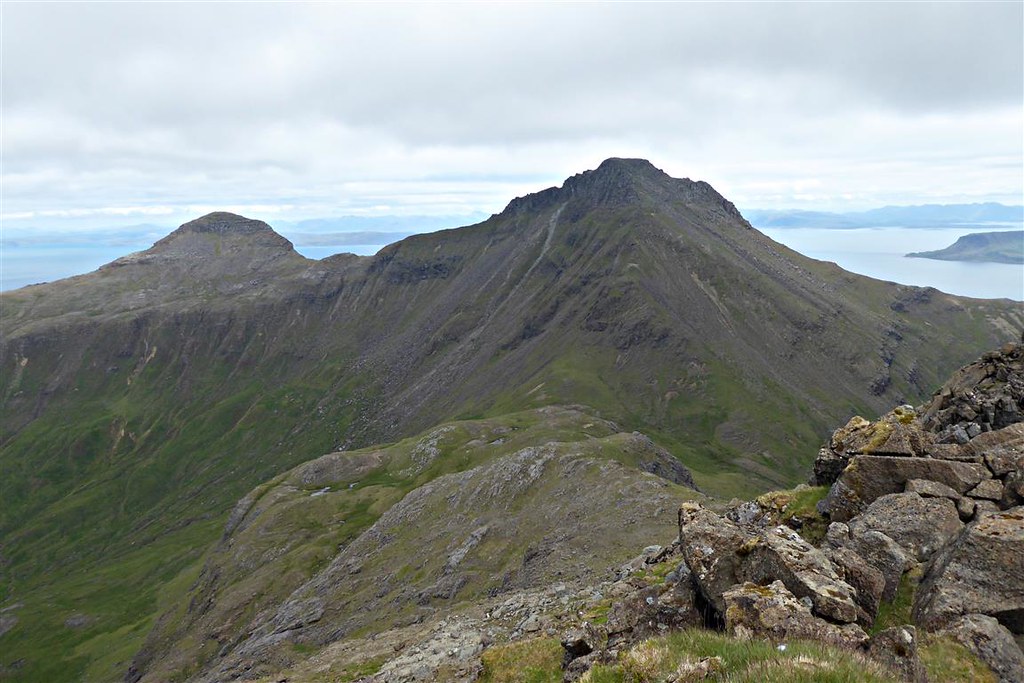 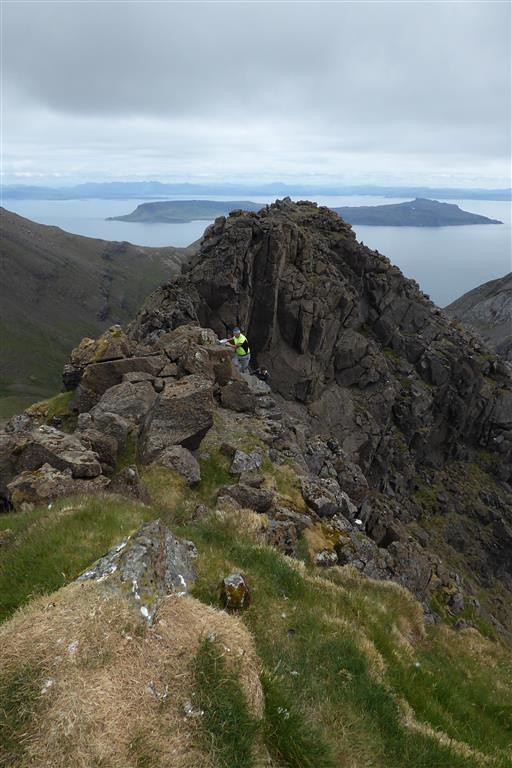 I then set off downwards to find a route towards Ainshval. 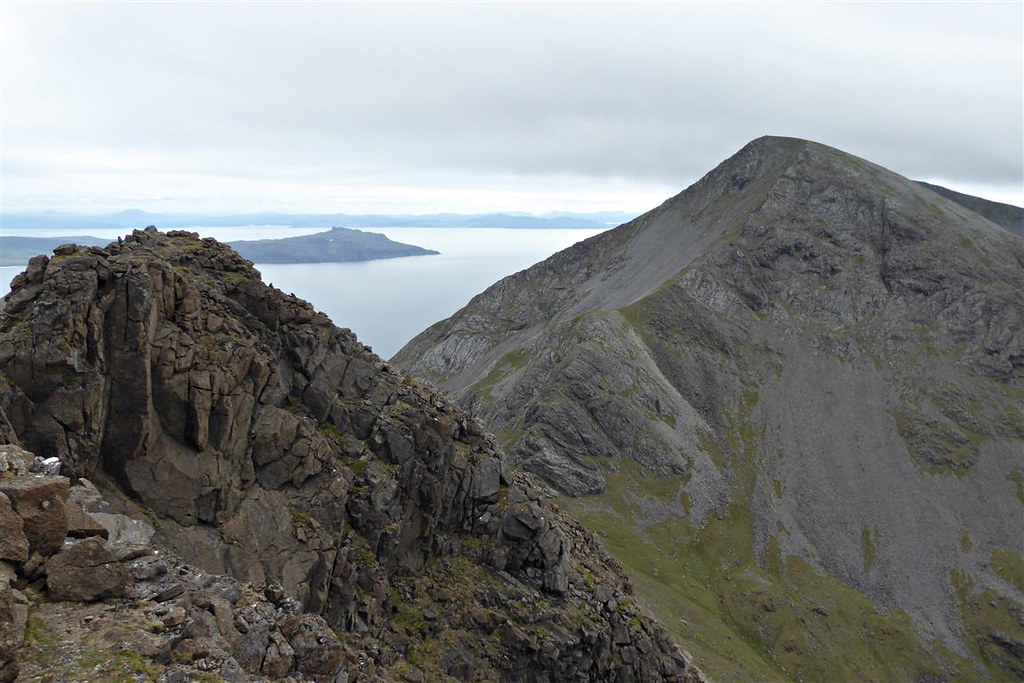 I wanted to keep ahead of the group so that it didn’t look as though I was hanging on with them. Problem was that the route down wasn’t that obvious. Tried one way but didn’t like where it was going so went back up a little then over and down. By that time the guide was nearly catching up with me with the group s bit behind; he said that the way I tried was also the way he’d tried the first time and that if I’d continued down he’d have shouted after me. Good job I stopped going any further.

Fairly straightforward from there down to the bealach albeit over a fair bit of scree and loose rock. 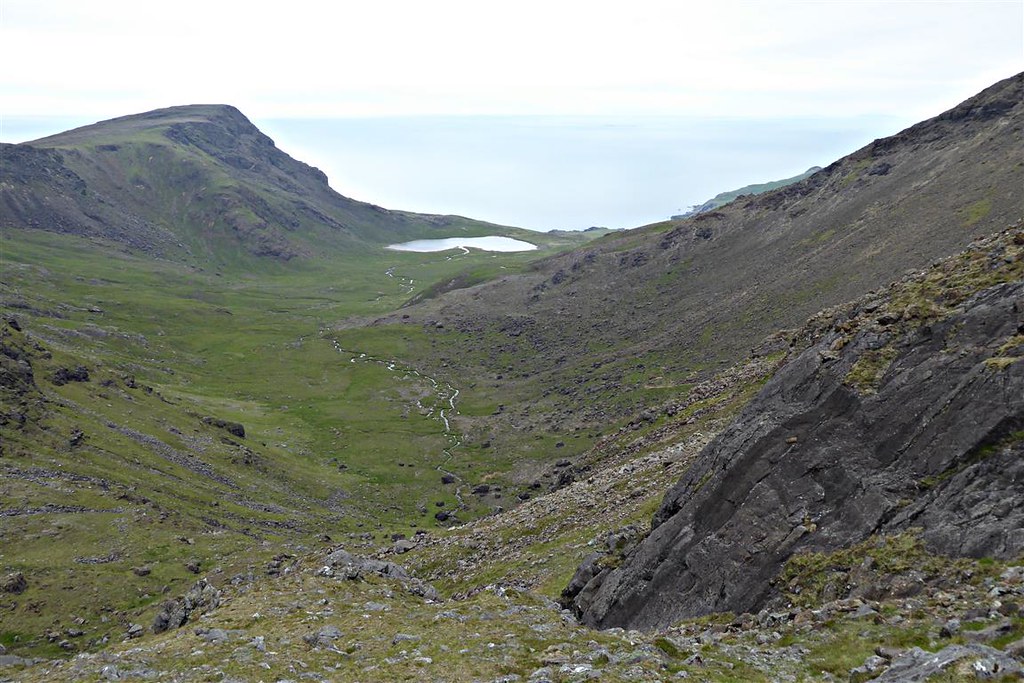 Then up Ainshval. Again it looks imposing but it’s actually OK. Skirted round to the right of the rock to the left of the middle of the photo then found a sort of zigzag path up through the scree. 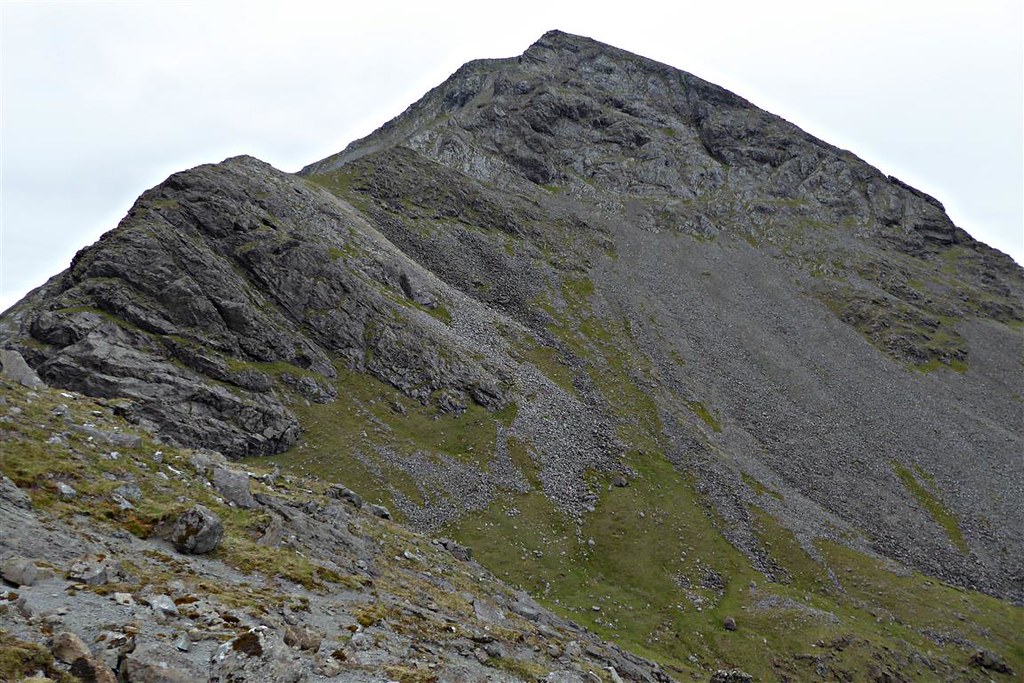 Looking back you can just see the party of walkers at the foot of Trollabhal. 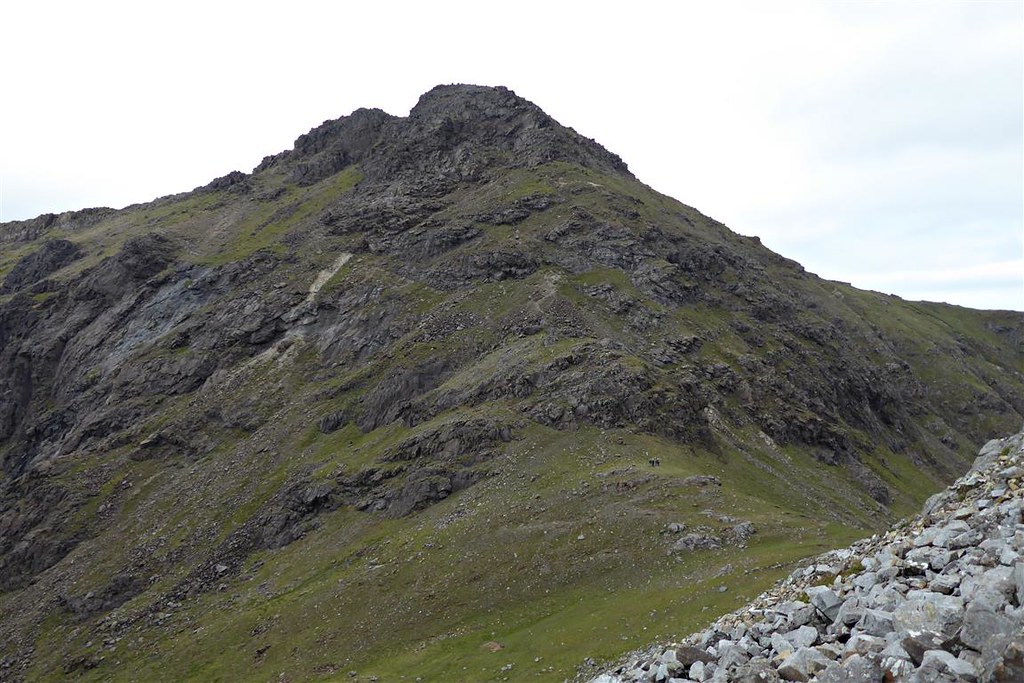 Once past the scree there’s a path here and there which gets you to the summit. 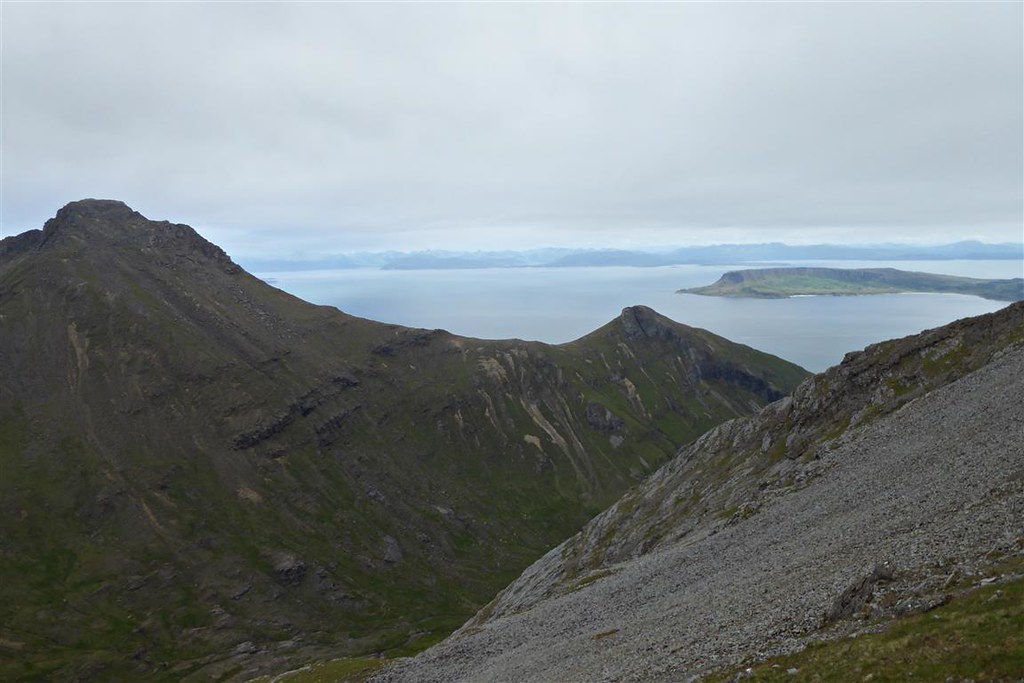 Low cloud at the top. Light rain had also started falling at times so little in the way of views unfortunately and I was starting to find it a bit chilly. 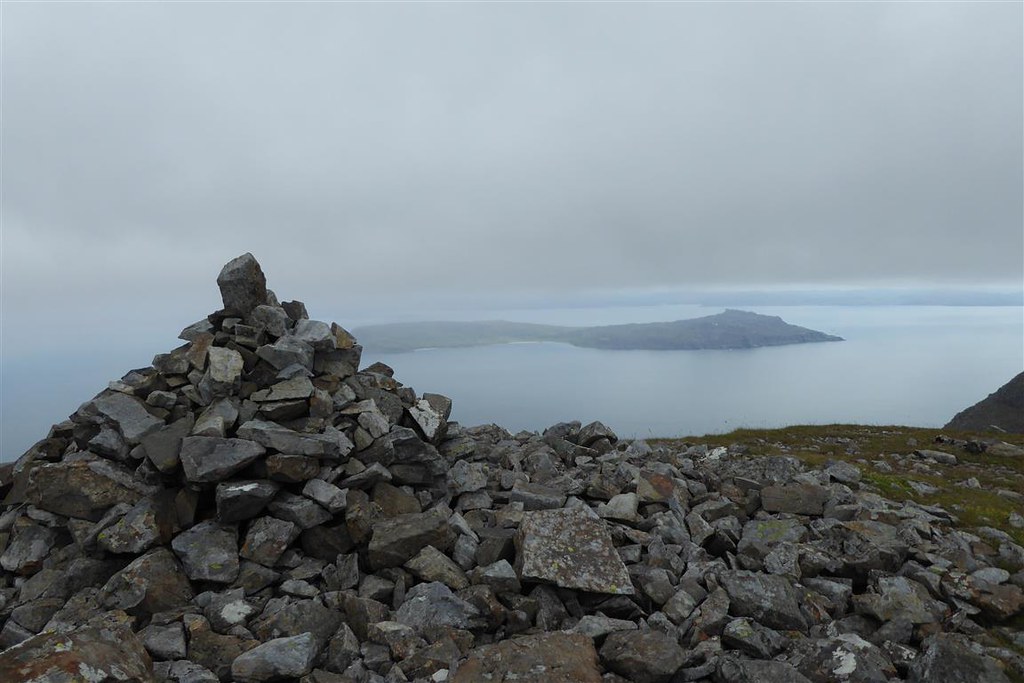 Retraced my steps back down to the bealach meeting the group of walkers on the way – they were going over Sgurr nan Gilean to get back to their tents at Harris on the west of the island.

Selfie at the bealach

Picked up a path which followed the contour line between the two bealachs. Once back at Bealach an Oir, I then contoured to the north under Hallival and found a very faint path for part of the way. 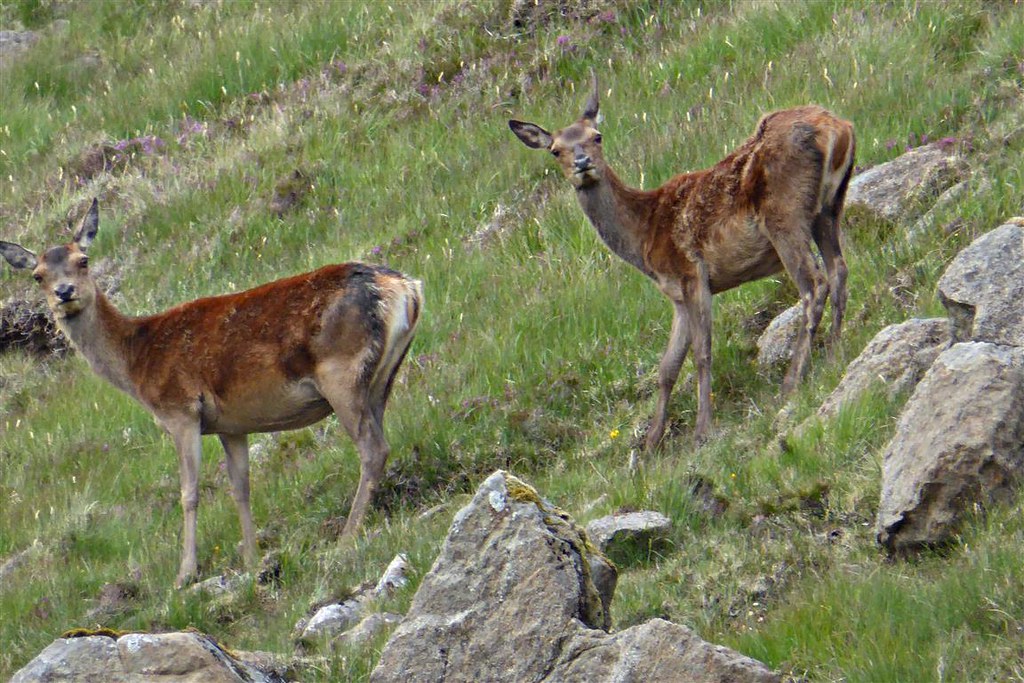 A little reascent back up to Bealach Bairc-mheall then south to rejoin the outward path. Drizzly, light rain for part of the way back - returned the same way as on the outward route.

Got back to the campsite at just on 1730hrs so it had taken a couple of minutes more than 8 hours, somewhat less than I had been expecting. Cooked some dinner and packed the tent away. Still some light drizzly rain but no wind now to keep the midges away.

View from near campsite 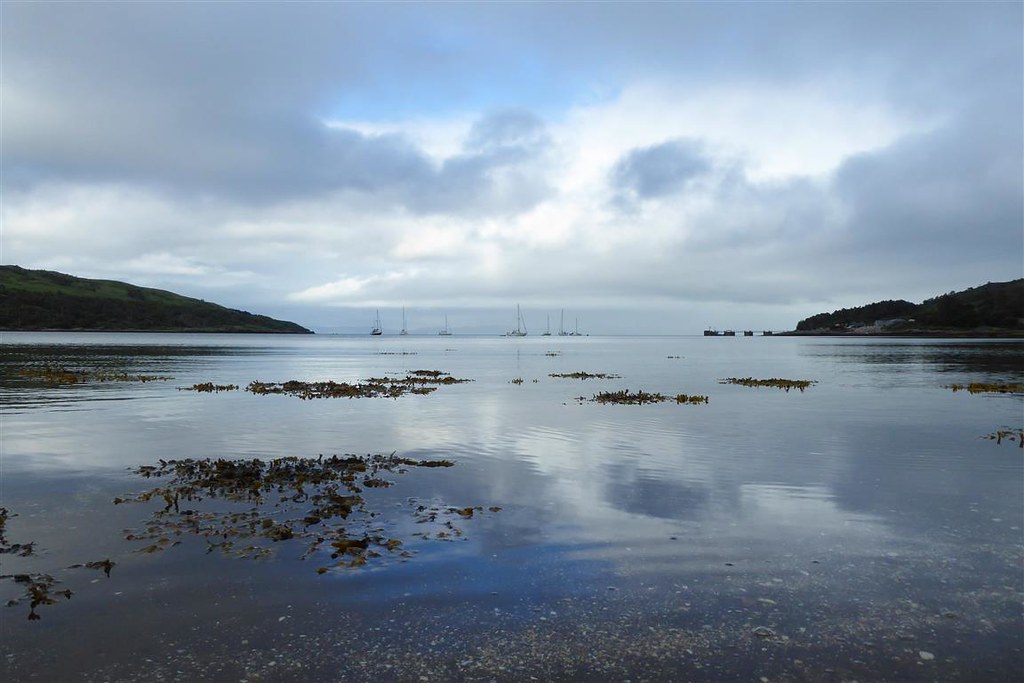 Headed back along the track to the ferry jetty and a long wait for the ferry back. Wandered around a bit before having to go under cover as the rain got a little heavier. 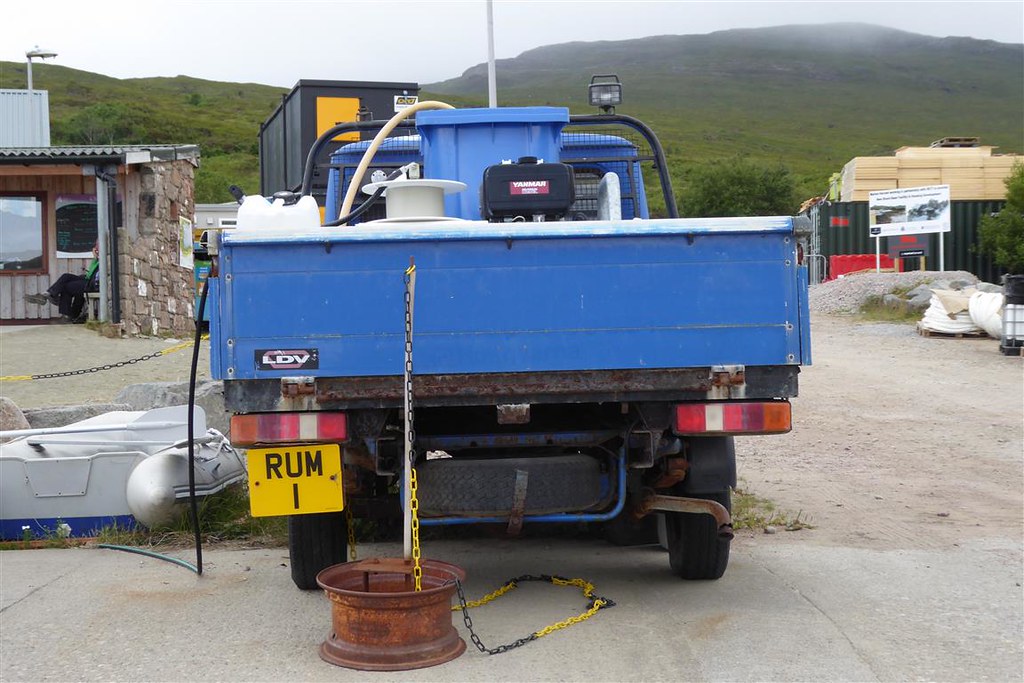 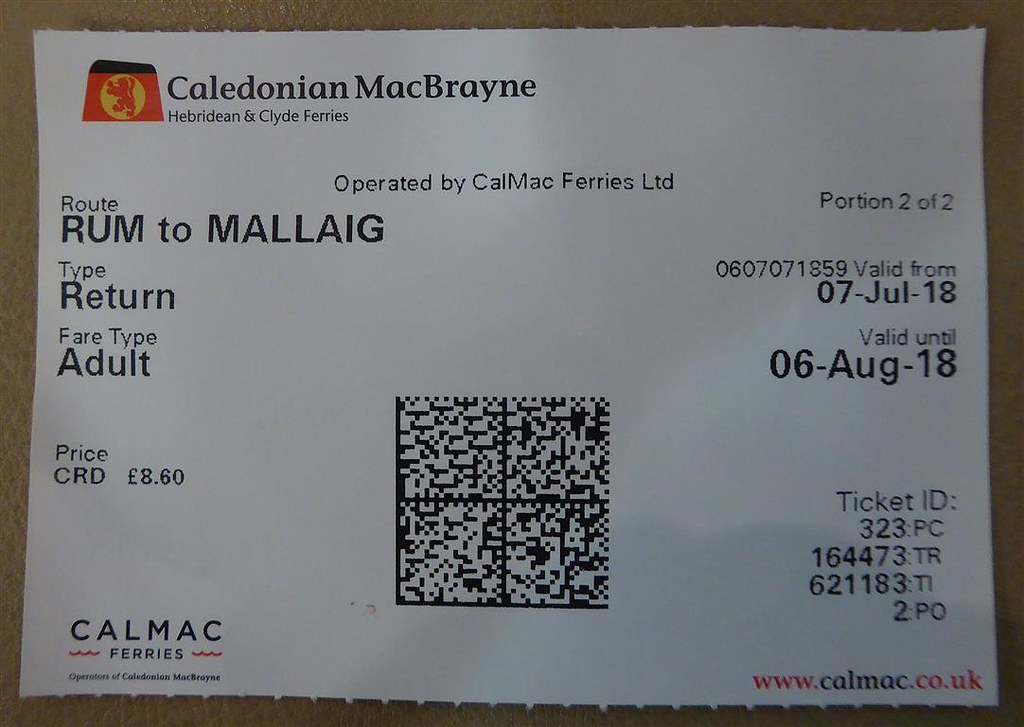 Back at Mallaig around 2100hrs then drove back home to Glasgow. Would’ve like to have stayed over in Rum but little point given the change in weather – thinking that it would be good to go back some time and explore a bit more.

Good stuff. Our croft on Eigg looks over to the Dibidil and Rum and have spent decades looking over, but as yet have not been on the Rum Corbetts as yet.

What time was your return ferry ?

Wonderful RH! Rum is one I would very much like to keep off for good weather as well, especially as it is seemingly more prone to rain than anywhere else

Hadn't before understood the narrowness of the ridges there - makes it all the more tempting.

You mostly got your weather window and some good photos there. You didn't consider returning along the coast?

Interesting question - my original intention was to to do the loop and camp near Dibidil or use the bothy. However, when looking at the route and hills, I didn't fancy carrying a camping pack the whole way which is when I opted for the out/back route. In hindsight, I'd probably have had time to return along the coast - maybe next time - cheers

Great stuff, and a real stimulus to getting out there. The scrambling aspects make the ridge particularly appealing.

As you say, it looks like a place one could profitably spend a few days (if the weather was decent!) - I've been to Rum once, for a week, and the cloud remained around 100m level for the entire time!

You got a good day for it too, no blue sky but excellent visibility, the Rum Cuillin looks like a brilliant walk and Rum a great place to visit and explore, thanks for sharing!

Given both your recent exploits, you'd find the scrambling on this Rum route a dawdle ! - cheers

One of the best Rum reports, stunning pics.