Sometimes an outing exceeds all my expectations – this was one of those trips, for a couple of reasons.

Whilst easily achievable as a day walk, after the long winter I opted to split this into an overnighter and get the summer tent out again. With the weather promising on the Saturday but so much on the Sunday, the plan was to get the majority of the walk completed on Saturday.

The view from the start 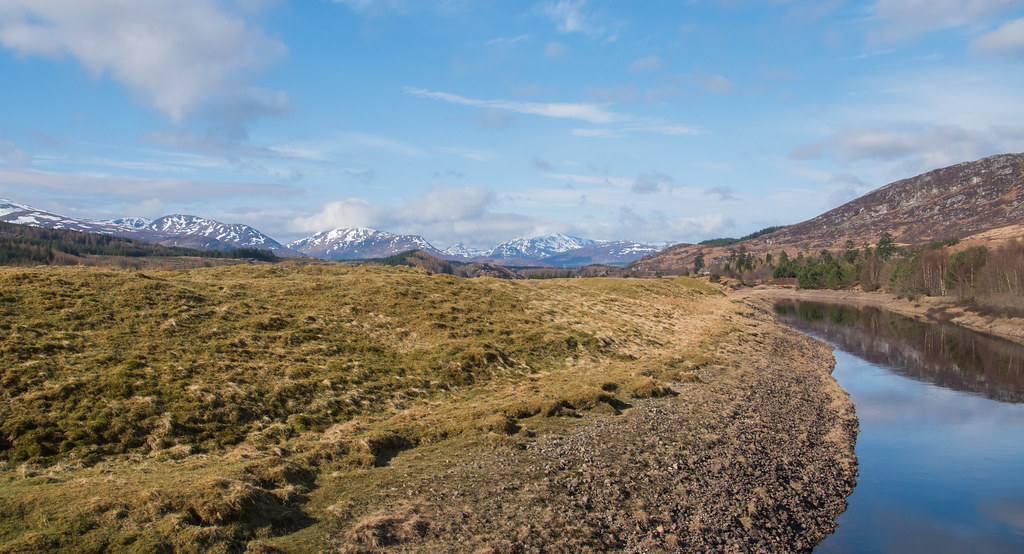 On route to Lochan na h-Earba 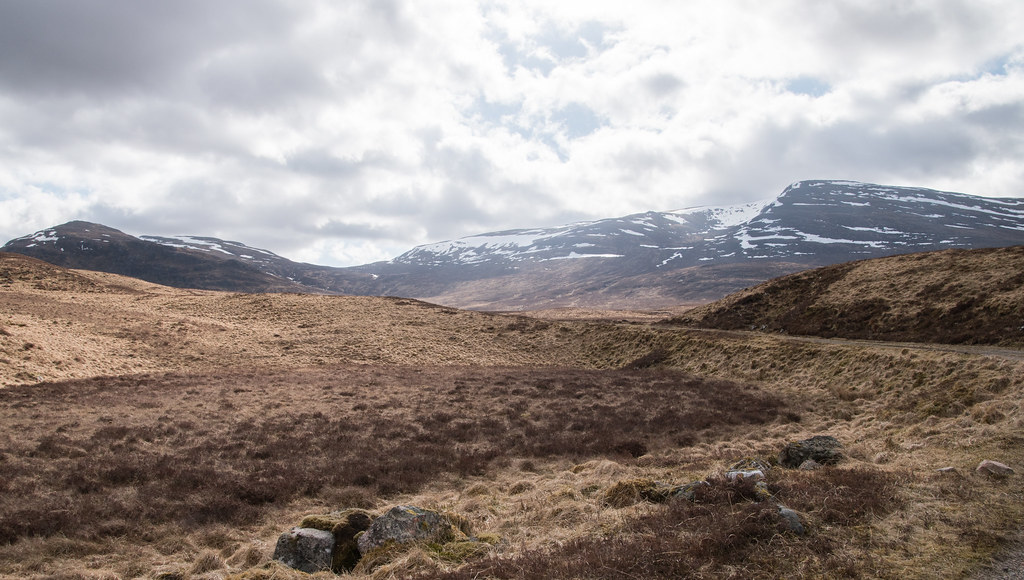 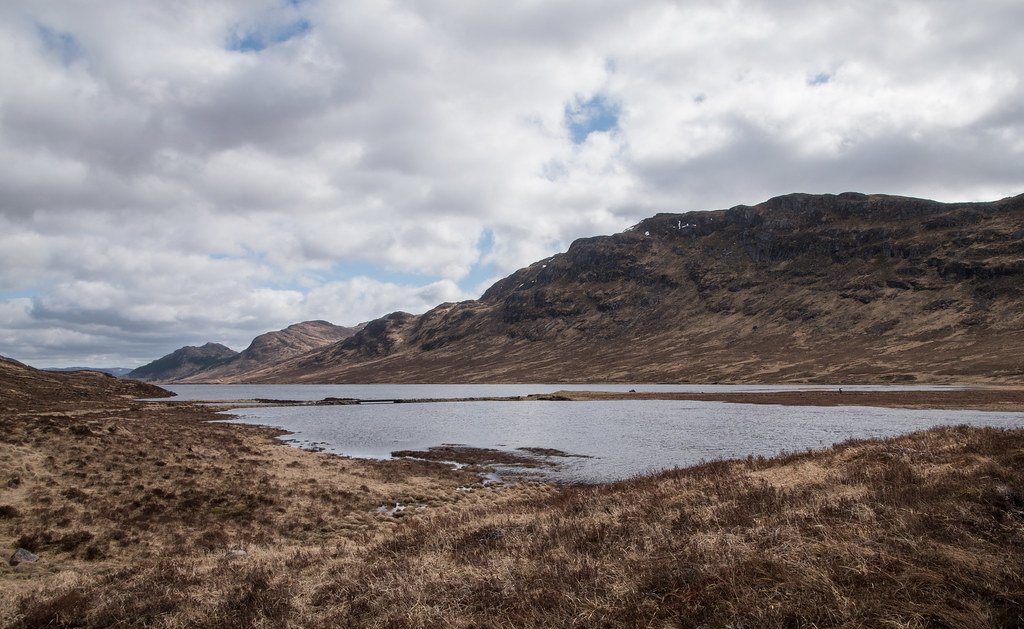 I was already contemplating where I was going to pitch my tent; unfortunately there was currently a tent where I had originally planned (see above photo).

Assuming / hoping that the tents residents were out in the hills and would be packed up for my return I opted to carry all my kit for the entire day. Although slightly heavier than I had hoped for, it was a welcome relief from carrying all the additional winter camping gear!

The ascent up Beinn a’ Chlachair is very accurately described as a bit of a boggy slog, although wet underfoot it did not take quite as long as I had first feared. 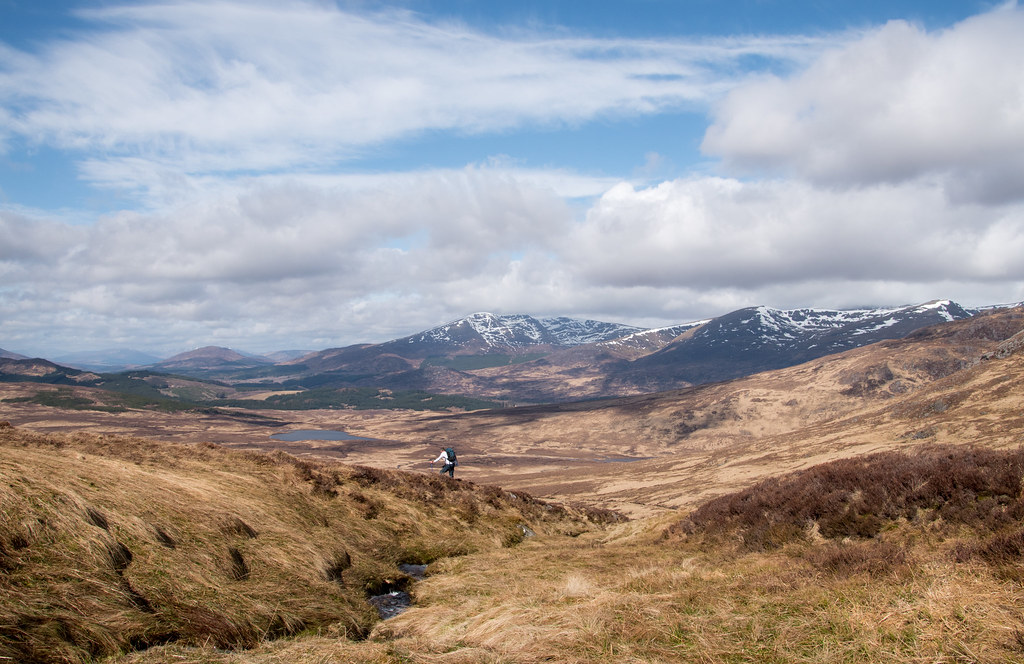 Still a good bit to go 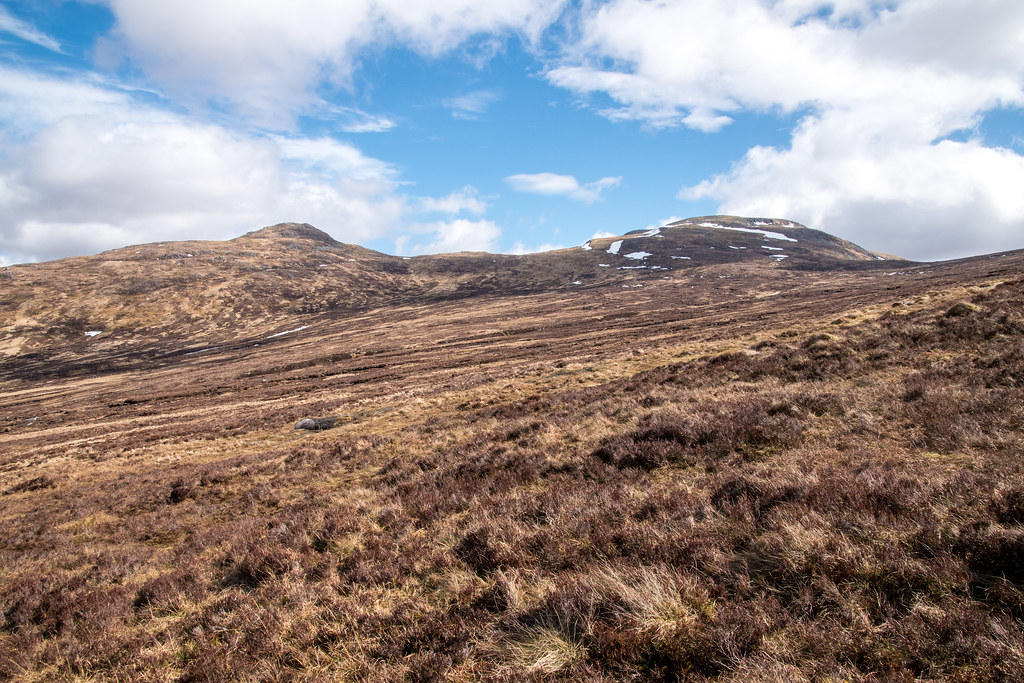 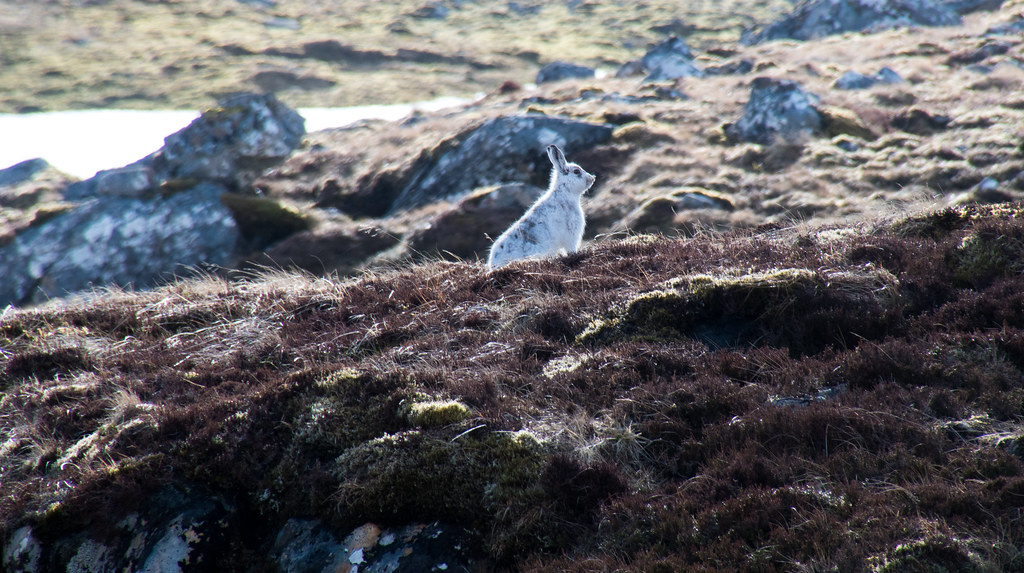 Once up the hardest part of the ascent you get some good views North East towards Creag Pitridh and Geal Charn. It is hard to believe that Creag Pitridh is even in Munro territory, looking tiny in comparison to Geal Charn. 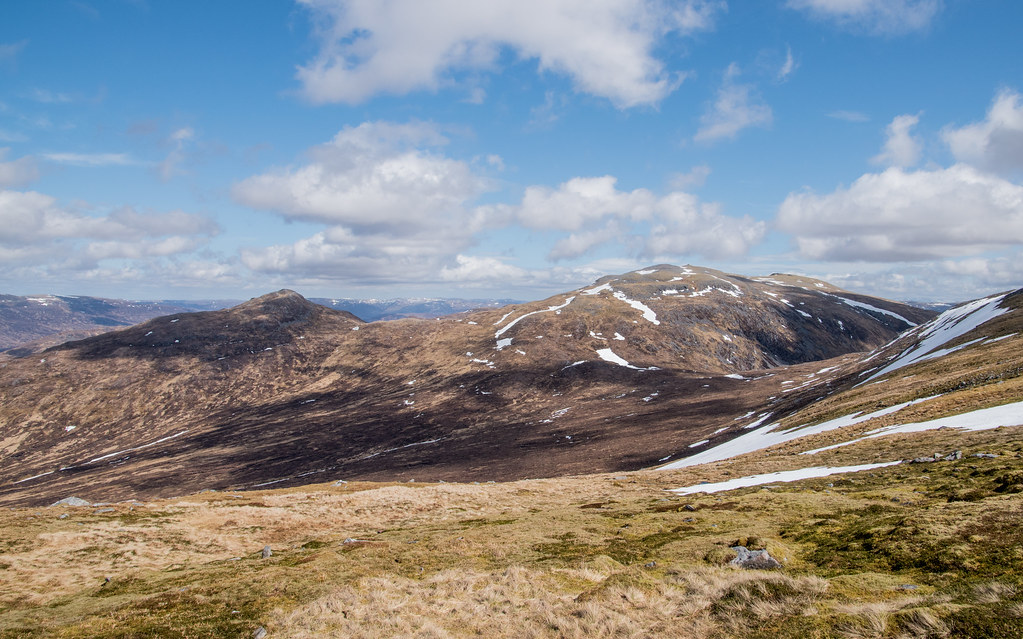 Looking to Beinn a’ Chlachair 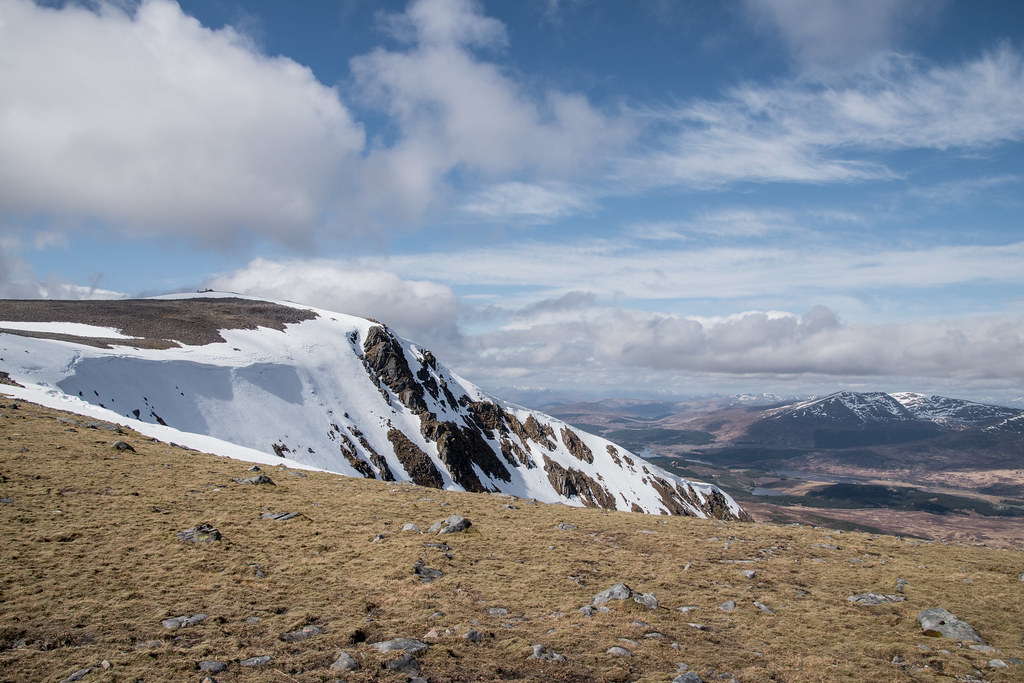 The summit of Beinn a’ Chlachair was welcome after the slow progress across the abundance of scree in ever increasingly strong winds. Perched for about 10 minutes on the top revelling in my early lunch whilst watching one of the most miserable looking DofE expeditions make their way off from the summit. 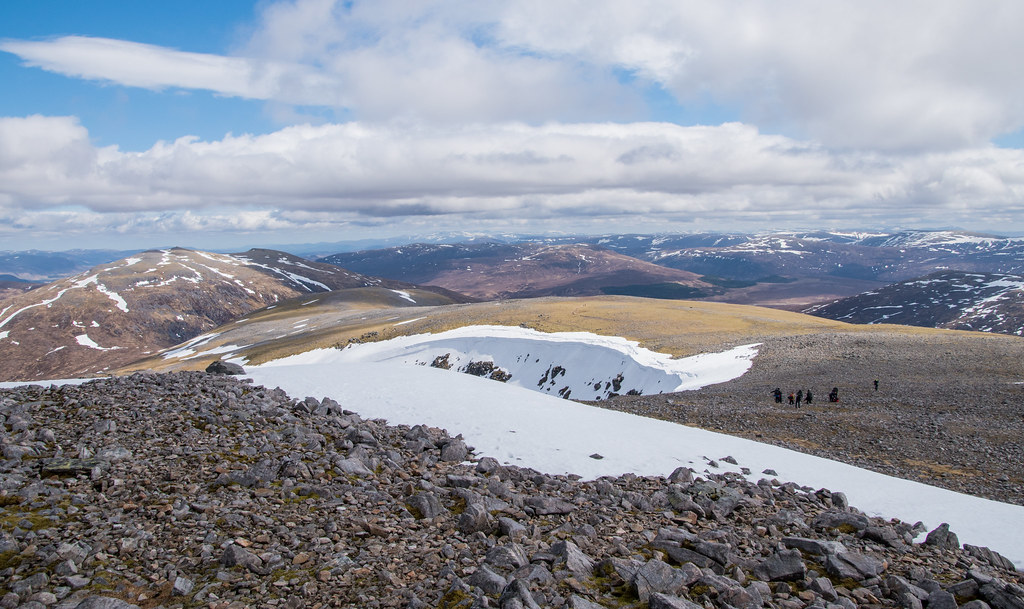 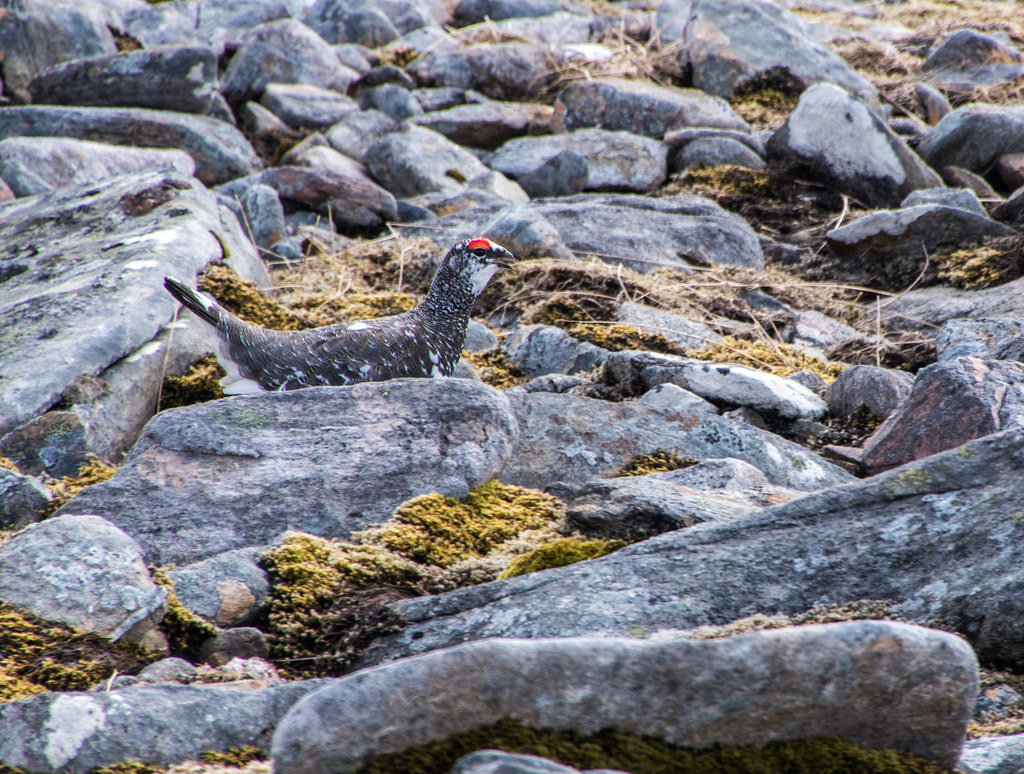 Before long I was descending down from Beinn a’ Chlachair ready to reach Bealach Leamhain before heading up Geal Charn. It was an unexpectedly steep and scrabbly scrabble – I may have not selected the easiest route, but it was good fun!

Geal Charn and a glimpse of Loch a’ Bhealaich Leamhain 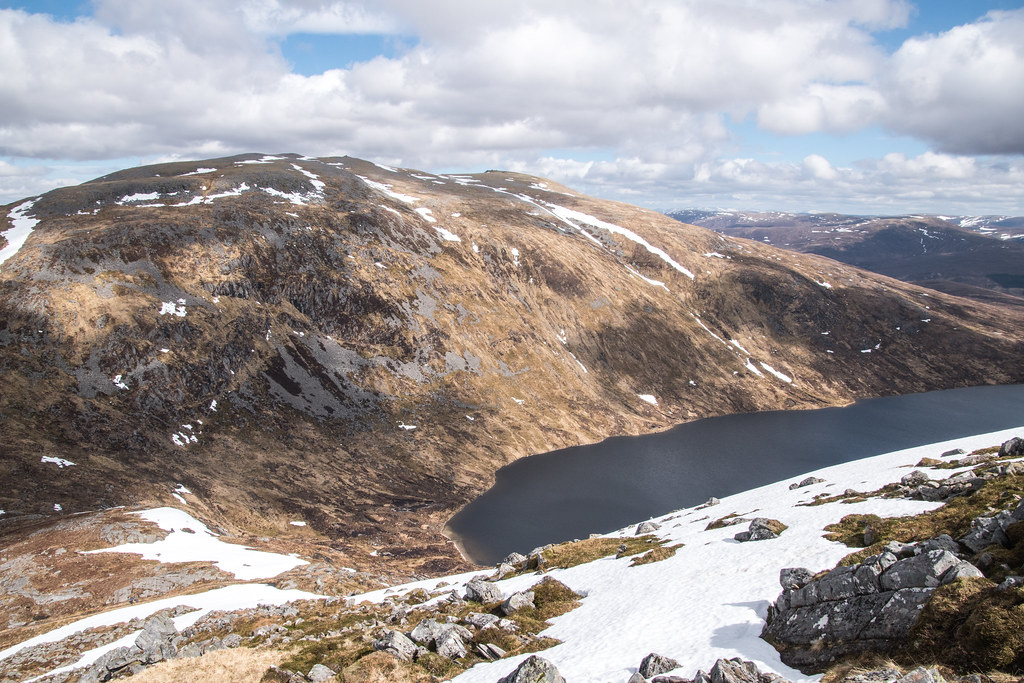 It was just before reaching the bealach I met one of the nicest couples you are ever likely to meet on the hills. After pulling teeth trying to get a hello from the group on Beinn a’ Chlachair this couple were a breath of fresh air!

On their second round of the Munros they had a few more decades of experience than myself but their passion for the hills was admirable. Questioning my rather large backpack they offered some suggestions on great hills to camp on in the future – unfortunately my memory of our Gaelic hills is rather pathetic and hence have forgotten all their suggestions.

I must have stopped and blethered for about 20 minutes, which maybe explains why afterwards I felt full of energy, but I liked the thought of it being down to the motivational chat.

Ascending up Geal Charn was rather uneventful, my thoughts focused on how old will I be when I stop getting up these hills, hoping I could replicate the unnamed couple. In one way it is a rather depressing thought, but then again reassuring to potentially have decades of time to spend out exploring Scotland’s mountains.

Views from the summit of Geal Charn 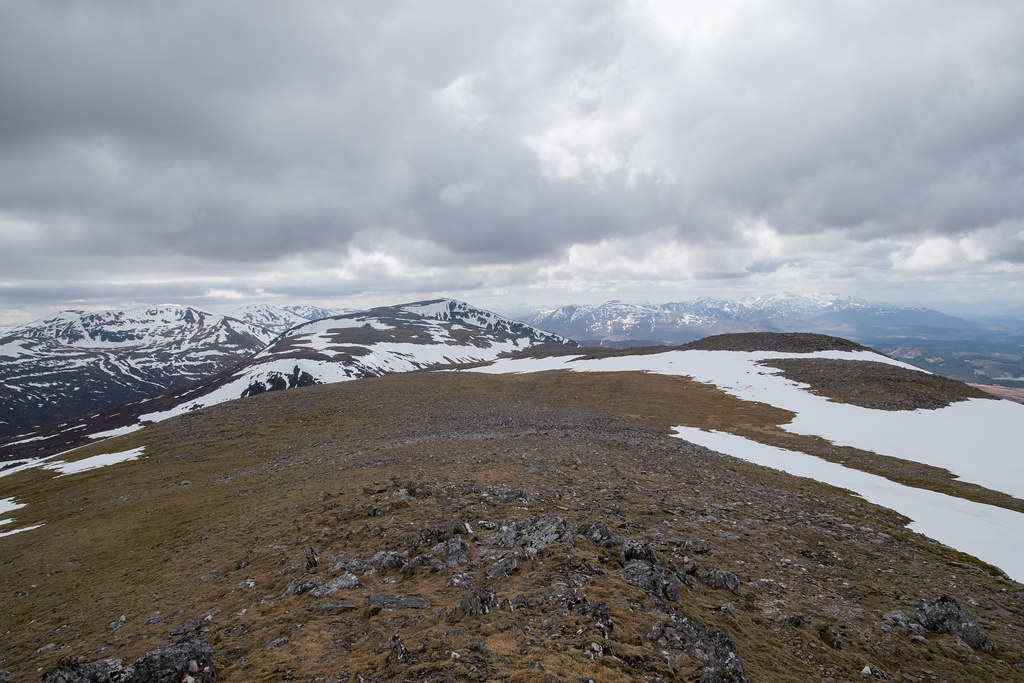 At the cairn on Geal Charn the wind was baltic and it looked like my potential high camp was much less favourable than heading down. I made what was now an easy decision to head towards Creag Pitridh and make the final weather call.

On the easy route between Geal Charn and Creag Pitridh 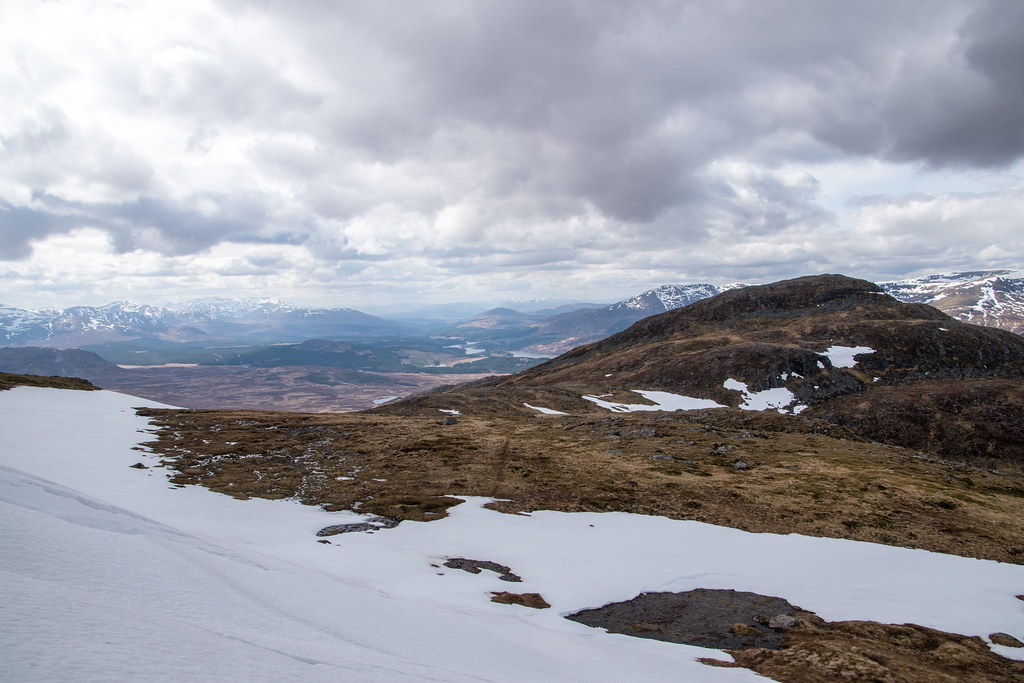 On the summit of Creag Pitridh 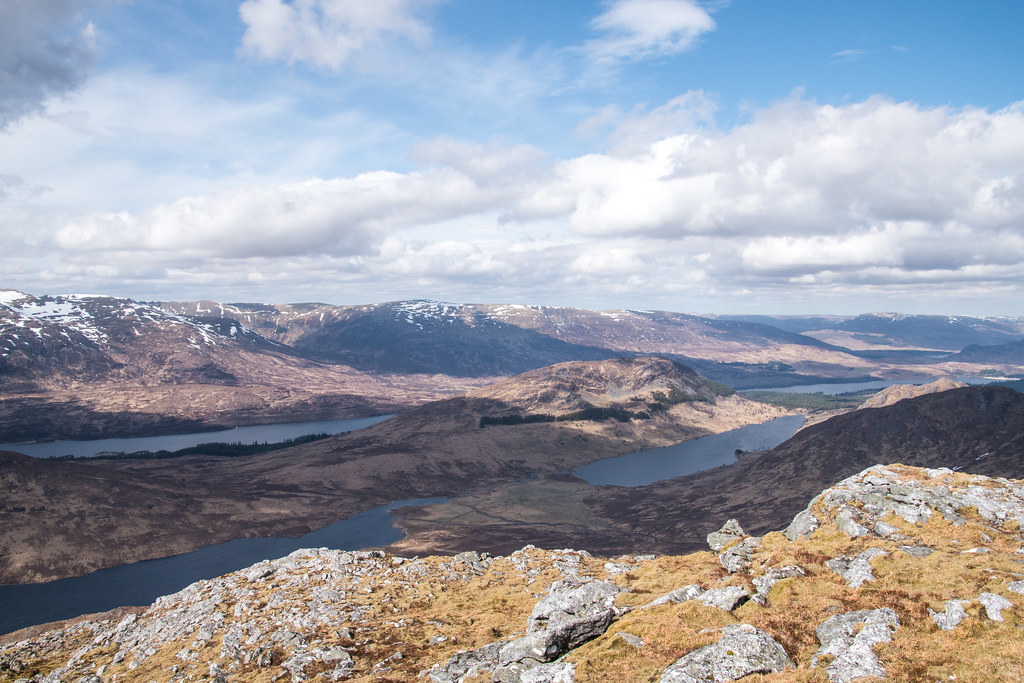 I did contemplate getting the tent pitched on the summit of Creag Pitridh, but knowing I had to get to Perth Broxden to collect Eilish at 10ish I decided the shorter walk in the morning would be more enjoyable than a high camp – this turned out to be one of the best decisions!

As I was heading down towards Lochan na h-Earba I could see the tent in “my space” just packing up. This added to my energy levels and I made super swift progress reaching their site minutes after they departed – the ground was almost still warm.

What a relaxing view 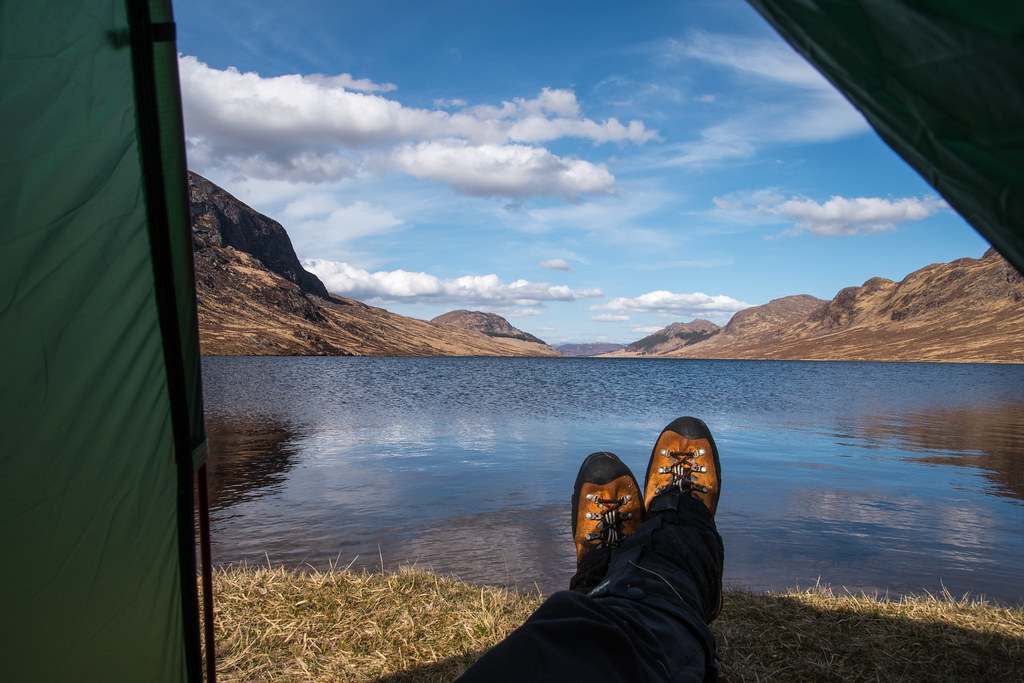 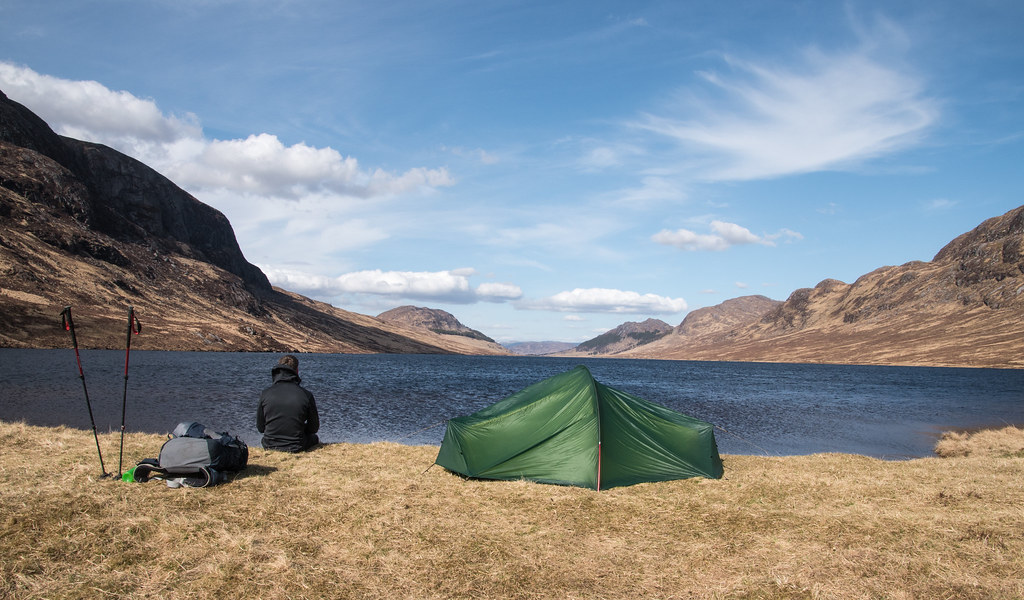 According to my checks of the weather it was due to clear up at about 02:00, moonlight was meant to be a minimum and wind was to be weak – all the right signs!

I drifted off to the land of nod very quickly but the constant wind rattling the tent resulted in a very interrupted sleep. By about 01:00 I had a quick check outside, but instead of setting up the tripod I attempted a quick long exposure.

View from the tent door 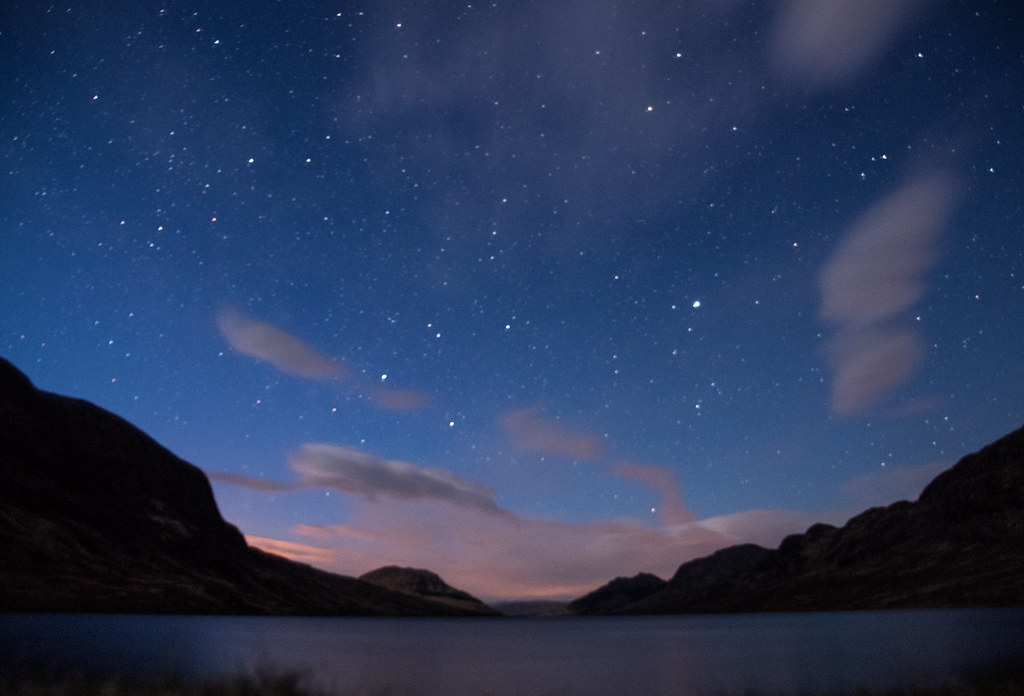 The wind was still slightly stronger than ideal and cloud cover was patchy so I opted for another hour of kip before getting dressed and heading out with the tripod.

Within that hour the weather Gods worked their magic. 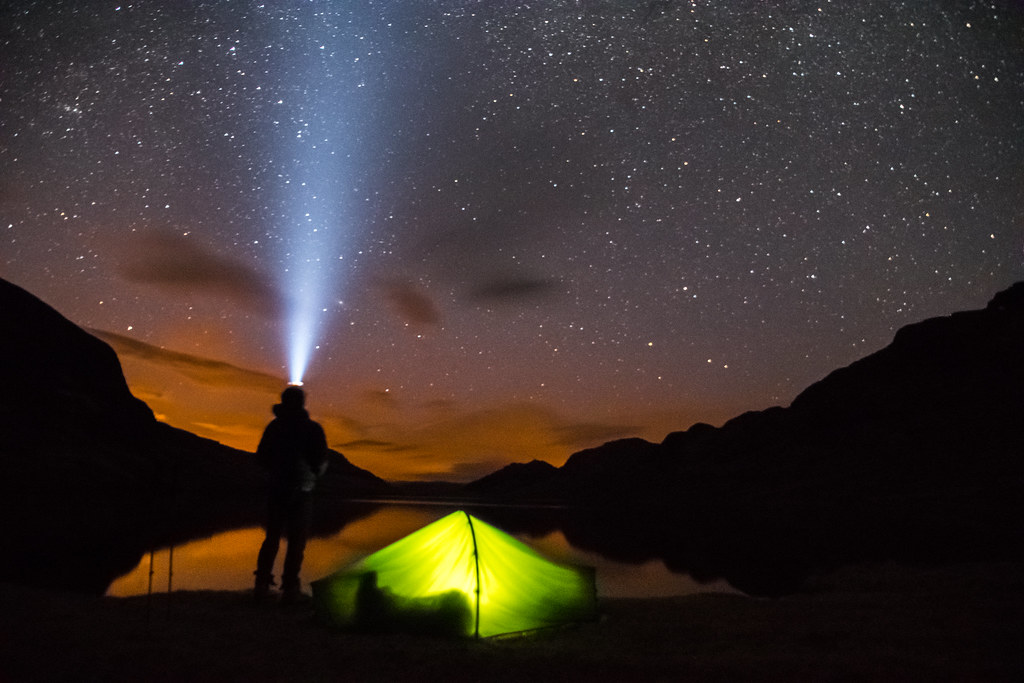 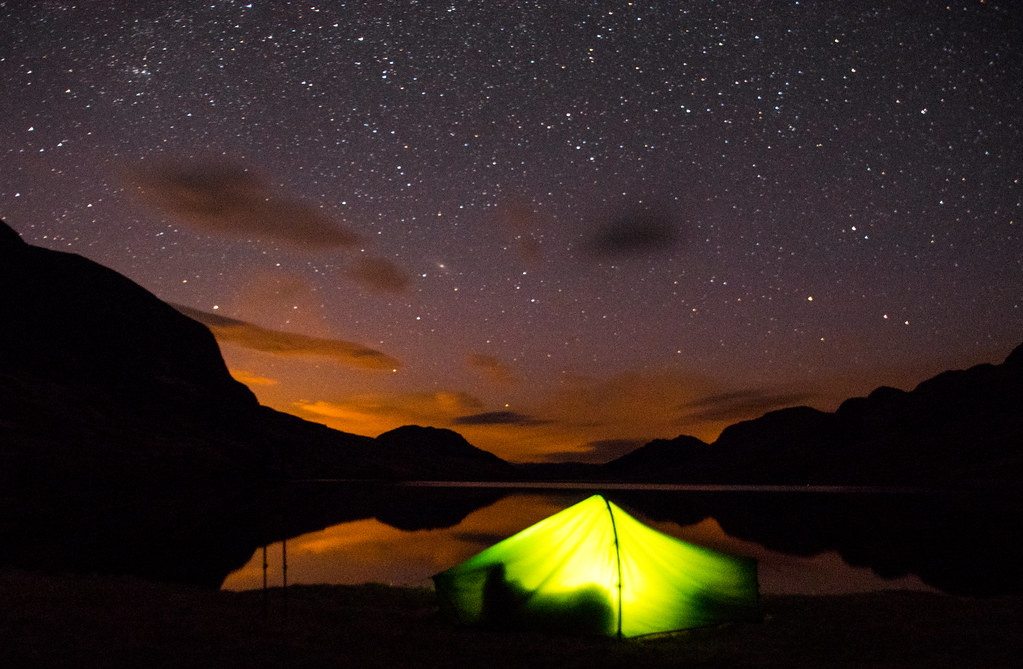 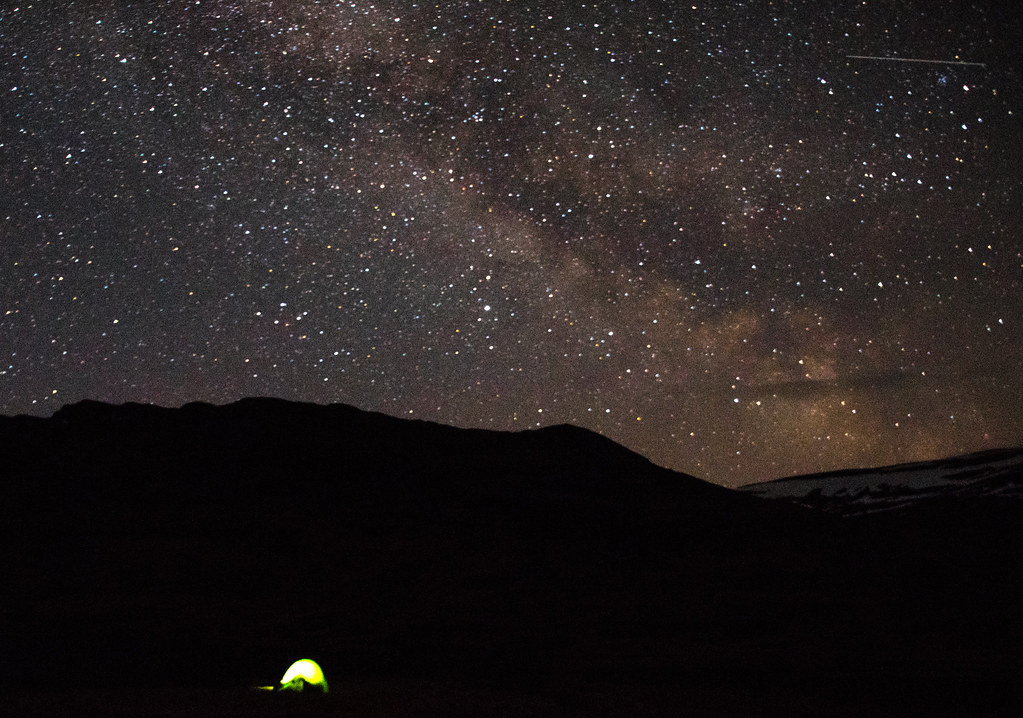 I must have had a good 30 minutes of taking photos before the early morning clouds rolled in. Happy enough with my efforts, even more delighted once I got to see them full size, I headed back to the land of nod.

Peaceful morning at Lochan na h-Earba to enjoy a light breakfast before the easy walk back to the car.

Contemplating something I assume 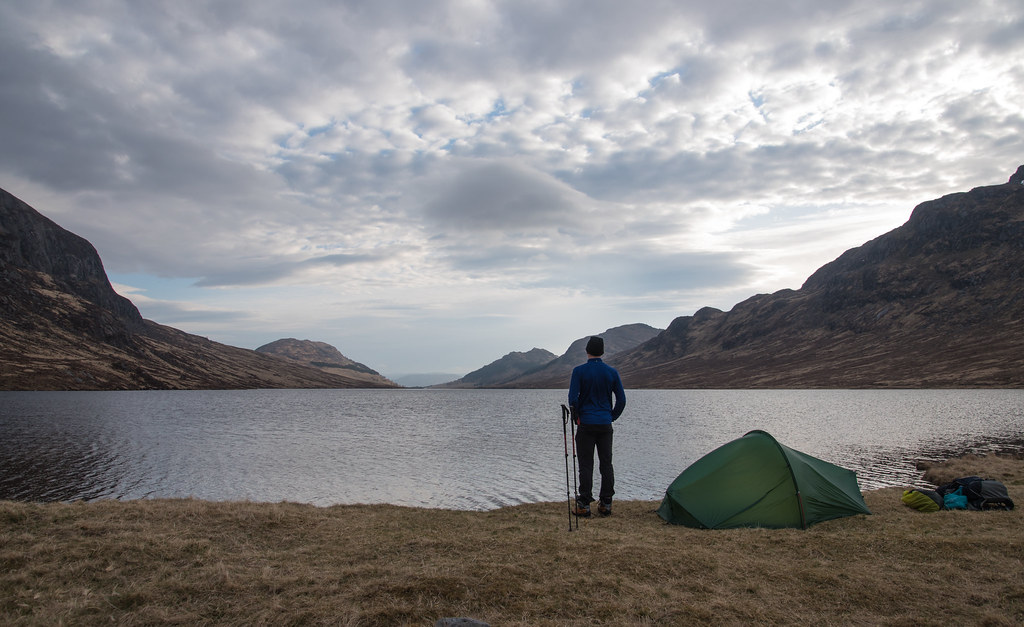 Quick dip of the feet 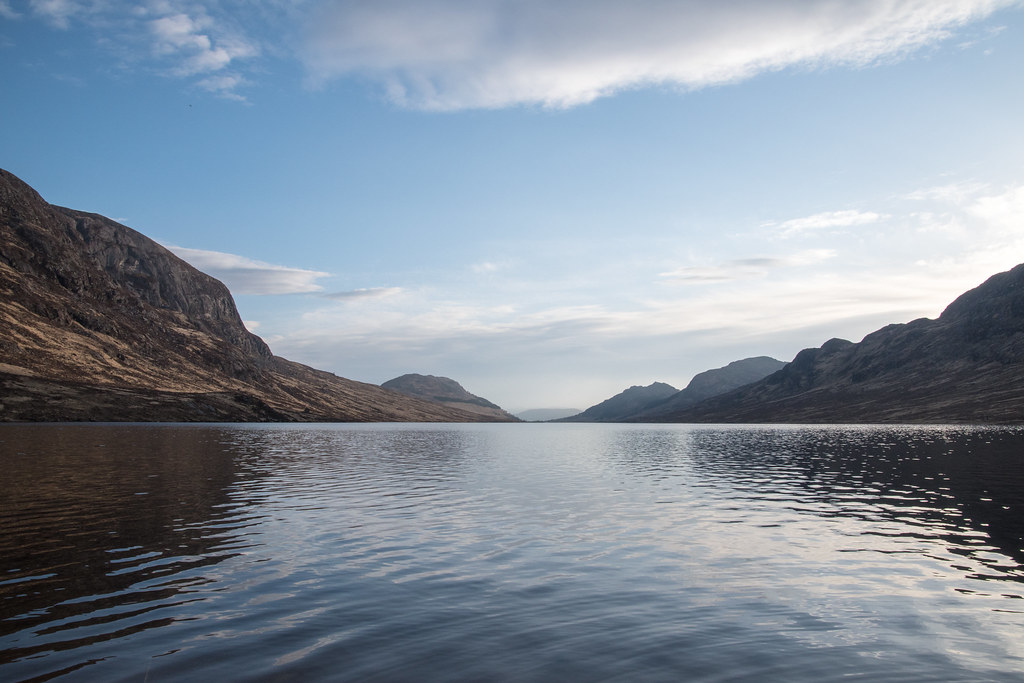 Yes, it was cold. Very cold!

From spending longer than planned enjoying the view of the Lochan, or farting about packing up the tent and million of other items of kit I was already behind schedule.

I took one last photo of the flooded path at the South West end of Lochan na h-Earba before deciding to put the camera away to help with getting to the car as quick as possible. 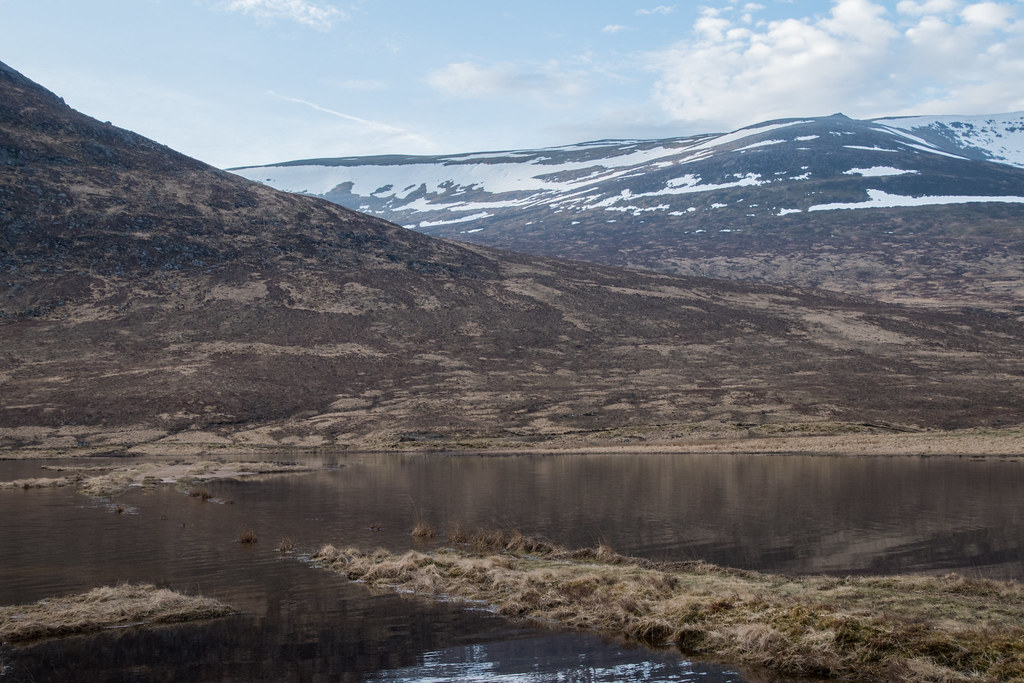 A very swift walk / near run on relatively fresh legs with all my food consumed and a lighter bag meant I was able to claw back the time I had lost staring into the Lochan by the time I reached the car.

On the drive down to Perth it was not just the brilliant night in the tent or prancing around in the pitch-black taking photos that gave me that “post munro buzz” (before the tiredness crash), but mainly from the brief chat with the “Bealach couple”.

Just goes to show even the most straight forward, or mundane Munro outings can really bring just as much excitement & challenge, depending on who you bump into on the hills and if you ditch the day bag and take the tent.

Thanks for reading!
Andy