I first attempted to climb Beinn Chabhair back in April. Despite the forecast for clear, sunny skies, we were engulfed in fog, got very lost and were forced to retreat. I was very disappointed as that was my first attempt at a munro.

I also managed to have a few spectacular falls in the bog which was very wet and very deep. I was trying to unwrap a Chewit while simultaneously leaping over a bog and managed to SPLAT right in...My pals managed to fish me out thankfully. Failed attempt in April...curse you, fog!

I'm starting to run out of hills close to Glasgow and having made plans for the evening, decided to reattempt Chabhair as it is only an hour from Glasgow.
Parked in the usual spot and begun the steep climb at the start. It was like climbing up through a jungle, everything was so lush and green compared to the brown, deadness of April. I had brought along a couple of friends, one of whom had never climbed a munro before. We then reached the long, fairly flat walk through the moorland. It was an absolutely BEAUTIFUL day. The bog was a lot more manageable this time thanks to our spell of lovely, dry weather. I think we all managed to get a soggy boggy foot at some point but nothing compared to the full body experience I had previously suffered!! We left the gently rolling moorland and started ascending once again. We soon reached the point I was forced to turn back last time. We rounded a corner and saw the final slog looming ahead of us. My poor friend nearly had a break down at this point...we had been walking almost 3 hours and she was under the impression that we had reached the summit...With some morale Skittles and lots of encouragement, she plodded on up and down the final undulations and we all made it to the top. It was blowing an absolute gale at the top so we found a wee hidey hole to eat our pieces and enjoy the views....which were magnificent! The walk back to the car was long but helped greatly by the good weather and good company. I was very proud of my pal as it maybe wasn't the wisest choice of hills for her first one! I didn't remember just how long/steep it was....It's like childbirth, you forget the pain of it! 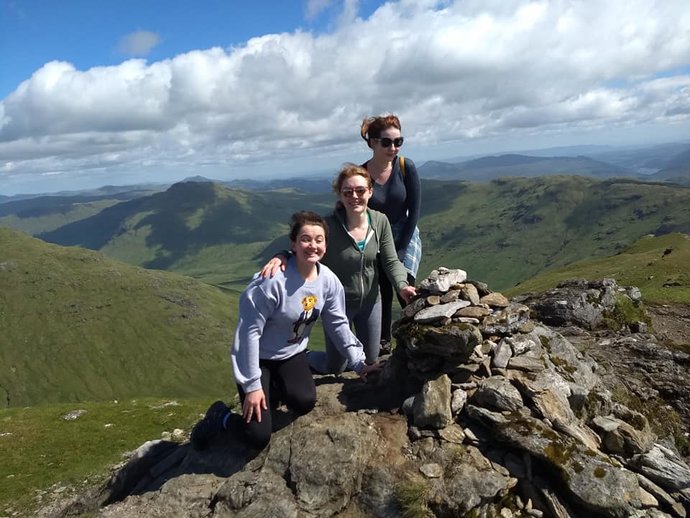 Clinging on for dear life! Re: Second attempt at Beinn Chabhair....SUCCESS

Good to see you were successful this time and all, in then end, enjoyed it

This was my first solo munro in 1987 and one of the few for which I've still to find the photos - I do well remember the bogs though ! - cheers

Re: Second attempt at Beinn Chabhair....SUCCESS

rockhopper wrote:Good to see you were successful this time and all, in then end, enjoyed it

This was my first solo munro in 1987 and one of the few for which I've still to find the photos - I do well remember the bogs though ! - cheers

I enjoyed it very much indeed!! Wow, quite ambitious to choose this one for your first solo mission, you're a lot braver than me! The bogs are legendary. Luckily they weren't nearly as bad thanks to all the dry weather.