The previous day I had looked down on the magnificent Mamores from Ben Nevis, so it was obvious that they should provide my destination for another fine day's walking. Parking in Glen Nevis near the Polldubh Falls, I had a quick look down at the waterfall before heading south into the Coire a'Mhusgain. The walk up the corrie above the Allt Coire a'Mhusgain was delightful, with a good path through mixed vegetation. The top of the corrie was in view from the outset. 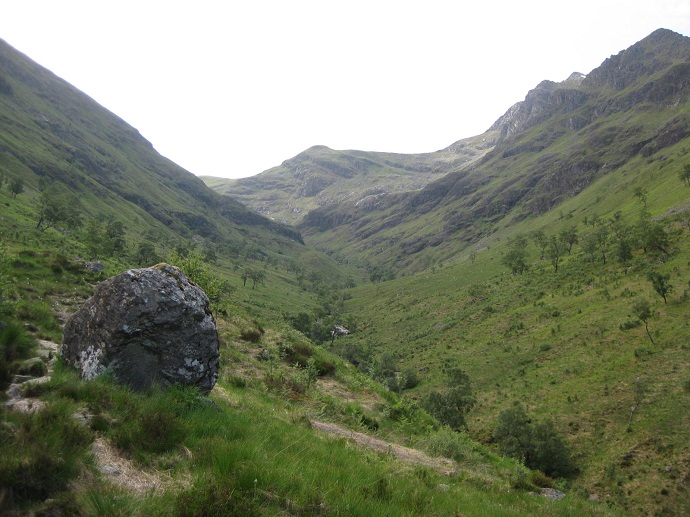 Height was gained rapidly, with helpful zigzags on the steepest sections, and the jagged outline of Stob Ban began to emerge on the skyline. 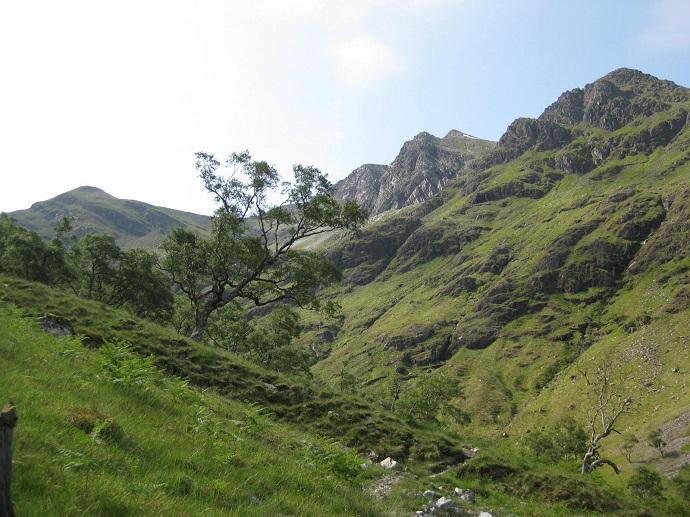 The contorted rock formations could soon be observed at closer quarters. And on the steep approach to the bealach, the full splendour of Stob Ban's dramatic cliffs was revealed. 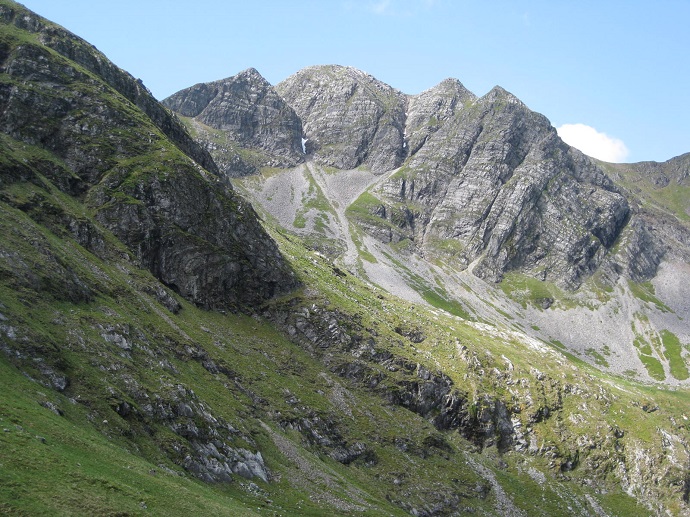 On reaching the bealach, Sgor an Iubhair stood out to the east. 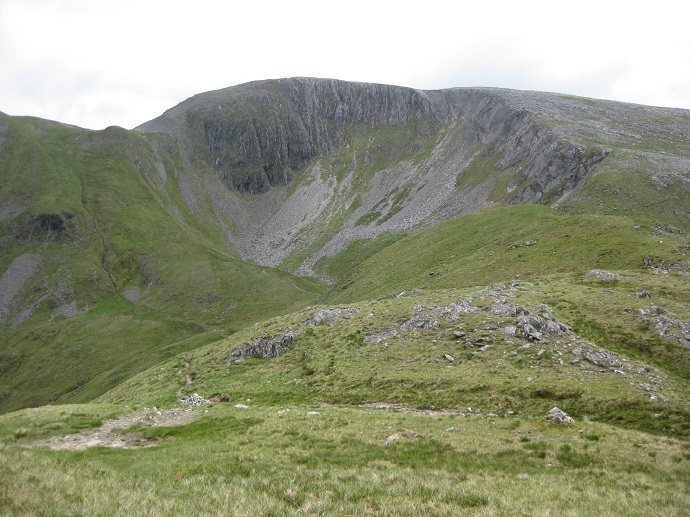 In the opposite direction, my route would follow the steep approach to Stob Ban. The walk up from the bealach provided plenty of opportunity to admire the rugged grandeur of the mountain. Sgurr a'Mhaim now dominated the view to the north-east. 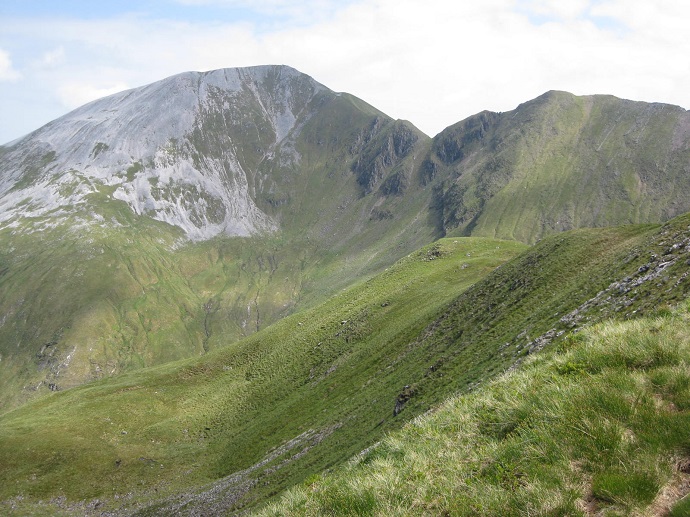 The quartzite rocks of Stob Ban were a mixture of grey and dazzling white in the sunshine. In the dry conditions the rock was not slippery but felt light and crunchy underfoot. Throughout the walk Ben Nevis loomed on the other side of its Glen. 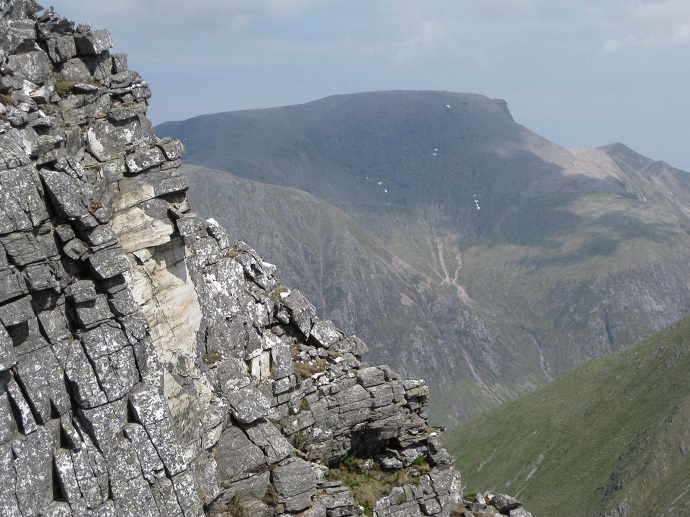 On approaching the summit, the view eastwards across the range was fabulous, with Sgor an Iubhair dominating the foreground. From the summit, I could gaze down on the path I had taken along the corrie. I also had a first sight of the superb ridge that was to form the next part of my walk, towards Mullach nan Coirean. 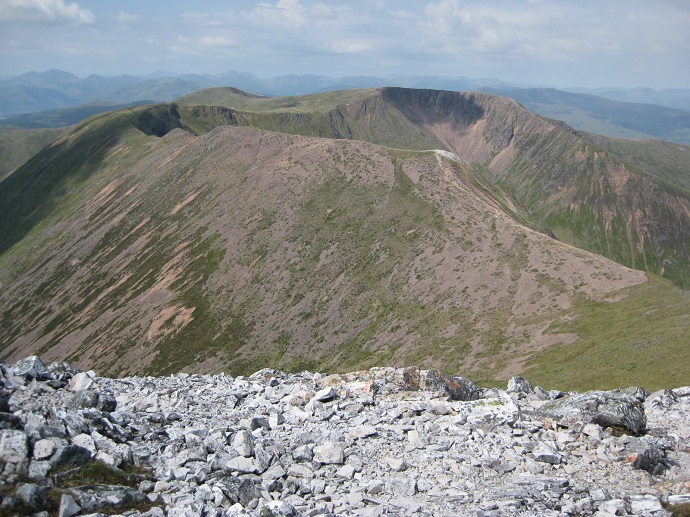 An impressive cairn at a minor summit on the ridge had an even more impressive backdrop - Bidean nam Bian. 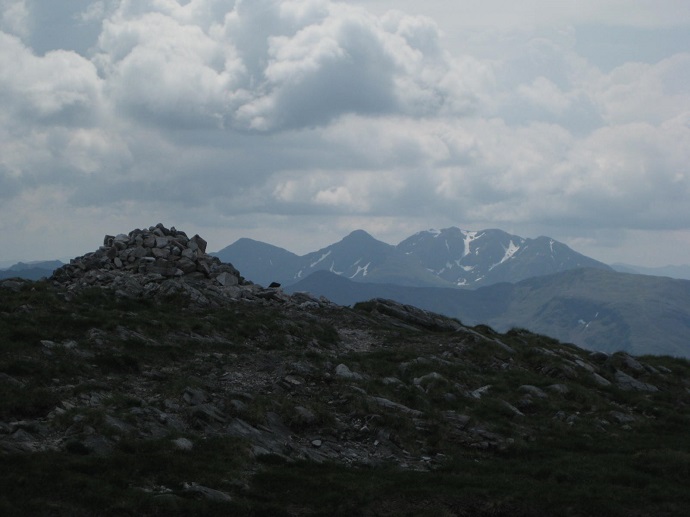 Here the quartzite had been left behind, and the rocks were now pink granite. 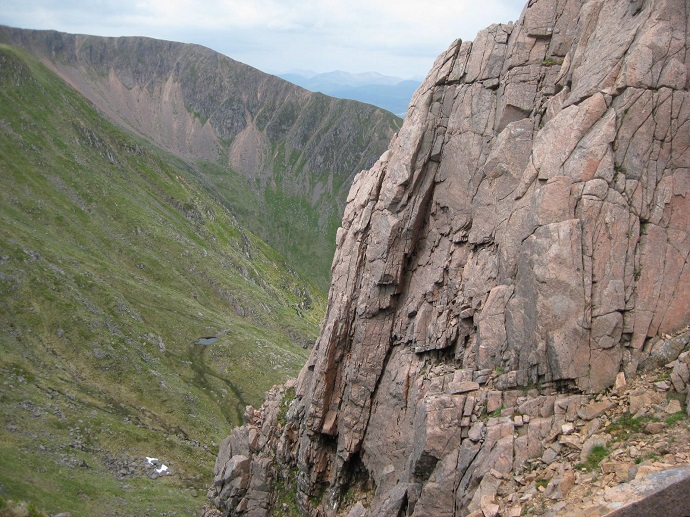 Despite the steep appearance, the walk along the ridge was straightforward in the dry, almost windless conditions. 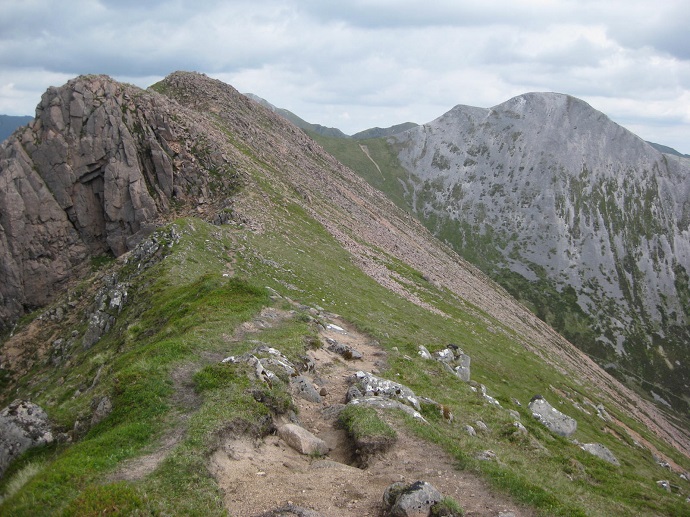 The contract between the pink ridge and the white of Stob Ban was very striking, particularly when the sun shone on the quartzite. The final approach to Mullach nan Coirean was on pleasant grassy slopes. 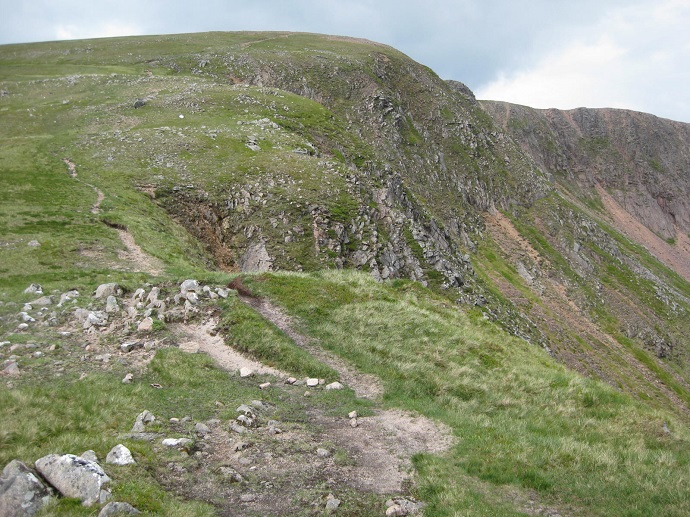 From the summit, Loch Linnhe stretched away to the south. 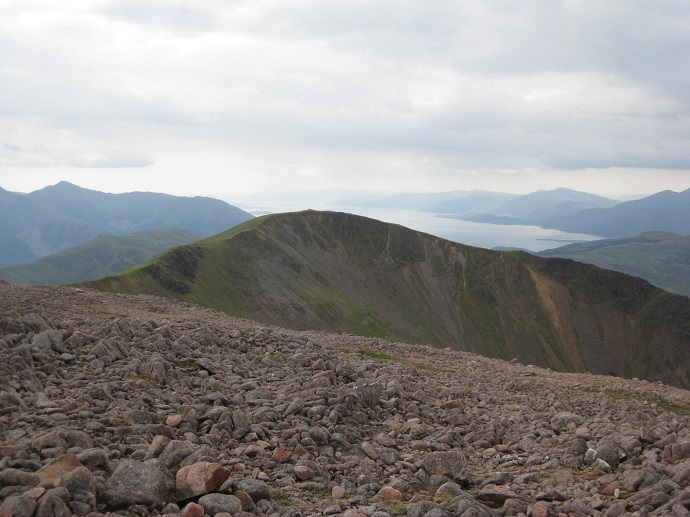 Now the view back across the Mamores was dominated by Sgurr a'Mhaim on the left. 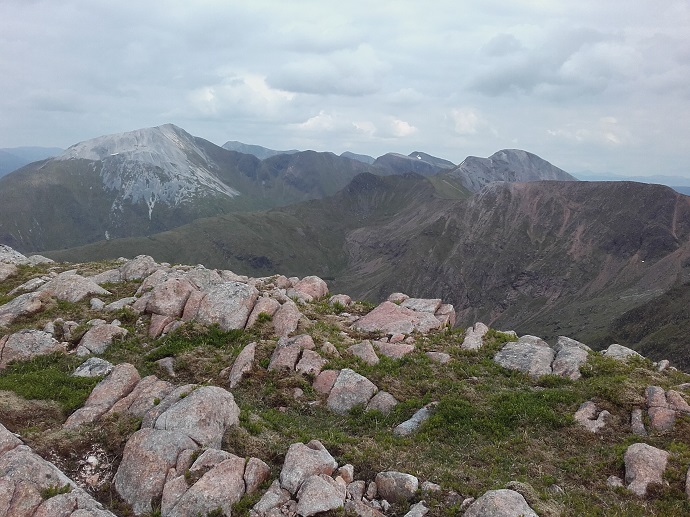 The twin peaks of Beinn a'Bheithir looked very fine on the other side of Loch Leven. 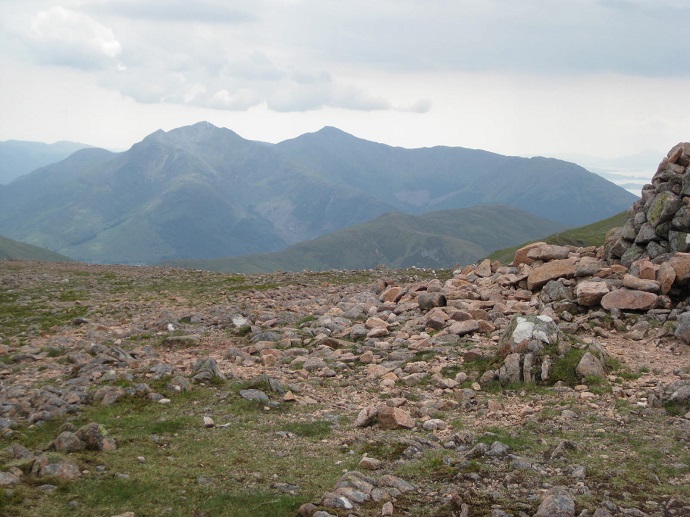 On the descent the pink granite ridge was seen to fine effect, with Stob Ban just poking out behind. The path along the Coire Riabhach became increasingly steep and rough as it followed a fence downwards. Fortunately for me, there was very little bogginess to contend with today. The path approached Glen Nevis though a felled area of forestry, but for some reason, a few spindly trunks had been left standing. 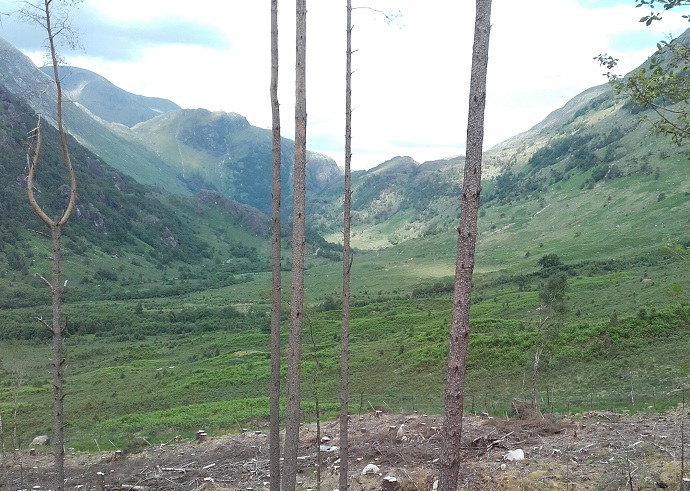 At this point there was a rumble of thunder from the direction of Fort William, so I decided to quicken my pace for the last section of the walk. As it turned out, after a superb and completely dry day in the hills, I found myself driving through a downpour within a few minutes of leaving the car park.

Superb report and pics, after getting a brilliant view of Stob Ban and Sgurr a'Mhaim from the big and wee Buachaille's this month i'm well looking forward to exploring the Mamores. Stob Ban looks just as impressive close up as it does from a distance, perhaps even more so!

Good idea getting off the hill at the first sound of thunder, we got chased of Meall an t-Seallaidh last month by a massive thunder and lightning storm, it's not enjoyable racing downhill in fear of your life!