Goatfell: but we didn’t expect that

Goatfell: but we didn’t expect that


“Are you doing a hill then?” was the predictable question when the details of a family gathering on Arran were discussed.

Yet out of sixteen, just three made it to the starting line. Most escaped the island before being caught up in my enthusiasm, and four of the remaining seven opted for a combination of retail, lunch and donkeys. That’s the problem with Arran; there are just too many things to do. Failed negotiations about potential lifts, drop-off points and collection points left us with what ended up being simply a walk for a bus - with a Corbett and a ridge thrown in for good measure: or so I thought.

In the building heat, the three-Corbett ridge in the west was deemed a hill-too-far, especially for younger legs who we didn’t want to shame us in their fitness and unbridled reserves of energy.

“We’ll just go beyond Goatfell and down the other side,” I’d said, little realising how significant that little word “just” would prove to be. We planned to extend the trip, do a little more than the tourist trudge up and down with the added benefit of getting away from the crowds. Catching the bus back from Sannox would be our return. 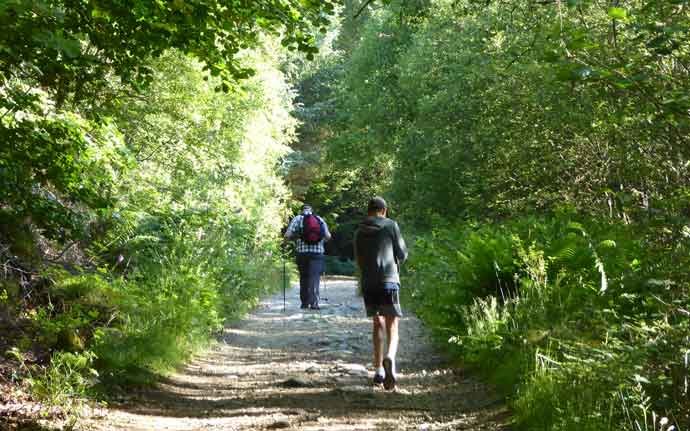 It'll just be a gentle stroll

Three generations marched out of Brodick and past the brewery before mingling with the rising throngs above. The occasional cloud of midges were encountered and fortunately the clegs had not yet marshalled their forces: we were mercifully bug-free when above the tree-line. 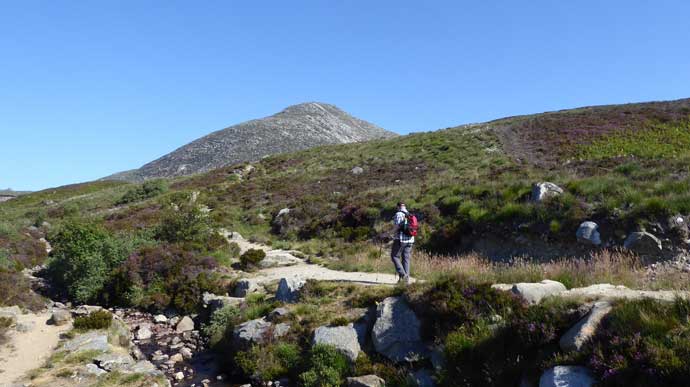 Striding out for a saunter 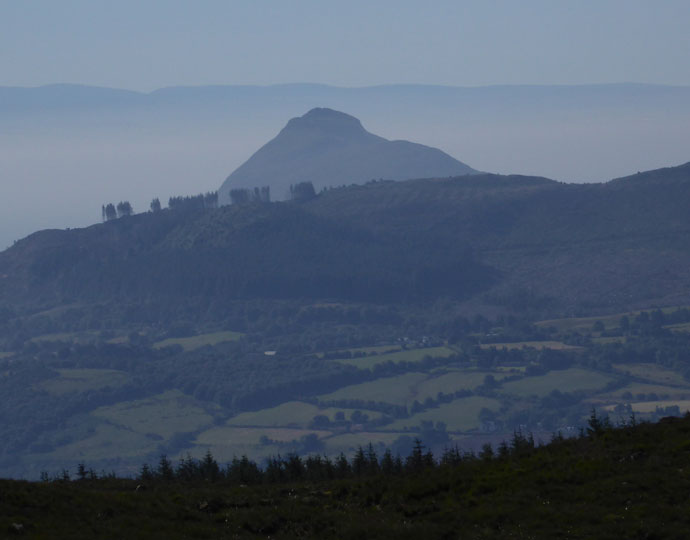 Holy Island peeps over the skyline as impressively as Ailsa Craig

We passed flagging fathers, competitive siblings, and sullen daughters being told that the steepest part was over. Masters of the parental lie proliferated. Did we ever believe that we were “nearly there?”

On the top, amidst clusters of celebration, back slapping and a general sense of relief, I took the proud Dad-and-Lad photo of the two younger generations plus the Scare-Mum- Sh****ss shot, with her dearly beloved perfectly posed to give the illusion of being perched on the edge of the world. 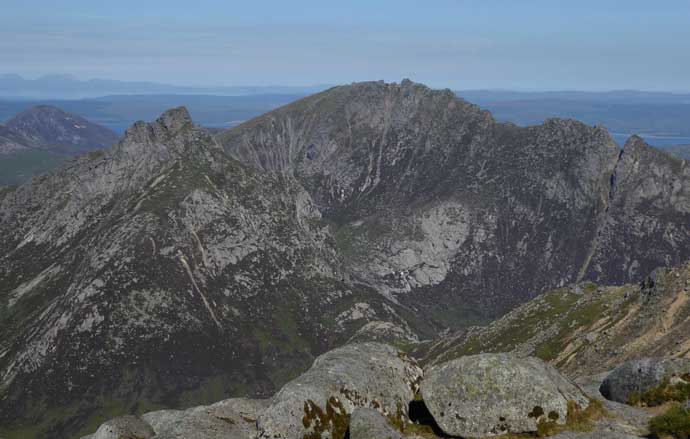 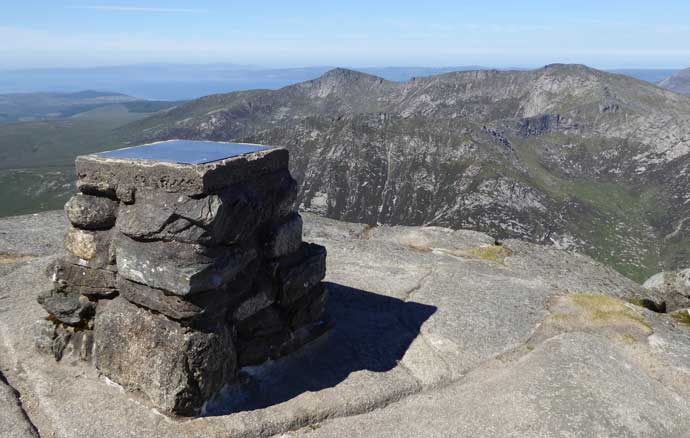 With the never-ending, multi-coloured necklace of approaching visitors getting nearer, we decided it was time to leave the crowds behind.

Panorama from the top

We all wandered north, then two of us scrambled to the top of North Goatfell, somehow taking a curiously circuitous route to get there that seemed to spiral round and round the top before arriving at the easy path that came up from the other side - at least we enjoyed the exploration. 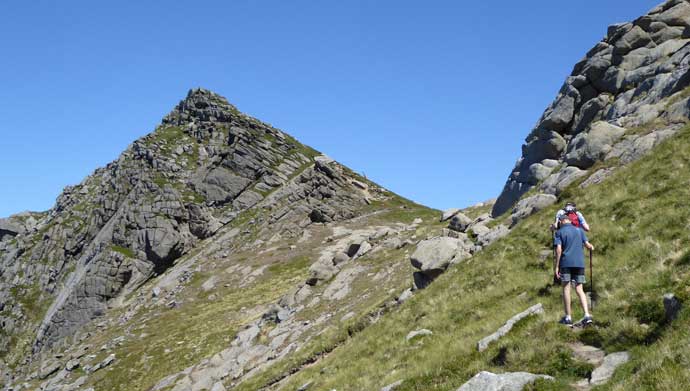 Skirting round to North Goatfell

Re-united with generation two, we shunned the bleached, yet empty motorway of the pencil-straight path down to Corie. Instead, we headed out to Mullach Buidhe. From there, in solitary splendor, we watched as a small group made a half-hearted attempt at a direct approach to North Goatfell before they were repelled and headed off for the half-tube descent down Glen Coire. Left on our own to enjoy the view of serrated skylines, pinnacles and points, slabs, cliffs and the darkly-named Witches Cleft on Caisteal Abhail, we strode out to The Bastion, Cioch na h Oighe, at the far end of the ridge.

Looking back, bristles continued to move along the skyline of the Corbett’s top, like target ducks on a fairground show. At closer quarters the ground at our feet allowed a geology lesson for the youngest – about the granularity of granite and explanations about snow, neve, ice and glaciers. Mind you, describing the impact freeze-thaw action seemed out of place in the midst of Scotland’s hottest spell for decades. The path we were following was clear, running parallel with the ridge of Caisteal Abhail opposite. The path on the map looked clear as well, especially the one that zig-zagged off the end of the ridge and down to the Allt a Chapuill.

It’s just a shame we didn’t take it.

As we reached the rocks at the end of the ridge a clear path dropped steeply to the left: we took it. Or rather, the others followed me down it. Then it dropped even more steeply. And I still claim it was a path, or at least a track that someone else had used to descend. Then, as is so often the case in these situations, it simply petered out. The incongruous appearance of a green plastic mug in the heather suggested that someone had been there before, and I silently hoped that they were still alive when they dropped it. By now, the youngest generation appeared to be thoroughly enjoying the excitement of this diversion, relished the challenge and he calmly proceeded to take every care that his usual adrenaline-fuelled escapades avoided. The middle generation went quiet and slowly followed, while I pondered on the reaction of mother / wife / grannie when they heard what we’d been up to – or rather down to.

Looking across to the slopes of Caisteal Abhail opposite we could measure our progress. It was slow.

However, after slithering down various permutations of gravel, scree, desiccated heather and the odd slab of rock, the line of a track appeared a couple of hundred feet below. It didn’t swing sharply to the right as I’d hoped and the map suggested. Instead it descended at a more reasonable gradient towards the Sannox Burn. It was a long way down - Cioch na h Oighe, from the Sannox Burn

Yet progress was still slow. Finally we could hear the sound of running water. Cooling off in the stream, drinking it or simply standing in it, we looked back up the hillside.

“Well,” said the youngest with a nonchalant air of understatement, “we didn’t expect that did we?”

My original plan had seen us down at the bus stop at Sannox with plenty of time to pop to the beach and relieve tired limbs for a good hour or so.

We caught the bus with barely ten minutes to spare and were grateful that the youngest generation was judicious in his report of the day. I’m now hoping his mum doesn’t lurk on Walkhighlands.

Re: Goatfell: but we didn’t expect that

Sounds like an excellent day out!
Have I mentioned it's my favourite place before??? Really enjoyed that, brought back memories of when I did your route pretty much in reverse.
Excellent scramble up, don't know if I'd enjoy it so much going down

Re: Goatfell: but we didn’t expect that

Wow, I always wanted to go to Arran but this makes me want it even more

Going rogue on a steep descent makes a great story to tell on WH Meets (maybe not on family meetings).

I hope MY parents don't lurk on Walkhighlands, they would have a heart attacks if they saw some of my silly poses on the edge of big drops