This was another day out inspired by some walk reports people had posted on here, these two munros are just right to be done together, the terrain is easy going, you can stick to the well defined tracks and paths on the plateau or go off piste and make it a bit of an adventure, we did both largely because the visibility was ok and it was as dry as a bone so we could venture anywhere without fear of being "bog bound".

We set off from the car park near Achlean and walked along the rest of the metalled road to its end, then followed the well defined track that goes alongside the River Feshie.

Views from the track. 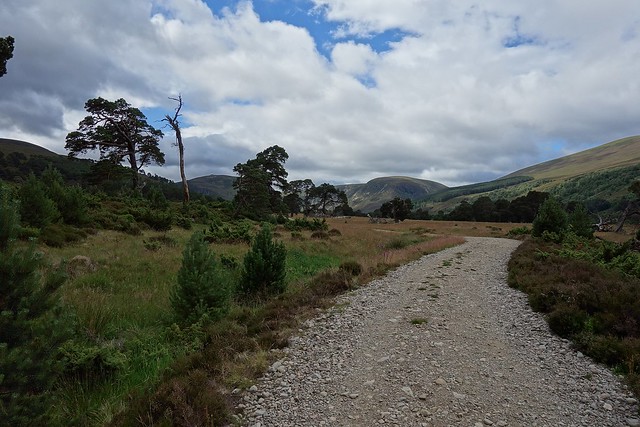 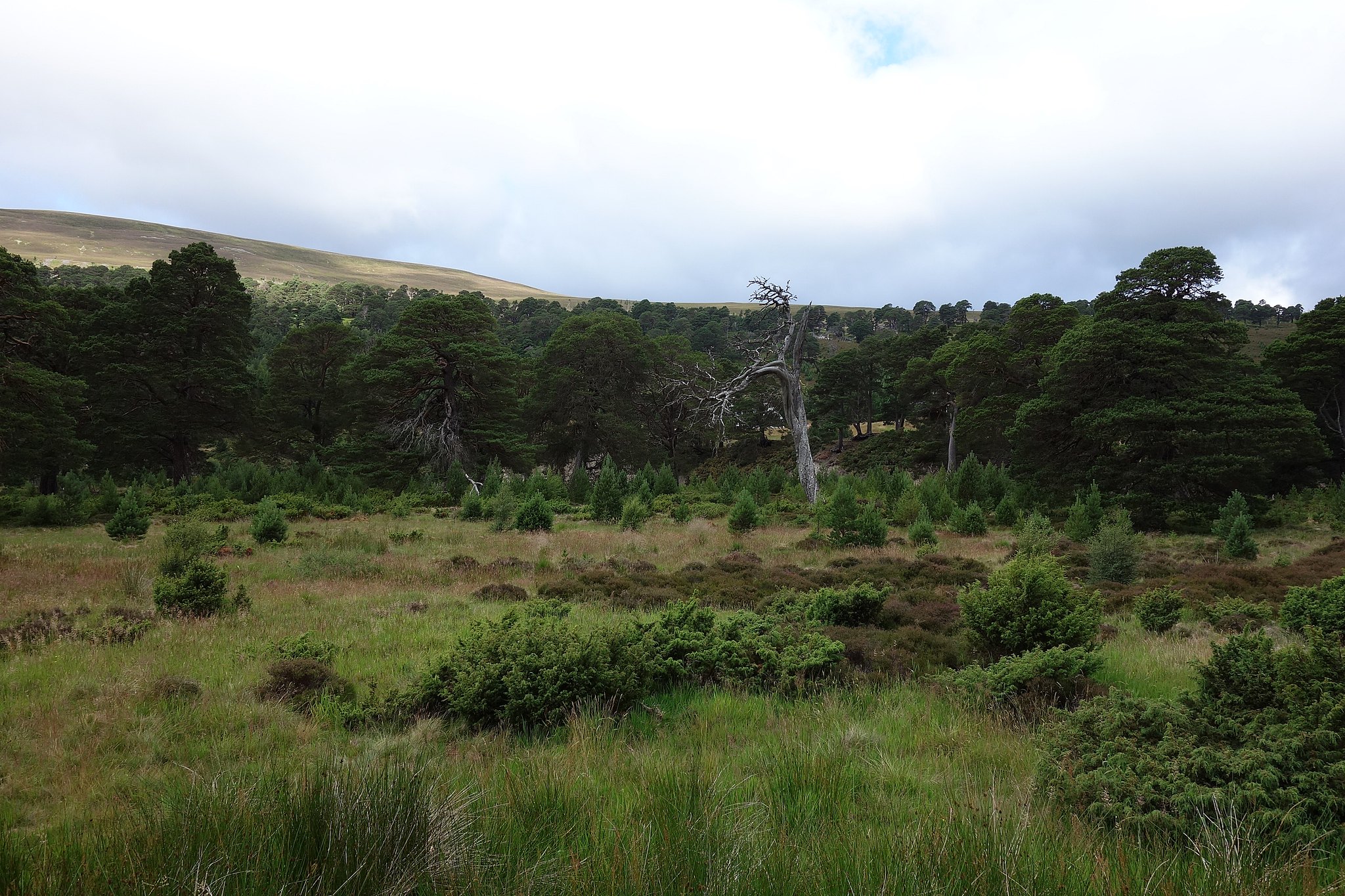 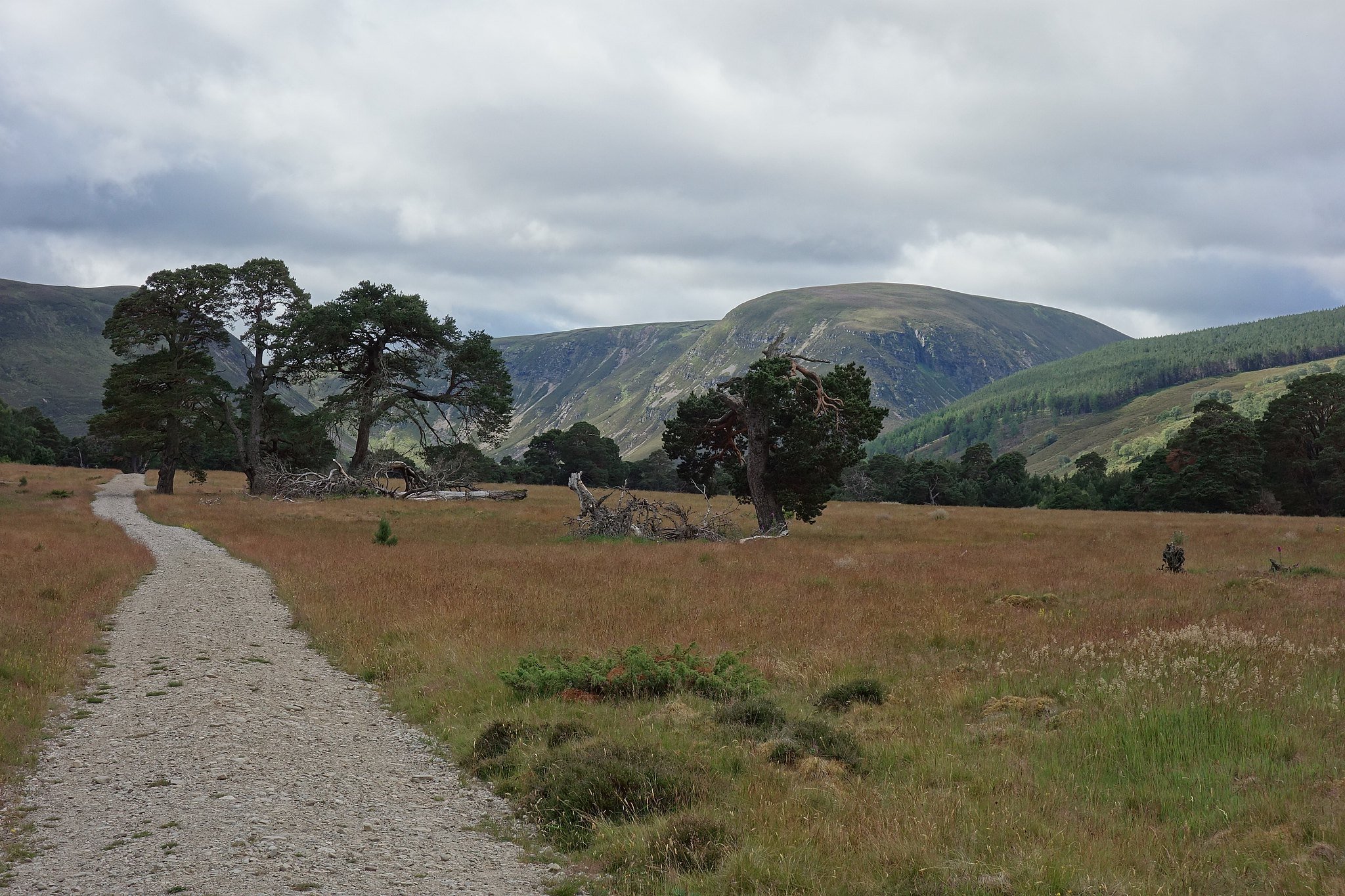 We followed this for some distance over open countryside and through woodland until we arrived at the start of the uphill track around NN848935.
This is quite simply a land rover track, steep to start with but soon it levels out to become a gradual ascent almost as far as the summit of Mullach Clach a'Bhlair.

Views on the ascent. 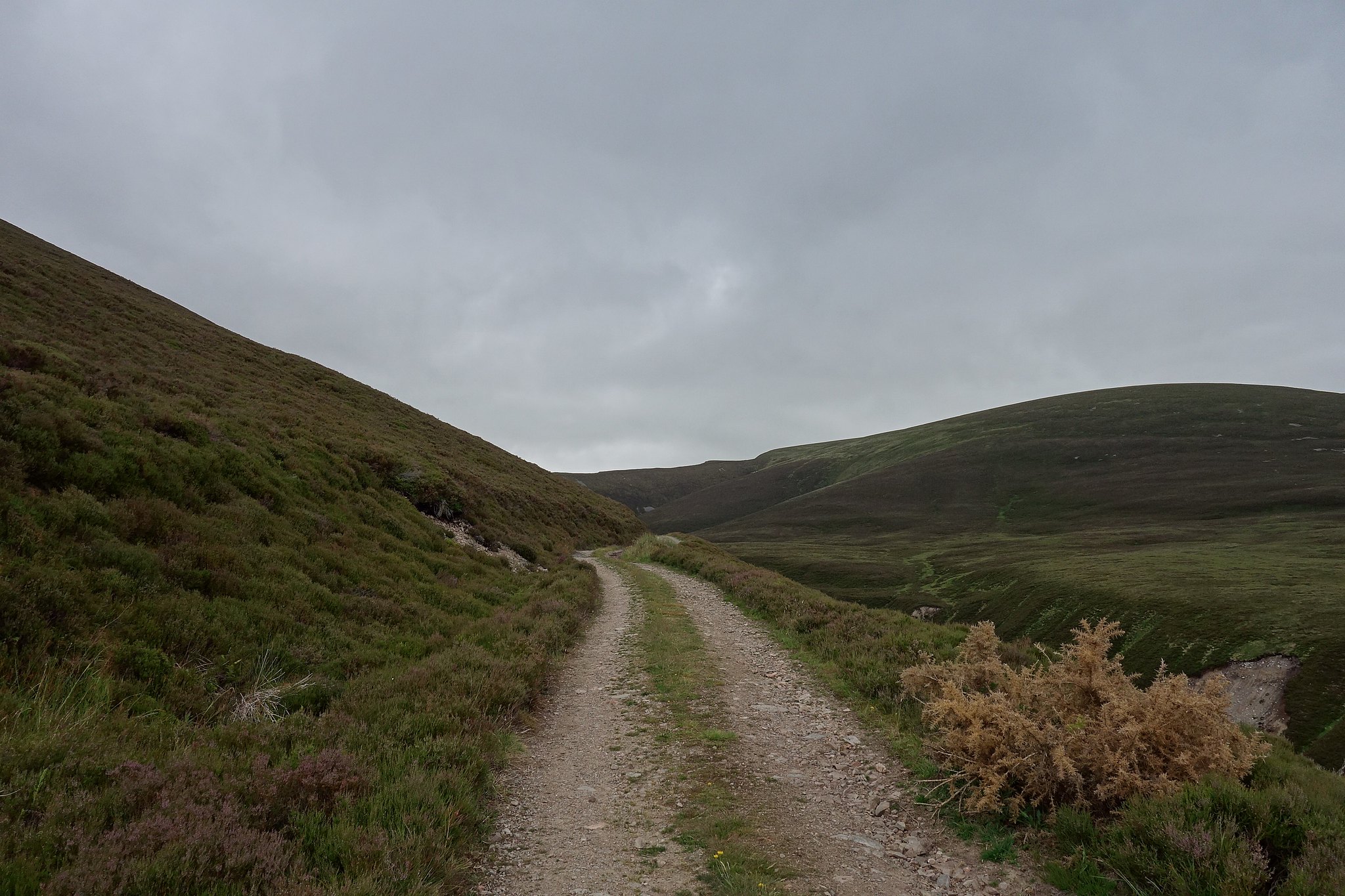 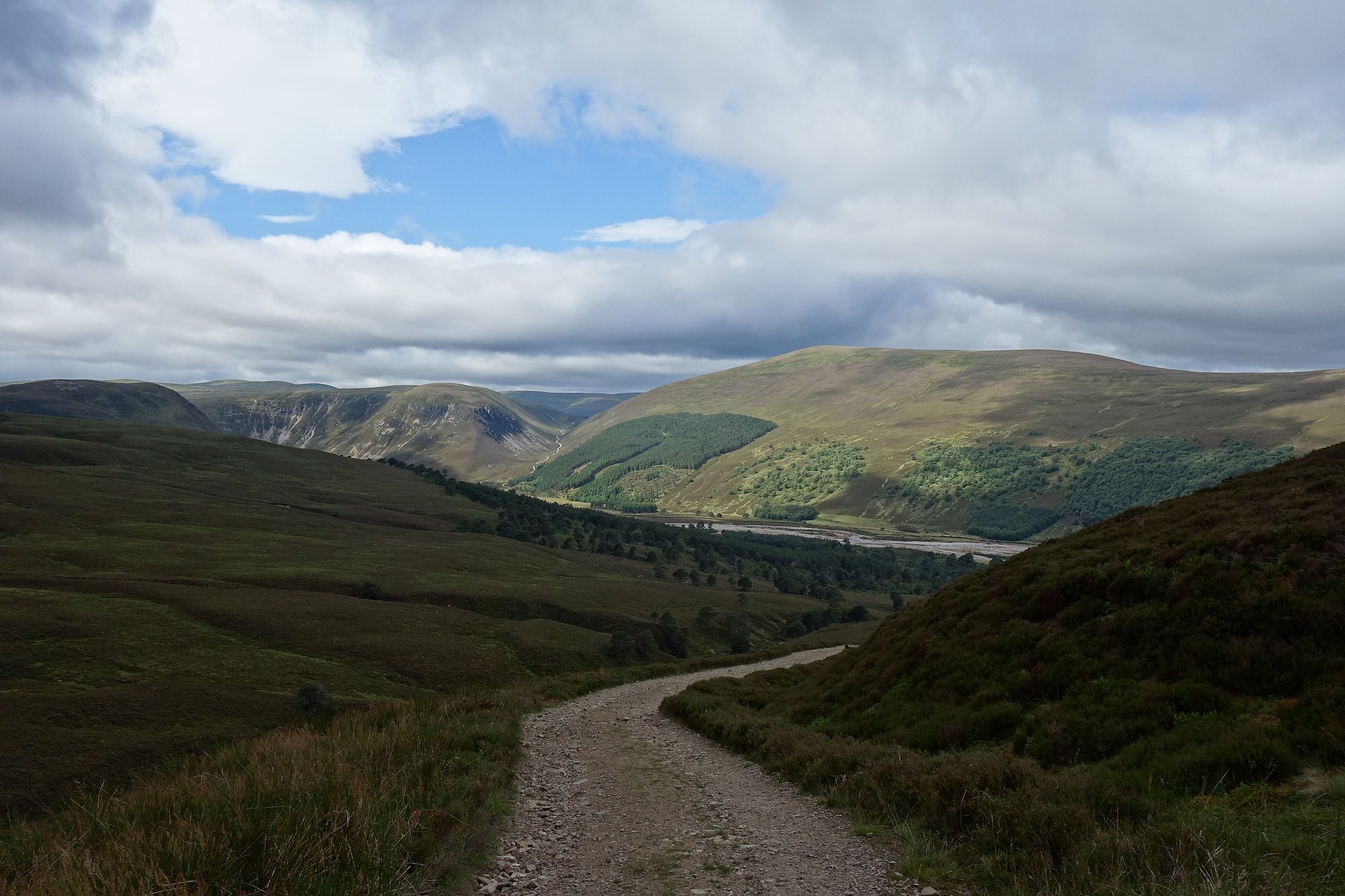 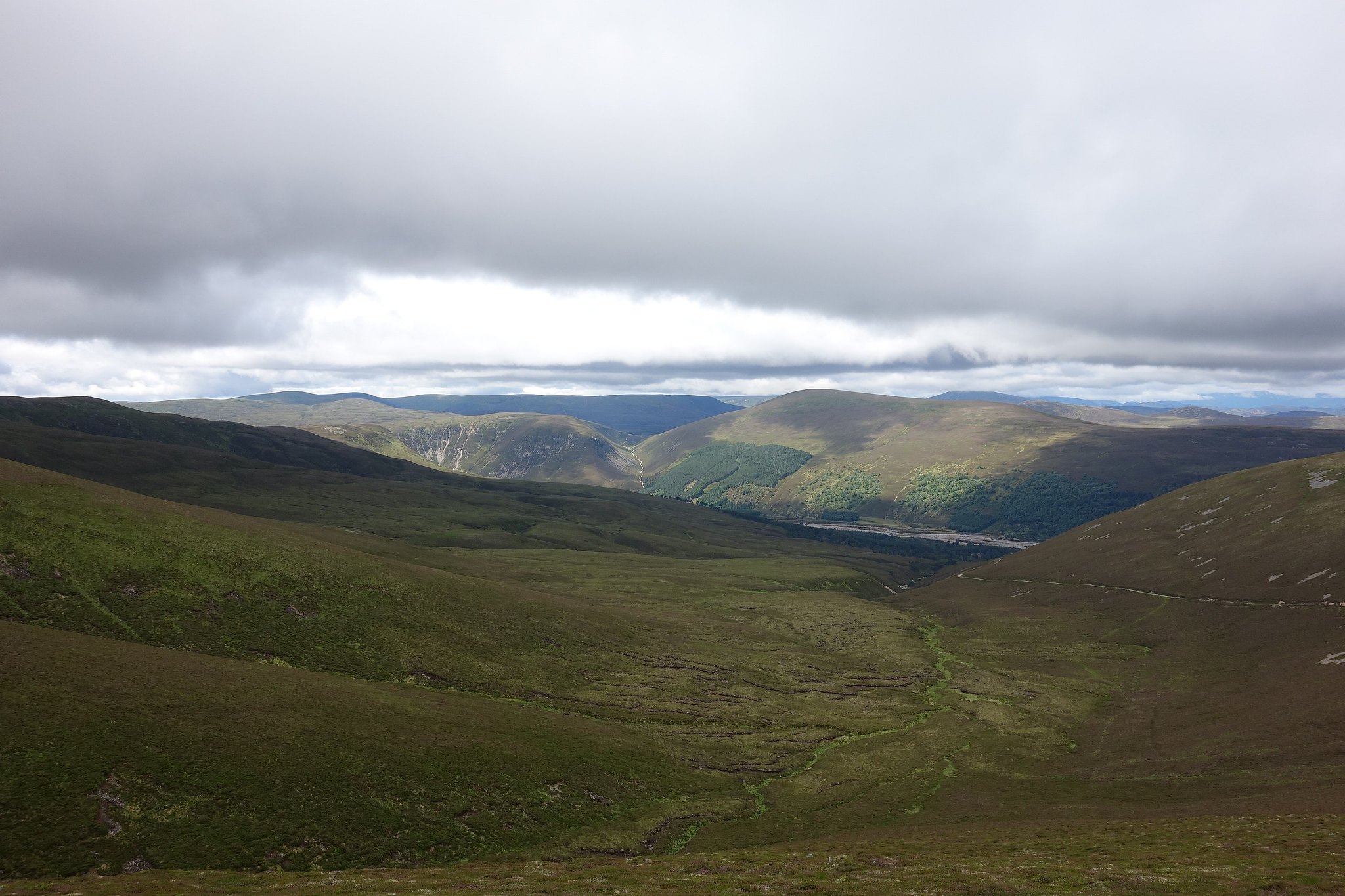 At around NN883930 there's a small cairn that marks the start of the path that takes you to the summit of M C a'B, this is clear and takes you directly to the summit cairn. 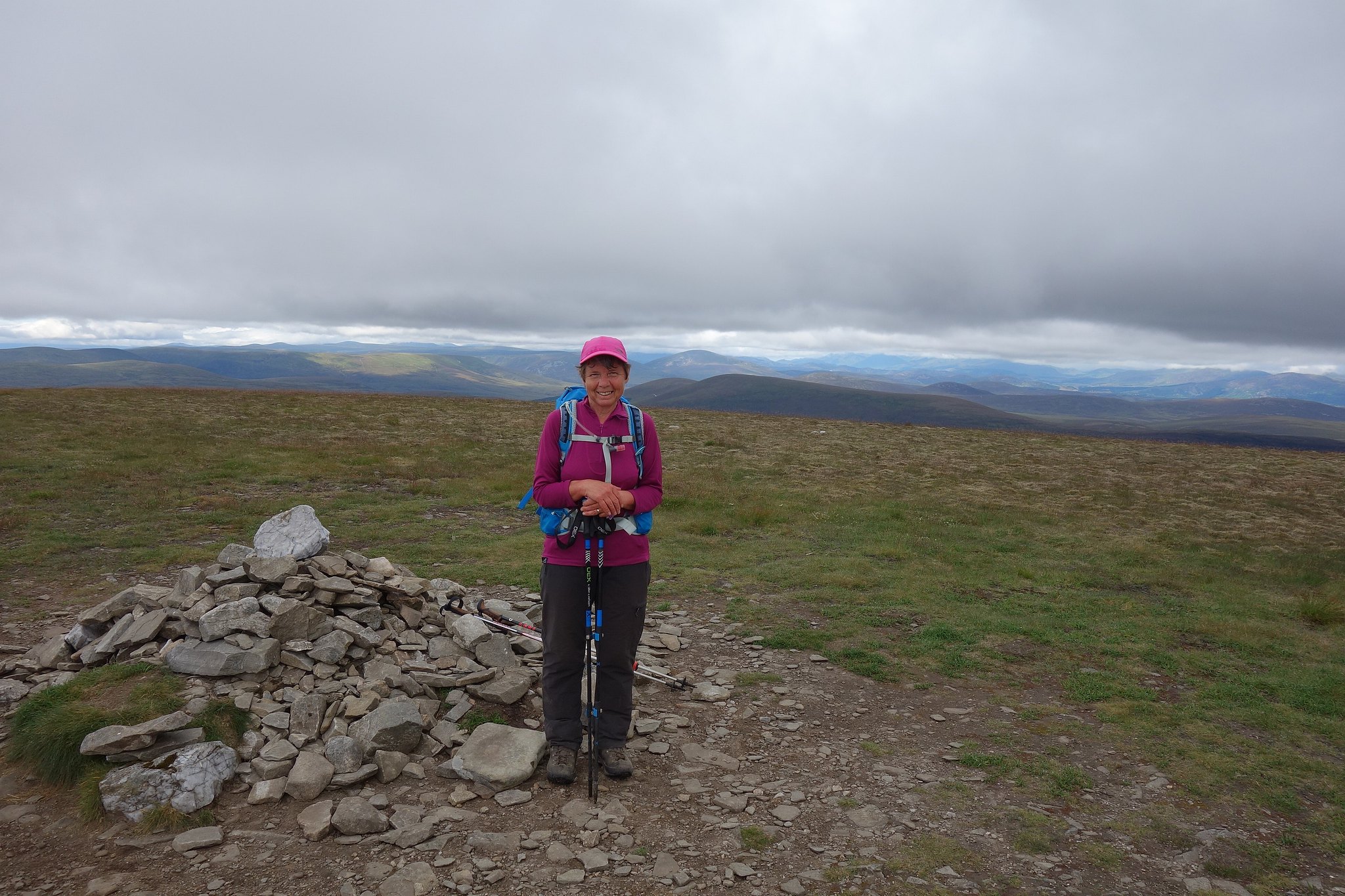 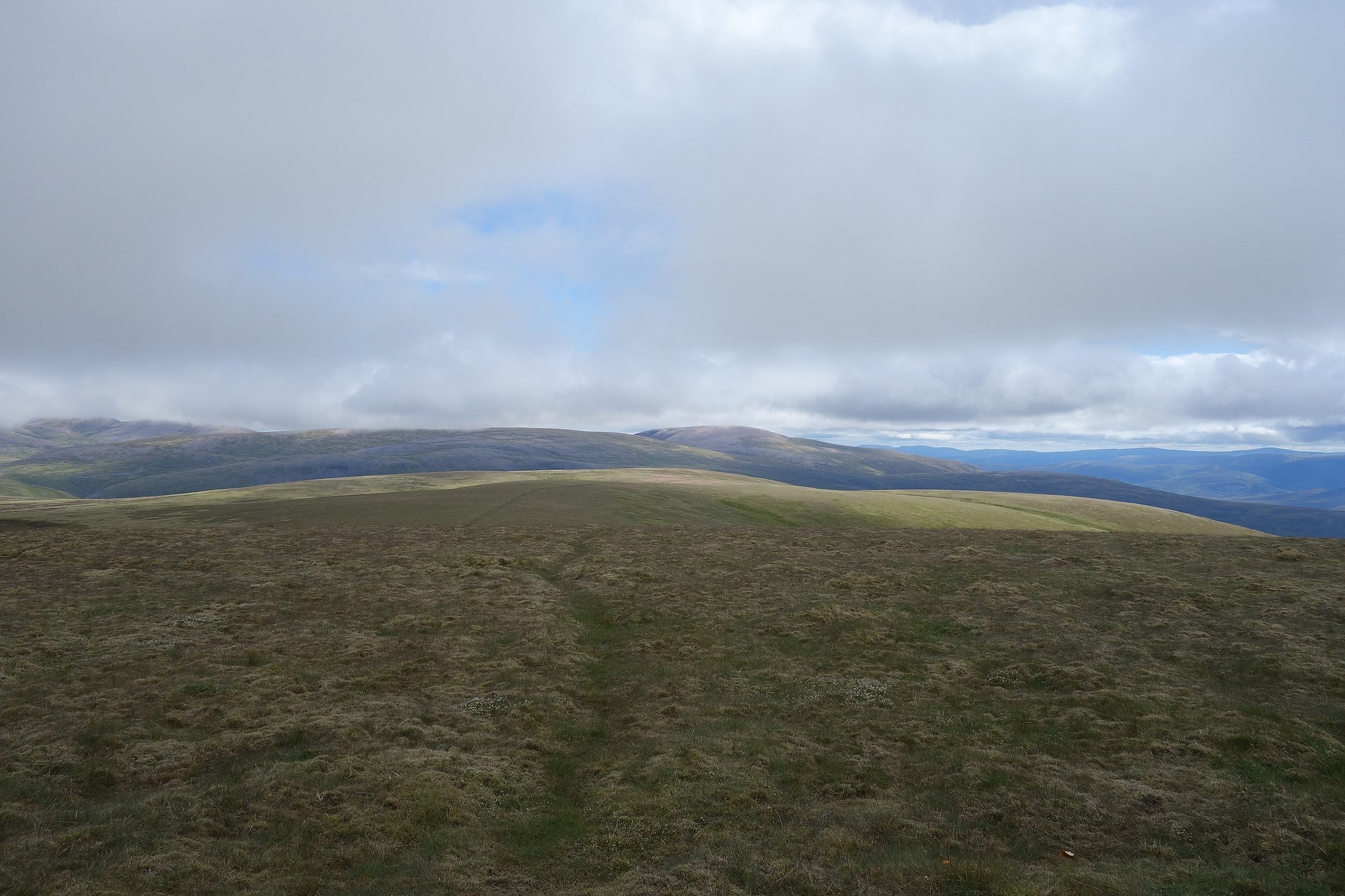 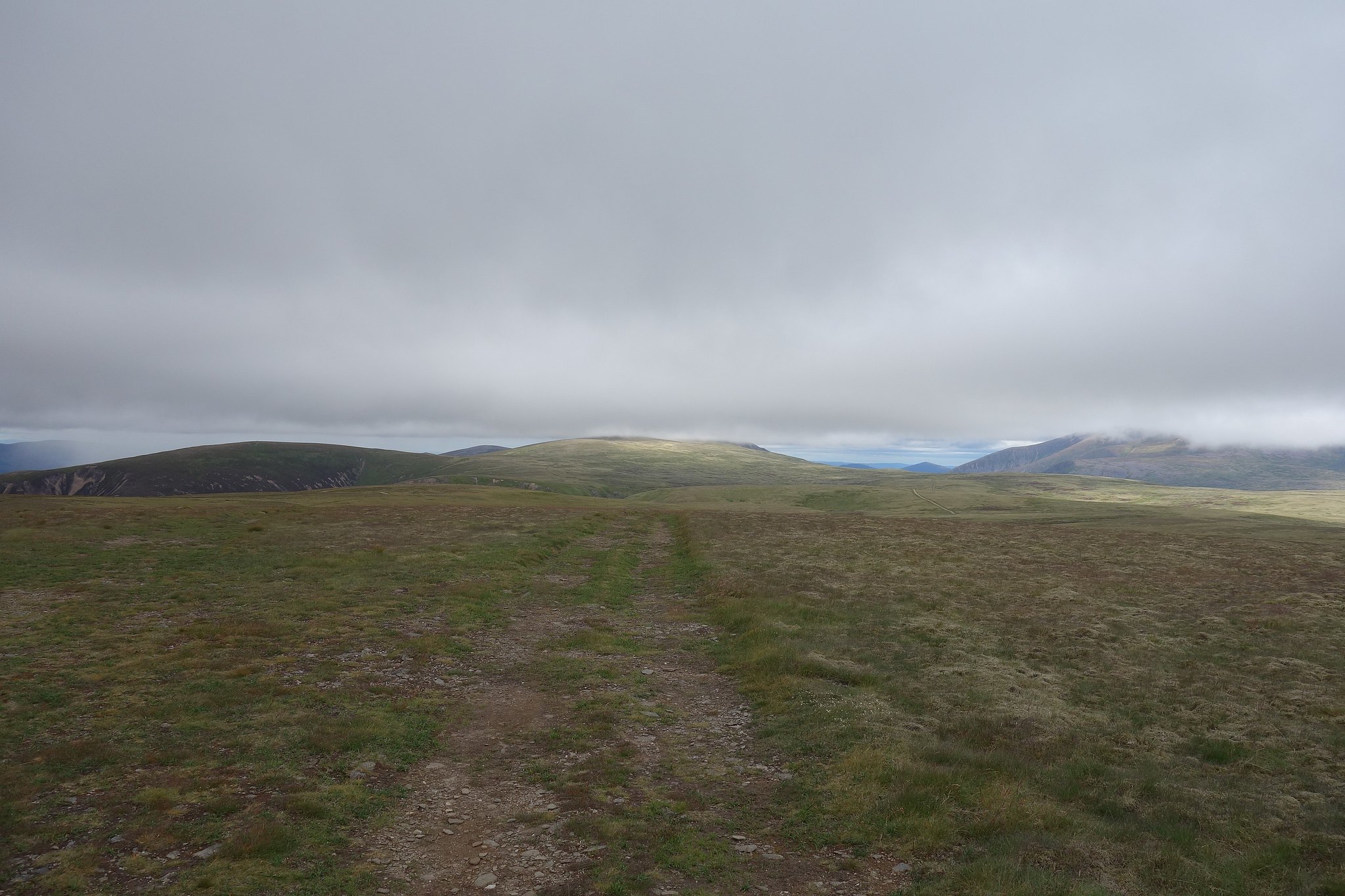 A lot of the higher mountains around us had cloud covering the summits so our views weren't as extensive as we'd have liked but we got the sense of the space around us, on the summit our views to the east were not brilliant, to the west and south, however, all was clearing and we were hoping for better views later on. 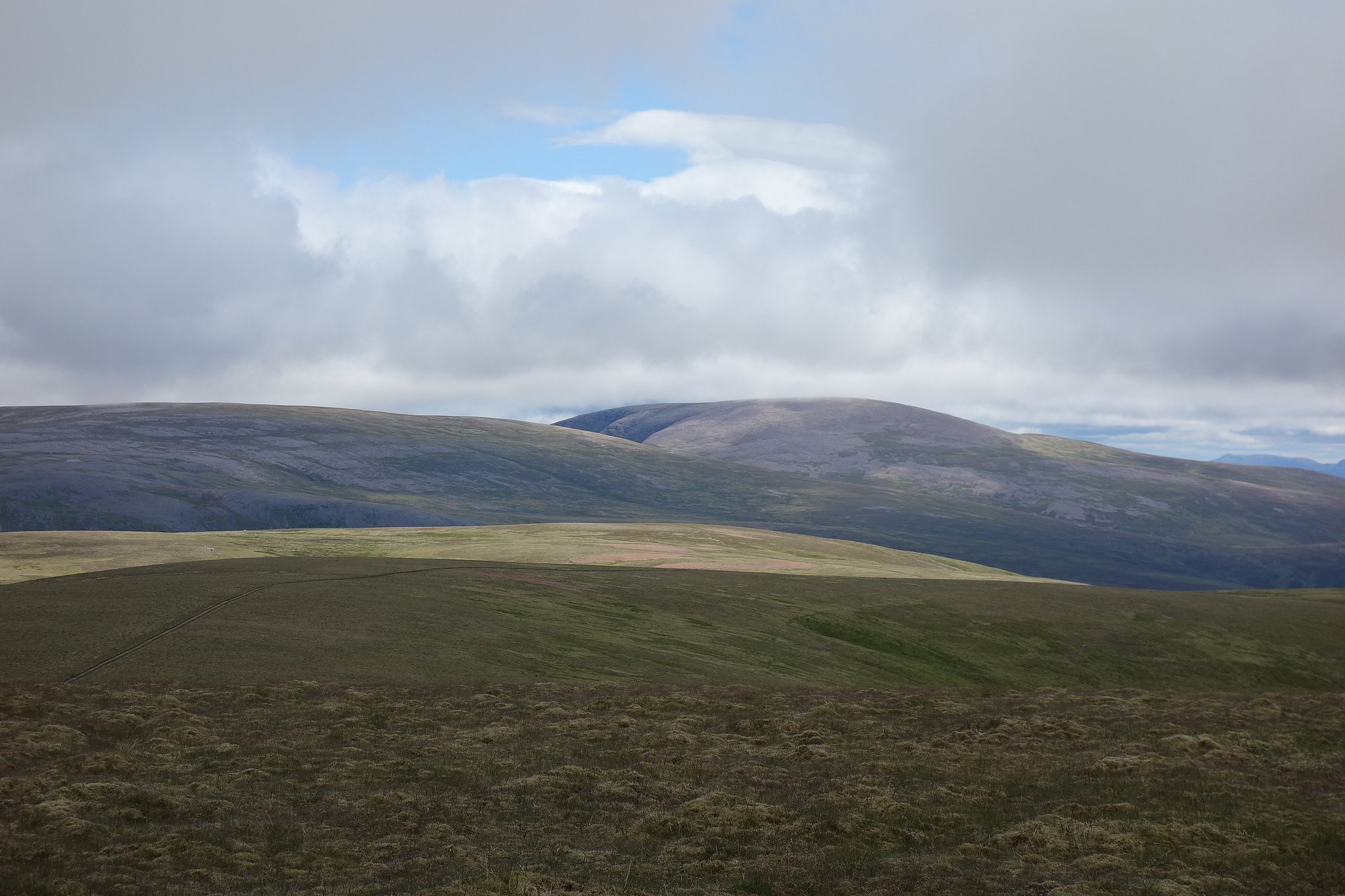 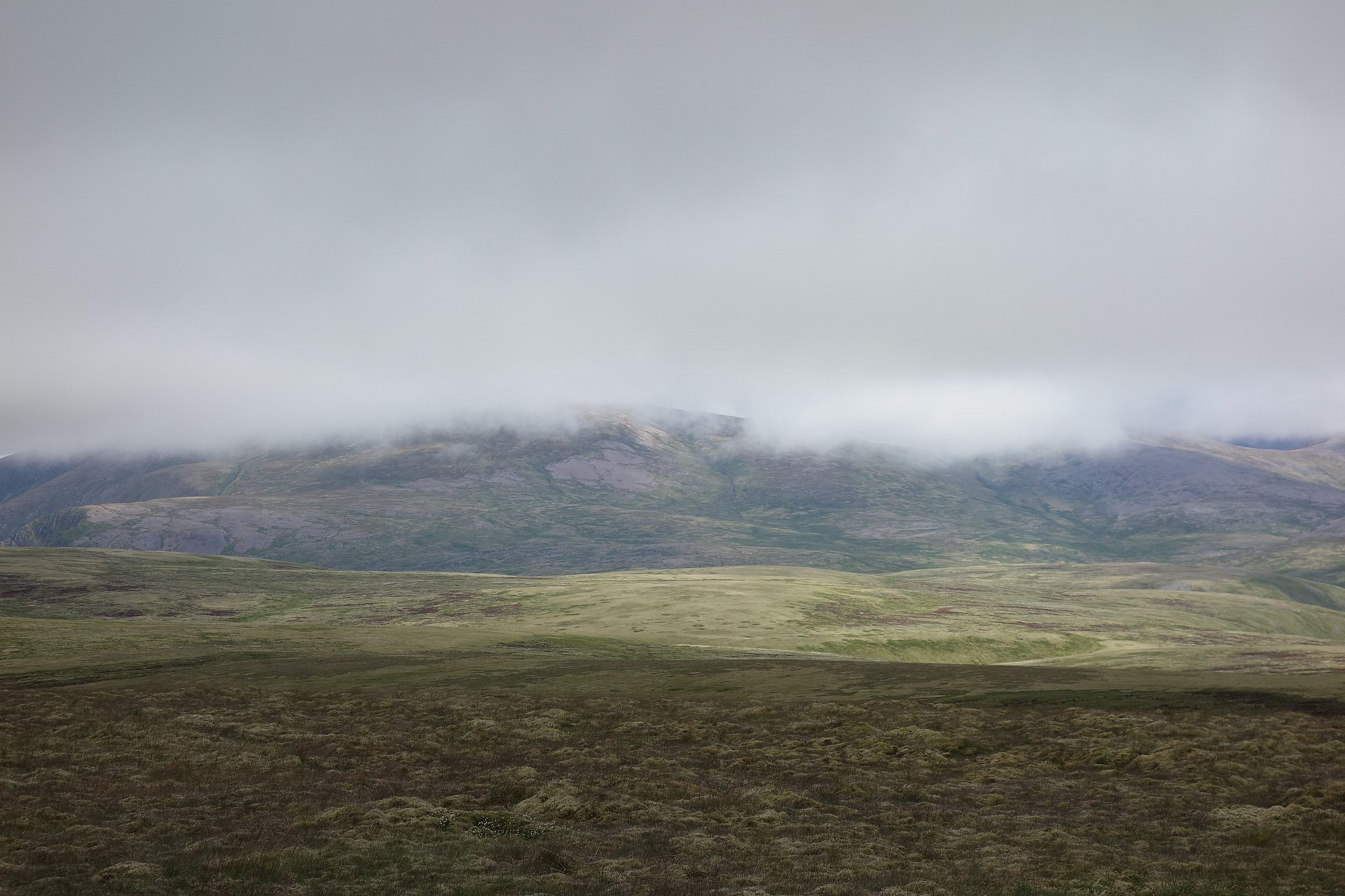 We left the summit of Mullach Clach a'Bhlair retracing our steps back to the landy track, there's a path that goes straight ahead here which cuts a corner off and rejoins the main track around NN883936. We had to stop to put our jackets on here we managed to encounter the only heavy shower of the day.
There's a junction on the track here, we went right and carried on following it as it travelled NE towards point 957m on the map crossing the Caochan Dubh on the way.

On the way the cloud was lifting, we were beginning to get the odd glimpse of Carn na Criche and the big mountains to the east. 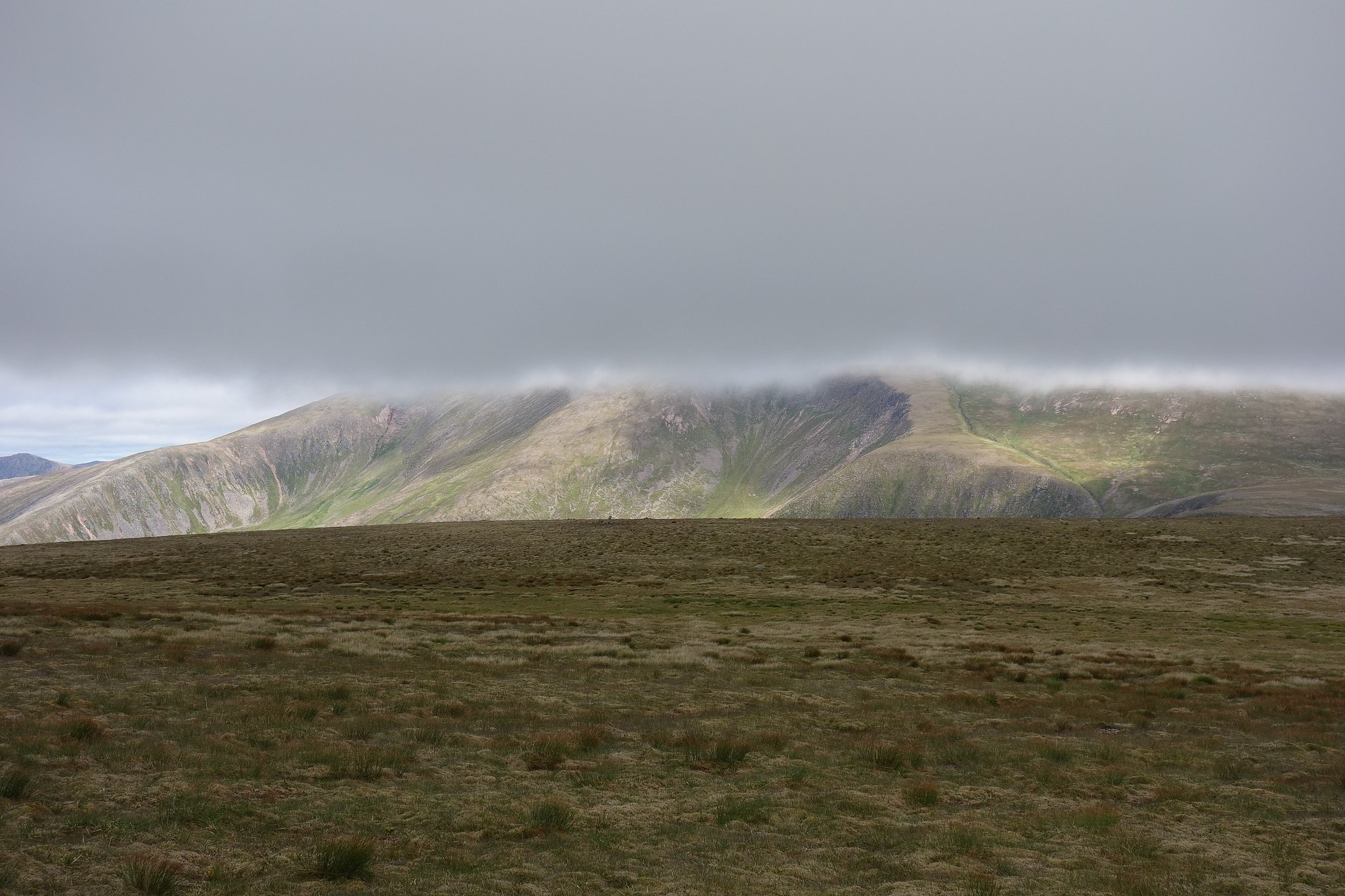 Just shy of the 957m point we left the track and headed for the shallow bealach between Carn Ban Mor and Sgor Gaoith, during any normal year this would be a bit squelchy, today it was dry, soft and springy, nice to walk on and a bit more direct.

The clouds were getting higher and higher by now, the views were getting better as we started the climb up Sgor Gaoith, there were a couple of gliders from the gliding club floating around and there was a group of mountain bikers heading for the summit, these guy's have a different level of fitness, I don't think I've got the strength or the stamina for that but these mountains are ideal for mountain biking. 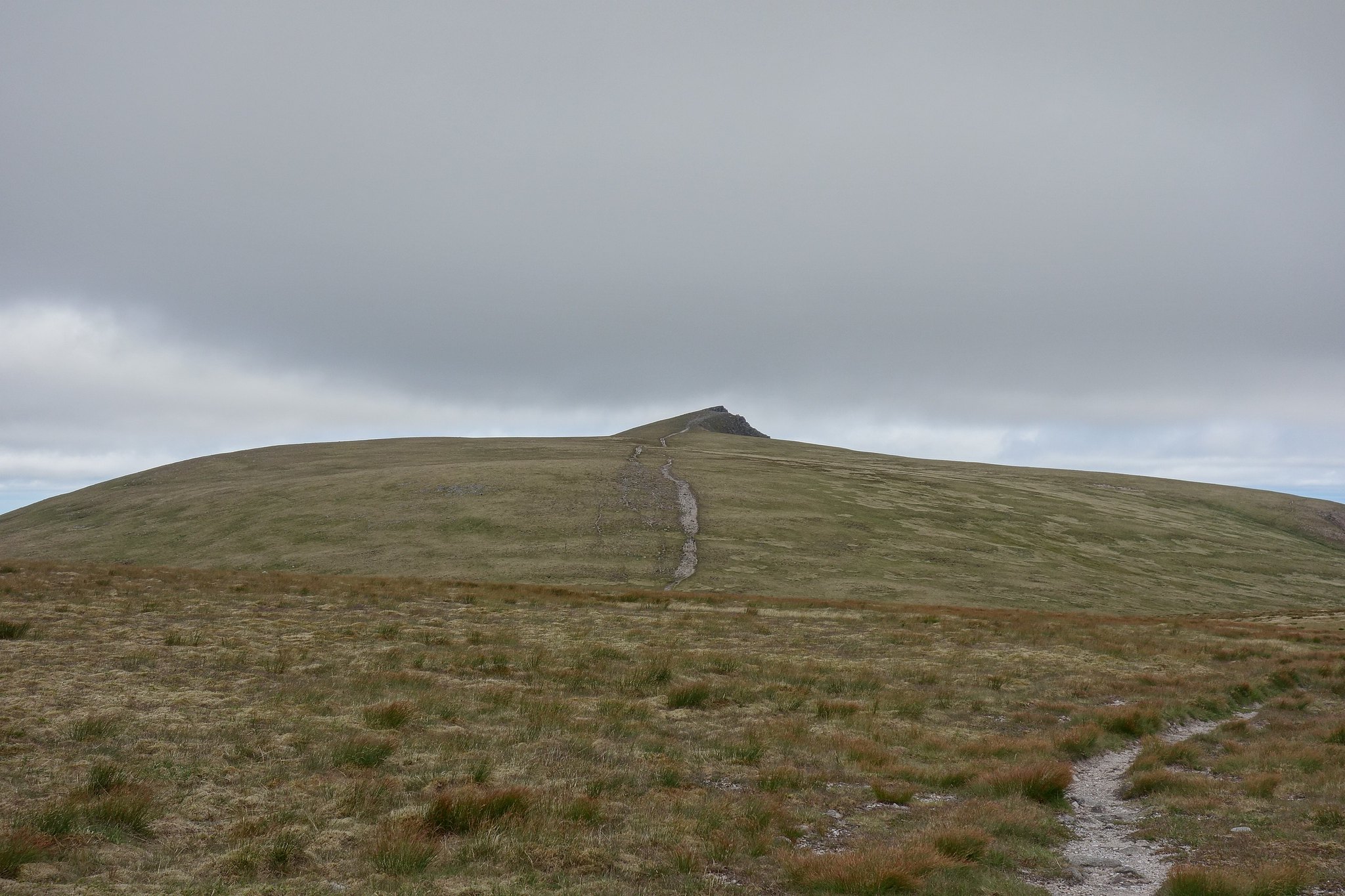 The summit of Sgor Gaoith is quite a contrast from that of Mullach Clach a'Bhlair, the view down to Loch Eanaich is impressive and very sheer, the bikers were just leaving as we arrived, without a second thought they just shot off down the path, pretty impressive, I'd be flat on my nose if I tried that.
The views from the summit were great, most of the mountains were clear of cloud now, there was a keen breeze on the summit so our planned picnic was delayed until we got lower down, after a photo session we set off for Carn Ban Mor, I'd read there's a shelter on it so that was our re-scheduled picnic spot. 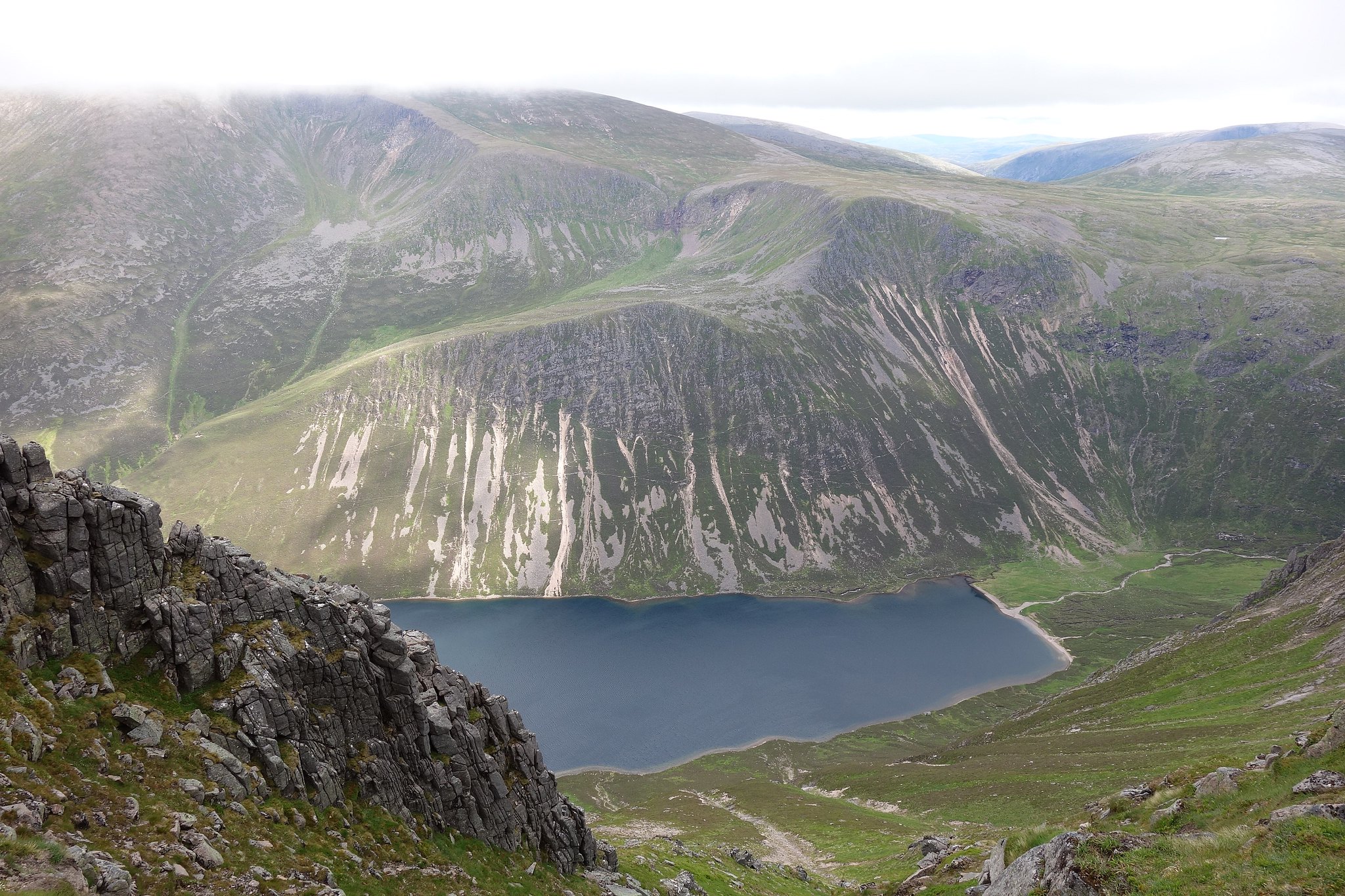 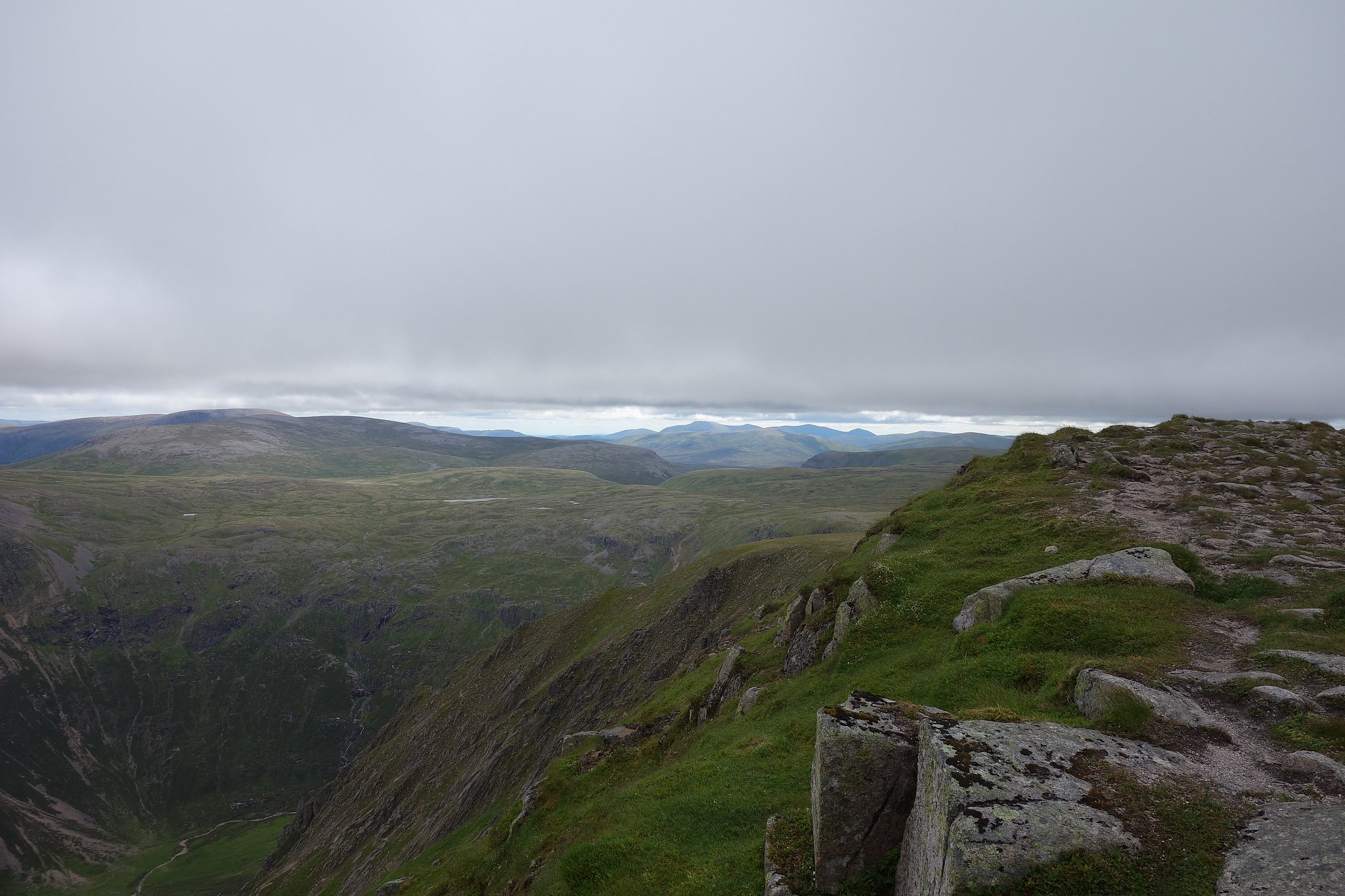 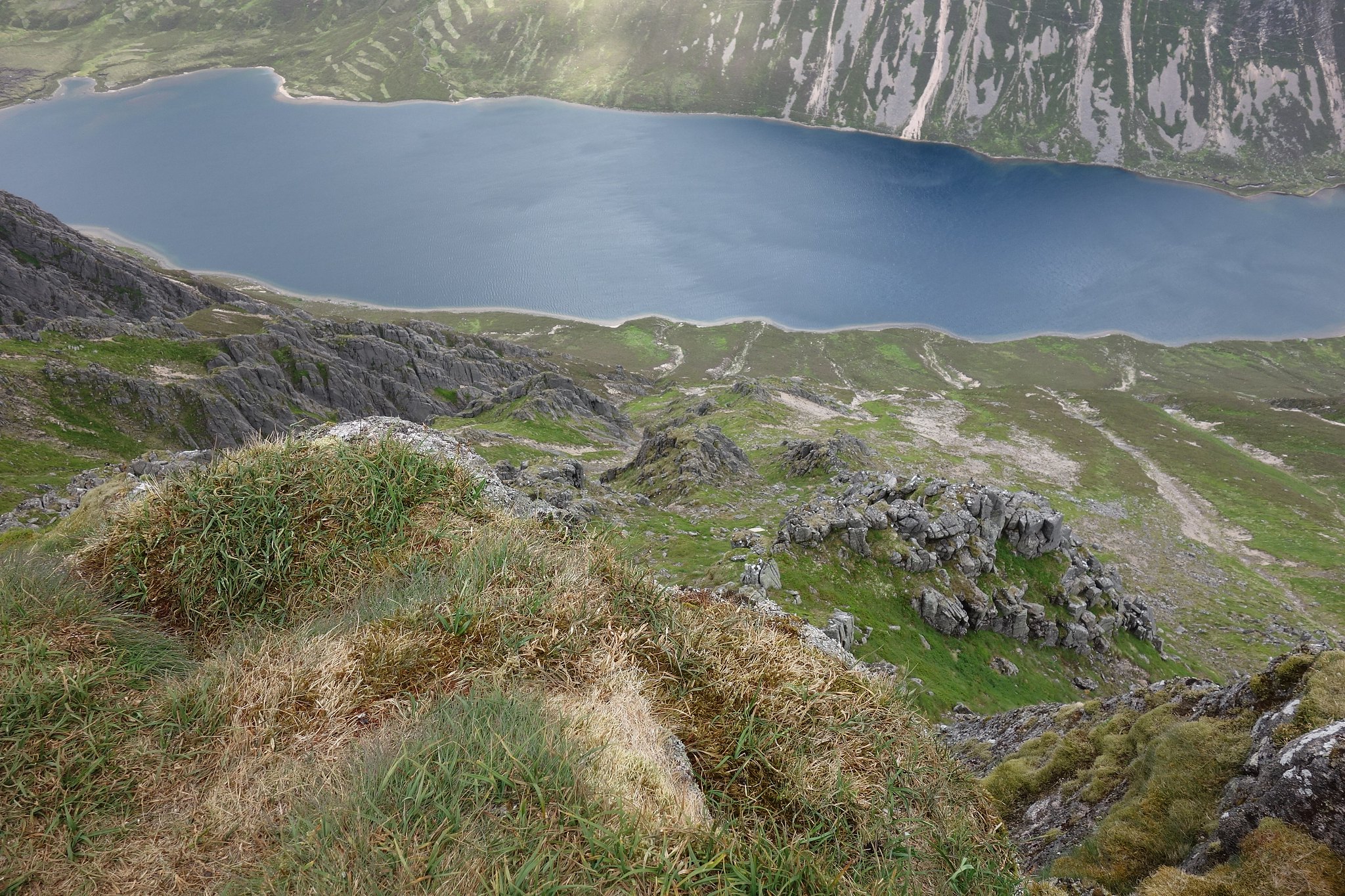 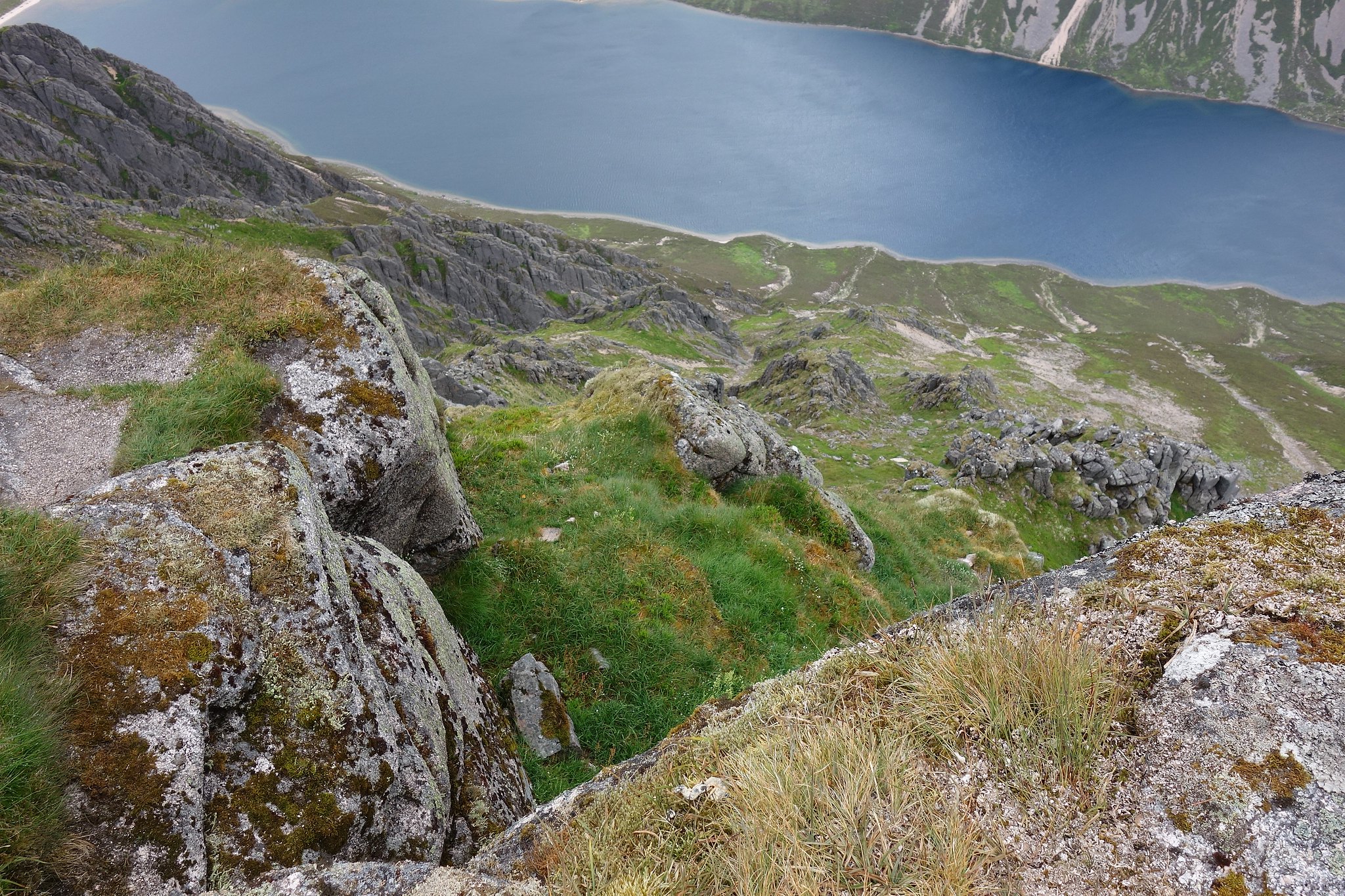 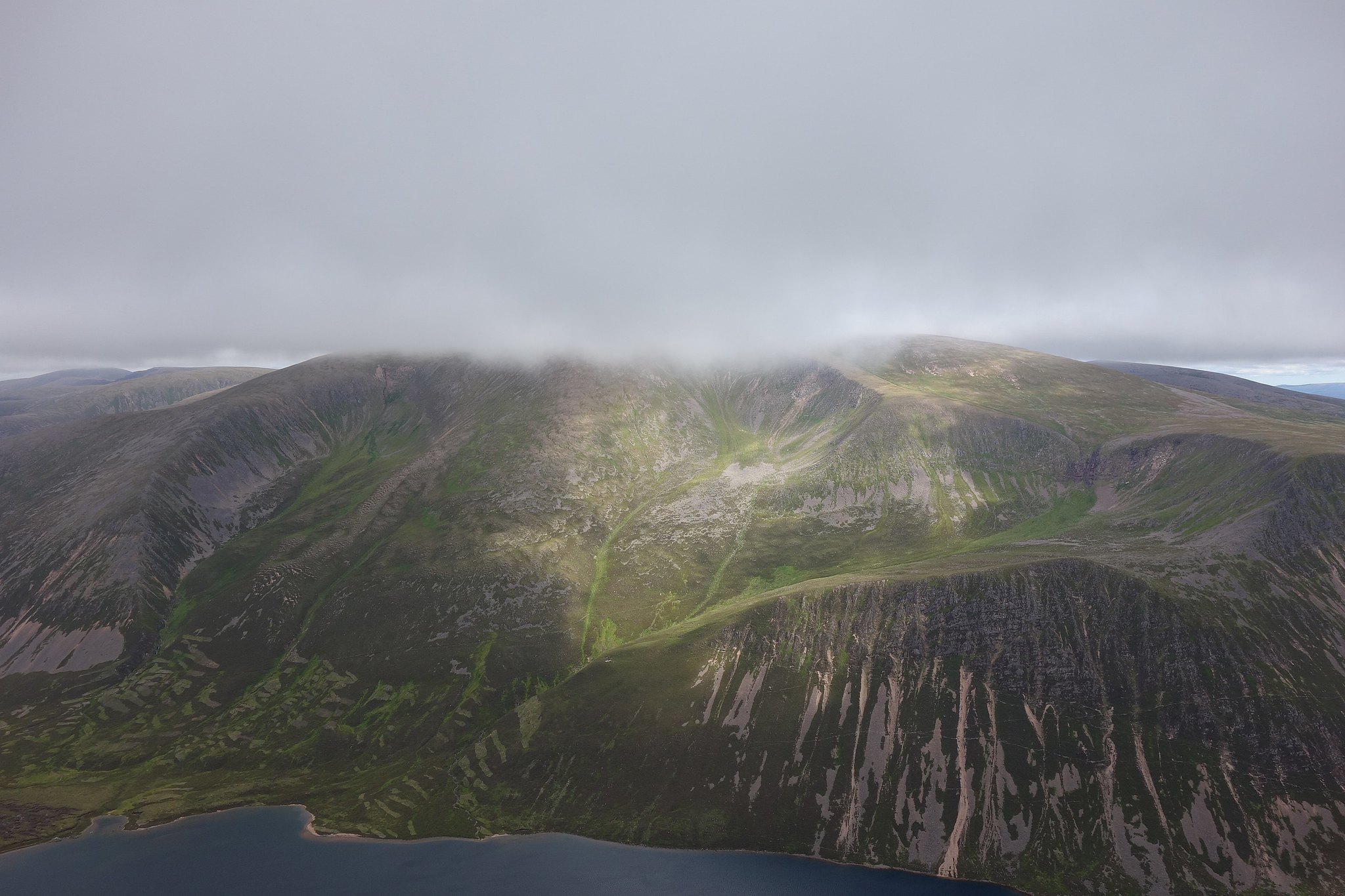 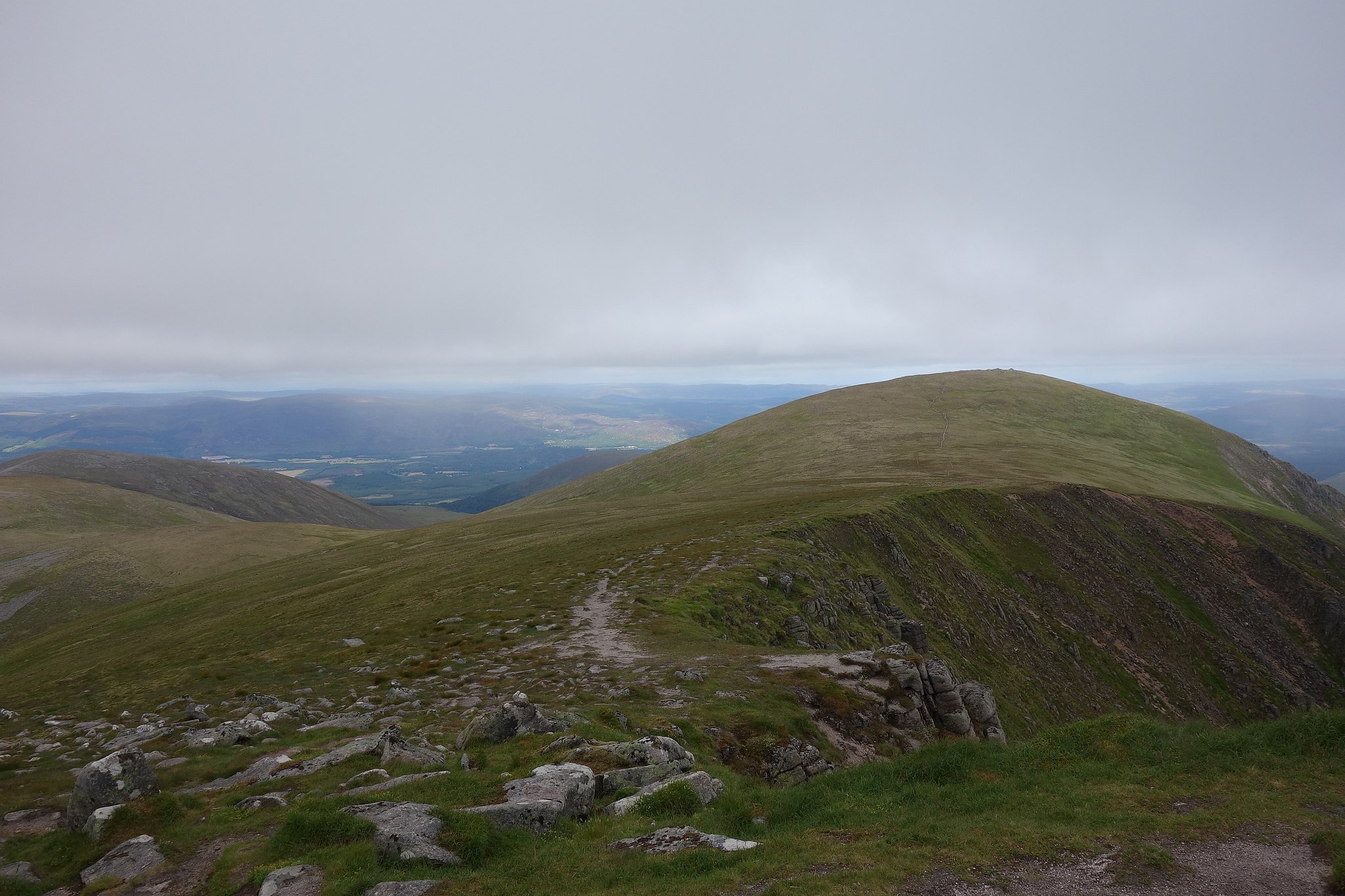 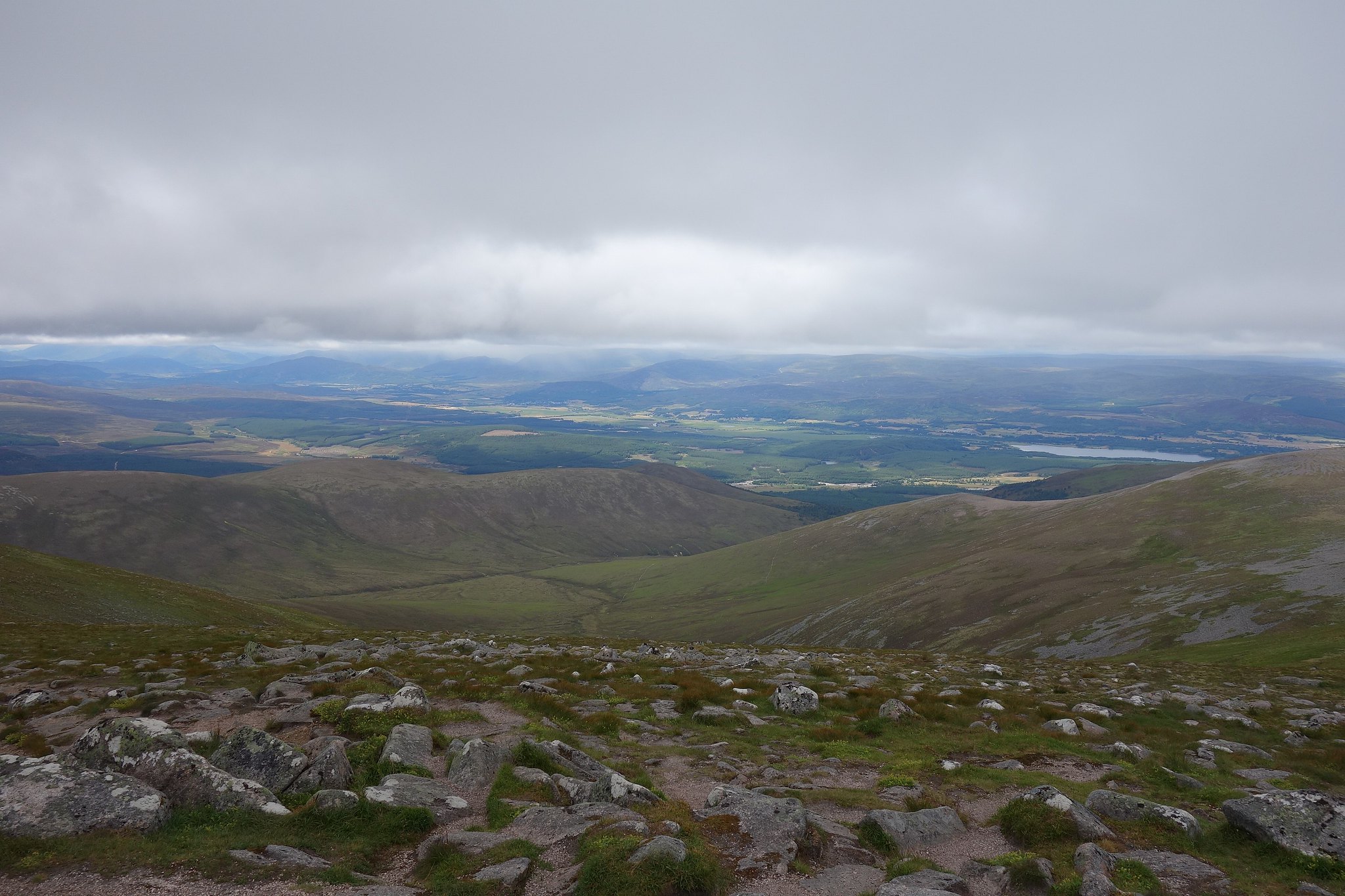 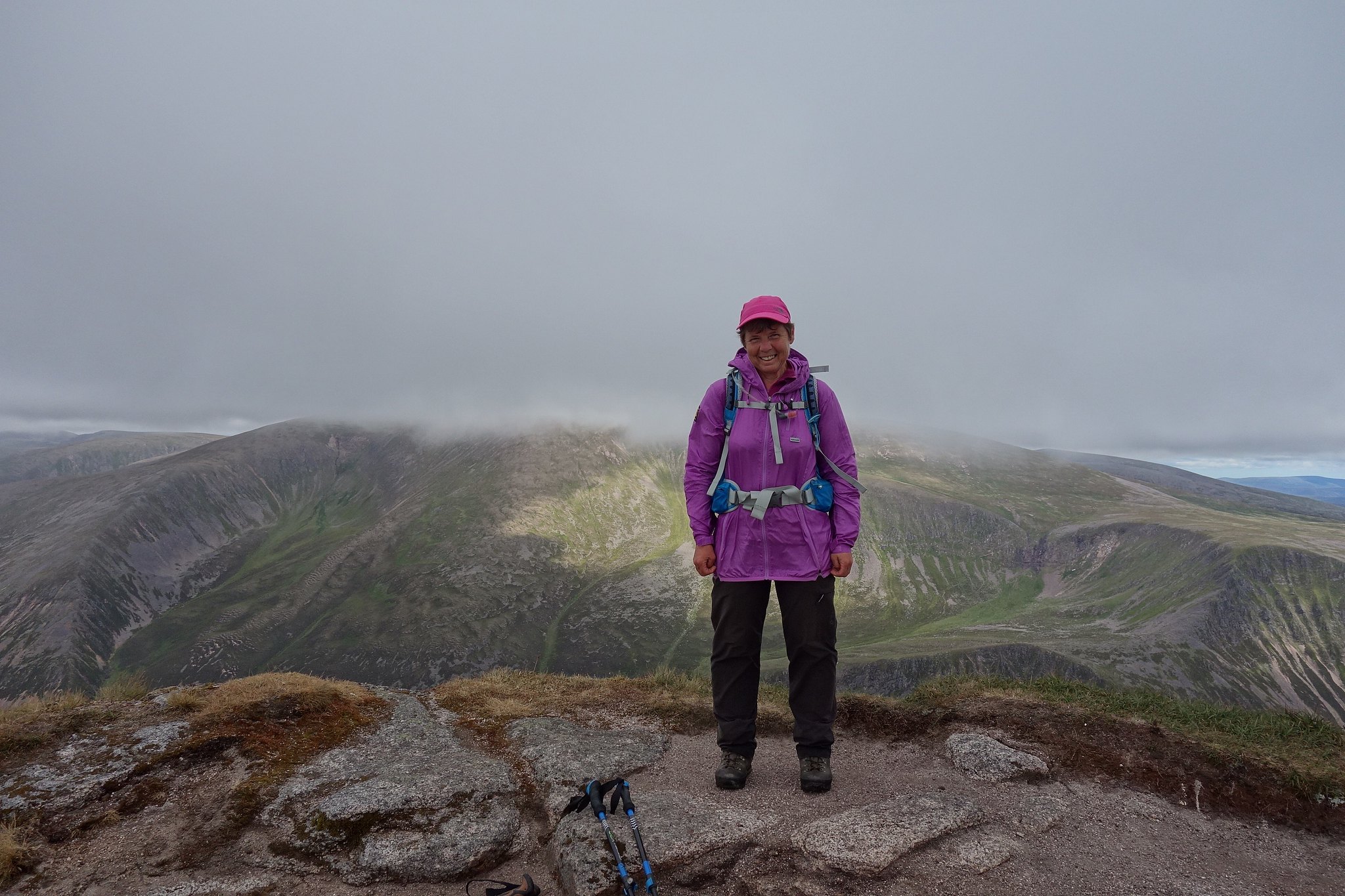 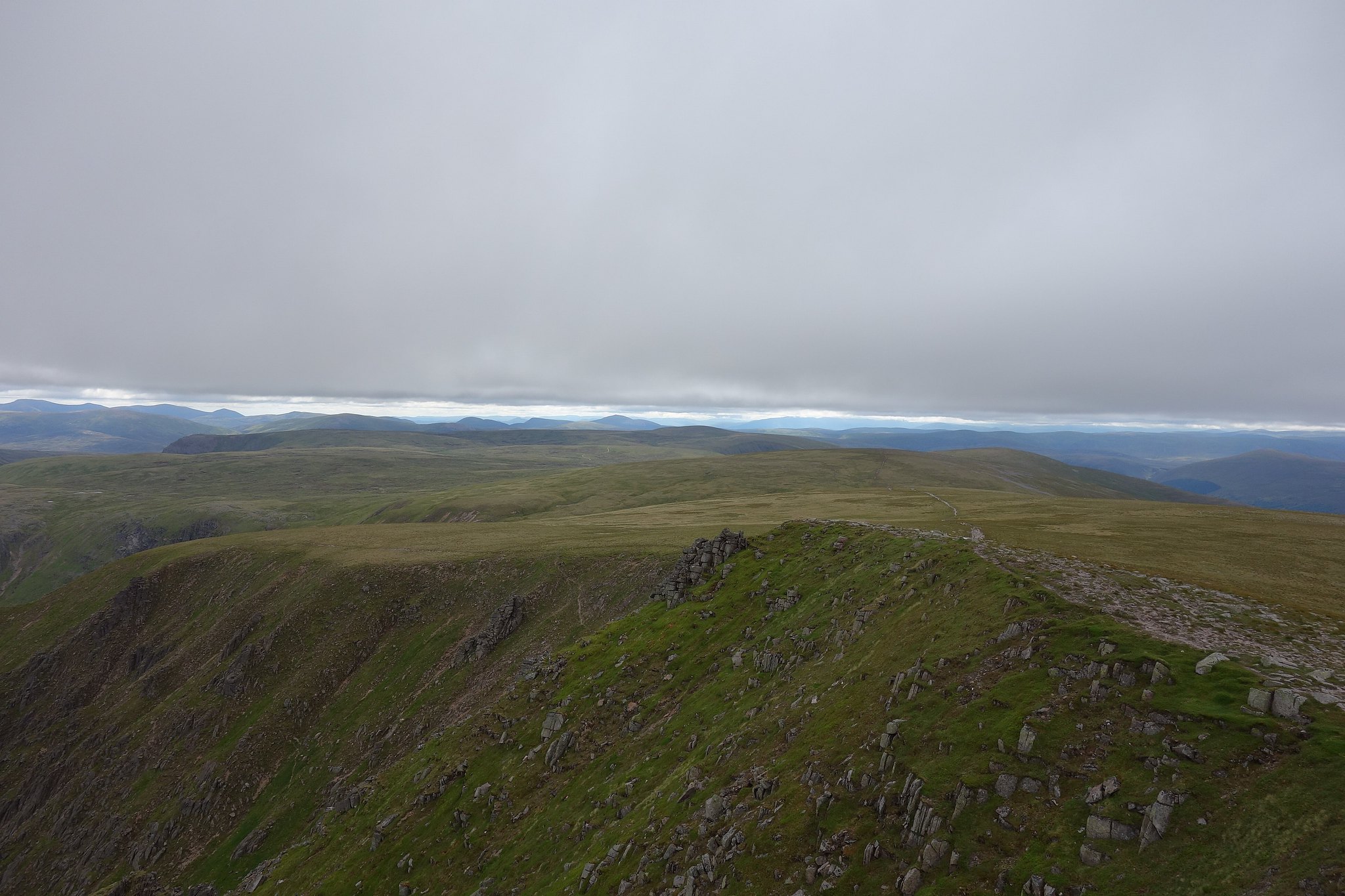 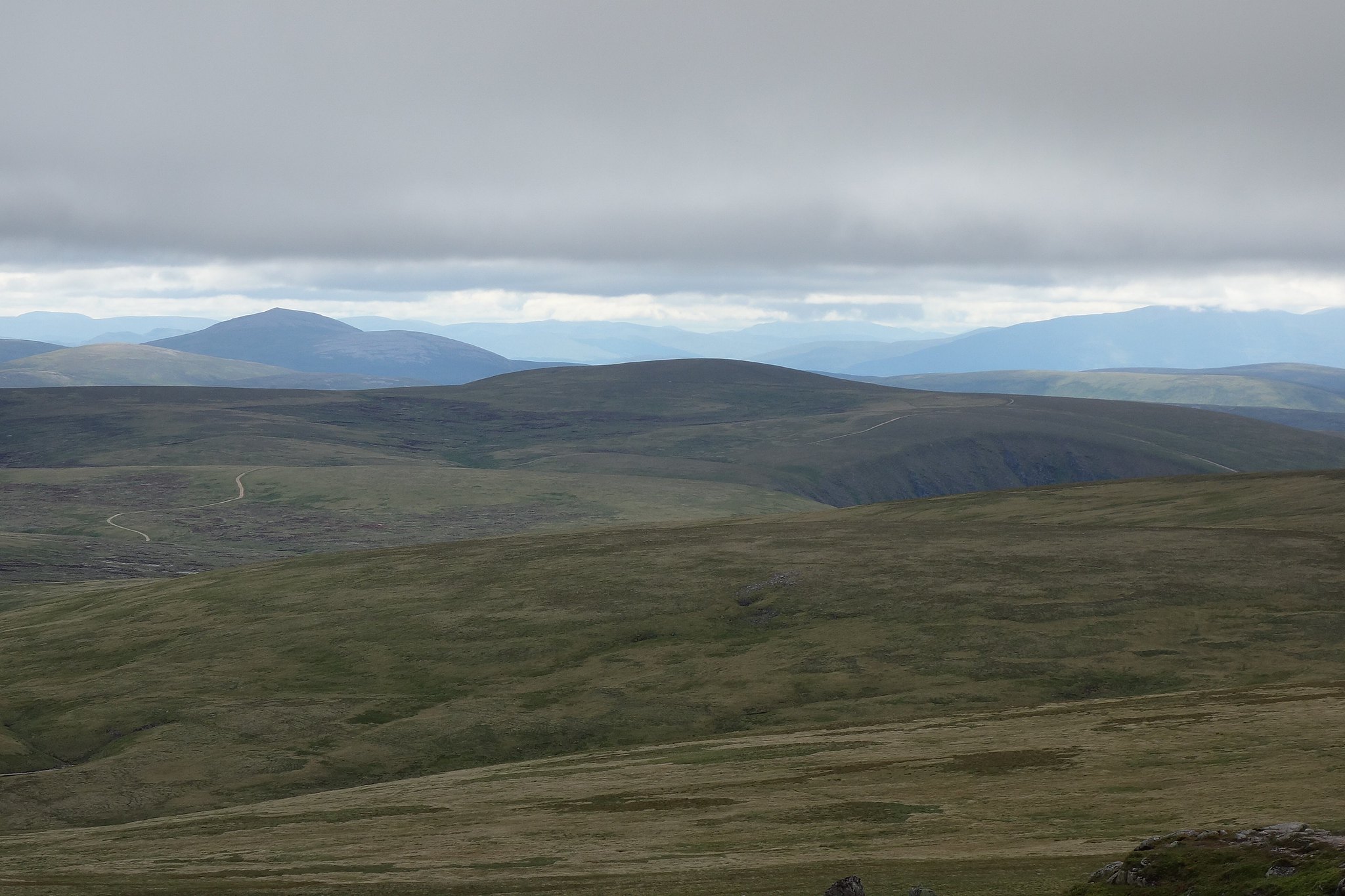 There is a shelter, it's got some well placed flat stones for comfortable seating as well, we had a late lunch and a long sit just looking at the views then set off for the walk back to Achlean. Like the bulk of the walk up to now the path/track back to the glen was well constructed and it made for a quick descent.

Looking Back on the descent. 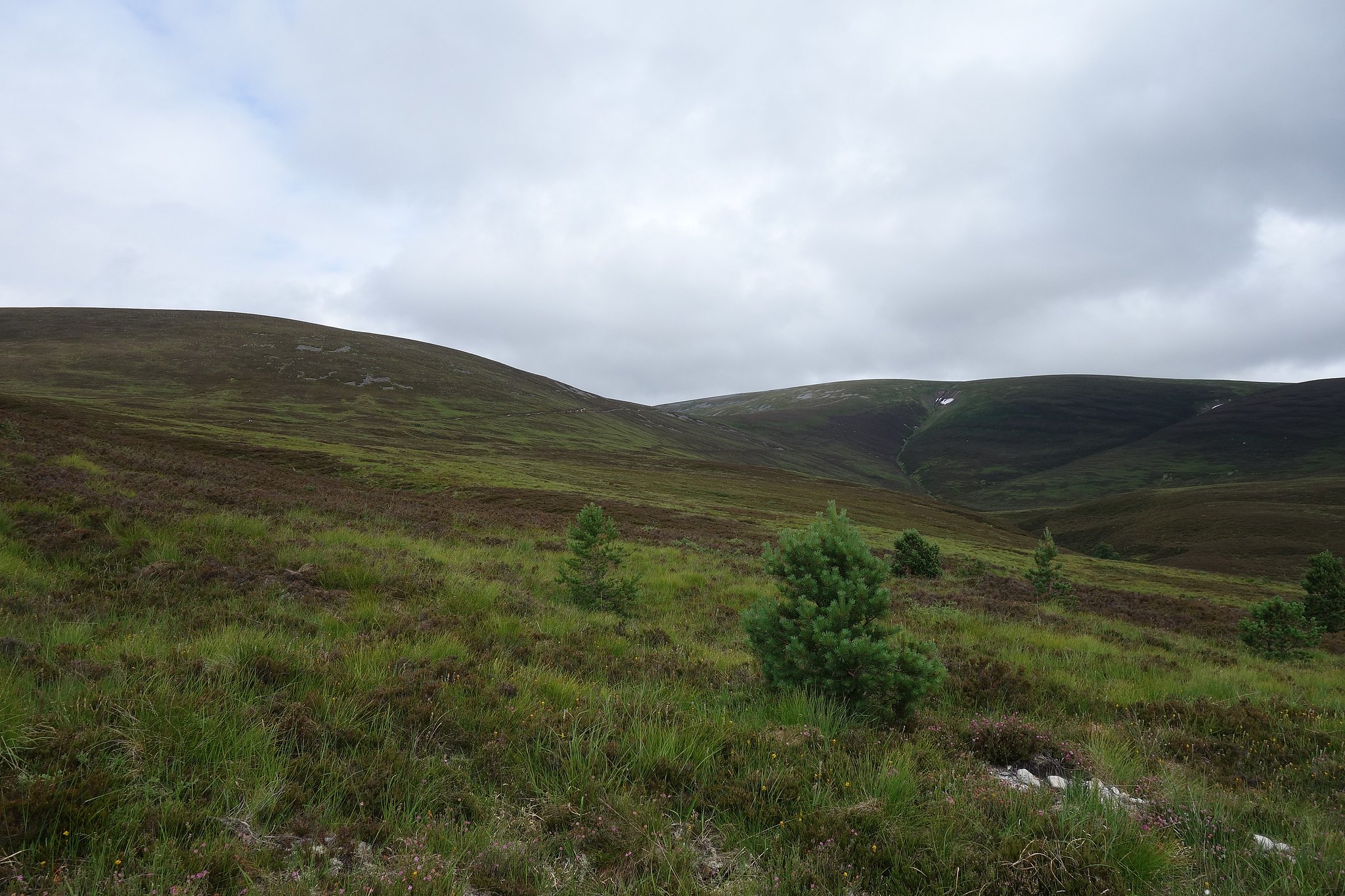 There's a fence with a gate in it entering the plantation near the end of the walk, up to this point we'd not encountered the dreaded cleg, as soon as we'd got into the trees they rallied their forces and struck, they're sneaky little blighters, they pounce when you're not looking, I was off, arms flaying like a windmill, I hates them.

Back at the car park seven hours after setting out, a really enjoyable start to the holiday, this is a great day in the hills, many thanks to the walkhighlanders who planted the seed, it's a good 'un, cheers.

Re: Perfect weather for a Glen Feshie double.

Looks like a lovely walk Martin, nice pics too, especially from the summit of Sgor Gaoith!

It's a shame the clouds were covering the tops of the bigger hills, the same thing happened to me in Glen Coe a few weeks back, but at least you got a great view of Loch Eanaich.