Living in Orkney you spend a lot more time thinking about climbing hills than actually climbing them, so I'd spent weeks plotting my first Munro ascent. Many alternatives were mulled over before I settled on the Drumochter Pass, where the WH route up Geal-charn and round to A'Mharconaich, starting from a high point on the A9 looked to be the perfect place to start for a chubby 57-year-old whose recent hill-walking has consisted of taking down the weak, small and lesser known Marilyns.

With a spell of sparkling good weather enveloping the whole of Scotland at the start of July, I was eagerly anticipating a sunshine day out with views for miles. The weather forecast had other ideas with low cloud predicted over much of Scotland and one site even predicting thunderstorms.

As I crossed the Pentland Firth to Scrabster, I decided to just turn up and see what it was like - I could always head south and try something smaller if need be. Landing just after 8am, I was at Balsporran Cottages by 11.45 for a good news, bad news situation. Good news, Geal-charn was clear. Bad news, A'Mharconaich was completely covered in cloud.

I decided on plan B - climb Geal-charn and head back along the track from the bealach on the south-west side.
I don't need to go into detail on the route, but it was one of the most enjoyable walks I've had in Scotland. Geal-charn is described elsewhere as a featureless lump, but walking up it was great fun - like a sub-200ft Marilyn only bigger. In fact, it was a damn sight more fun than one or two subs I've gone up this year (I'm looking at you, Beinn Chreageach - North Skye).

Anyway, the track that goes about a third of the way up was a bit dusty and loose after the dry spell, but the going was easy further up and I was at the (partly rebuilt?) cairns overlooking the A9 in under an hour and reached the summit about 20 minutes later.

Cloud blew in and away around the hill, but the summit remained clear and there were atmospheric views over Loch Ericht and Ben Alder, but A'Mharconaich remained solidly clagged.

After about 20 minutes of pictures, coffee, biscuits and huge self-congratulation I headed slowly downhill, thoroughly enjoying the views and the regular sightings of mountain hares.

By the time I was halfway down to the bealach, the cloud had cleared away from all but the very top of A'Mharchonaich, so plan A was back on. I was on such a high from climbing my first Munro that I barely noticed the ascent of my second, the summit of A'Mharconaich being at least partly clear by the time I got there.

Another 25 minutes spent mostly trying and failing to get some decent pictures, then resisting the urge to go across to Beinn Udlamain and I was on my way down, a descent that took considerably longer than I expected and in normal conditions might prove to be pretty boggy lower down. Cutting across to the left and over the burn to the track as soon as possible is a good idea even in dry conditions.

I was back at a deserted car park by 5.30pm at the end of a cracking afternoon out that - in good conditions - I'd recommend to any walker of moderate ability and confidence.

Geal-charn maybe could and should be on any list of easier Munros. Featureless lump it may be, but now it's my featureless lump. I may even get a t-shirt. Always good to know you're headed in the right direction. Familiar view past the B&B from the start Cairn about two-thirds the way up Geal-charn 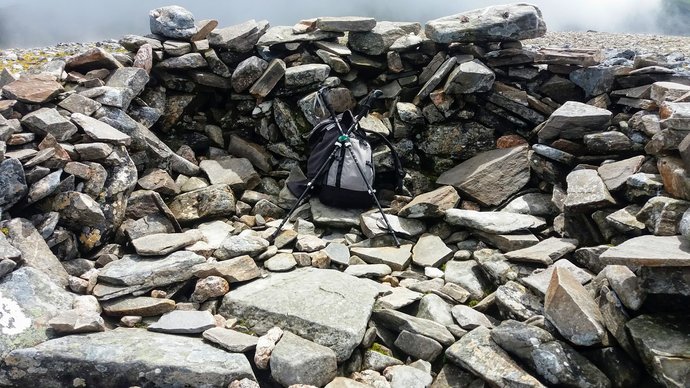 Looking west from the summit of Geal-charn All of a sudden - A'Mharchonaich is clear Looking south towards An Torc from the lower slopes of A'Mharchonaich Last look back at the hills