This description covers three separate walks in the one area.
Saturday 14th July - Meall Chuaich
Thursday 19th July - Creag Ruadh to Druim nan Sac Ridge
Tuesday 24th July - Coire Cuaich and A'Mharconaich
I don't think I'd ever been up Meall Chuaich in good weather, or, had any sort of view from the top. This current spell of weather has been a Godsend and I thought I'd better take advantage of it and do something and settled on Meall Chuaich. The ascent, from layby 94, was up the Allt Cuaich until just before the power station where I headed over to join the main track where it crosses over the aquaduct.
From there it was a normal ascent to the summit of Meall Chuaich at 951m. On the descent I skirted around the head of Glac an Tailleir to Stac Meall Chuaich at 822m to see if it would be possible to descend to the North East end of Loch Cuaich and make a return by the track running along the Western side of it. The descent looked extremely steep and I couldn't actually see where the hill met the floor of Coire Riabhach. I descended by the normal route with the intention of coming back and getting a better look at the West face of Meall Chuaich.
Five days later and I was back at layby 94. This time I stuck to the main track, following the aquaduct, until the bridge crosses it just before the power station. TIME TO LEAVE THE MAIN TRACK

From there I descended North to cross the Allt Cuaich and ascended slightly to a gate in the fence. Once over the gate I ascended North North East following ATV tracks up past 14 numbered grouse butts. The going is easy and a slight change of direction to North East leads eventually to the summit of Creag Ruadh at 658m. SUMMIT OF CREAG RUADH I What follows is a gentle, approximately 2.5km long ridge stretching away to the North East. After about a kilometre it drops to a low point of 589m before rising to the summit of Druim nan Sac at 644m. LOOKING BACK TO CREAG RUADH FROM NEAR DRUIM NAN SAC

Carry on North East from the summit until you can easily descend to the track coming up from Coire Riabhach at about 530m. DESCENDING FROM DRUIM NAN SAC TO HEAD OF TRACK

From there it is a simple case of descending down the track to the Northern end of Loch Cuaich at 400m. LOOKING DOWN TRACK TOWARDS LOCH CUAICH

From what I'd seen as I traversed the Creag Ruadh to Druim nan Sac ridge and walking back along the West side of Loch Cuaich I don't think it would be prudent to attempt to descend the West side of Meall Chuaich to pick up the track at the side of the loch. To be safe you would have to descend a good bit to the North of your target and then cross a couple of kilometres of what looked like tussocky and boggy ground. Once I met the loch it was just a case of following the main track back to the car.
Another five days later and I was heading just outside Newtonmore to a place called Auchmore to walk Creag Dhubh. It turned out that there were roadworks on going at my starting/parking point which was full of council vehicles.
What to do? Back to layby 94 which sits at about 350m. I took the main track up and along the side of the aquaduct to the power station. From there I followed the track round to where you normally cut off to ascend Meall Chuaich at 415m. CUT OFF TO MEALL CHUAICH ON LEFT

I had never followed this track to its end before but did so this time. The track ascends roughly East up Coire Chuaich for 3.0km to a col at a height of 610m separating Meall Chuaich from Bogha-cloiche. 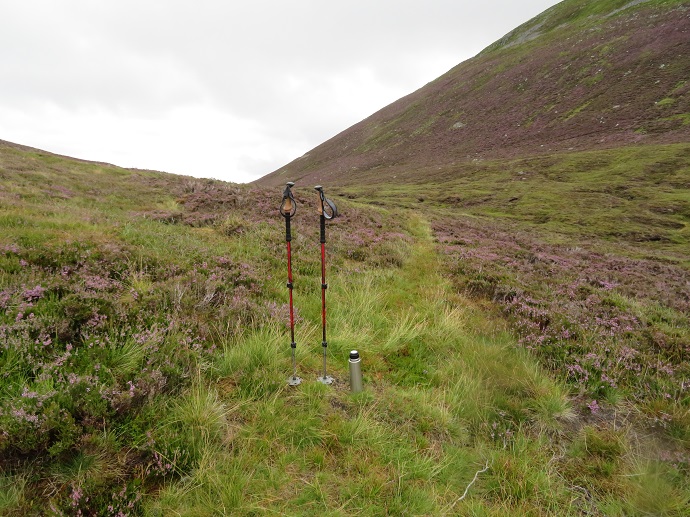 The map would have you believe that when the main track ends at the col a single track takes over, it doesn't. It is rough and unpleasant ground. You can just make out the single track ascending from North to South up the Western flank of Bogha-cloiche. END OF MAIN TRACK UP COIRE CHUAICH i

The track once you are on it is about the width of a pair of boots with the lower part covered in slippery heather roots, however, it does ascend at a fairly decent angle. The path tops out at about 780m and heads South hugging the head of Coire Chuaich. I was tempted to try and get to the highest ground and follow that round to the summit of A'Mharconaich. Bad decision. It's rough and crappy ground and I soon found myself making my way back
to the head of the corrie. From Creag Tharsuinn I ascended slightly South before turning West and ascending West to the summit of A'Mharconaich at 882m. From the summit of A'Mharconaich I headed roughly South for a kilometre towards Meallan nan Uan with a large waterfall seen in far reaches of Coire Chais. WATERFALL IN SW CORNER AT HEAD OF COIRE CHAIS

I then descended North West to Creag Liath at 812m. The 1:25,000 map shows a track running all the way from Creag Liath down over An Sguabach to meet the Allt a' Choire Chais at approximately 410m.
Looking from the summit of A'Mharconaich across Coire nan Dearcag to Creag Liath there did appear to be a track, however, when I got over to Creag Liath it was like it had disappeared!! I do think the 1:50,000 map gives a better indication of the length of the track up Coire Chais although I found it to start right down at the burn beside a small dam. LOOKING DOWN START OF TRACK FROM DAM IN COIRE CHAIS

(See also pictures taken of this area from the previous walks)
From there the track was followed to meet what would be called the main track halfway between the power station and Loch Cuaich. Then it was just a case of a hop, skip and jump back to the car.