I moved to The Netherlands approximately two and half years ago now in the beginning of March 2016 for work. I'm sure many of these forums will be shaking their heads in dismay that a Scot born and raised in Aberdeen, mere minutes from the tantalising edges of the Cairngorms, would move (a) so far away and (b) to somewhere quite so flat and lacking in Mountains..

I too wonder ponder the two above points very often - usually whilst surfing Skyscanner trying to navigate the extortionately high prices for the 55-minute flight between Amsterdam and Aberdeen. (Pro Tip: do not sit in your seat on that particular plane and calculate how much you are paying KLM per minute for the privilege of ferrying your homesick backside to the greatest little country on earth for a weekend of Munro Therapy.

It was in such moment during an afternoon flicking between Skyscanner (other flight comparison sites are available...!) and the Walkhighlands forums that I read a discussion regarding the Lairig Ghru (https://www.walkhighlands.co.uk/cairngorms/lairig-ghru.shtml) - potentially my favourite place in Scotland (big call, i know). I'd walked through the Glen from Linn of Dee back up to Coylumbridge (and cheated my way hitchhiking back to Aviemore again) previously with my Father and Grandfather when i was approximately 16. Three generations of the same family walking through that Glen - with my Grandfather 71 at the time - left quite an impression on me and i'd decided to come up with a route to bag some of the +4000-footers surrounding the Lairig with my two best mates this year (both smart enough to still live in Scotland).

We chose a weekend, took the obligatory leave days from work, emptied the contents of the wallet into KLM's outstretched hands and thought we'd planned it perfectly in the middle of the most spectacular run of Scottish weather for a very long time. I'd walked the White Mounth Munros (https://www.walkhighlands.co.uk/cairngorms/white-mounth.shtml) and run the Tarmachan Ridge (https://www.walkhighlands.co.uk/perthshire/meall-nan-tarmachan.shtml) a few weekends before and achieved the appropriate level of sunburnt nose.

Both starting from, and finishing from, Glenmore Visitor's Centre turned out to be a solid choice. Alan, in charge of the Visitor's Centre, is himself a keen walker and was perfectly good about leaving the car in the car park overnight whilst we were out under canvas. The other option discussed would have been starting and ending at the Linn of Dee Car Park, however that would add approximately another 16km to your overall route walking in and back and switch the order of the sides of the Glen you attack first/second.

Naturally, the cloud base decided to be...well, very present during the entire route and - being quite so high for the vast majority - you can expect to find yourself in the clouds for quite a considerable amount of time. This limited the amount of (quality summit view-illustrating) photos that were able to be taken during the route and, as such, is reflected in what's (not) attached to this post.

The walk up to the Cairn Gorm Ski Centre Car Park at around 650m is obvious and fairly simple with well-marked trails - though a small landslide nearer Glenmore itself had "shut" one of the popular paths if you weren't up for a tiny bit of offroading early on. We had elected to ascend via the Fiaciall a' Choire Chais but - as you can see from the GPX file - we took the decision to climb up the side away from the Railway to give us a better view of the ridge itself. On a clear day you get a great view and can continue right into Coire an t-Sneachda as well.

Summiting Cairn Gorm from there is nice and simple with a short sharp burst up back to the path on the ridge and then up to the weather station and the top. Likewise, the well-defined path between Cairn Gorm and Ben Macdui with Glen Dee on your right and views down to Loch Avon on a clear day to your left passes quickly and easily.

Macdui at 1309m will be the highest point on your route but instead of offering the "all downhill from here" it seems to promise will greet you on the Southern side of the summit with a good few kilometers of fairly horrendous boulder field. The eastern way off the summit in the direction of the Shelter Stone crag is going to be awfully tempting at this point considering Strava purportedly put our maximum descent gradient here at roughly 53%. It's steep, it feels long, the larger boulders are not to be trusted as in any way stable and it's also not runnable if you're here in your trail shoes no matter the depth of your lug..!

It's worth it, however, for both the ridge up towards Carn a' Mhaim - which is gorgeous viewed back from Braeriach on day two - and for the wee whisky-based reward we allowed ourselves at every summit on the first day.The ridge will give you about 4 or 5 decent false summits on the way up if the cloud base is lower and if you've tired legs in your party at this point they're going to need extra rations to avoid them tearing your head off for suggesting "this bloody route" in the first place. The the descent off of the Southern side of Carn a' Mhaim is worth the extra 2k in essentially the wrong direction to avoid the - very steep - scree on the western face of the summit down into the Glen. It also joins one of the many well-walked and defined paths at around 500m again which leads you nicely to Corrour Bothy and potentially your bed for the night. The bothy is well kitted out and could sleep 6 relatively comfortably. There's a wood burner in the bothy itself but you're likely going to have to cart your fuel up with you as there's essentially very little in he vicinity to feed your fire once it's going. A couple of candles and the rest of your whisky is absolutely recommended here. There were 4 others at the bothy when we arrived around 17.30 so we decided to sleep outside in the tents - it's popular so don't necessarily count on it being empty upon arrival. Hotel for the Evening.

Unfortunately after the glorious, scorching previous months in Scotland it was relatively wet overnight which appeared to awaken the entire season's midgie population in one horrible, fell swoop. Thank the Lord for Smidge and the shelter of the bothy.

Day 2 starts with a short sharp kilometre back up to around 1000m to bag your first peak of the day with The Devil's Peak (in case there's any royalty reading..give it a Google). Worth dropping the bags off at the top of the path up, bagging the summit and coming back down to pick them up again to give yourself some respite from the packs for 20 mins or so. The packs in question were actually a bit of a gear test for us as well with both the Osprey Aether 85 AG and the 70 AG getting outings for the first time. (in short; brilliant. Super light, the "Anti-Gravity" system works wonders and we discovered countless different ways to customise and use the bag even as we wore them. 5/5). From there, keep the ridge on your right hand side (if you can see it) and head up towards Cairn Toul at 1291m. You'll meet another - much smaller and more manageable boulder field off of the Western side of the summit lasting about 1km as you head round towards Angel's Peak. The view down towards Lochan Uaine and the Corrie offers a great look back at the previous day's summits and down into the Glen if the weather's on side from here. The Way Up Towards Sgòr an Lochain Uaine.

The path on much of Day 2 is fairly unbroken and obvious - certainly between Angel's Peak and Braeriach. A wee detour West just South of your final summit to the Wells of Dee and Falls of the same name might well be worth it especially if there's not an extended period of dry weather which will let you see the Falls in spate. Towards the Wells of Dee (honestly).

Braeriach gives you your 2nd highest summit on the route and arguably the best pay-off at the Summit given the views back up the Glen towards the Linn of Dee. We were definitely rewarded with a slightly higher cloud base affording us a solid view back to Lochan Uaine and back to the Ridge between Macdui and Carn a' Mhaim. A view that was thoroughly needed considering this was summit 7 of 7 and we were yet to have a cloud-free top at this point. The route really is all downhill from here with a solid - and fast and fun if you're running it - descent off to the Northeast. Down NorthEast off Braeriach.

It's worth taking the route that snakes through the Chalamain Gap to see this whilst you're there also as it's fairly impressive. 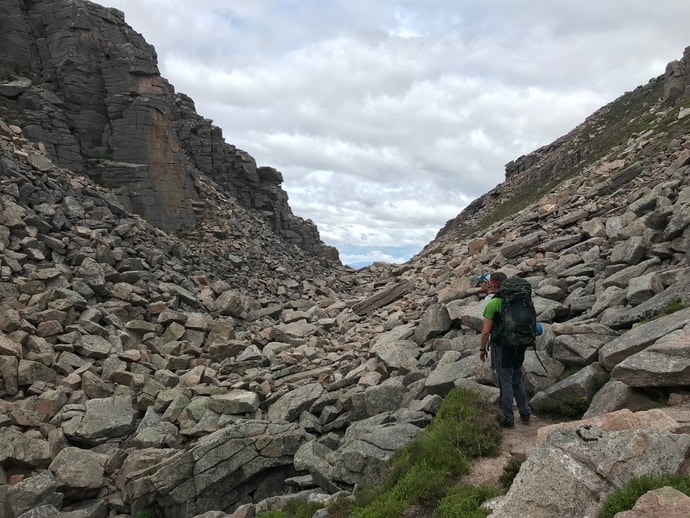 The route will eventually meet the wooden footbridge you'll recognise from early in Day 1 as the amount of people you come across skyrockets telling you you're on the home straight. From there it's a couple of km back along the road towards the vistor's centre, the car and the removal of your shoes.

Note; the GPX file attached is an approximation made by Strava of the actual measured route we took via a Garmin Watch. It's not sufficient if it's the only thing you're gonna rely on - particularly if your weather's less than ideal.

Additionally the inspiration for this route originated from another Forum post on the site - which I can no longer find unfortunately. However it hadn't been routed or reported that I was aware of. Thanks for the inspiration and I figured that the GPX file and additional report might be useful for someone else thinking about something similar.