The beginning of an era – the Bivvi era

The beginning of an era – the Bivvi era


The beginning of an era – the Bivvi era

From being woefully under-equipped on my first Munro, an overnighter up Lochnagar, little did I know how much money I would spend on kit, nor did I appreciate how the right kit really does change any adventure.

I remember after writing my first Walk Report of that night on Lochnagar, someone recommended getting a bivvi.

“What the fu… is a bivvi?”, I remember thinking to myself. Even after a quick Google I didn’t feel much more enlightened. 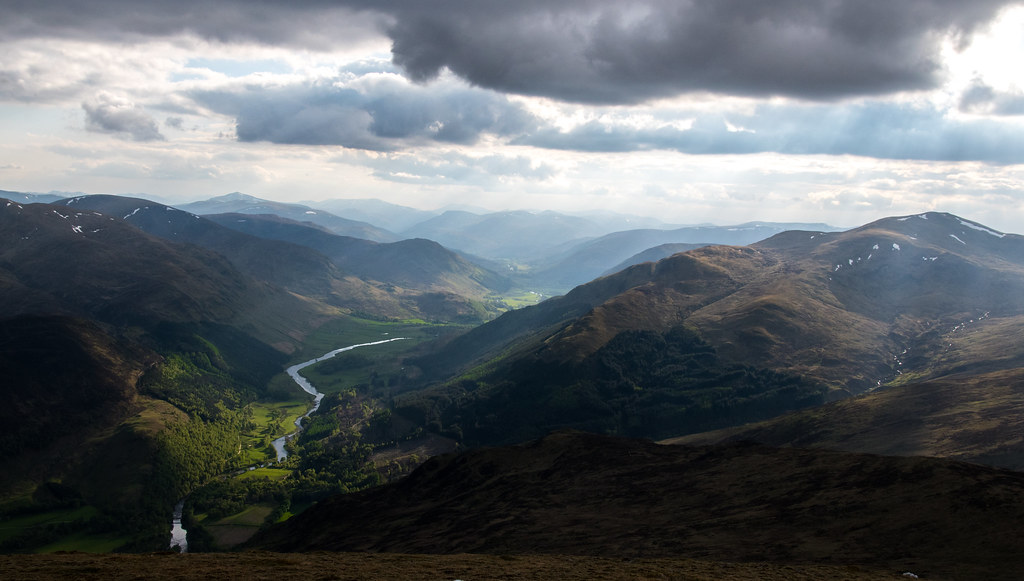 I opted to try out the bivvi on the Carn Mairg circuit from Invervar for a few reasons.
• I had a half-day at work on the Friday so Invervar was relatively accessible from Aberdeen.
• I reckoned I would be able to complete most of the walk on the Friday night.
• If it went tits up, it would be an easy walk down to the car.
• I had to get to Glasgow early on the Saturday to witness the double treble…

Start of the route through the forestry works 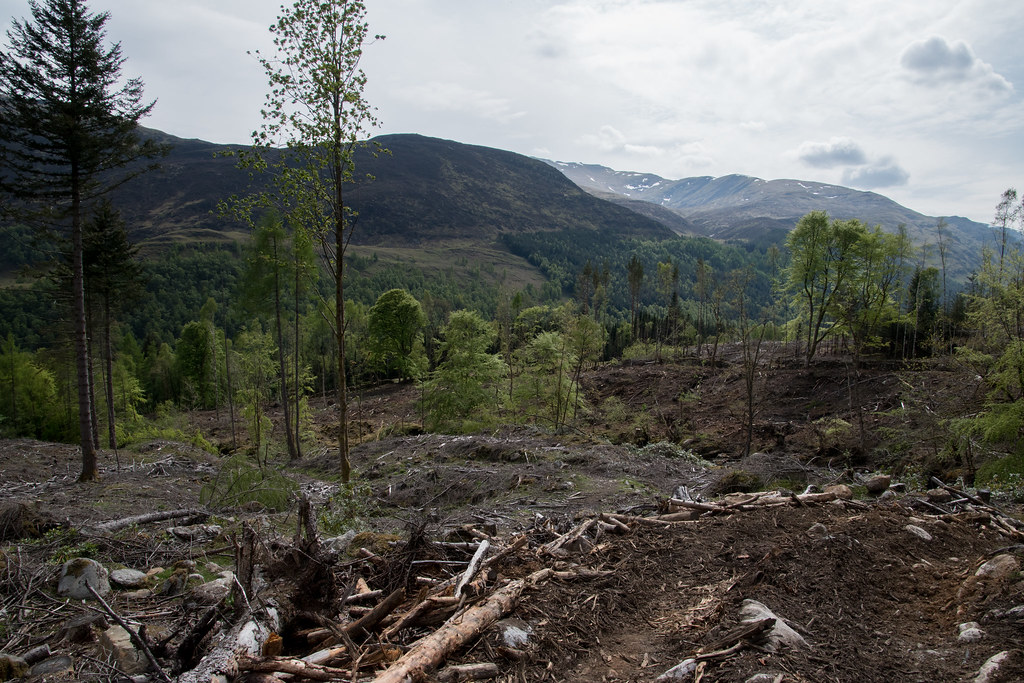 The estimated Walkhighlands time is 7-8 hours but after meeting an older fellow at the car he assured be I would be done in no more than 4.5 hours…

By now it was already getting late so I met a few people doing the circuit anticlockwise who seemed bemused that I was heading into the hills so late with such a small backpack.

The first bivvi benefit, all the gear for an easy overnighter in summer crammed into a 33L backpack – it was already significantly lighter than a winter daypack.

The footbridge crossing the Invervar Burn 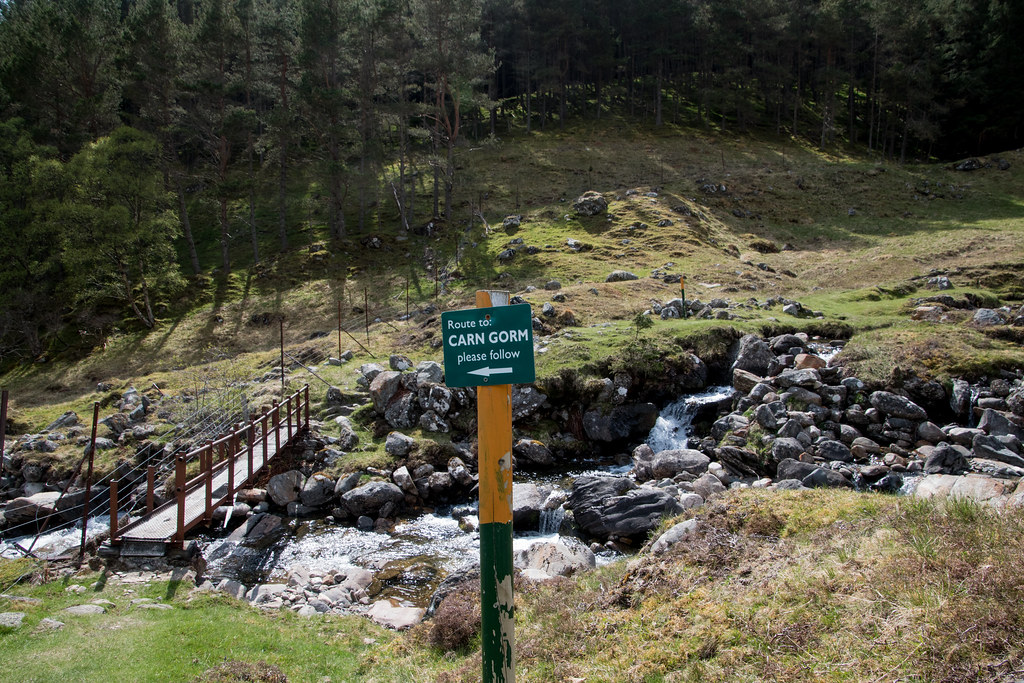 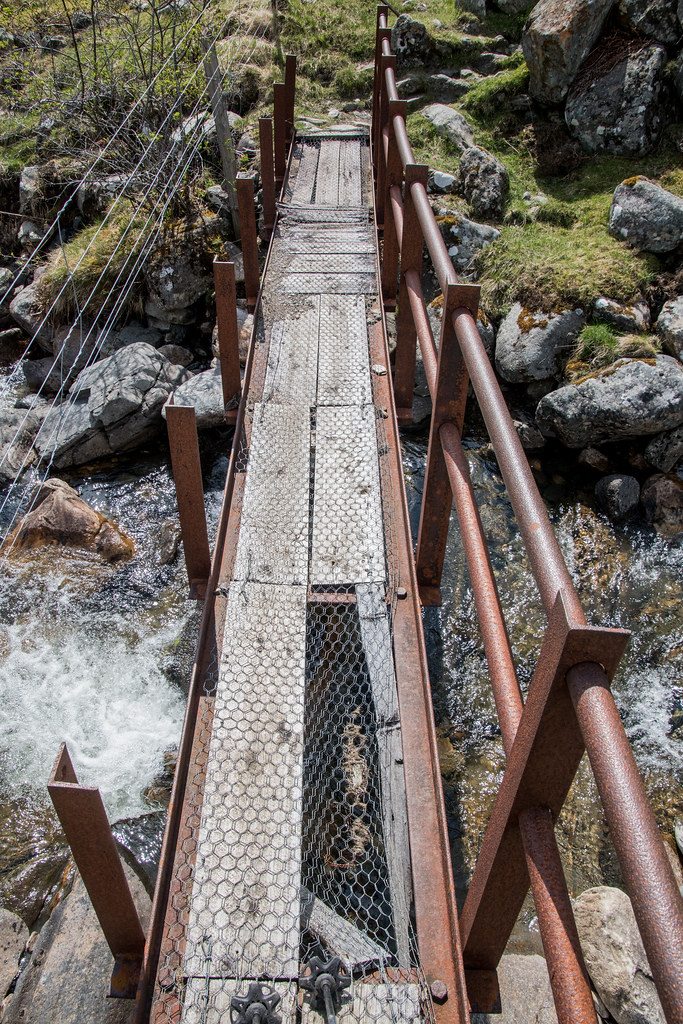 I think it is safe to say that the footbridge has seen better days; I doubt it will have much life left. Thankfully the burn could be easily crossed slightly further up.

Heading up Carn Gorm I was struggling. Struggling badly. Maybe from a 6.30am start at work, a rushed drive down to Invervar but I felt unconvinced that I would make it round as far as I hoped by dark.

The view up Carn Gorm 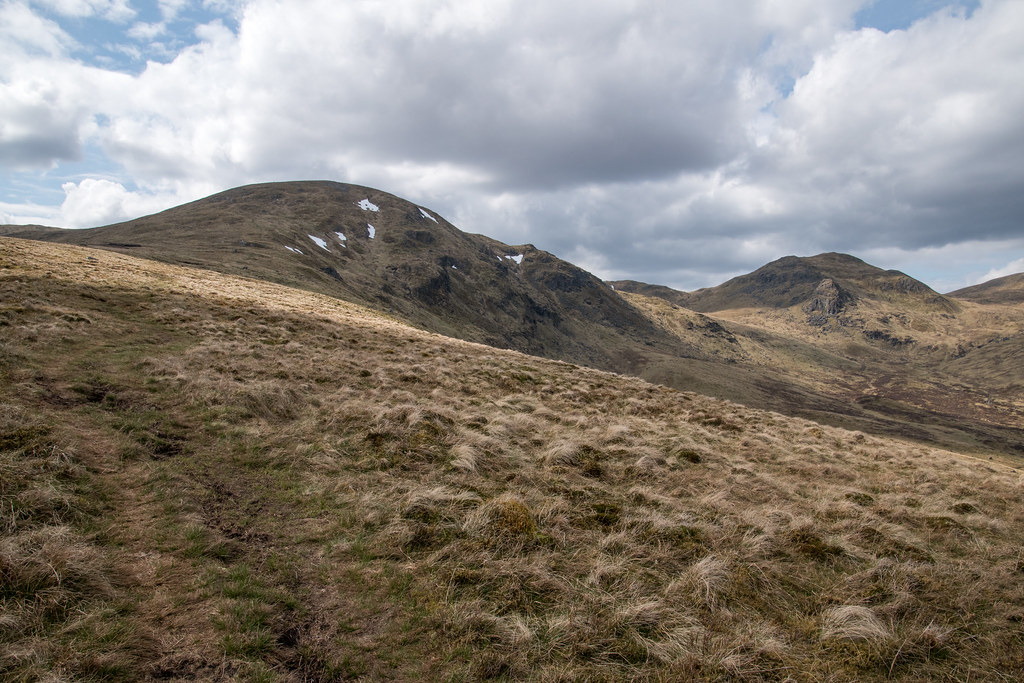 Near the summit of Carn Gorm. Ben Lawers Range 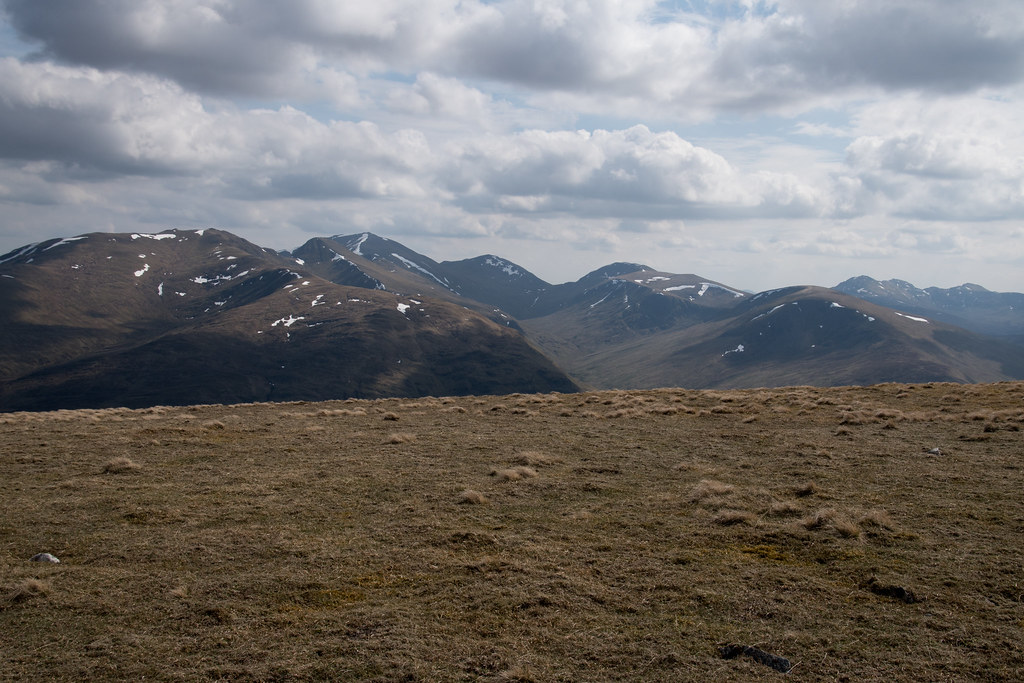 I was grateful to have some clear visibility on this route because the highlight was looking towards the impressive Ben Lawers range.

After a quick pit-stop at the summit of Carn Gorm, I was convinced the rest of the walk would be easier in comparison and set off towards Meall Garbh.

Loch Rannoch from the shoulder of Meall Garbh 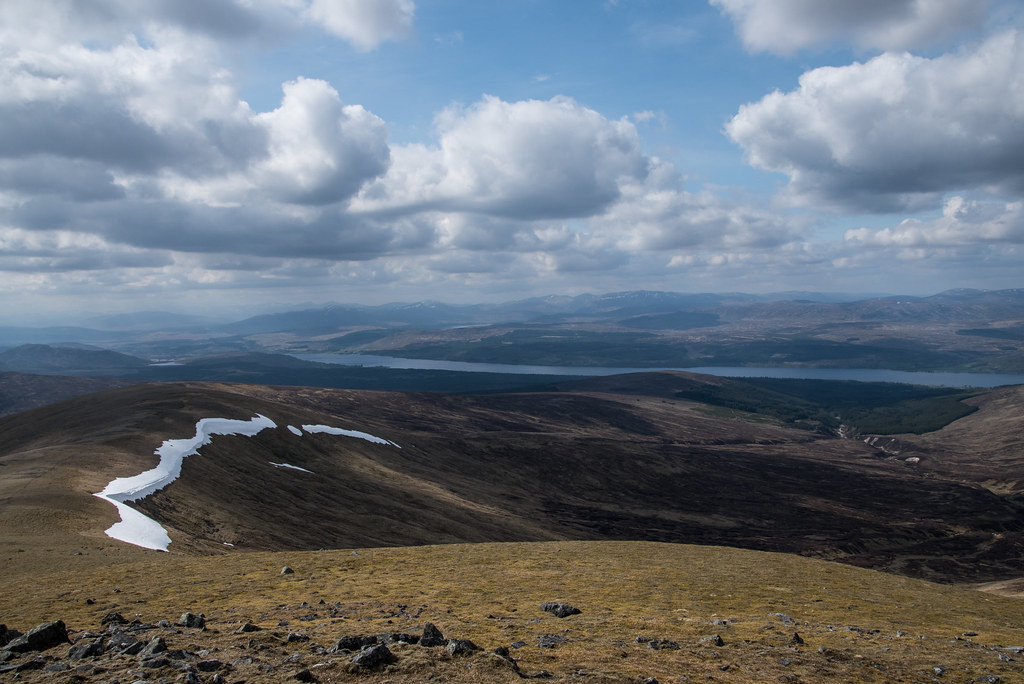 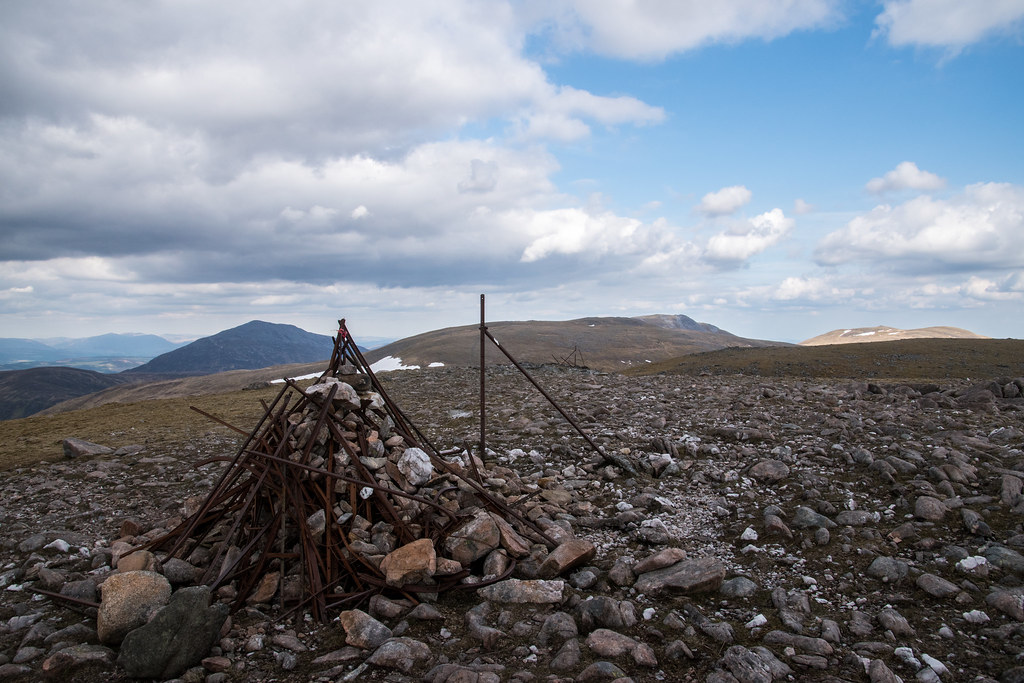 Schiehallion covered in shadow clearly visible on the left hand side with Carn Mairg, the next Munro, looking a fair distance away and Creag Mhor looking even further away, on the right hand side of the photo.

Looking back to Carn Gorm (& the Lawers Range) 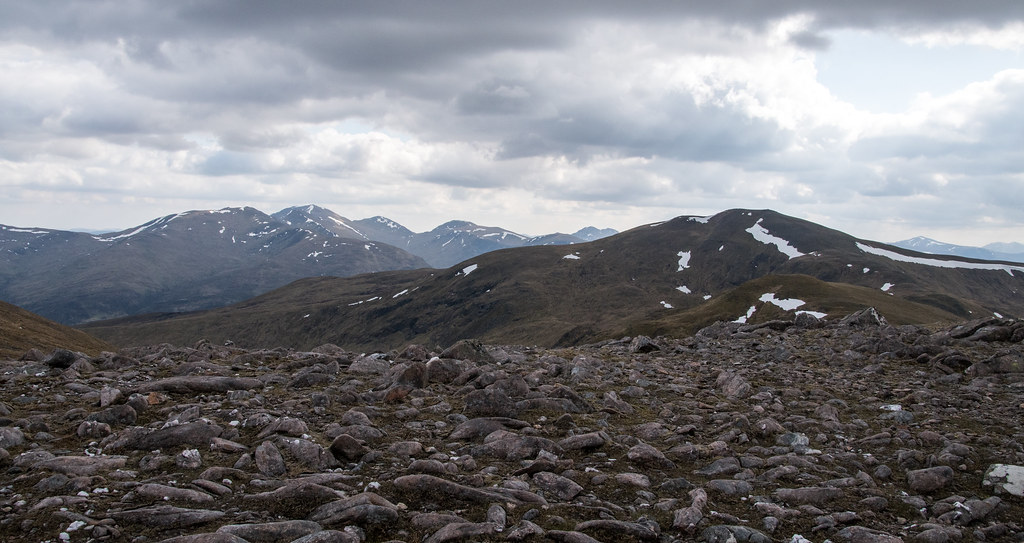 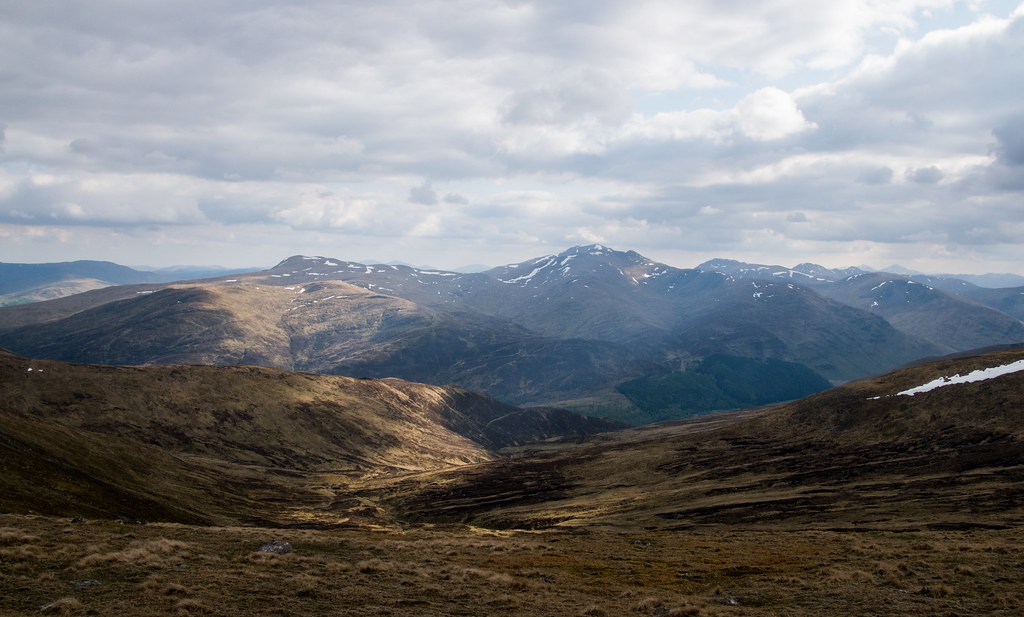 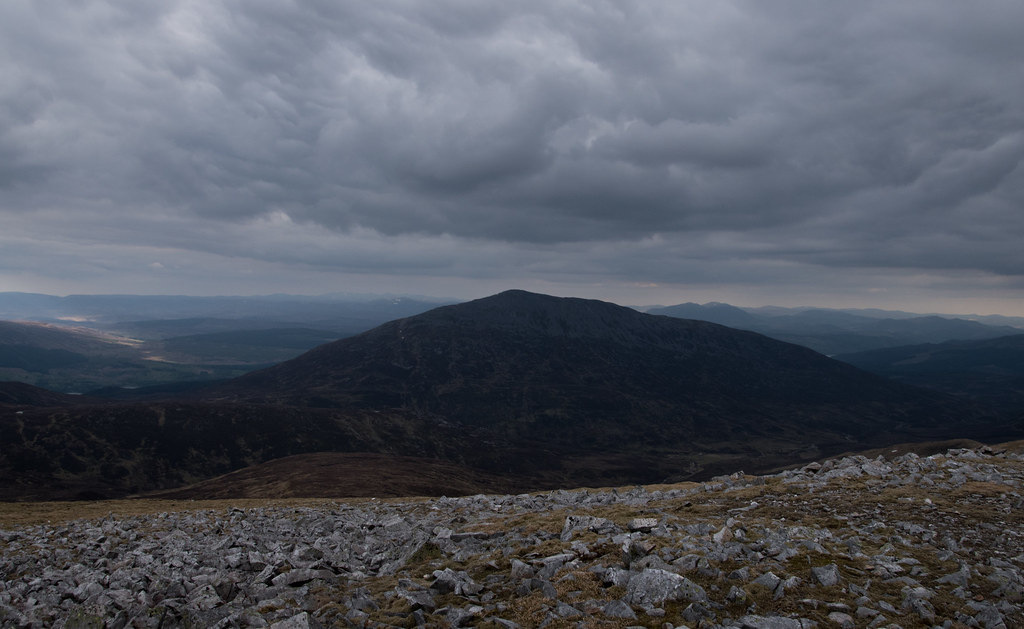 Reaching the summit of Carn Mairg was welcomed, I knew I only had about 90 minutes of daylight left and by now I was confident that getting to Creag Mhor would be achievable. I stopped and had a late dinner snack followed by accidentally finishing all my water… 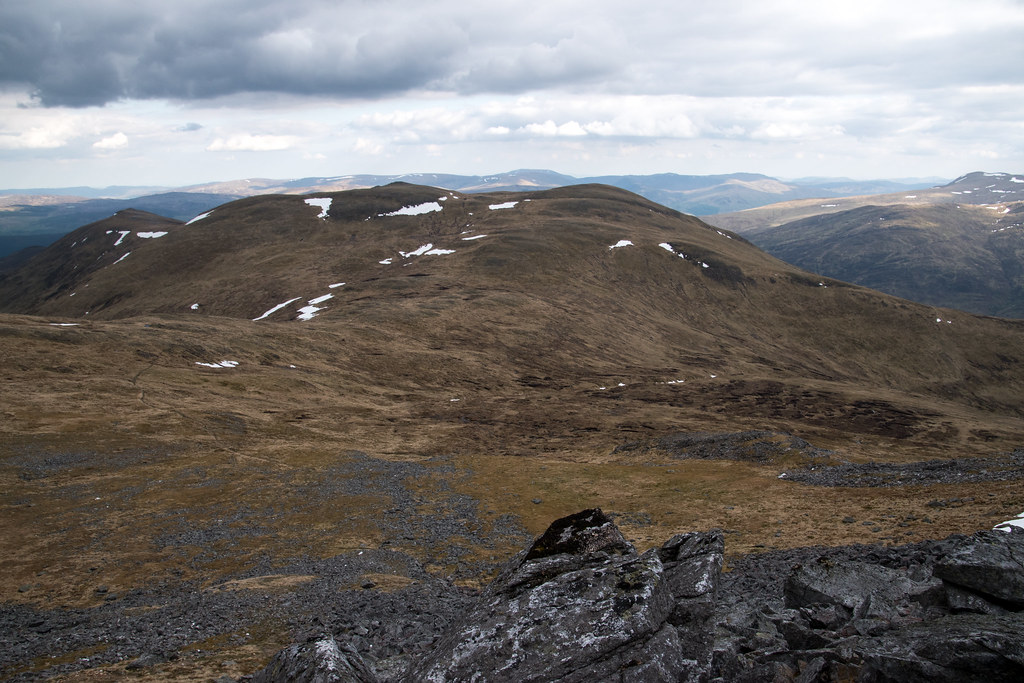 How can you accidentally finish all the water? Quite easily actually, well I would like to think so. I only took two 750ml bottles and I was convinced I had only been drinking from the left hand pocket, that turned out not to be the case.

Now I was left with a bit of a dilemma. Obviously I could easily get through the night without water but I was also aware that I had been a dope and had already finished all the water in the car… (a mistake I won’t make again).

I opted to plod on and hoped to get some “fresh” bog water between Carn Mairg and Meall Liath.

Looking back towards Carn Mairg 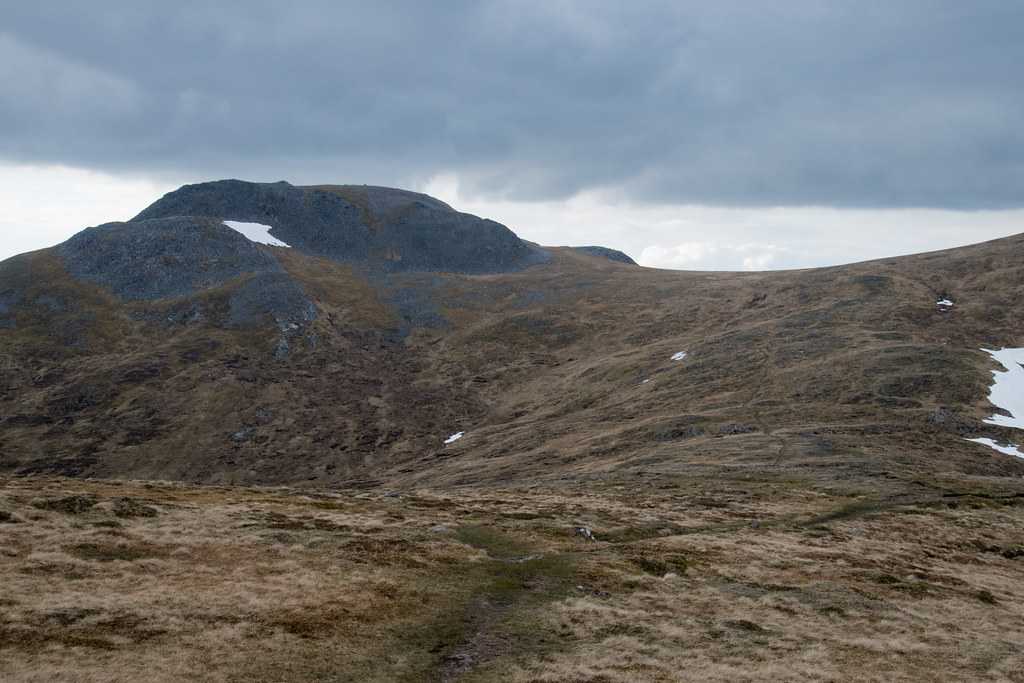 I was lucky and found some running (just) water, decided it looked clean enough and took the gamble. So far I have been fortunate with the hill water and not had any adverse reactions, long may that continue!

By now the clouds were creeping in and the sun was beginning to set, creating some tremendous views. I was reluctant to leave Creag Mhor to the morning so I ran, quite literally, up to the top to get down the western shoulder to savour the evening views.

The finest of evening views down Glen Lyon 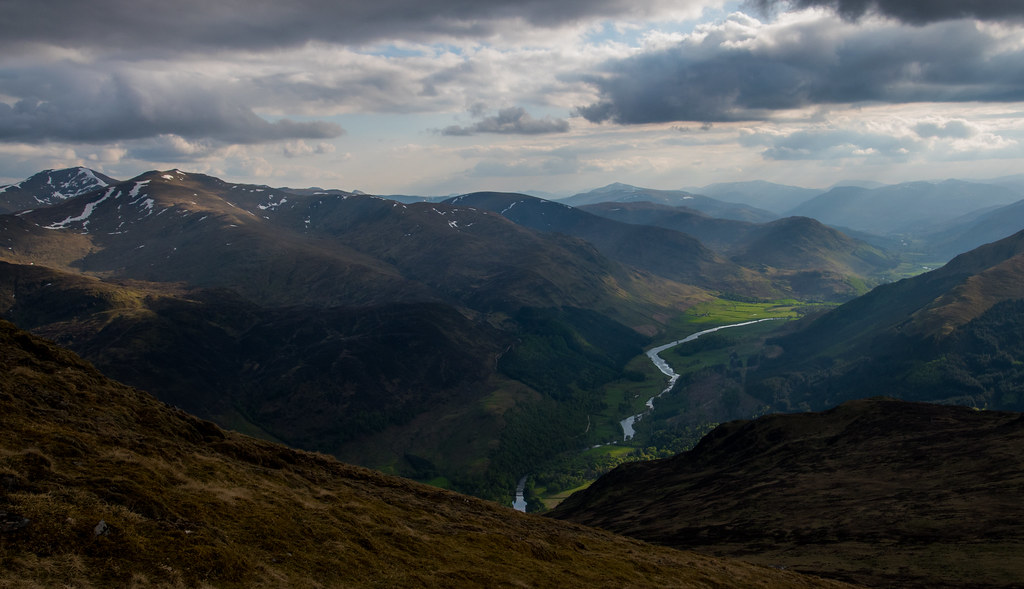 I managed to find a space big enough for my bivvi and opted for this spot for my overnight adventure. After over 20 nights in various tents I had become comfortable with the idea of sleeping in, what someone online had described as, “just a rubbish version of being indoors”.

Easier to set up… 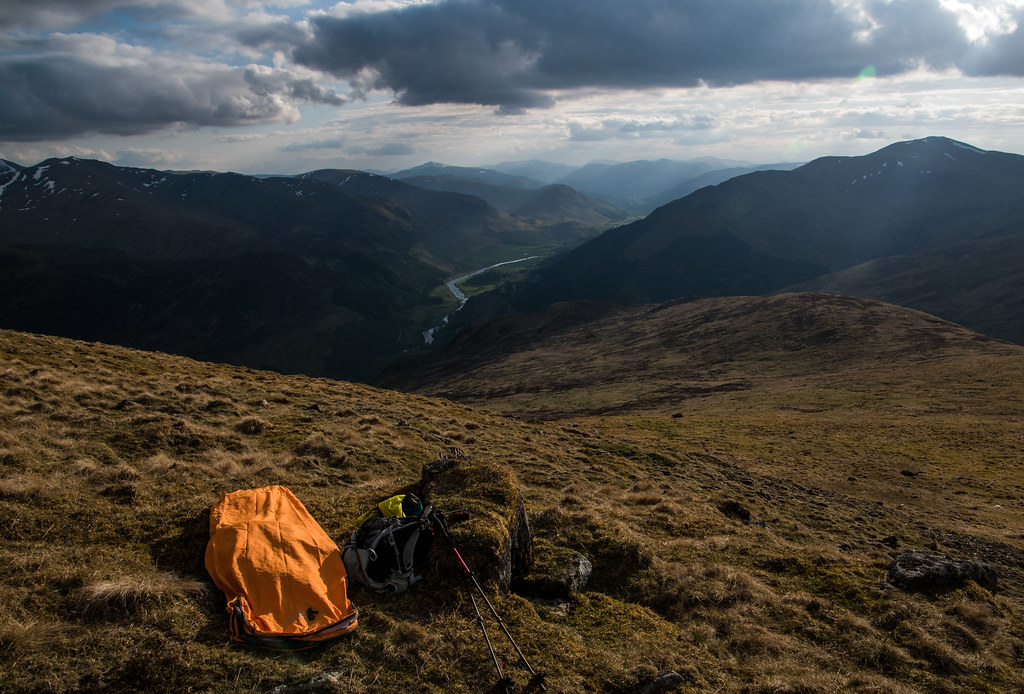 I am not entirely sure what I had expected but I have the disadvantage of wearing contact lenses so when I’d wake up and have a look around all I’d get is a blurry mess of hills and stuff…?

I guess both the tent and the bivvi have their own obvious benefits. Clearly the bivvi is lighter and can be used in more restrictive places. The tent would definitely be better to sprawl out in and feels more luxurious.

The unobvious benefit of a tent over a bivvi is that presents itself as a much better subject to photograph.

The unobvious benefit of a bivvi over a tent is that it is like surviving a night out in the hills in a waterproof big bag – how frickin’ cool is that?! Although more contained with higher potential for being claustrophobic, the idea of being (almost) completely exposed to the elements is amazing.

Waking up to these views (once I put glasses on!) 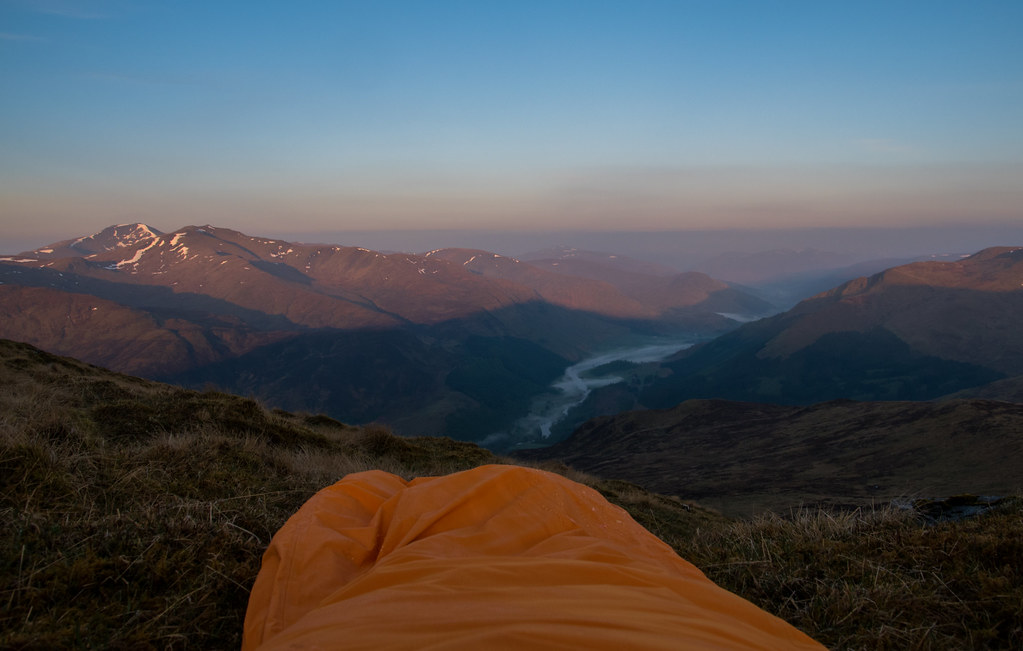 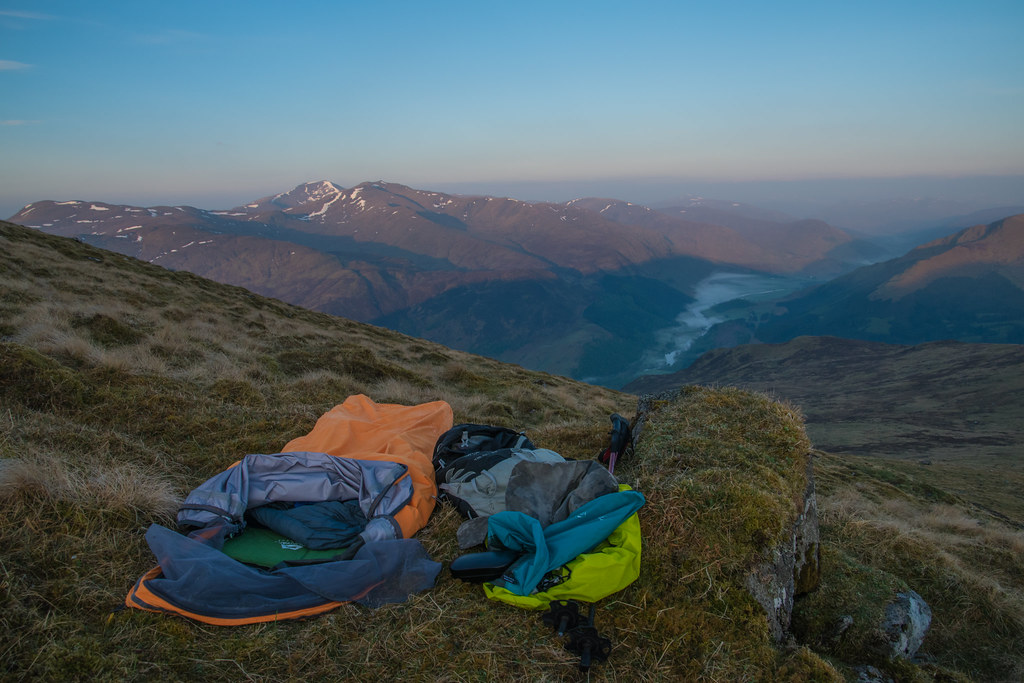 I set off early doors knowing I had to get to Stirling, then to Glasgow via the pub to get to the football for a 3pm kick off. The walk down from Creag Mhor was easy going and took hardly any time at all – I was still buzzing from a first successful night out in the bivvi. 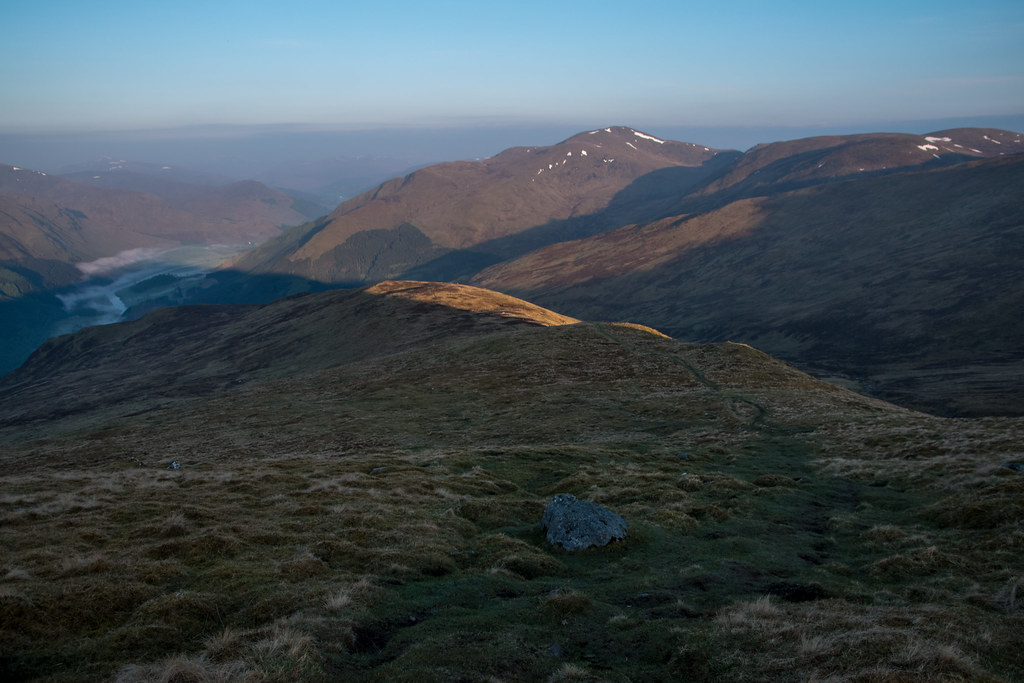 Little rabbit at the car 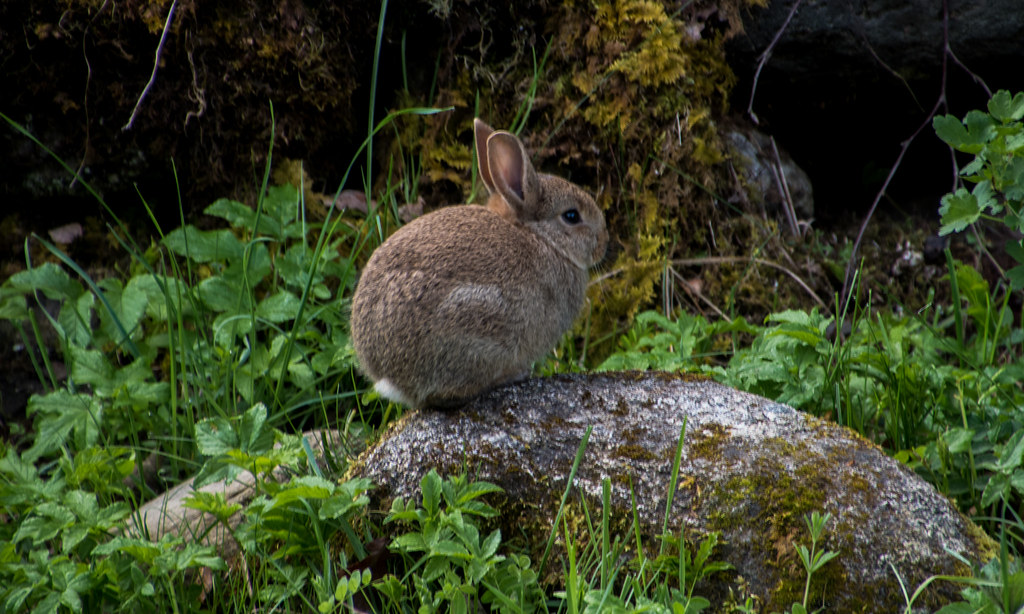 The struggle of getting up Carn Gorm seemed like a million miles away now I was back to the car.

Although some teething problems with condensation I was confident that there would be a number of nights in the bivvi to follow. Luckily enough I still had 174 Munros to practice in!

I can see the attraction of having a very portable means of surviving a night in the hills and the freedom it gives you but I will stick to having a shower when I wake up and not looking like a ready meal for those man-eating deer that roam the hills.

Jings that older fella must have been fit!

andygunn23 wrote:If it went tits up, it would be an easy walk down to the car.

Trying to imagine Bonnington coming out with that line!

Awesome report, just a shame about your choice of football team..