When even Dubhcraig bogs dry out

When even Dubhcraig bogs dry out


Over the years, the bogs of Beinn Dubhchraig have gained a bad reputation in the hillwalking society. The route up Coire Dubhchraig is so notorious that earlier this year, I was looking for alternative means of ascent for the duo of Munros in question. But in the end, we were blessed (or cursed, depends on your point of view) with such a dry summer, that I expected even the Dubhchraig bogs will be crossable - and I was right. So in the end we did Oss & Dubhchraig the usual way, no fireworks and no great surprises, apart from the fact that the path up the corrie was mostly dry.


Track_BEN OSS 07-07-1804.gpx Open full screen  NB: Walkhighlands is not responsible for the accuracy of gpx files in users posts
It was a sunny, hot Saturday morning, when we set off from the Dalrigh car park. There were walkers both in front and behind us, someone overtook us when we stopped for a few photos on the bridge over River Cononish, we saw long "processions" of people walking the WHW. Half past nine and it was already boiling hot, so unusual for Scotland River Cononish from the bridge: The early morning panorama from the track along the railway to Tyndrum Corbetts and Beinn Dorain (far left):

We crossed the railway and almost missed the small cairn marking the path to the new footbridge. This short section would be a real quagmire in wet weather, but now it was just a bit damp We remembered all ghastly stories about the path along Allt Coire Dubhchraig, the "you'll never forget this experience" kind of stories, so we expected bogfeast, but... we got a dry-ish path instead! 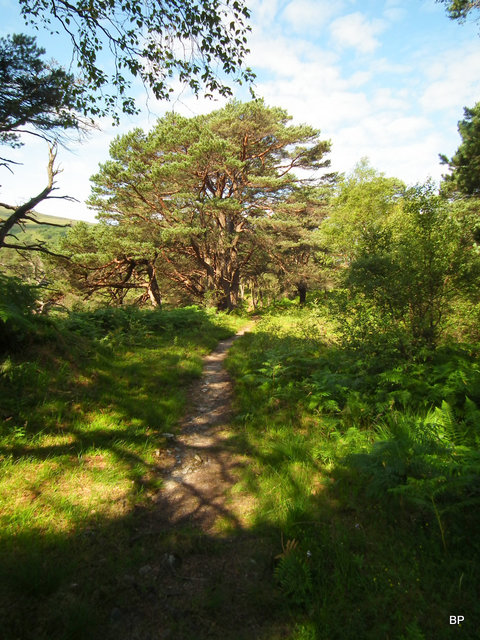 I said dry-ish simply because every five or ten minutes we would have to cross a short, wet stretch. But overall, the path was easy going. Some high bracken along the way but nothing worth carrying a machete

And the forest surrounding us offered a welcome shade: One of the wet stretches, nothing a fit cat couldn't jump over: The waterfall half way up the corrie was next to non existent, but I'd rather have that than knee deep bog

Looking back down to Ben Challum and Tyndrum Corbetts, the latter as yet unclimbed but they are on the list: The well worn path goes all the way up to the summit ridge of Beinn Dubhchraig. Not much to say about the climb itself, we simply marched up the grassy slopes of the corrie. The sky clouded up as we walked and the temperature dropped, I was happy to lose the tropical climate for a few hours Looking south-east from the rim of the corrie:

View north to Bridge of Orchy Munros, the humble Graham Meall Odhar in the foreground:

The summit of Beinn Dubhchraig is only a few hundred meters in SE direction, along the ridge. It's topped with a large cairn. My 238th Munro (82 for Lucy): By the time we reached the summit it was overcast high cloud and the air was getting hazy, so sadly, pictures from the top are not up to the usual standard. We admired the view down south along Loch Lomond:

North to Beinn Chuirn and Glen Etive/Glen Coe hills on the horizon: Nevermind the haze and the high cloud, nothing could stop Panther from meowing!

Kevin a bit disappointed with the hazy views. It looked so nice and bright in the morning, hard to believe how quickly it changed! After a 10 min rest on the summit of Beinn Dubhchraig and a quick snack to keep us going, we set off to climb the second hill, Ben Oss. The drop to Bealach Buidhe is almost 200m but it didn't discourage us. It actually doesn't look like 200m... Or maybe I'm used to constant up and down now... Beinn Chuirn and the Cononish gold mine:

The path is obvious all the way down to the bealach and then up to the ridge of the second Munro:

Loony Panther on the lower top (941m), with Ben Lui in the background: Kevin on his 243rd Munro with Lui behind (he has already climbed it, I haven't): Views from Oss would be good. I said would, because by the time we got there, the air was extremely hazy. Probably polution blown in from the continent as the wind was coming from the south.
Loch Lomond and the surrounding hills so hazy:

We sat down to have a cuppa and sandwich, but I struggled to sustain my usual level of optimism as we stretched on the rocks, chewing our lunch and gazing in the distance. It all looked so sad, grey and depressing, I just wanted to finish my sandwich, pack up and get the hell out of there. It didn't help that other people started arriving shortly after us and soon the summit was crowded like a busy train station

We returned to Dubhchraig without any incidents. We passed even more walkers going up Oss. I wasn't surprised seeing so many people on this route, it was after all, a summer Saturday and weather (despite the haze spoiling the views) was decent enough.
The final descent into Coire Dubhchraig didn't take us long, we overtook quite a few slower walkers, maybe I'm not as old as I look after all

..........
Summing up, not a route to write poems about, but with the dry conditions underfoot, pleasant enough. It does not really feel like the 1200m of ascent it adds up to, maybe because it's good paths everywhere. We might come back to this duo one day to find an alternative way up, but for the time being, we're more interested in the neighbouring Ben Lui.
...........
My next story will be about a quickie of a Corbett which cost us... some 100 miles of detour!

It takes a helluva prolonged dry spell to dry that bogfest out!

I think you should have to return under "normal" conditions

So I had been told. I was surprised it had actually dried. We expected knee deep bog but got easy walking instead. Just shows how extraordinary summer we have this year!

PeteR wrote:I think you should have to return under "normal" conditions

If we re-do this duo, it will definitely be an alternative route, possibly from Glen Cononish side.