The statistics show that this is apparently one of the easiest Munros to bag, but they don't even come close to telling the full story. For a start, there is a bit of an 'adventure' to get to the starting point. The hill itself is a superb viewpoint on a clear day and the set-up at the Corrour Station House is top class and welcoming. Here's the brief summary of the day that we were recently lucky enough to enjoy:

Having researched after looking down on Corrour Halt from a distance last week, we had decided to stay overnight at one of the 3 rooms in the old signal box. Our good luck came when we saw just how popular those rooms were - we got virtually the only free one within a month either way. Picked up the West Highland Line train at Crianlarich and reached Corrour Halt just over one hour later. Had a look inside the restaurant - showed great strength of character to resist the wonderful cakes on offer. We then left our overnight bag and headed out. The walk from the station to the top of the hill took 5 hours, because we spent ages taking in the views and went for a look at Loch Ossian on the way back. The round trip could easily have been done in 4 hours - less if you were in a rush. Here are some of the views: The Corbett to the west of Corrour station NOT the summit, just the odd wee shelter a few hundred metres short of it. Loch Ossian, Sgor Gaibhre and Carn Dearg behind. The wee lochan just below the summit cairn East end of Loch Ossian, with Ben Alder on the R and the ridge of 4 Munros on the L. Loch Ossian from the hostel. Ben Alder behind to the right. Yet another looking east along Loch Ossian

Anyway, back to the Station House for a beer or two outside in the sunshine, followed by large and tasty portions of grub. Had some fun watching the last train south arrive and depart, then we almost had the place to ourselves. Quite wonderful to be out there in all of that space, with the comforts of home close at hand! (Yes, we know it was not exactly wilderness and we weren't exactly slumming it but what's life if you can't treat yourself once in a while? Final southbound train - the sleeper terminating at Euston station in London. Quite a contrast!

It was a day of sunny spells with highish non-threatening clouds. The wind blew a hoolie virtually all day but the temperature remained at T-shirt level. VERY unusual in my experience but this was the day where those in the south of Englandshire experienced over 35 degrees. The only time the wind dropped was a period of complete calm at dusk back at Corrour, when the midgies quickly appeared in vast numbers to drive us all inside. There was a bit of excitement when a helicopter landed at the Hostel about a mile away, to pick up a young chap who had apparently returned with concussion but no gear. Fingers crossed it worked out OK for him. Next day, we went a little way towards the Corbett that dominates the west side of Corrour, to enjoy the view down Loch Ossian. By the way, that looks like a very enjoyable round trip circuit for another day. Then we caught the second train south to Crianlarich and arrived there just over 24 hours after we had left. 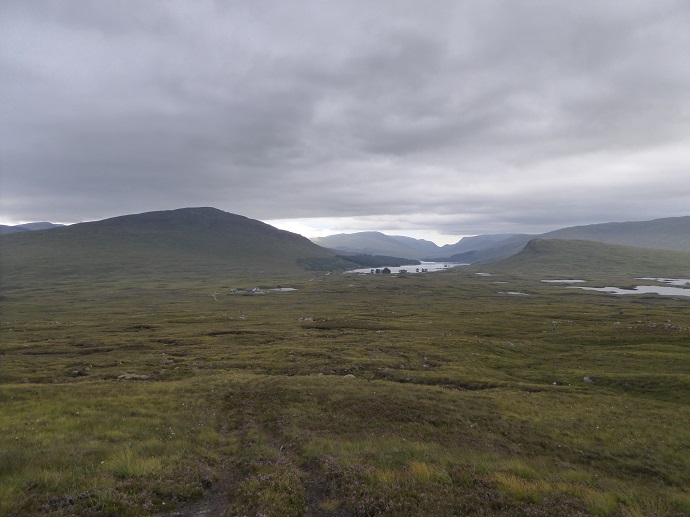 The final train picture. I promise.

All in all, a straightforward Munro, but a memorable day!