our_route.gpx Open full screen  NB: Walkhighlands is not responsible for the accuracy of gpx files in users posts
I had planned to walk this route back in May, but missed the road marked 'Lochs Estate'

and ended up at the Glen Lyon Dam; from where I climbed Beinn Heasgarnich and Creag Mhor instead. However, today I managed to arrive at the right dam!

My plan was to follow Cameron McNeish's route around Loch an Diamh and after briefly chatting to a couple at the parking area, who were the only people I met all day, I set off across the bridge and along the track. The cairn which marked the start of the hill path was easily noticeable and the hill path up to Creag an Fheadain's east ridge certainly got the lungs working. Back to the dam Across to Stuchd an Lochain

Thankfully the grassy ridge above Lochan nan Cat gave some much needed respite and the summit of Stuchd an Lochain was soon reached. From here until the summit of Meall Buidhe the hill paths virtually disappeared and it began to feel much more like a 'back-country' experience (cue dueling banjo music). Fenceposts showing the way to Meall an Odhar

Having spotted a herd of deer on Meallan Odhar and having noticed on the estate's sign back at the parking area that stalking would start on this estate in two days time, I decided to try and not spook the deer and headed directly for Bealach a' Mhaim to the south of Sron a' Choire Chnapanich, missing out Meallan Odhar altogether. View of Sron a Choire Chnapanich 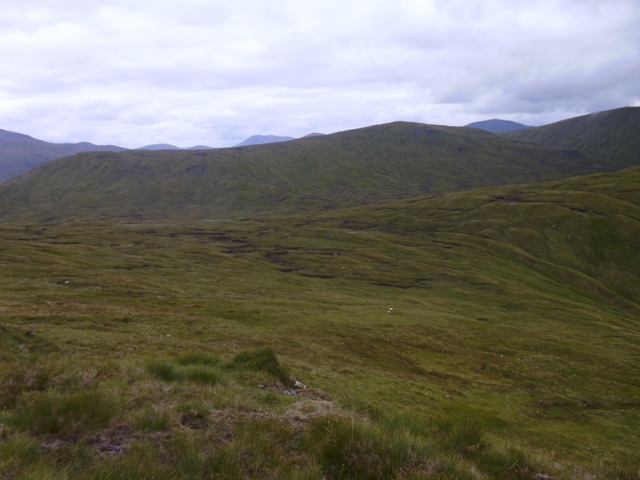 Bealach at the foot of Sron a Choire Chnapanich

After having negotiated the numerous peat hags and boggy ground on this detour and in the bealach, I was glad to be heading up the more straightforward southern slopes of Sron a' Choire Chanpanich. To say the descent from Sron a' Choire Chanpanich is 'steep' is an understatement! Looking down I felt some trepidation at the thought of making this descent, because it looked VERY steep from the top with no obvious or easy way down. However I knew other WH'ers had already done this descent and therefore it was possible, so I carefully picked my way down. Stopping at the bottom for lunch, I regained my composure and soaked in the seclusion of this remote and quiet spot, The Steep slopes of Sron a Choire Chnapanich 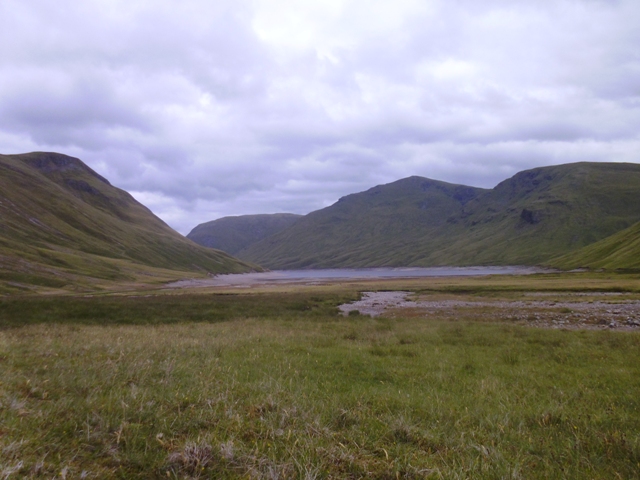 The view east across the loch

After lunch the steep walk up towards Meall Cruinn began, pausing often for breath, I eventually reaching a point southeast of Meall Cruinn. Here I took a bearing for Meall Buidhe and began the long tramp through peat hags and moorland towards the second Munro of the day. Thankfully the clouds were well above the summits and visibility was excellent, as navigation through this pathless and fairly featureless terrain in poor visibility, with only a map and compass, would have been challenging (well for me anyway). Looking across to Stuchd an Lochain Where is Meall Buidhe?

Eventually I started to pass the small cairns marking the way to Meall Buidhe and it's summit eventually came into sight well before I reached the ridge. The final pull to Meall Buidhe Looking across to Stuchd an Lochain from Meall Buidhe's cairn

I followed the obvious path to Meall a' Phuill where it then became indistinct. From here I decided to take a line downhill towards the dam that would hopefully avoid the worst of the rough ground. Looking across Loch an Daimh

It had been a tiring and refreshingly quiet day and I was glad to reach the car. I was also pleased to find that the herd of highland cows which had been grazing close by had not used my car as a scratching post!

Re: The Right Dam

Doric Plodder wrote:To say the descent from Sron a' Choire Chanpanich is 'steep' is an understatement! Looking down I felt some trepidation at the thought of making this descent, because it looked VERY steep from the top with no obvious or easy way down. However I knew other WH'ers had already done this descent and therefore it was possible,

Always reassuring to know that others have done it. However, some of the others may be mountain goats with brilliant heads for heights, so I don't think I would blindly assume it would be OK...however, with 60 MUnros to your name, you are obviously up to standard. In my early days, I would look at other folks' descents and think "No way!"

Re: The Right Dam

Sgurr wrote:Always reassuring to know that others have done it. However, some of the others may be mountain goats with brilliant heads for heights, so I don't think I would blindly assume it would be OK.

Thanks Sgurr, you're quite right! ('Don't be a sheep' my dad used to say

).However, in my defence, I had a good view of the descent from Sron a' Choire Chanpanich as I left the summit of Stuchd an Lochain and I was confident that this descent was within my capabilities. I just had a moment of doubt at the top... which is what I was trying to convey in my walk report.