After a morning parkun, jackfrost and I spotted this linear walk option not too far away. In beating sunshine, I got my two blue pins…and a red neck and ears for my troubles. At least it was a lesson for administering sun cream more effectively the next time

Walk reports for Stronend from Fintry don't seem common, and the crag detail on the OS 1:25k map definitely doesn't look encouraging! But the OS 1:50k map is a bit more promising, and jackfrost convinced me we'd find a direct way up. So we left one car in Gargunnock and drove to Kippen and up the B822 towards Fintry, looking for a suitable stopping point. Nothing obvious emerged, so we thought we'd try to park at Culcreuch Castle hotel.

With permission (because they had no functions that day, so this may not always be possible), we were able to leave the car in the hotel car park, and were soon on our way on the track that would lead us up the lower slopes of Stronend. After a moment's hesitation near a house with loads of barking dogs, we found the track round the back of the house, and quickly gained height until the track petered out past a rickety gate and stile. The views west to Ben Lomond and beyond were already opening up and looking good. 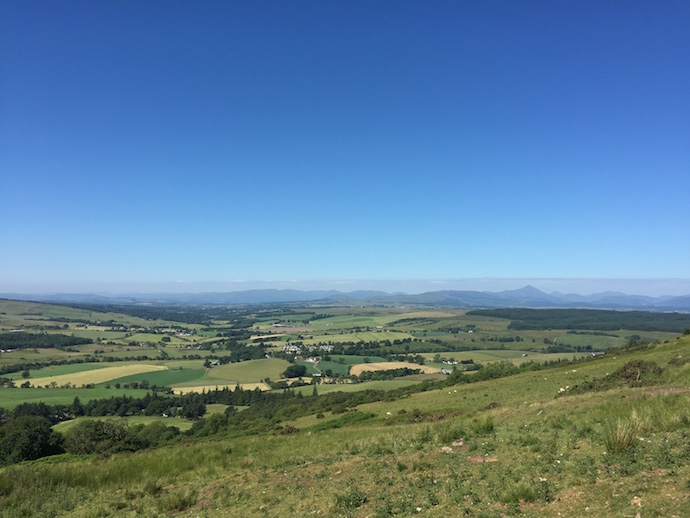 West to Ben Lomond from the lower slopes of Stronend

From here, we slanted towards the upper slopes, and sure enough, over a hummock and across a hollow, there was a breach in the crags and a very steep grassy slope up to a terrace. 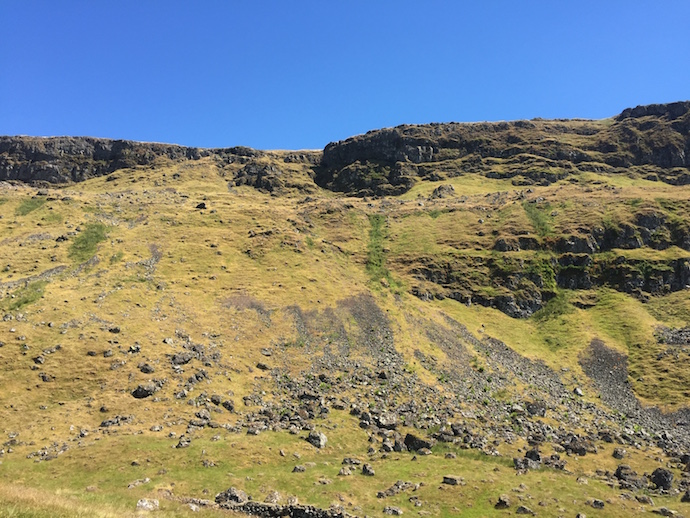 Steep ascent through the lower band of crags 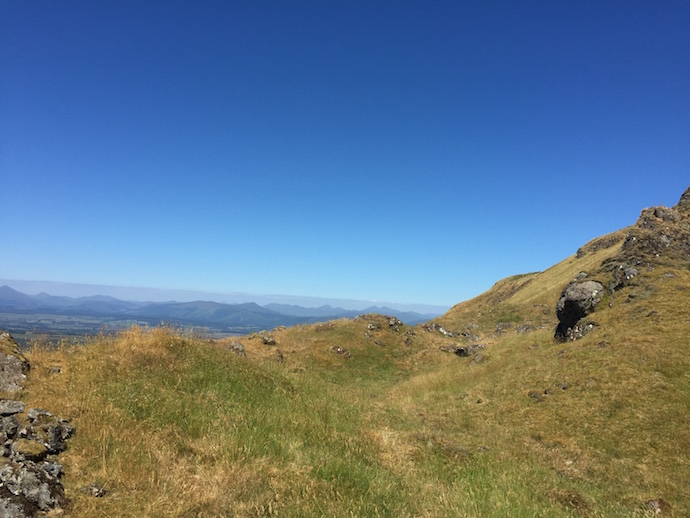 The terrace between the bands of crags

There was a faint path along this terrace, below another set of crags, and while it's not exactly Liathach, I was still conscious that below us there was a drop, so kept my focus until the upper crags gave way, and the path then zigzagged up to the summit trig pillar.

Stronend is a terrific viewpoint, with fields, Flanders Moss and mountains beyond…and we had it all to ourselves. Here the excitement tails off a wee bit, as the descent to the track above the Spout of Ballochleam is frustratingly tough going with no obvious path until a faint track eventually appears. Once we got to the top of the waterfall, we headed south on a firmer track but weren't paying attention, and missed the faint track that would take us towards Carleatheran. 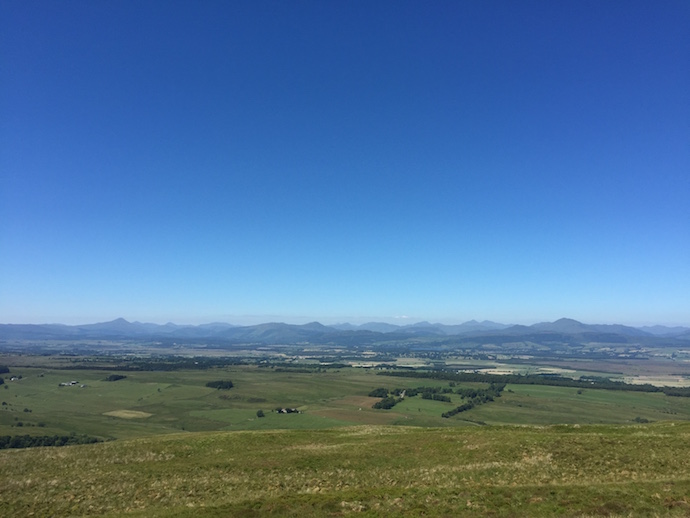 So we had to hack uphill to regain the track, such as it was, but it did lead us closer to our second hill of the day, and the open views to the north were always worth looking at. A last few hundred metres through dried up bog and we regained some form of path to take us to the top of Carleatheran, with its windmills to the south and view back over gentle slopes to Stronend that doesn't make it look much of a prize! 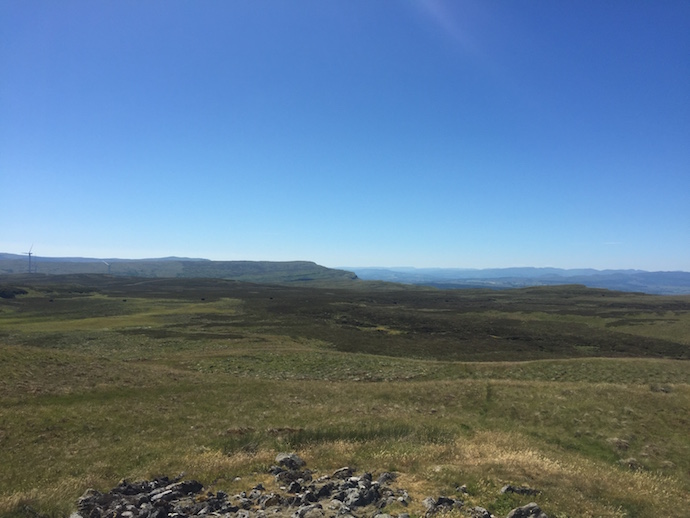 We could see on the map a winding track a couple of km further east that would eventually take us down off the scarp slope, but felt that there might be an opportunity earlier. Sure enough, after a stop to release a sheep that had got its head stuck between the bars of a gate, we picked up the infant Gargunnock Burn and turned north. 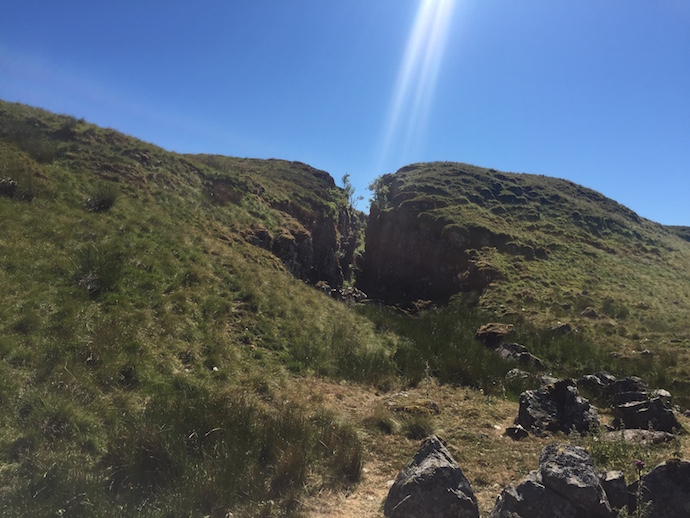 Sun rays look like they've burned a gully in the rocks!

Staying to the east of the burn as it heads down over Downie's Loup, we managed to find a small path that led us without difficulty down through the band of crags, round the edge of a small disused quarry, to pick up a track. 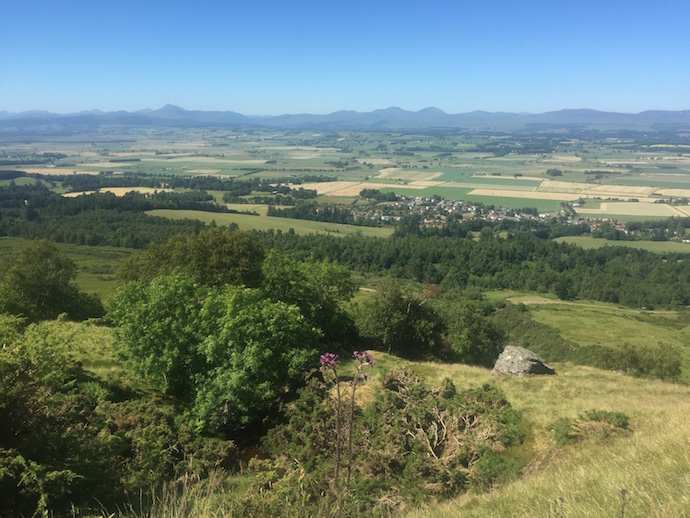 The descent route, looking down to Gargunnock village

This track led us back down to the edge of Gargunnock village, and we were soon back at the car, after stopping at the village shop for juice and ice poles

These hills are tough going, especially on a hot day, but we got a decent workout, some cracking views, and a linear walk is always an opportunity not to be missed.