Brown Carrick Hill is the highest summit on the coastal open ground directly south of Ayr. Most of the reports on Walkhighlands cover the direct there-and-back route from the convenient hill road a mile to the east, but I thought I'd share this much longer circuit from last month, taking in a beautiful (and tidal) section of the Ayrshire Coastal Path as well as the more familiar Ayrshire fields.


Brown Carrick Hill.gpx Open full screen  NB: Walkhighlands is not responsible for the accuracy of gpx files in users posts

Due to tide times we started from a layby on the A719 near Genoch Bridge (at the top right of the route), meaning we'd tackle the tidal section first. But there are several other places on the circuit you could start from, including Dunure (which I've set as the start point on the gpx file above).

Assuming you start where we did, first follow the verge west for a short distance until the entrance to Heads of Ayr caravan park. View of Brown Carrick Hill from the roadside: Head to the back of the caravans and you'll pick up the Ayrshire Coastal Path, which follows a dismantled railway line at first. Views from this section: After about a mile the trackbed disappears, with a few fields to tramp across before steps lead down to the shoreline: The next few miles to Dunure are gorgeous - along the shoreline where it's usually easier to cross the exposed rocks (at low tide) rather than follow the rough path just above them. There's at least one headland towards the start of the section which looks like it floods at high tide, though probably only just: Grassy stretch (just a little bog at one point before this): Lots of rock pool life if that's your thing! 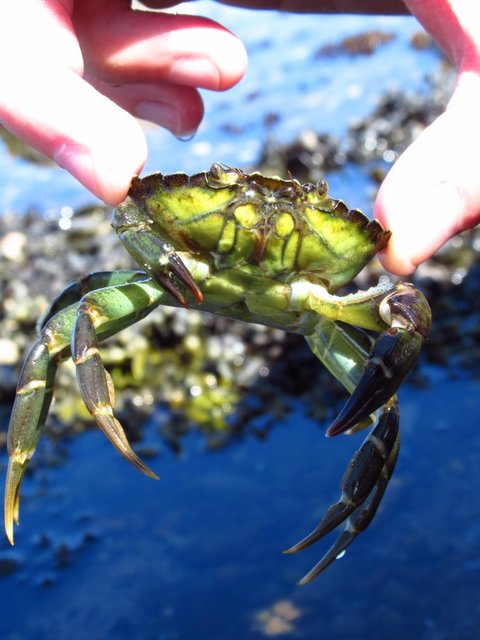 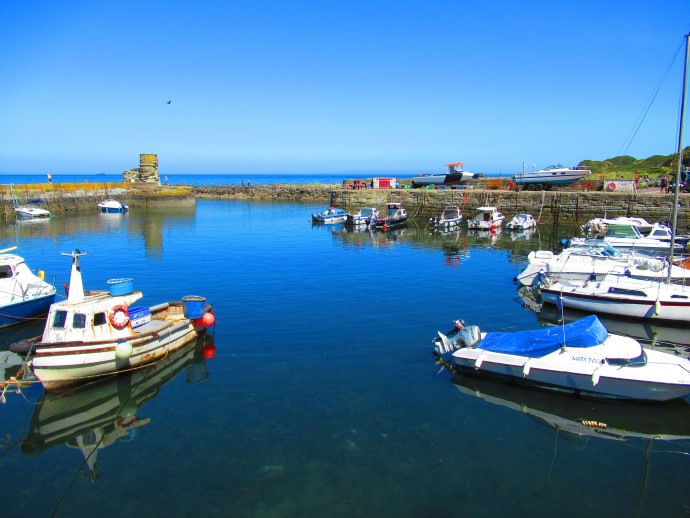 Dunure has a pub serving food - possibly an ideal spot to break your journey, but we'd left our wallets behind! Or head a few minutes further along the coast to the impressive ruin of Dunure Castle (photo from 2016): 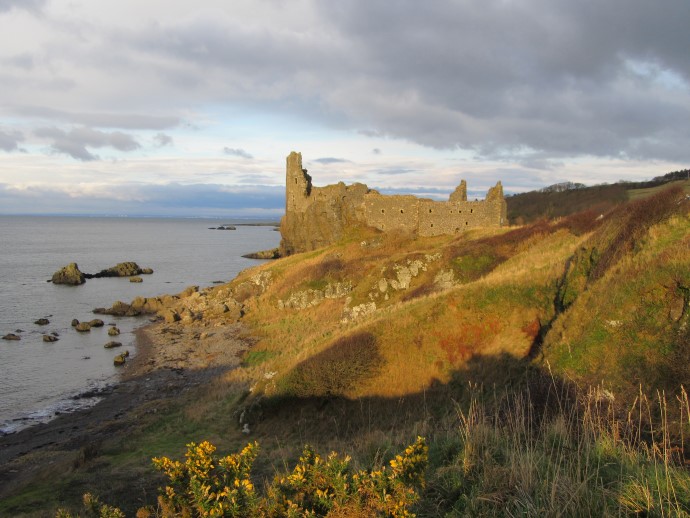 Ascent has been negligible so far, but it's finally time to start climbing. Along the pavement north-east out of the village first, crossing the A719 at Fisherton and continuing on the track opposite. Turn right at the T-junction, then continue until a signposted track on the left before you reach Dunduff Farm. The lower part of the track isn't marked on OS maps, but it's there: 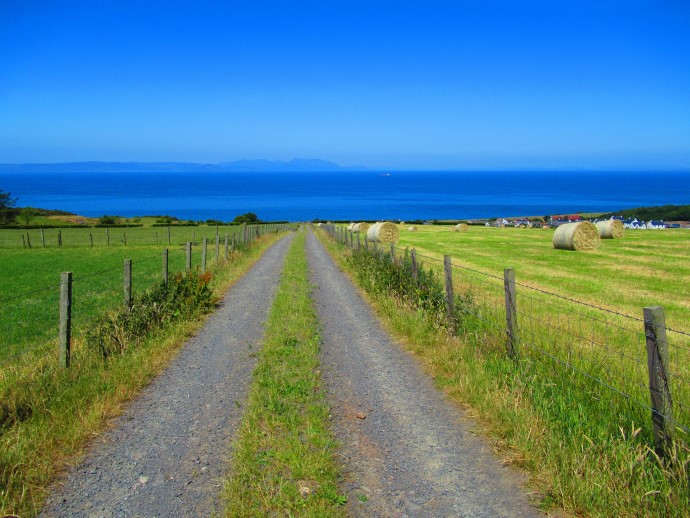 Hot work this part, made worse by a few annoying clegs. And a large herd of cows blocking the track to divert around - fortunately the fences were easy to scale. The track continues upwards until the edge of some trees where it forks - keep left to head along the base of the trees. Soon the track fades, but continue east in the direction of Brown Carrick Hill. A narrow band of more trees running north to south appears to block progress, but you can either head straight through them (two fences to climb and pathless, but very straightforward) or use a firebreak to the right. Thank goodness for the shade!

Either way, you're soon out the other side with the trig point 500 metres or so further on. 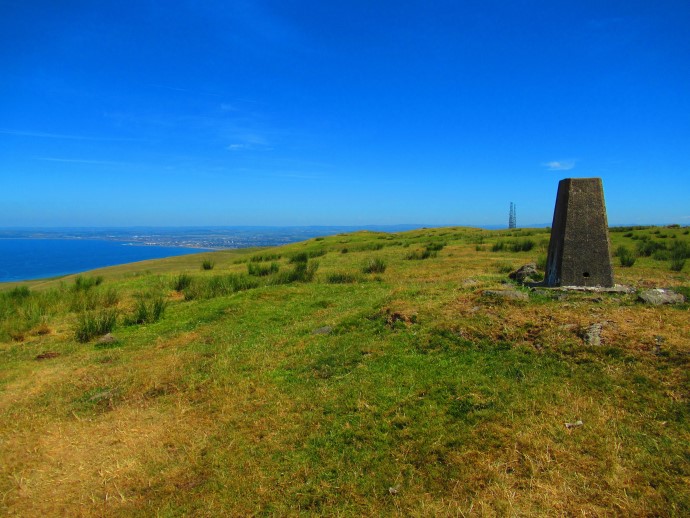 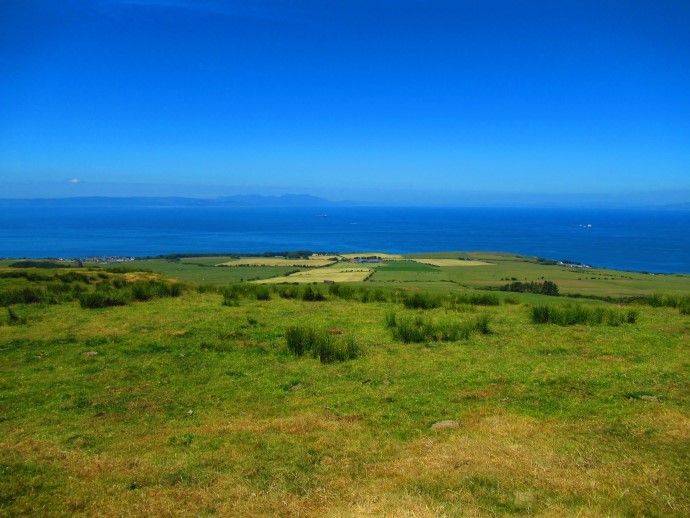 Ailsa Craig - we'll get there one day! Next, continue east towards the obvious masts, with traces of a path but mostly across easy grassy ground. There's a gate to pass through at the low point between the two summits. 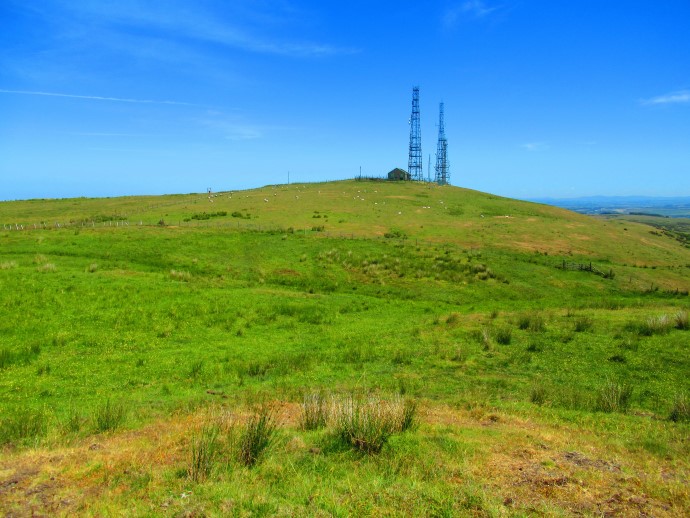 This eastern summit is lower but has fine views over Ayr: 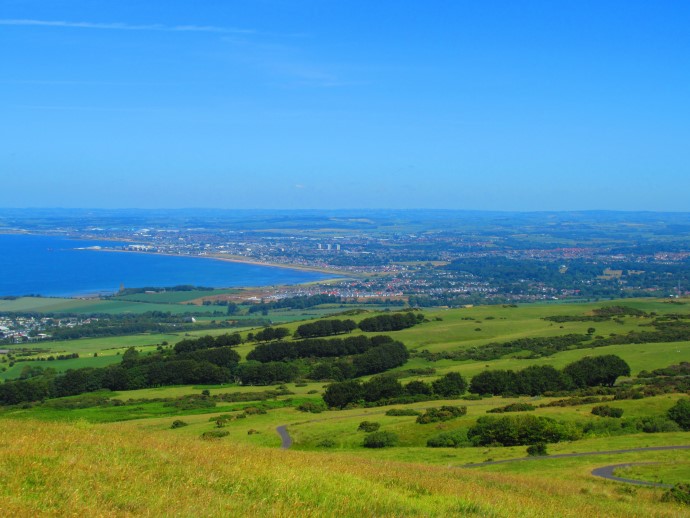 There's a tarmac road from here onwards, but a better route (and easier on the feet) is to follow a very faint trod east (i.e. further south than the tarmac track) along a broad ridge until it reaches the hill road near the 198m viewpoint sign marked on OS maps. Turn left here and it's an easy downhill plod all the way back to the A719 near the start. 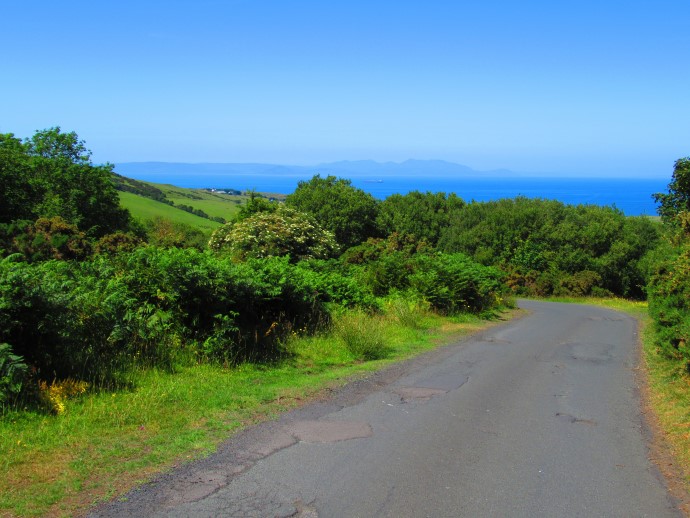 Probably one of the most interesting hill walks we've done in Ayrshire, and I'd certainly recommend this circuit as a meatier alternative to the out-and-back route!

Great work denfinella; lovely photos as always - this hill has really gained traction report-wise since 2016. Had I not walked in from Ayr I'm sure I would have tried to attempt something as scenic as your route. It's a spectacular viewpoint, and Dunure is wonderful too (especially their ice cream!)

Thanks Ian! It's a decent little hill.