This is a short report, however I felt the need to post it as someone did the same walk 2 days previous in totally different weather.
We started at the Visitor centre carpark. The centre is gone but they were busy working in the carpark area.

Myself and Dougie and the dog made our way along the usual path which was frozen solid to the first hill gate. Then we hit it. Snow and wind. The snow was knee deep and I kid you not, waist deep in places with a wind that cut you to the bone (Windproofs on). We followed the general direction of where the path was, I say general as we couldn`t see the terain itself, so rellied on the map and the fact Dougie had been there before many times.

When we got to the top of Bein Ghlas which was definately the hardest due to the snow, we were met by a member of the mountain rescue, he was checking we were kitted out appropriately because of the bad weather. He told us that he had just advised 2 french tourists against going up Tarmagen, who went anyway. They were dressed in jeans, rain jackets and Adidas Samba`s. Why ?

Anyway we then made our way to Ben Lawyers, this was mentally difficult, as we knew where we were heading and how far etc we had gone and had to go, but all around was white. We saw what we thought was a path in the distance only to realise that it was a rock about 6 feet in front of us.

Then we suddenly came across the summit.

Due to visibility being extremely poor, we decided against An Stuc. We decided instead to have lunch sheltered from the wind and drifting snow then head back.

Our foot prints were gone as the drifting snow had covered them all up and we couldn`t see more than a few feet in front, so it was caution and the GPS.

I have to say though, while conditions made this difficult it was an amazing walk. I did manage a couple of photos. We managed this in 6 hours 20 mins, probably 4 hours of that was the first slog in knee/waist deep snow. Looking across to Meall Corranaich Ben Lawyers and a frosty dog Wow. Amaaaazzing conditions. I was thinking about doing this in the next few weeks. Cramps and ice axe I think

my goodness, i didnt realise there so much snow!!! great pics

Nice one Si. Plenty snow there! Have yet to find myself in it this year...wont be long!

Did the same walk two weeks ago and thought that the ice and layer of snow was bad that day but this is incredible. Well done for keeping going but glad you didn't venture to An Stuc. Great photos, especially the last one and no problem for the dog

Superb conditions for the time of year. Shame about the clag but the snow looks excellent.

I think it's a bit scary having quite so much snow at this time of year myself - reminds me of all the dire warnings about climate change and us getting a new ice age if the Gulf Stream switches off. Surely it's not normal even up there to have sooo much snow in November?? Is it?

When I was a lad Nov-Jan was Winter, Feb - Apr Spring, May - July Summer (ahhh those long hot days ala1976) and Aug-Oct was Autumn. All I wish for is distinct seasons instead of wet Jan - Dec

I'm afraid I preferred the warm and wet myself - much cheaper to keep warm - didn't have to spend millions on your gas bill each year. But like you say, the summers used to be summers which they aren't any more. I could probably stand the Arctic winters if we got some hot months in the summer. But I wouldn't say it was normal for so much snow in November even if November is officially the start of winter. You surely don't get that much this early normally do you? 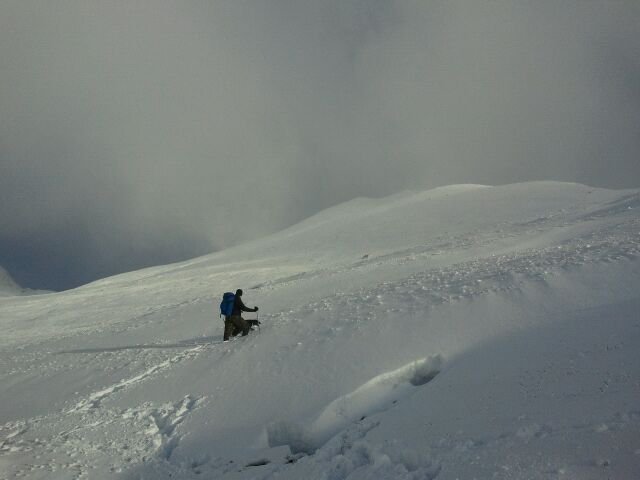 On the upslope through frosts and snows and gorgeous hills through to Spring.

Well it certainly felt like an ice age up there, I did consider fashioning some kind of sled for the dog to pull me back down in, but she wasn`t up for it.
The dog loves the snow, this brings her total to 14 Munro`s.
I don`t recall the winter of 1976 too clearly, thats when I was born

But being from Helmsdale originally I recall that the seasons were when they were supposed to be. Now in Livingston we get all the seasons in one day every day.

I might advertise walking in snow on the sky fitness channel, it`s a definite thigh burner. Feel the burn.

mountain coward wrote:I'm afraid I preferred the warm and wet myself - much cheaper to keep warm - didn't have to spend millions on your gas bill each year. But like you say, the summers used to be summers which they aren't any more. I could probably stand the Arctic winters if we got some hot months in the summer. But I wouldn't say it was normal for so much snow in November even if November is officially the start of winter. You surely don't get that much this early normally do you?

There isn't a 'normal' - it varies it every year. Last year, despite the long winter, the snow didn't come until very late on. I can certainly remember wading through ankle/knee deep snow in early to mid October some years, but the whole lot quite often gets washed off before christmas. I think there are cycles of sorts - the last couple of winters have been good, but 2006/07 and 2007/08 were fairly lean in comparison. The first winter I lived in Scotland (2000/01) had almost as much snow as last winter.

Climate change could be having an effect on the randomness of the weather, but you really need to look at the variations over much longer periods of time to make any worthwhile judgements.