This walk for me really started from Oban at 6am. Having packed the night before I threw my kit in the car (remembering the boots this time!) and headed off about 6:15 to catch the train from Upper Tyndrum train station. I was hoping there would be space for me if I got there a bit early. Luckily there was one tight space on the end and just parked without going down the embankment behind. With a bit of time to kill now I realised there was no toilet at the train station although there was plenty locked doors and cameras trained up and down the platform! The sleeper finally arrived just a few minutes late. Not seeing the seated carriage I asked the woman behind the counter if I could sit in the buffet carriage and was met with an emphatic 'no' wagging her finger in the opposite direction. The blacked out door I thought was a dead end turned out to be the only seated sleeping car full of bleary eyed passengers. I found a seat and tried not to poke people with my sticks. After an hour the train slowly pulled in to Corrour station which is quite impressive given the size of it. Once it turfed out it’s five passengers it disappeared again swallowed up by the Scottish landscape. The track to Loch Ossian hostel was clearly marked so I quickly donned my pack and headed in that direction although I seemed to be the only one. I got about half way and met one of our walk highland party coming back to catch the next train south looking for better weather! He informed me the others I was due to meet had just left so it shouldn’t take long to catch them up. I quickened my pace to the hostel and arrived to quickly drop off my overnight stuff and sign in. The warden then proceeded to tell me a long and complicated story about what had happened the night before when 3 women had signed in as men and upset her whole system and a few people besides. I didn’t realise this was sneaky practice for some who didn’t get a bed in an SYHA Hostel. By the end of this story I realised I would now be quite a bit behind my companions so when I finally got away I couldn’t see anyone on the path ahead. I thought maybe I’d catch them once I was on the hill at the first cairn so I crossed at the crossroads and turned left onto a smaller path which lead up to the higher track which leads straight up to Peter’s stone. As the path rose higher I still couldn’t see anyone ahead then all of a sudden there they were as I rounded a corner. The reason I hadn’t seen them before was that they had continued on the track round the loch then had to take a detour uphill through the heather when they realised they were on the return route. It was a relief for me as it meant I could get my breath back and slow down a bit. It was great to have some company on the hill and soon we reached Peter’s stone and a fainter path heading up on to the top of Meall na Leitire Duibhe. 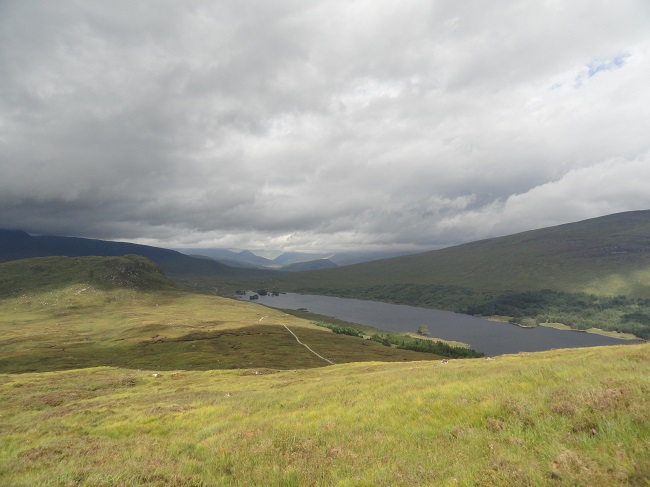 Looking back to Loch Ossian 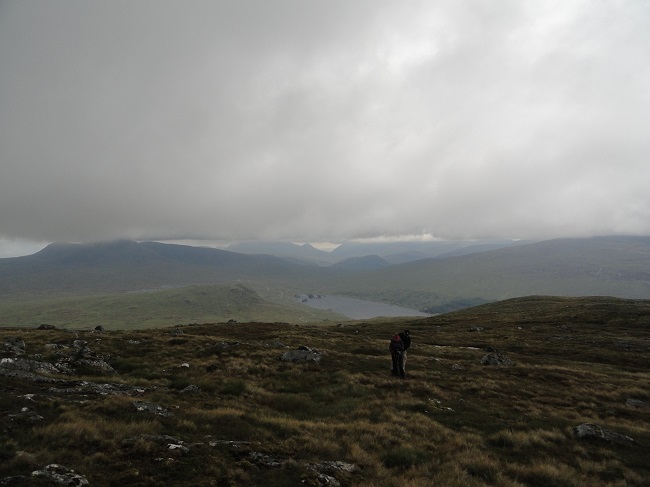 The rain coming in

The mist was just starting to come in as we headed along the ridge to Carn Dearg. I was glad that Jules had her GPS which saved me getting my map and compass out in the wind and intermittent rain. I decided to put my waterproofs on early on although I felt a bit hot in them as we climbed towards the summit (though later it turned out to be the right decision). As we got to the top it was in thick mist but every so often it would lift just enough to see a bit of a view. As the cloud dropped again we decided to descend the steep slope on the other side a little to eat a bite of lunch. 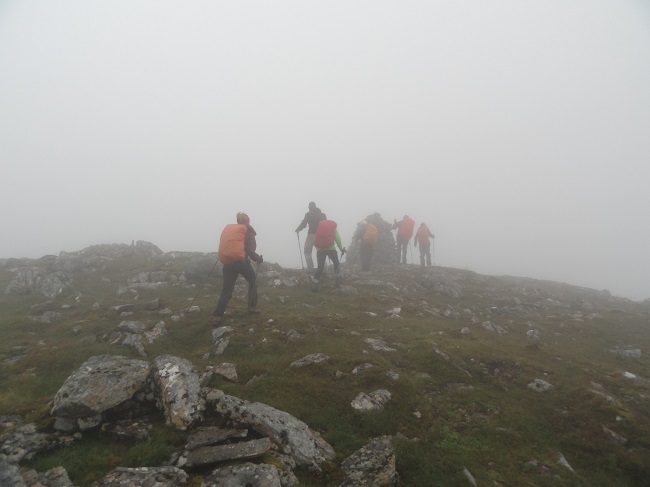 Reaching for the summit of Carn Dearg 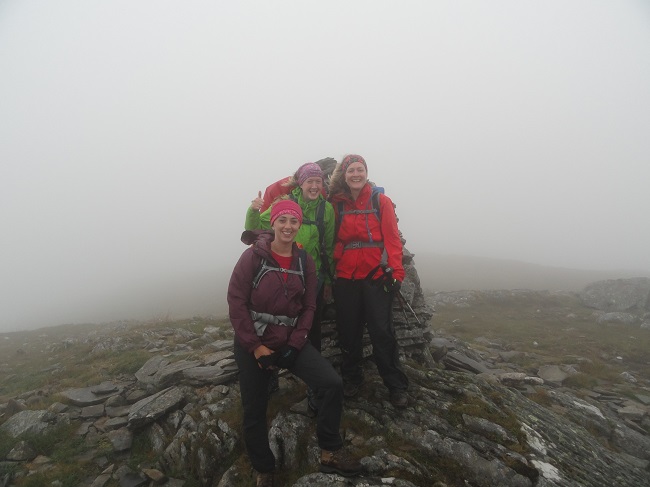 Pleased to make it to the first top 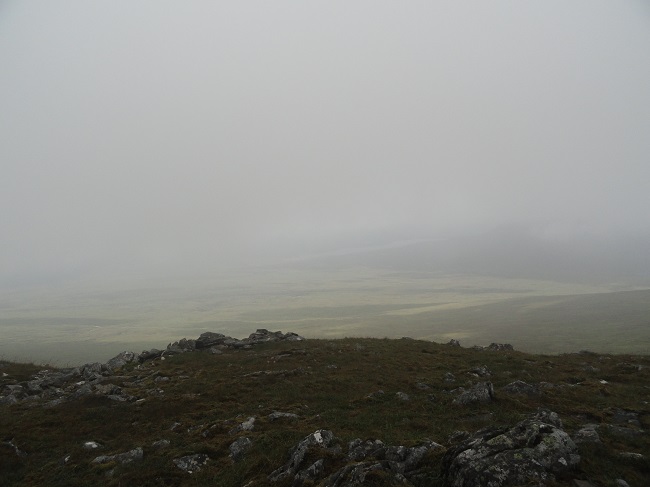 View through the clouds

We didn’t stop for long preferring to get the steep descent out the way before starting to rise again towards the summit of Sgor Gaibhre. By this time the rain started hard turning to hail. Everyone was head down following one behind the other. If I was on my own I think I would have given up by this point, it really was getting miserable and the wind had really picked up. All of a sudden the clouds went really dark and there was that eerie silence. Jules broke the silence to utter what we were thinking. Lets get off this hill (knowing the forecast had been for thunder and lighting!). Luckily we weren’t far from the top and the silhouette of the Sgor Gaibhre summit cairn came out the mist. We barely stopped to touch the cairn and just kept going over the other side. 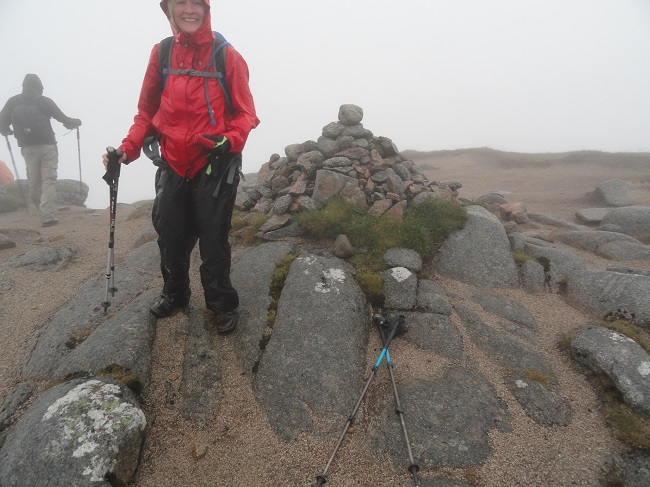 wet and bedraggled on the summit!

The cloud seemed to lighten again at least but the rain continued. We ended up going over the last top not wanting to look for the alternative route in the thick mist. As we seemed to be veering off the path by now I took the map and compass out to double check the route and between the compass and gps we came back out the cloud roughly back on track again although there was no track really to speak of. It was good to be able to see where we were going by now and we made a B-line for the edge of the trees. The rain stopped but by now my companions had soaking trousers. Mine were only dry under my waterproofs because I was wearing shorts. A smart move I realised. 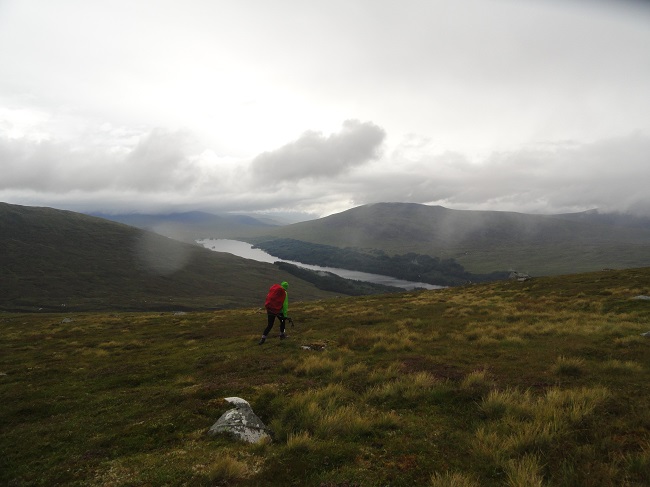 down through the rain

The descent through the heather back to the main track seemed to take for ever as we slipped over roots and bog cursing as we went. It was a relief to finally be back on a track and by this time I realised I was starving so finally ate my sandwiches as we hoofed it back along the track towards the hostel. There were beautiful views back along the loch and the wind had died down so much the midges were then out in force. Everyone was relieved when we made it back to the hostel and I was very grateful to Jules and her gps which got us up two munros I would never have completed on my own in such horrendous weather. 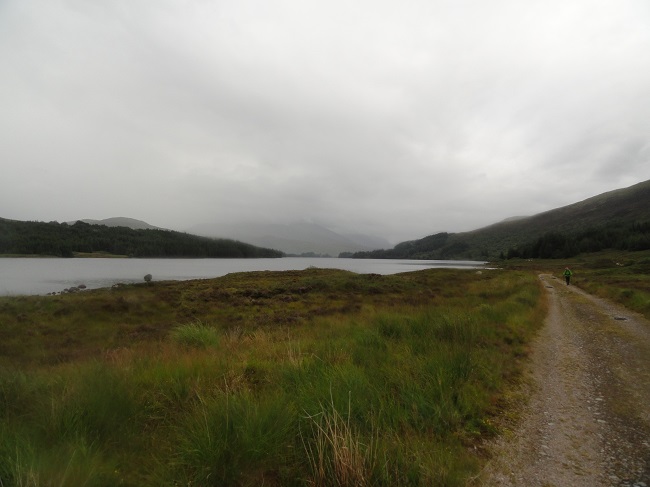 Back along the loch side

After drying out at the hostel we rewarded ourselves with a trip to the Corrour station restaurant and some gourmet food. I was reliably informed by my walking mates that it was 100% better than the night before with bigger portions and tastier meals so who knows what happened to the previous chef. I also got the rest of the story about the previous nights disruption, gender swapping guests and apparently a guest who had not even booked and expected a bed! All part of the excitement at a remote hostel. My evening was much less disruptive thankfully with card games and story's of the days hills.

Ooooh what a soggy day. glad you got a bed for the night, sounds like organised chaos though lol.
I was looking forward to revisiting these hills as i literally ran round them on my way to a Ben na Lap compleation, but,,must say,,i wouldn't have enjoyed that weather lol, another time maybe.

and had an awesome day out dispite the weather haha..

until our next adventure....