Since I had a night at the Loch Ossian hostel I was going to do Beinn na Lap on Sunday which would mean getting the 6.25pm train back to Tyndrum unless there was any way I could catch the 12.30! The weather forecast was not the best, high winds for the morning and rain for the afternoon. I thought I’d wait to see how I felt the next day. I got up at 7am in the end and decided the weather wasn’t looking too bad outside. Although the cloud was still racing across the tops the wind seemed like it was starting to die down. I packed up my gear in two bags (one for the return) checked the route and chatted to some of the hostellers who were starting to stir. I left the hostel not long after 8 and hoped I’d be able to catch the earlier train. 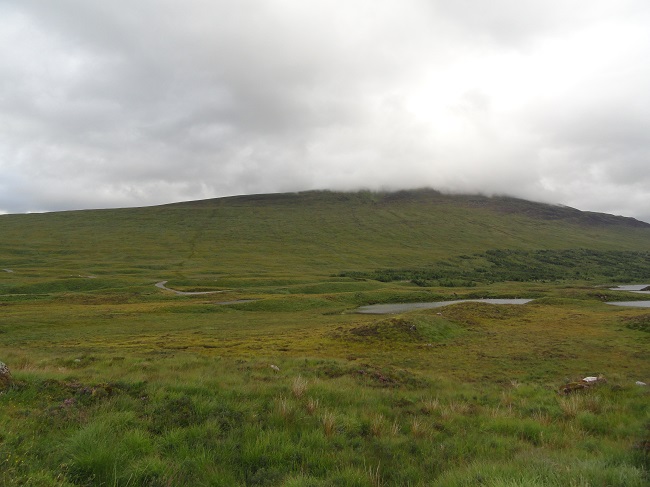 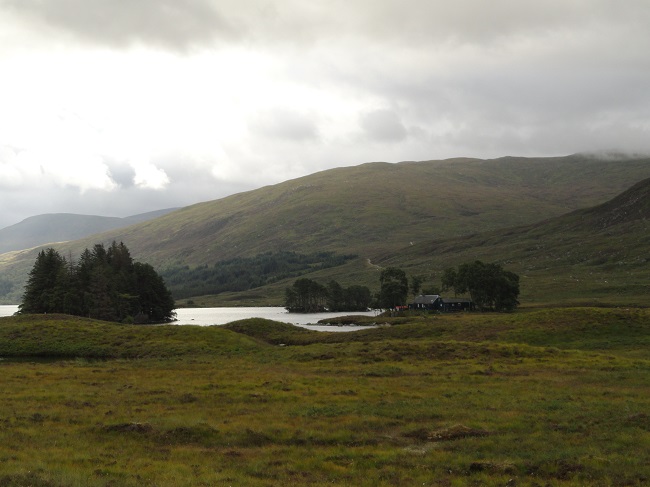 Looking back to the hostel The path up to the ridge

The path was straightforward firstly taking the track back to a fork then turning as if to go round the loch. Just as it bent around the corner a smaller path went directly uphill in a straight line showing a wet trail as it went. It was a little steep but a slow and steady pace ensured I made it up on to the back of the ridge in less than an hour. As I reached the ridge I was a bit more exposed to the wind but I tightened my hood around me and kept going. By this time there were great views down Loch Ossian and the cloud was lifting off the tops that I had done the previous day. I took a bearing just incase as the cloud seemed to rise and fall with the wind. 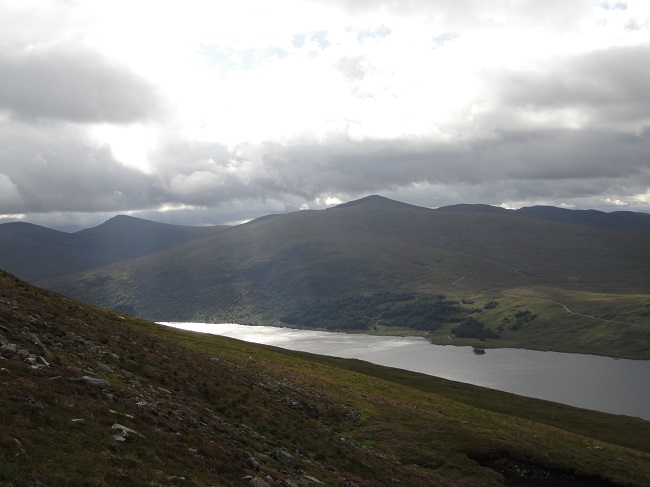 The ridge was much faster going as it was a lot less steep and I could still make out a faint path. I came up to a shelter just on the edge of the ridge looking down. By this time the wind was really picking up again to about 30-40 (as predicted) and the cloud by now was only just above the top. The cairn came into view and I reached the top only an hour and a quarter after I had started. 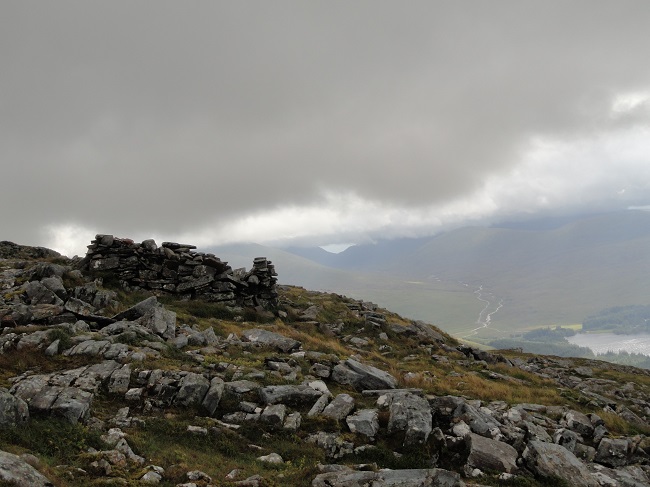 Cairn shelter on the way to the summit 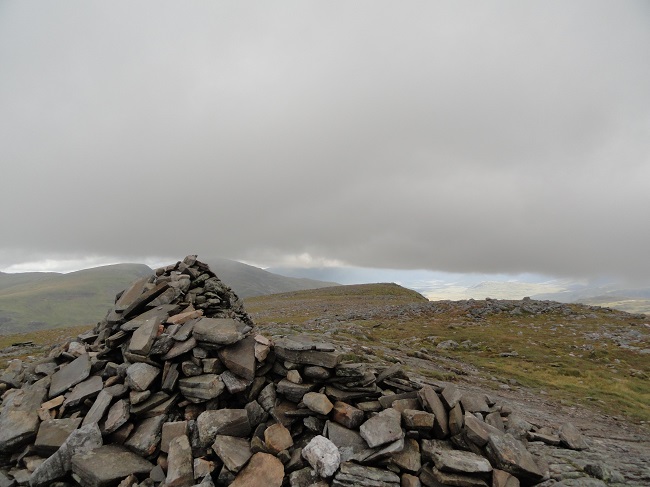 I was going to stay and enjoy my sandwiches in the shelter of the cairn but the cloud came down and I was immediately in thick mist. I started to walk back but the wind meant it was getting pretty cold so I stopped at the next shelter to layer up which became difficult in itself trying not to lose my jacket. Compass in hand I raced on down the ridge and soon came out of the cloud again. The mist closing in 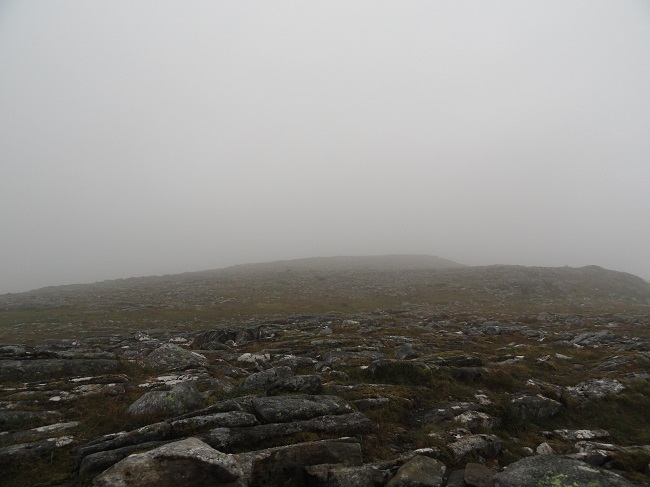 I decided just to keep going. I looked out for a small cairn I’d seen on the way up which showed the path veering off to the left down the steep section. When I came to this I realised I was on the right track back down the steep hill. Being a very grassy track it was nice and gentle on the knees although a bit boggy further down. 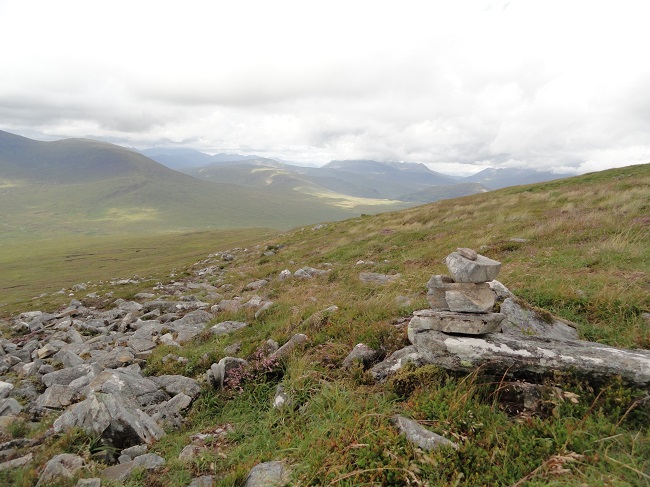 Not long before I got to the bottom I passed 2 walk highlanders on their way up wanting to miss the wind they were taking their chances with the rain! I quickly walked along the track back to the hostel and when I looked at my watch realised I’d still have time for a leisurely cup of tea before the 12:30 train back. I picked up the rest of my gear and headed to the train station where some of the hostellers were already waiting. I enjoyed a deserved cup of tea as I watched the weather now closing in and was relieved that I was heading back. The rain started as we got on the train. I took one last look at the hills and swore I’d be back for the Corbett still looking splendid in the changing weather. What a fantastic weekend.

Re: Beinn na Lap - between wind and rain

Smashing hill,,,testing conditions though,, ive had 3 na Lap days, and all good lol. It must be you haha

Well done getting the early train too.