We're a bit lazy to do the entire West Highland Way, but the stage between Rowardennan and Inverarnan along the east bank of Loch Lomond has been beckoning for a while now. Finally we got round to it with the help of public transport last month.


Loch Lomond linear.gpx Open full screen  NB: Walkhighlands is not responsible for the accuracy of gpx files in users posts

A bit of planning required to do this stage as a day walk. Parked in Tarbet and took the (pre-booked) 8.45am waterbus to the youth hostel at Rowardennan at the start. A bit midgey in Tarbet (and especially on the open ferry before it departed!), but fortunately this didn't set the scene for the rest of the day! Some sunshine at times today and the rain showers stayed away, though it was often cloudy. With temperatures in the high teens it was happily a bit cooler than it has been for much of the summer. 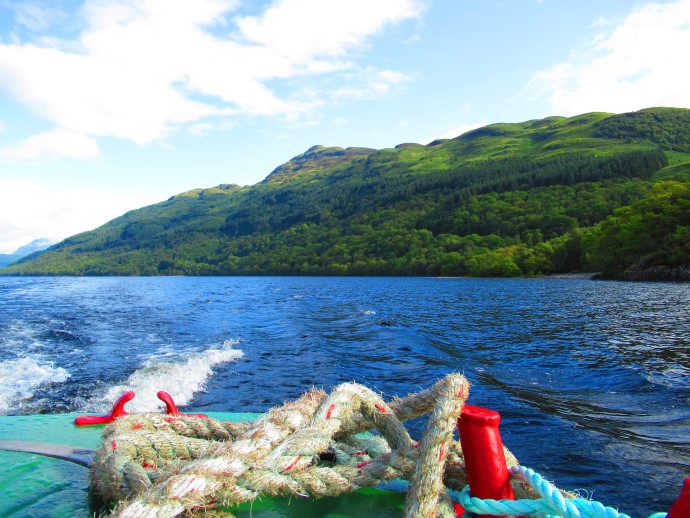 Once on the east bank, the WHW follows wooded tracks for a couple of miles before transferring to a path along the shoreline. Lots of huge brown slugs out on the track this morning. 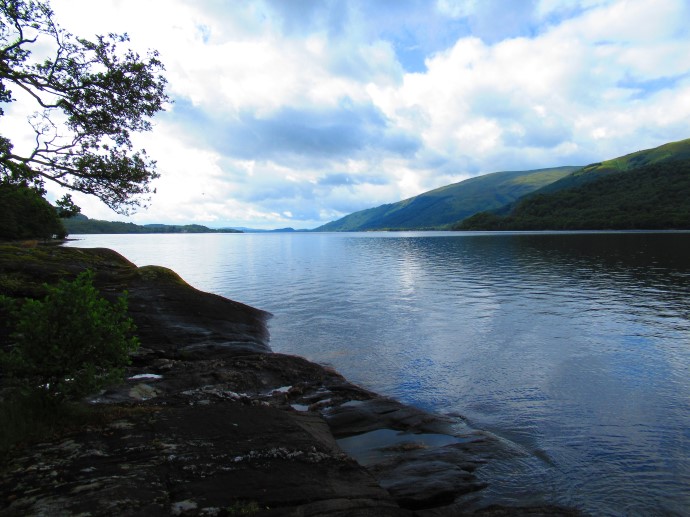 Generally good, smooth paths at first, though it doesn't last! 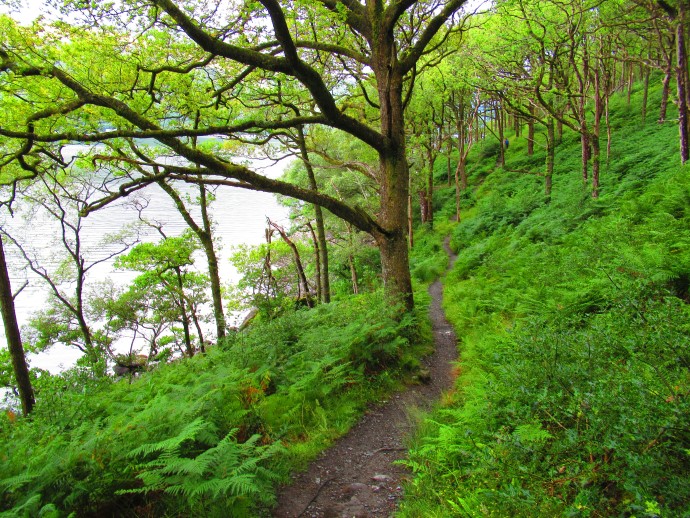 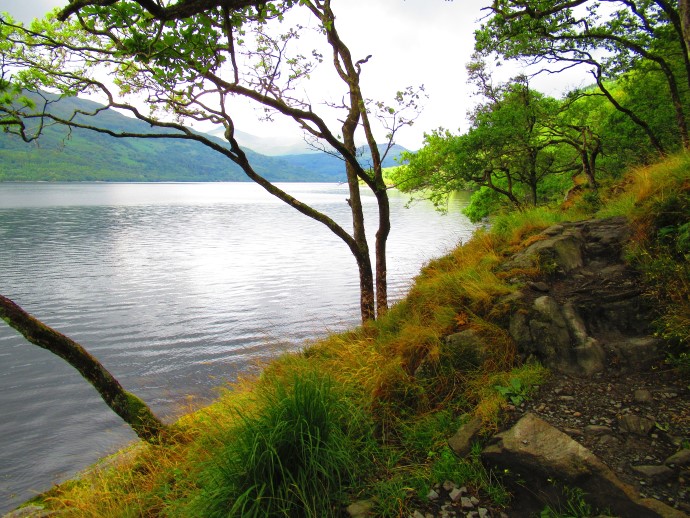 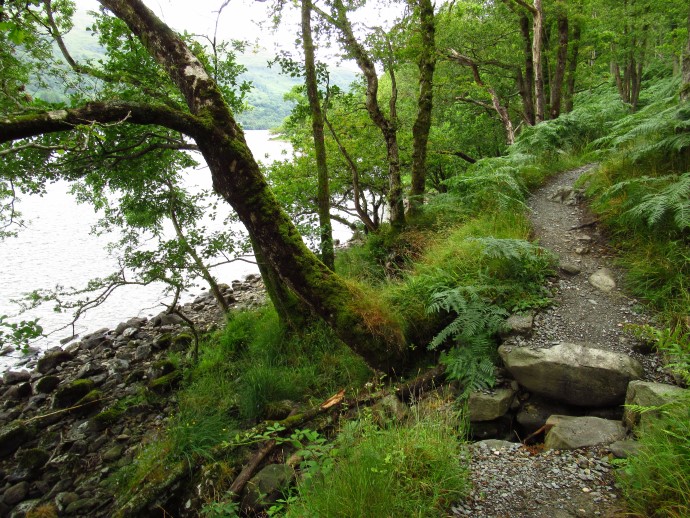 The Cobbler through the trees: 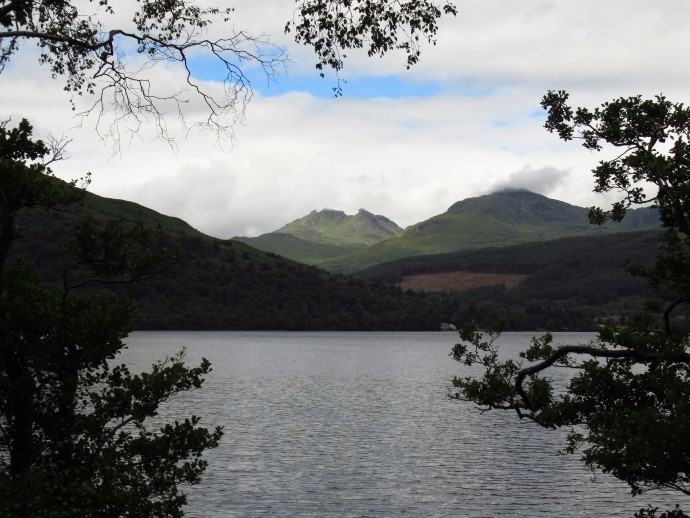 Old fire - one big disappointment about this walk was the amount of rubbish and discarded camping gear at each little bay. A real shame that some people can't be bothered to remove their own gear after managing to bring it in. The scenery is otherwise beautiful throughout: lovely and lush, with quite a wild feel on some of the more isolated sections. 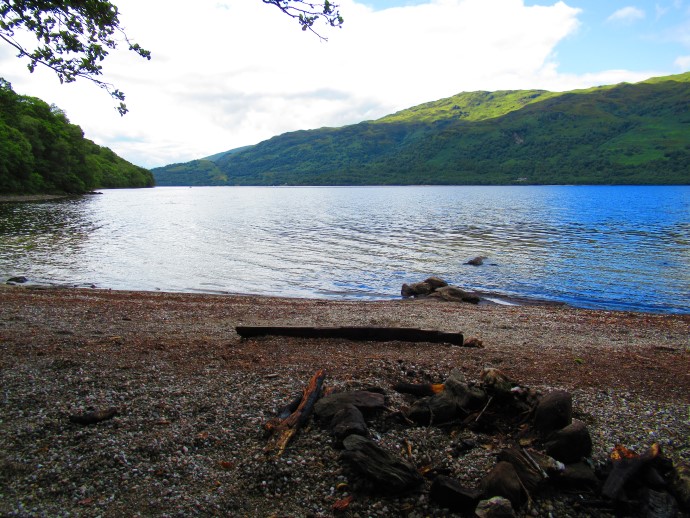 Rowchoish Bothy (quite a bit of rubbish left in here too): 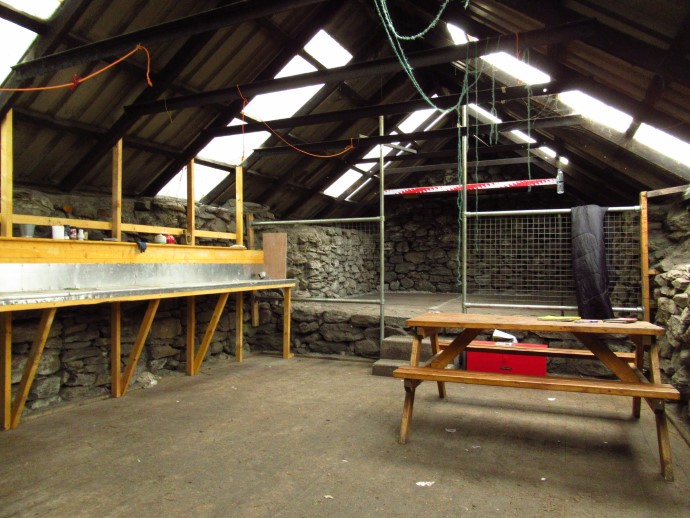 Scenery beyond Rowchoish (there's also a seasonal cafe at Cailness): 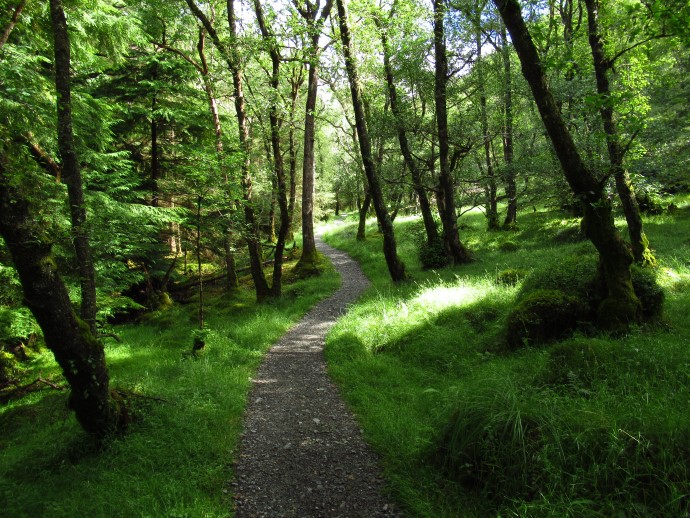 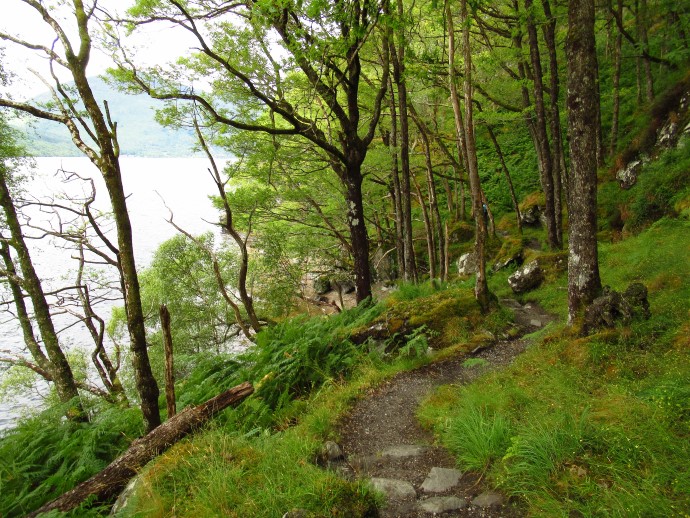 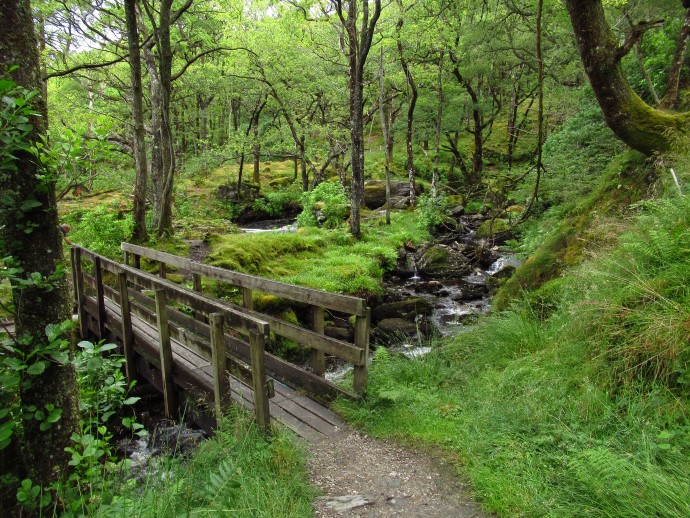 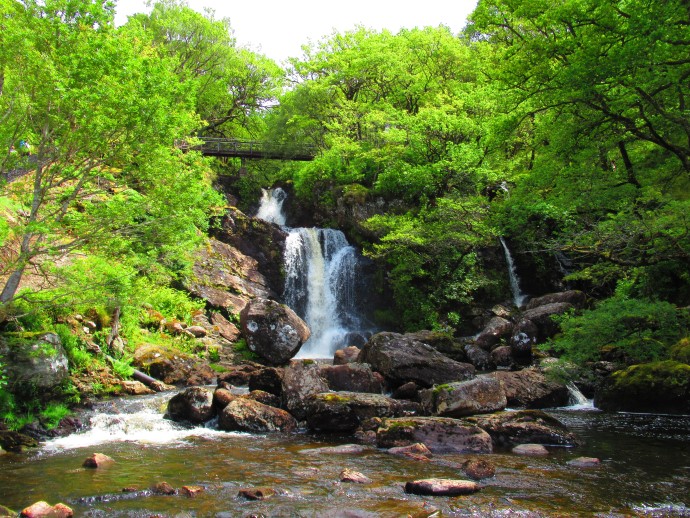 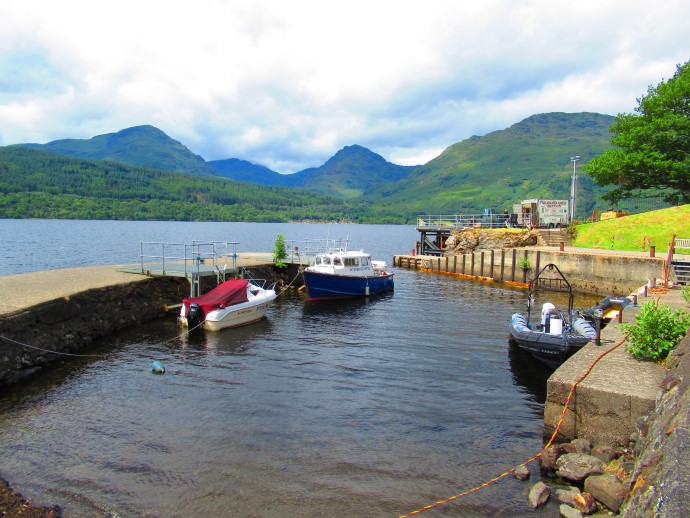 Beyond Inversnaid the path gradually gets rougher again: 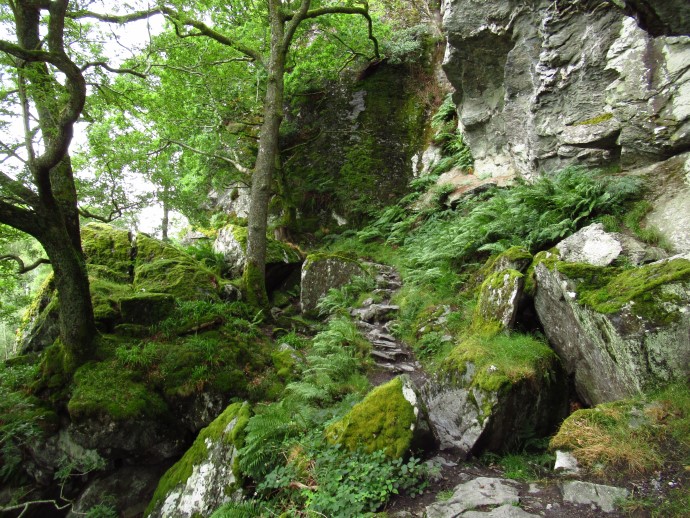 Eventually a sign shows where to turn off for the detour to Rob Roy's Cave. Getting into the cave requires a bit of easy scrambling over boulders, and the path isn't particularly clear. Look out for the letters in white paint pointing to the entrance! View from inside the cave - which is more just a crack between massive rocks: Beyond the cave, the path continues... View ahead to Island I Vow... ...and across to the new road at Pulpit Rock: Over a very small hill, followed by a short descent to Doune Bothy: 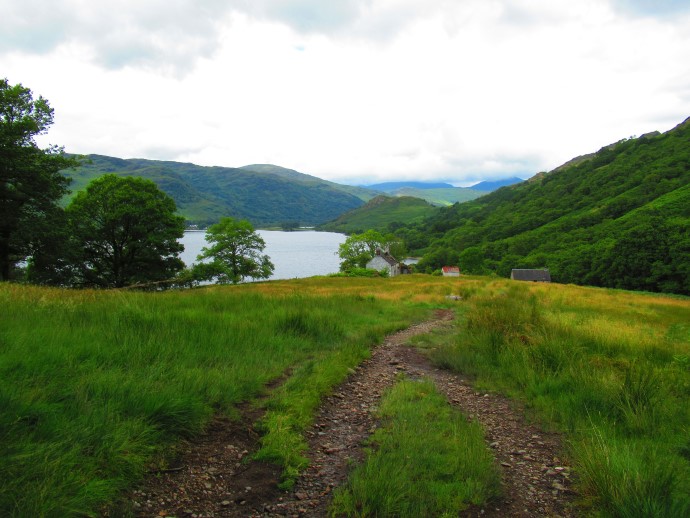 More of the same, beautiful lochside scenery for the next mile, before a slightly bigger climb as the loch is left behind beyond Ardleish. Looking back: 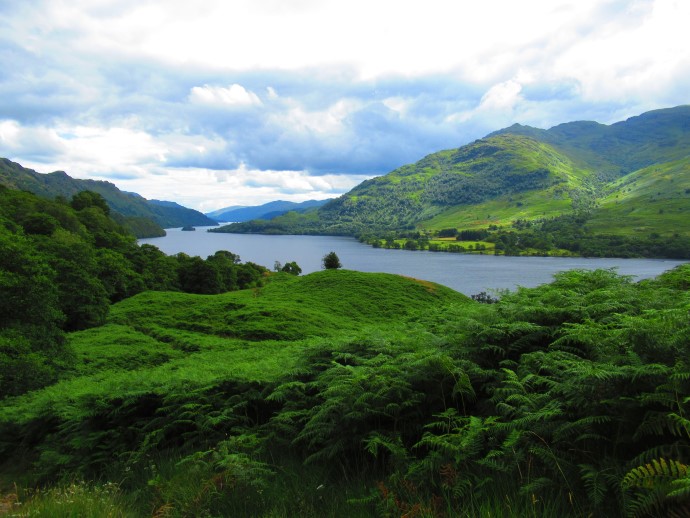 A long, gradual descent to Beinglas Farm where we followed the familiar track around the edge of the farm to the A82 and Inverarnan. Arrived with just over half an hour before our (again, pre-booked) bus back to Tarbet - managed not to be tempted by a drink!

This section of the WHW is well worth the public transport hassle if you're not doing it as part of the whole trail. We might be tempted to try another stretch at some point... any suggestions?